Accessibility links
Review: 'Cheer' Puts The 'Ow' In 'Powerful Docuseries' The Netflix series Cheer may not be quite as cleanly inspirational as it intends to be, but it tells a gripping story of a coach who knows her team will give until it hurts if she tells them to. 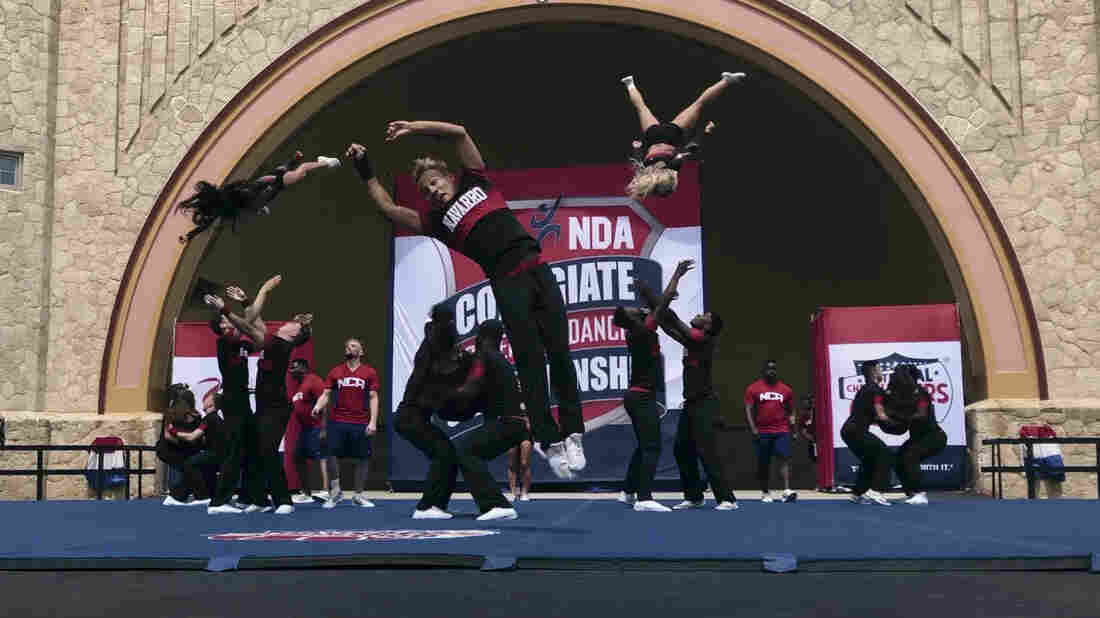 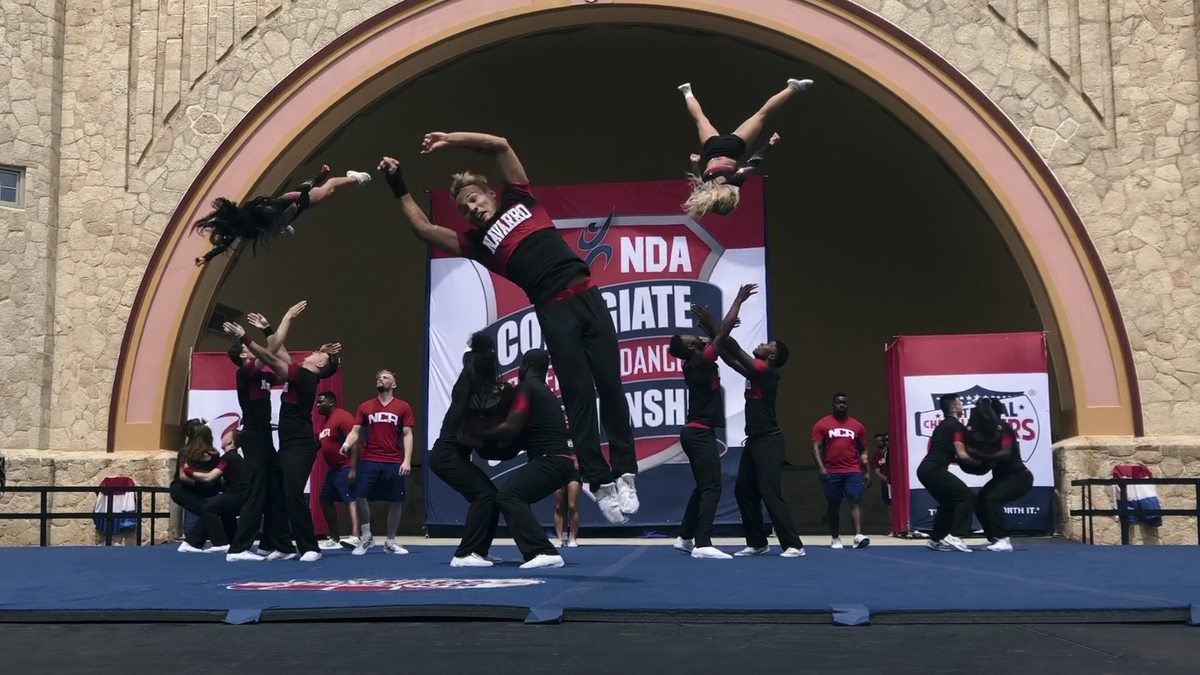 The Navarro College team competes at the national championships.

One of my best teachers told me once — warned me once — "Good teachers want students, not disciples."

I don't remember what the context was, except that he wasn't cautioning me about anyone in particular. He was just speaking about teaching and expectations, and about the dangers of a cult of personality in the context of education. I thought about this statement a lot while watching the six-episode Netflix documentary series Cheer.

The series follows the competition season of the cheer team from Navarro College in Corsicana, TX. The community college may not be a household name to most, but it is to people who are extremely into competitive college cheer. Navarro has won a slew of national titles under the leadership of its coach, Monica Aldama.

If you don't know a lot about college cheer, the show does an exceptional job showing just how athletic and physically demanding it is. The statistic flies by that cheer causes young female athletes more catastrophic injuries than any other sport. (Catastrophic injuries include things like head injuries and spinal cord injuries.) Yes, most of the time, when young women are thrown up into the air, twisting and spinning, they are caught. But when they aren't, it can be disastrous. And even when they are, the series repeatedly demonstrates the aching ribs that result from thunking down onto a bed of other people's bony forearms, as well as the way those forearms can swell from catching (and catching and catching) falling bodies.

But what the team is able to accomplish with precision, timing, talent, practice and pure muscle and speed is hugely impressive. It's tempting to try to describe it through comparisons with other activities — it's like gymnastics, like acrobatics, like tumbling, like Cirque du Soleil — but really, it's only like cheer. Elite cheer is its own thing, which really must be seen to be understood, complete with its grunts and falls and elbows to the face.

The hook of Cheer is how the team members enthusiastically undertake these trials in order to be the best and to win the big competition in Daytona Beach at the end of the season. But it's also about how much they want to please Aldama, who encourages their tendency to think of her as "a mom," someone they are desperate not to disappoint. We meet students who have had few champions in their lives, hard circumstances, limited options — until Monica gave them a chance to be part of something, to succeed.

But aren't there risks when you give a stubborn, highly competitive, extremely driven coach close to complete authority over a bunch of kids who see her as their only ally, and who feel obligated to satisfy her and the team at all costs while performing in a potentially very dangerous sport?

One risk, of course, is injuries. While Cheer begins as a tale of hard training, it's hard not to see it, as the season progresses, as a story of attrition. Girls — because it's girls who are typically thrown into the air, lifted, dropped — hurt their arms, hurt their shoulders, get concussions. Boys throw their backs out, screw up their wrists, blow a knee tumbling. None of it makes Monica hesitate or wonder whether she's pushing them too hard. If a girl hits the ground instead of being caught, the entire team does push-ups as punishment. But who is responsible for asking whether a cascading series of injuries that ultimately endangers the team's ability to compete at all has something to do with the judgment of the coach? Not the team doctors. Not the students. And apparently, not anybody affiliated with the college.

Doctors To Vote On Whether Cheerleading Is A Sport

The marketing of Cheer suggests that if director Greg Whiteley (Last Chance U) sees the moments of bleakness within this story (and it's hard to imagine he doesn't), Netflix's marketing chose to ignore it. The description of the show says: "The stakes on the mat are high, but for these athletes, the only thing more brutal than their workouts and more exceptional than their performances are the stories of adversity and triumph behind the team members themselves. Over the course of six episodes, viewers will join the Navarro College cheerleaders as they face injuries, sacrifice, personal setbacks and triumphs, all leading up to one nail-biting and adrenaline pumping final competition at the National Championship." Which is funny, because to me, it was a story about how dicey it can get when a coach seems to perhaps want precisely disciples — and has control over a bunch of young athletes' safety.

Even understanding that elite athletes have expectations that can look strange from the outside, I did a full-body cringe at a sequence in which Aldama forces a guy to practice who's hurt himself competing in an outside event she told him not to attend. Despite the fact that his back is in terrible pain, and despite the fact that he's responsible for catching falling human beings, she makes him practice to teach him a lesson about obedience, as he crawls and winces and moans, eventually reduced to tears on the mat. And then he says this, while hobbling around the training room: "Monica's not even like a second mom. She's like a first mom." It's a pattern: no matter what she does that looks monstrous, the team never seems to have a negative word to say about her. And those who do are quickly brought into line.

Cheer raises a lot of interesting emotions about sports and athletes. I thought hard about whether I was seeing this differently because it was cheer. Would I feel like it was too much if it were football or basketball? Was I instinctively babying these athletes because of their sport? I don't think so. I can't imagine thinking it's good coaching to ignore an injury and expect someone to practice because you're angry about the circumstances in which the injury happened, and I shudder to think how it would look if he'd dropped someone — which looks perilously close to happening.

It's disappointing, too, that there's essentially no examination of one of the facts about the team that's blindingly obvious: a lot of the boys on the team are black, but the girls are overwhelmingly white. Particularly given a scene in which Aldama admits that she favors one girl over another to participate in a routine in part because she has "the look," there's a very big open question about what Aldama thinks "the look" of a cheerleader is, exactly. That question may have any number of answers, but not asking it — not raising it — feels like a missed opportunity.

It's certainly not all like this. There is, as the marketing promises, "adversity and triumph." An athlete named Jerry is perhaps the most purely appealing of the continuing stories, and watching precisely how he navigates Aldama's program and her manipulations is one of the show's most subtle but interesting angles. There's also a fascinating look at a young woman whose parents are making every effort to monetize her momentary fame as an elite cheerleader, given that, as everyone acknowledges, college cheer is the end of the road — there's no professional league to join. The glory you get now is the glory you are going to get. (As they explain, professional cheerleading is more dance than tumbling and stunts.)

Whiteley also has to be given enormous credit for turning a potentially documentary-killing setback into an asset when he's denied permission to shoot at the national championships the team has been heading toward all season. He both finds inventive workarounds and takes the opportunity to talk about how he was denied access, and the enormous power concentrated in a company called Varsity Brands, which has enormous control over cheer competitions — and was just acquired by Bain Capital. It becomes one of the strongest storylines in the series.

I found the series utterly engrossing, just perhaps not in the way its marketing suggests. I did see the hard work, the dedication, and the benefits of giving people a place to belong and to work hard. But I also saw something darker, something about which I felt much more ambivalent. With the students I liked, I found myself understanding why they were thrilled to be part of this program, and also feeling relieved when they survived it and left.