Accessibility links
Trump On Missile Attack: Iran Is 'Standing Down' The president said no Americans were harmed after Iran launched missile strikes against U.S. military forces in Iraq in apparent retaliation for the killing of Qassem Soleimani. 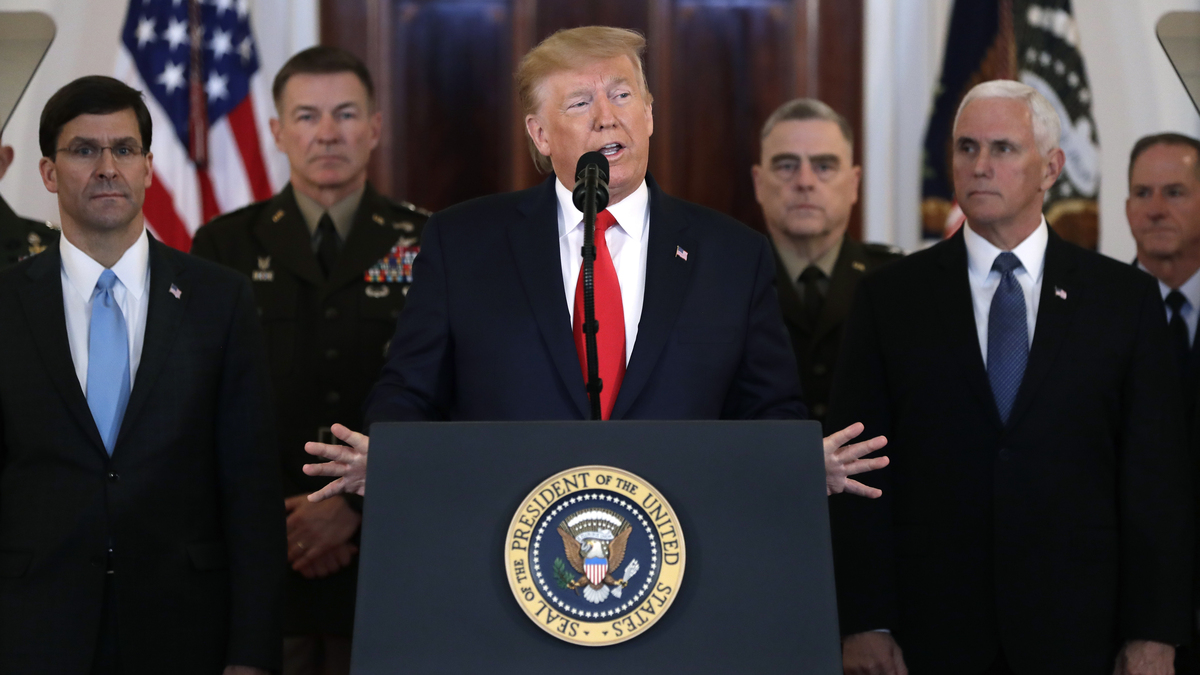 President Trump addresses the nation from the White House on Wednesday on the ballistic missile strike that Iran launched against Iraqi air bases housing U.S. troops.

President Trump said that Iran appears "to be standing down" after Tuesday night's missile attack in Iraq and that "the American people should be extremely grateful and happy no Americans were harmed."

Trump, in a nationally televised address from the White House, also announced a new round of what he termed "punishing economic sanctions" against the Iranian government. And he called on NATO to become "much more involved in the Middle East process."

Later in the day, Trump spoke by phone with NATO Secretary General Jens Stoltenberg. According to a White House statement, "The President emphasized the value of NATO increasing its role in preventing conflict and preserving peace in the Middle East."

The missile strikes against U.S. military and coalition forces in Iraq were in apparent retaliation for the killing of Qassem Soleimani, an Iranian military commander.

Soleimani "should have been terminated long ago," Trump said, calling him "the world's top terrorist."

House Speaker Nancy Pelosi, D-Calif., announced that the House will vote Thursday on a measure that would limit Trump's abilities to order a possible military strike against Iran. Democrats have argued that Congress should have been notified ahead of the U.S. strike that killed Soleimani in Iraq.

Trump essentially blamed the Obama administration, which reached an agreement limiting Iran's ability to pursue nuclear weapons in return for — among other things — billions of dollars of Iranian assets that had been held by the U.S., for the Tuesday night missile strike.

"The missiles fired last night at us and our allies were paid for with the funds made available by the last administration," he charged.

Trump withdrew from that 2015 agreement in 2018, and on Wednesday, he called on the nation's European allies along with Russia and China to do so as well.

Asked about Trump's allegation, former Obama Defense Secretary Leon Panetta told Here & Now, "I think the president, when he's caught in a corner, always winds up blaming President Obama for whatever's happening, but the reality is that this president does not have a clear or comprehensive strategy in dealing with the Middle East. It's obvious from his own remarks."

Relations between the U.S. and Iran have been fraught since the 1979 Islamic Revolution, but they have deteriorated sharply since the Trump administration withdrew from the nuclear deal.

Initial satellite images of Ain al-Assad air base, in western Iraq, suggested that Iran's strike targeted aircraft repair shelters and other such facilities.

It wasn't immediately clear what effect the damage might have on American military capabilities in Iraq, but the United States has other air bases and vast forces arrayed throughout the Middle East.

Late Tuesday night, Trump had acknowledged the attacks by tweeting, "All is well!"

"Assessment of casualties & damages taking place now. So far, so good!" he added.

All is well! Missiles launched from Iran at two military bases located in Iraq. Assessment of casualties & damages taking place now. So far, so good! We have the most powerful and well equipped military anywhere in the world, by far! I will be making a statement tomorrow morning.

Trump credited the dispersal of forces at the base "and an early warning system that worked very well" for the lack of casualties. A defense official told reporters in a statement that U.S. early warning systems "detected the incoming ballistic missiles well in advance, providing US and Coalition forces adequate time to take appropriate force protection measures."

"We do not seek escalation or war, but will defend ourselves against any aggression," he said on Twitter.

Before the attacks, he also told NPR's Mary Louise Kelly, who is in Tehran, that Soleimani's killing "amounts to war."

Wednesday's address followed days of tensions that began last week as Iran-backed Iraqi militiamen and their supporters targeted the U.S. Embassy in Baghdad, setting fires and damaging a perimeter gatehouse at the complex.

Days later, the U.S. killed Soleimani, who was visiting Baghdad, along with a senior leader of a Shiite militia group.

Earlier this week, Trump said the U.S. would strike Iranian sites, including cultural ones, if the Islamic Republic retaliated. The Pentagon and other officials have since walked back those remarks.

Timeline: How The U.S. Came To Strike And Kill A Top Iranian General

In the days after the Soleimani strike, the Trump administration faced domestic political criticism over the lack of transparency following the operation. The administration maintained that the U.S. faced an imminent threat.

"If you're looking for imminence, you need look no further than the days that led up to the strike," U.S. Secretary of State Mike Pompeo said Tuesday, alluding to the violent protests outside the U.S. Embassy.

Members of Congress who were briefed Wednesday by Trump administration officials about the killing of Soleimani had mixed responses, largely reflecting partisan divisions.

Trump supporter Rep. Mark Meadows, R-N.C., said, "It leaves little doubt in my mind — and certainly should leave little doubt in any member's mind — that not only did the president make the right call, but that this was a clear and present danger for American interests and American individuals."

But another Republican, Sen. Mike Lee of Utah, called the briefing "insulting," and "probably the worst briefing at least on a military issue I've seen." Lee said he now intends to support a war powers resolution expected to come up for a vote in the Senate in the coming weeks.

Rep. Anthony Brown, D-Md., a veteran, said he did not hear "a single factual predicate that was offered in that briefing that supports the conclusion that the threat was imminent, nor did we get a real flavor and feel for the nature of the intelligence. So it was really disappointing. I mean everything I heard there you all have been reporting on for the last week or so."

And California Democratic Rep. Barbara Lee insisted that Congress should reassert "its role in exercising our constitutional responsibility."

"If in fact any president wants to use force or conduct military strikes, then they must, he or she must, come to Congress for that authorization," she said.

An earlier version of this story incorrectly said the nuclear agreement with Iran limited Iran's ability to pursue nuclear weapons in return for millions of dollars of Iranian assets that had been held by the United States. The amount was billions of dollars.