Accessibility links
Iran's Missile Strike Against The U.S. In Iraq: What We Know Satellite photos show the Iranian strike caused extensive damage — but apparently no loss of life — at the Ain al-Assad air base in Iraq. "We suffered no casualties," President Trump said Wednesday. 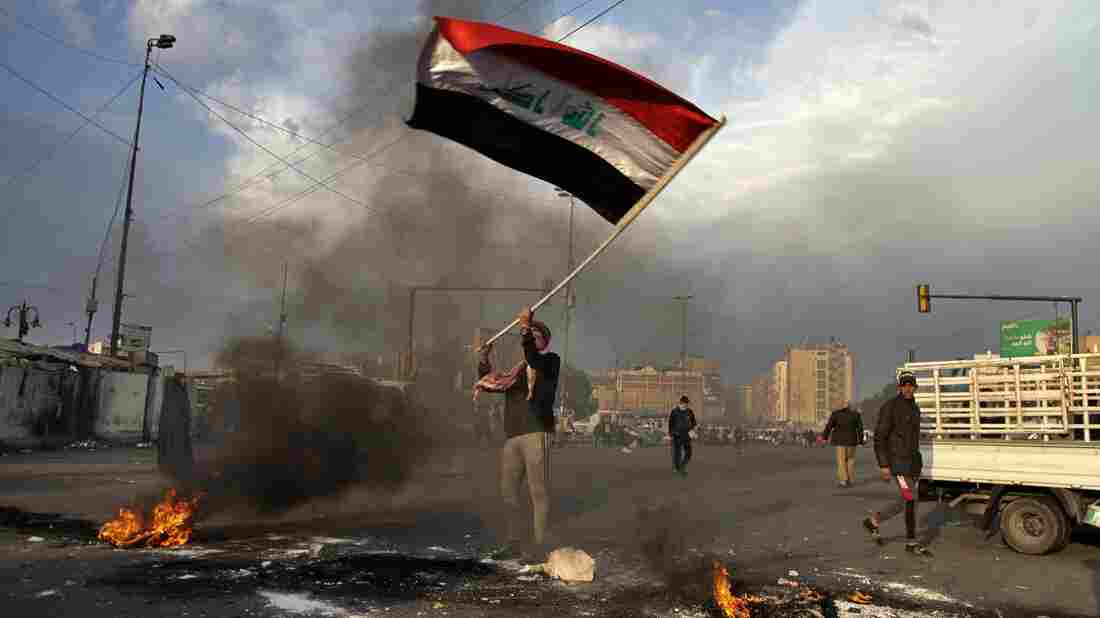 A protester waves the Iraqi flag in Baghdad on Wednesday. Both the U.S. and Iran have launched attacks in Iraq in the past week — including the Iranian missile strike on bases housing U.S. military personnel. Khalid Mohammed/AP hide caption 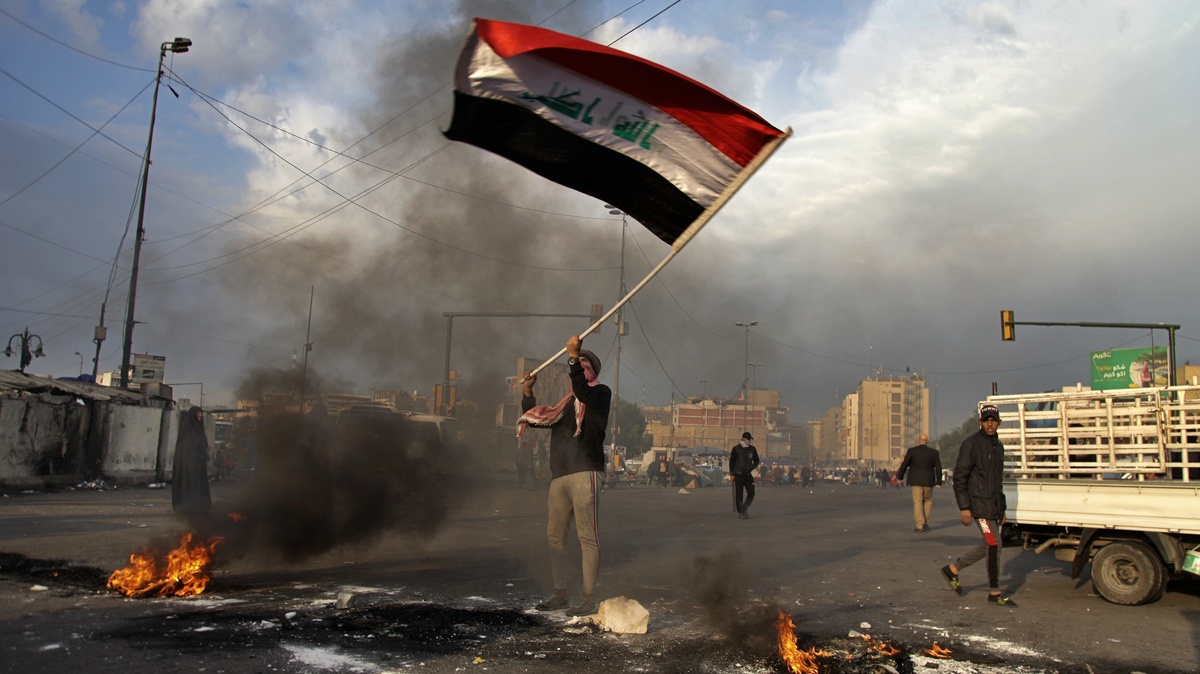 A protester waves the Iraqi flag in Baghdad on Wednesday. Both the U.S. and Iran have launched attacks in Iraq in the past week — including the Iranian missile strike on bases housing U.S. military personnel.

Details are still emerging about Iran's ballistic missile attack on Iraqi bases housing American military forces, which set off rampant speculation about a potential U.S. response. But President Trump suggested Wednesday that any U.S. action would be economic, not military.

Here's a recap of what we know about the strikes, reactions to the attack and what's next:

Where did the attacks hit, and were there any casualties?

The U.S. Department of Defense says Iran fired "more than a dozen ballistic missiles" at military bases in Ain al-Assad, northwest of Baghdad, and in Irbil, in the semiautonomous Kurdish region.

Satellite photos from Wednesday show that the Iranian strike caused extensive damage at the Ain al-Assad air base, as NPR's Geoff Brumfiel reports.

"Some of the locations struck look like the missiles hit dead center," says David Schmerler, an analyst with the Middlebury Institute of International Studies at Monterey.

No Iraqi, American or coalition casualties have been reported in the attacks. The large Ain al-Assad base has about 1,500 personnel, including some 300 Americans. NPR Pentagon reporter Tom Bowman says the Irbil base would likely have "hundreds of troops" present.

Both Finland, which has troops stationed at the Irbil base, and Lithuania, whose troops were stationed at Ain al-Assad, say their people were unharmed by the Iranian attack. The Associated Press reports that those two countries were warned of the strike and had time to move personnel to safety.

The Pentagon said in a statement that two bases were attacked, though Iran's Islamic Revolutionary Guard Corps specifically mentioned only the strike on Ain al-Assad.

What the U.S. says

"I'm pleased to inform you, the American people should be extremely grateful and happy. No Americans were harmed in last night's attack by the Iranian regime," Trump said Wednesday in a speech at the White House. "We suffered no casualties. All of our soldiers are safe, and only minimal damage was sustained at our military bases."

Shortly after the Iranian attack began, at about 5:30 p.m. ET on Tuesday, Trump tweeted:

"All is well! Missiles launched from Iran at two military bases located in Iraq. Assessment of casualties & damages taking place now. So far, so good! We have the most powerful and well equipped military anywhere in the world, by far!"

Earlier that same day, Trump said he had a "very good meeting" with a senior official from Iran's nemesis, Saudi Arabia. Trump said he and the Saudi vice minister of defense talked about oil prices, security and stability in the Middle East.

Trump had previously warned Iran against retaliating for the Soleimani killing, threatening to include cultural sites if the U.S. struck Iran directly. White House officials later appeared to walk back the possibility of targeting cultural sites.

As NPR has reported, the U.S. cannot legally target cultural sites. The Hague Convention — which the U.S. signed in 1954 — requires countries to refrain from any hostile actions against cultural property.

The military action by itself isn't enough to satisfy Iran, Khamenei said, adding, "What is important is that the corruptive presence of the U.S. in this region must end."

Suggesting that the missile strike might be the crux of its retaliation for Soleimani's killing, Iranian Foreign Minister Mohammad Javad Zarif said via Twitter, "Iran took & concluded proportionate measures in self-defense under Article 51 of UN Charter." He added that the strike targeted the Iraqi base from which the U.S. drone strike was launched.

"We do not seek escalation or war, but will defend ourselves against any aggression."

Iranian President Hassan Rouhani described Soleimani as a hero who fought against ISIS and other terrorist groups. "If it weren't for his war on terror, European capitals would be in great danger now," Rouhani said on Twitter. "Our final answer to his assassination will be to kick all US forces out of the region."

Iraq's military has confirmed that Iran sent a warning shortly after midnight local time that the missile attack was starting or would soon begin, according to the Iraqi News Agency. The warning stated that while the missiles would hit targets on Iraqi soil, they would be aimed only at U.S. military assets.

Iraqi Prime Minister Adil Abdul-Mahdi's office said that at the same time the Iranian warning came in, Iraq also received an alert from the U.S., saying that at least two bases were being attacked.

Abdul-Mahdi also reiterated that his government rejects any violations of its sovereignty. The prime minister, who attended Soleimani's funeral over the weekend, has previously called the U.S. attack on the Iranian in Baghdad an "act of aggression against Iraq" that could "light the fuse of war."

In response to the Iranian attack, Trump said Wednesday that he will levy "punishing economic sanctions" against Tehran. The president also called on NATO to become "much more involved in the Middle East process."

The sanctions come after speculation that the U.S. might avoid escalating the crisis with more violence if no lives were lost in Iran's retaliation.

As NPR's Bowman says, "The president has said there are 52 targets in Iran that they could strike — but frankly, they may just decide if there are no casualties, maybe they won't strike back."

And what about Iranian-backed militias operating in Iraq?

The Iraqi Shiite militia Asaib Ahl al-Haq — which the U.S. last week designated as a terrorist organization — has issued a statement calling Iran's strike a preliminary response and warning that it will carry out its own retaliation.

"That response will be no less than the size of the Iranian response. That is a promise," militia leader Qais al-Khazali said, according to Arab News.

"We, of course, condemn the attack on Iraqi military bases hosting coalition forces," U.K. Prime Minister Boris Johnson told Parliament on Wednesday. "Iran should not repeat these reckless and dangerous attacks, but must instead pursue urgent de-escalation."

Opposition leader Jeremy Corbyn questioned the legality of the U.S. strike, calling it an assassination carried out on foreign soil.

Johnson said the United States has a right to protect its equipment and personnel, and he accused Soleimani of having "had the blood of British troops on his hands" by supplying improvised explosive devices to militants.

NPR's Frank Langfitt reports from London that "Johnson is trying to walk a fine line, supporting a U.S. president from whom he needs a post-Brexit trade deal — while not seeming to be doing the bidding of Britain's longtime ally, the United States."

Meanwhile, the United Nations mission in Iraq is calling for restraint, saying, "Senseless violence has predictable effects" and adding that Iraq will be left to pay the price for "external rivalries."

In Australia — which has troops in Iraq as part of the U.S.-led coalition — Prime Minister Scott Morrison said his government is moving to protect its military and diplomatic personnel in Iraq as it closely monitors the situation there. Morrison will lead a meeting of his national security committee on Thursday.

French Foreign Minister Jean-Yves Le Drian also condemned Iran's missile attack. And he emphasized that the U.S. and other coalition members must continue to fight against ISIS while also respecting Iraq's sovereignty.