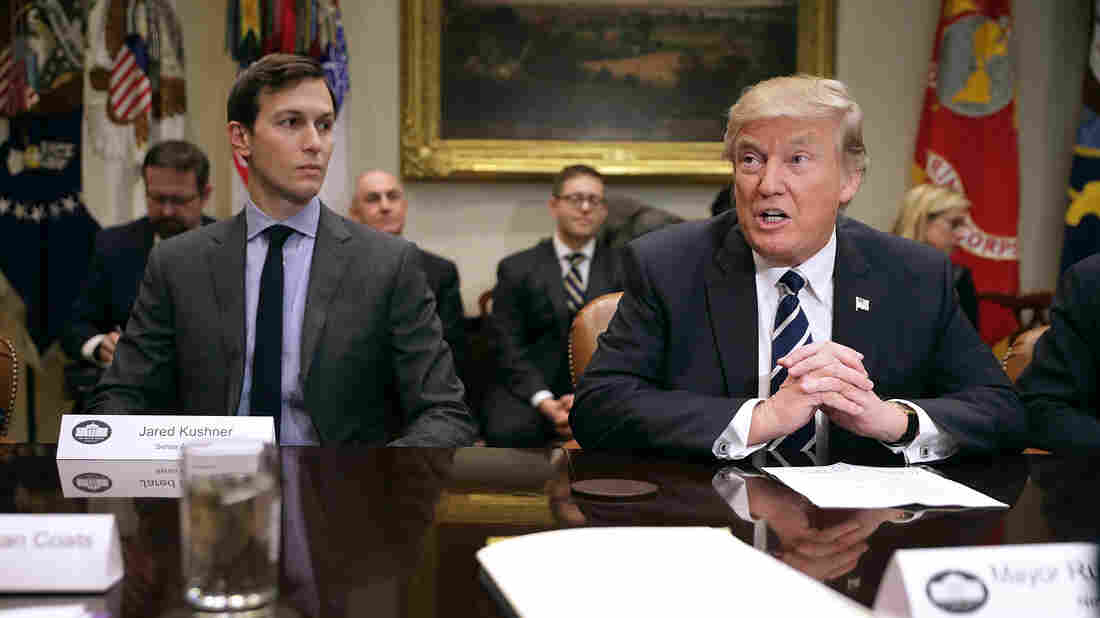 President Trump delivers remarks at the beginning of a 2017 meeting with his son-in-law and senior adviser, Jared Kushner. Andrea Bernstein's new book, American Oligarchs, argues that both the Trump and Kushner families have benefited from the intersection of money and politics. Chip Somodevilla/Getty Images hide caption 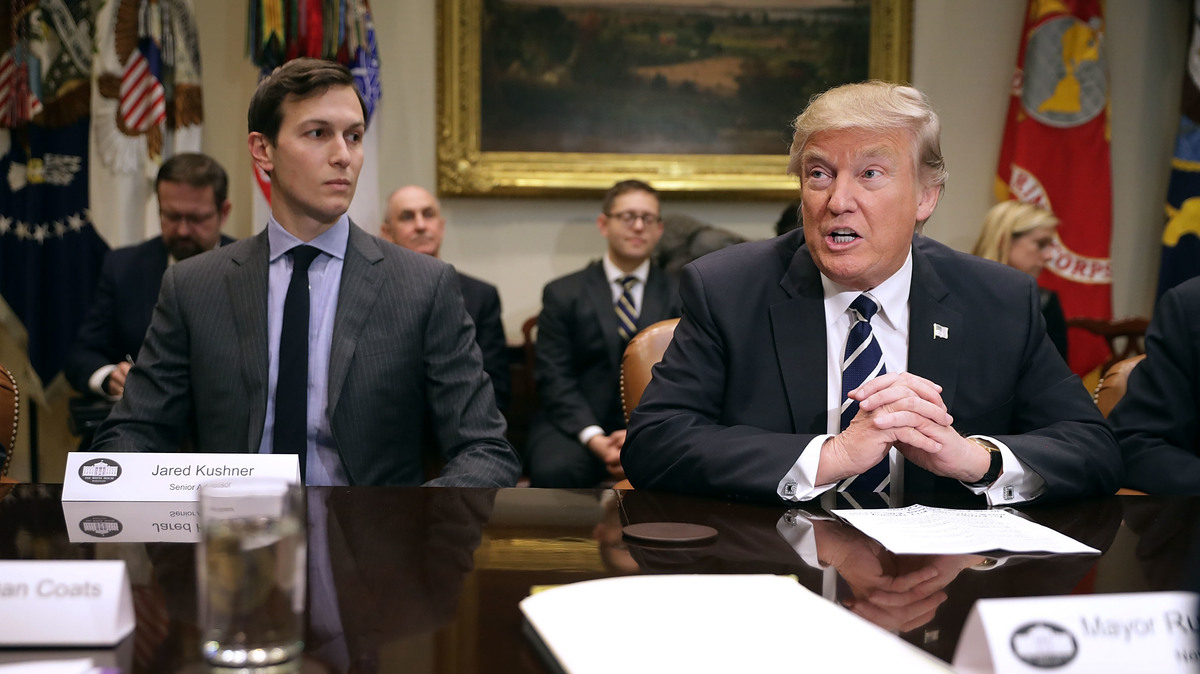 President Trump delivers remarks at the beginning of a 2017 meeting with his son-in-law and senior adviser, Jared Kushner. Andrea Bernstein's new book, American Oligarchs, argues that both the Trump and Kushner families have benefited from the intersection of money and politics.

Today President Trump is the face of the Republican Party, but as recently as 2011, Trump donated $5,000 to Democrat Kamala Harris' campaign to become California's attorney general. American Oligarchs author Andrea Bernstein says Trump's donation history is indicative of a practice he learned from his father, Fred Trump.

Fred Trump amassed his real estate fortune in part, Bernstein says, by donating to politicians who would bend rules to his favor — and his son followed suit: "It is a lifelong practice for Fred Trump — and then later for Donald Trump — that they cultivate[d] their connections with the Brooklyn political machine, which at that time was almost exclusively controlled by the Democratic Party."

"You would see [Donald Trump] continuing the practices that he learned from his father: making enormous political donations, hiring the lawyers and the insurance brokers and other people connected to the political machines, learning how to manipulate law enforcement," she says.

Bernstein co-hosts the podcast Trump, Inc., which investigates who profits from the Trump administration. Her new book, American Oligarchs, examines how Trump and his son-in-law, Jared Kushner, have benefited from family connections and the influence of money in politics.

On Donald Trump's grandfather, Friedrich Trump, who emigrated from Germany in 1885 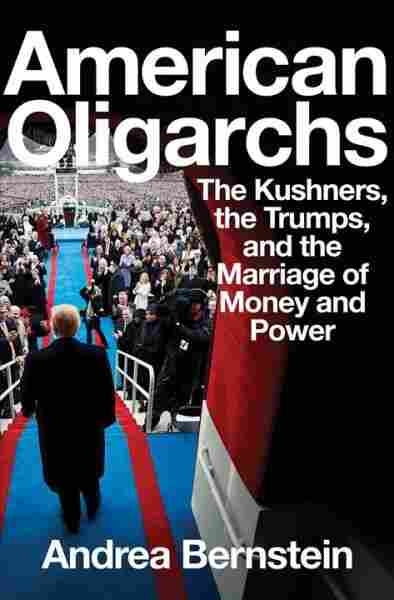 The Kushners, the Trumps, and the Marriage of Money and Power

Title
American Oligarchs
Subtitle
The Kushners, the Trumps, and the Marriage of Money and Power
Author
Andrea Bernstein

He left Germany because of inheritance laws. He was not the oldest son, and he was only going to be able to inherit a small plot of land. Also, Germany was at war, and he didn't want to enter the army. So he came to America and got work immediately as a barber. He lived in New York City and decided he wanted to make more money. So he went west. ...

It was ... the end of the gold rush era. And so people streamed northward. And it was an incredibly arduous passage to this territory in [what was] really Alaska then, or, I guess, northwest Canada. There was this dream of people going there. They had to carry 1,000 pounds of goods with them to make sure that they would make the trip. So it was a really hard trip, and they had to eat horse meat along the way, and there were driving mosquitoes. But when they got there, they were looking for gold.

Now, Friedrich Trump was not doing that. He was in the hospitality business. He ran a series of restaurants known as the Arctic Restaurant. And they sold all kinds of food and liquor. The evidence suggests sex — that they were actually places where the men doing the mining could find female company. ...

Not very many people made money from the gold rush, but Friedrich Trump managed to escape the gold rush with a lot of money and bring it back east, which is how they started the Trump family real estate business.

On the involvement of Donald Trump's father, Fred Trump, in the New York political machine

In the mid-1930s, [Fred Trump] goes into a Brooklyn courtroom with very little real estate experience ... buying, building houses and selling them one by one until he actually got out of the business because of the Depression. And he goes and he ... makes an argument for why he should get an assignment from a judge to take over a piece of a bankrupt company. But he realizes along the way that ... the judges are controlled by the Brooklyn political machine. And to get the judge's attention, he needs to become close to the Brooklyn political machine. ...

So Fred Trump becomes one of the largest donors to the Democratic Party. He becomes very, very close to a Democratic political club called the Madison Club. And the way these clubs worked at the time was that they would get people out to the polls and they would sort of offer jobs to the people that were loyal. And they control everything.

On the Trump family's business dependence on government help

They could not have been what they are without the help of the taxpayers in a whole variety of ways through infrastructure programs, through tax abatement programs, which allowed them to avoid paying taxes in certain instances. And they also benefited by what The New York Times called "outright fraud." They just simply didn't pay the taxes they were supposed to. So they were in this position of getting help from the government and getting help from government programs, at the same time actively trying not to pay money back to the taxpayers.

On why the Trumps spread the myth that they're Swedish

There are a lot of outright falsehoods in the Trump family biography, and in what Trump says about himself, and in what his father said about himself. Fred Trump's father came from Germany and his mother came from Germany and they actually spoke German at home. And he, during the war, was building — in Virginia — federally subsidized housing. And he didn't want people to know of his German roots, so he said he was Swedish.

And this became a theme constantly that Fred Trump — and then later, Donald Trump — said their roots were Swedish. And they said it constantly. The most interesting time they said it was at Fred Trump's funeral. The New York Post reported Fred Trump was from Sweden. That lie traveled with him until the end of his life. And in many of the early profiles of Donald Trump, for example, in The New York Times, they kept saying his ancestors are Swedish. And it was repeated over and over again. But Donald Trump's grandfather and grandmother were definitely from Germany.

It was clear where his grandparents were from. But it became a family myth, because it was better business to be Swedish than it was to be German during the war. And Donald Trump seems to have attached to the glamour of Swedish [people]. He refers in his own book on several occasions to Swedish models. So it's something that he seems to view as aspirational, as a good place to be from. You might remember when he made his comments about countries giving us immigrants, he said, why can't we get people from Norway? So he seems to have a fixation on Scandinavia as being a desirable place to be from.

The Kushner family was sent to die, to board trucks bound for mass graves. But then, before they could board the trucks, they were asked, "Is anybody here a furrier?" And the Kushners said they were, and the Germans pulled them out of the line because they wanted them to make hats and coats for the German army. And this is what they did. They basically lived inside a ghetto, had very little to eat and had to work as enslaved people for the Nazis, and the Nazis kept killing more and more people as they decided they were superfluous. There were a few hundred survivors in the summer of 1943, and they realized they had to escape. They knew that there was a band of partisan Jews in the forest. And if they could get out there, they had a chance of living. So they began to dig a tunnel, and they had to hide the bags of dirt that they were excavating underneath beds and inside walls so the Nazis wouldn't find them. But they did build this tunnel and crawled out of it. It was 2 feet across. [Jared's grandmother] Rae Kushner and her father, Naum Kushner, and her sister, Lisa, made it out of the tunnel alive and into the forest. Their brother Chanon, when he got out of the tunnel, became disoriented, ran in the wrong direction and was ultimately shot by the Nazis.

One of the things that the Trump family has always understood is that part of their business success needs to be making sure that no law enforcement agent or district attorney or prosecutor is going to blow the whistle. ... He has managed through money and charm to keep law enforcement at bay, and he has never been called to account. And what we find is that each time he is not called to account, he feels more powerful to go even further the next time. We see this exact pattern with Ukraine. [The] Mueller report does not lead to an impeachment. The day after Mueller testifies, [Trump] calls the president of Ukraine and asks him to interfere in the 2020 election. So what is at balance in this upcoming impeachment trial? This is the final way to call Donald Trump to account. If he is not called to account, I think we can only expect what we've seen in the past, which is that he feels even more empowered to break rules, break norms in the way he's been doing.