Accessibility links
More Than 60 Canadians Among Those Killed In Jet Crash In Iran Prime Minister Justin Trudeau called the plane crash in Tehran that killed 176 people "heartbreaking." One newspaper reported that nearly half of the Canadians who died are from the Edmonton area. 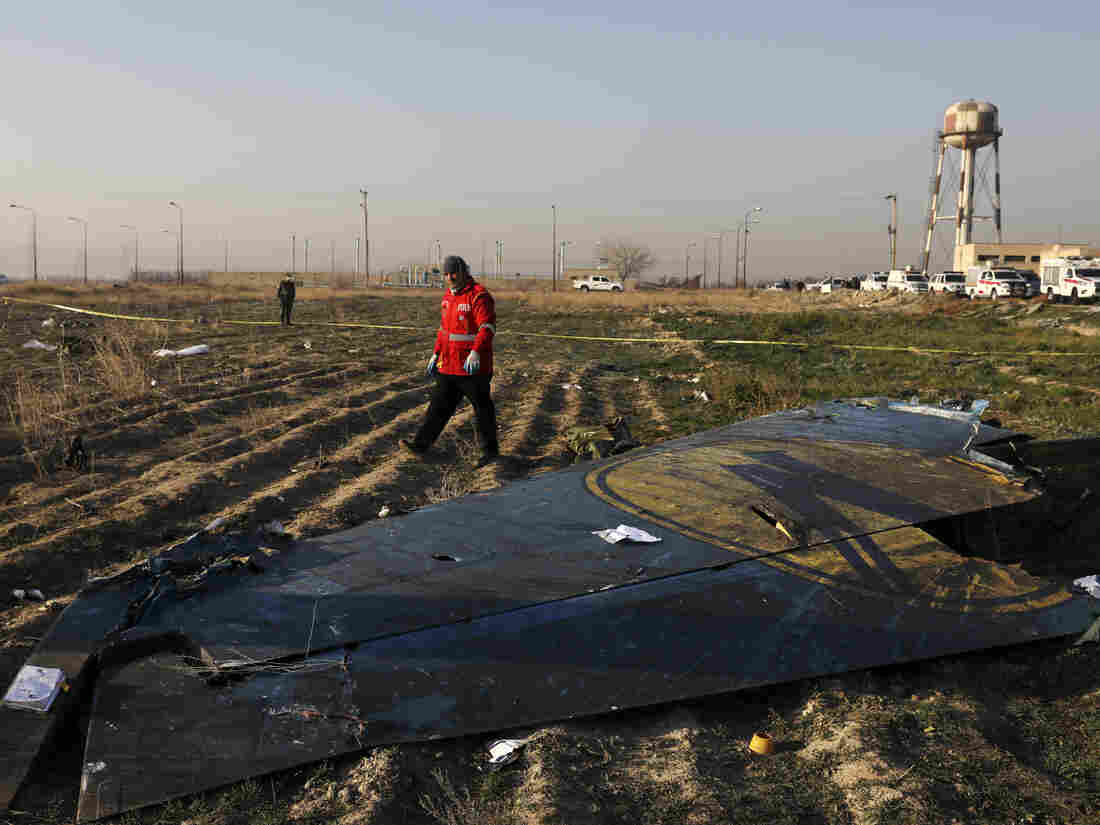 A rescue worker searches the scene where a Ukraine International Airlines plane crashed near Tehran's Imam Khomeini International Airport on Wednesday. All 176 people onboard the Boeing 737-800 were killed. Ebrahim Noroozi/AP hide caption 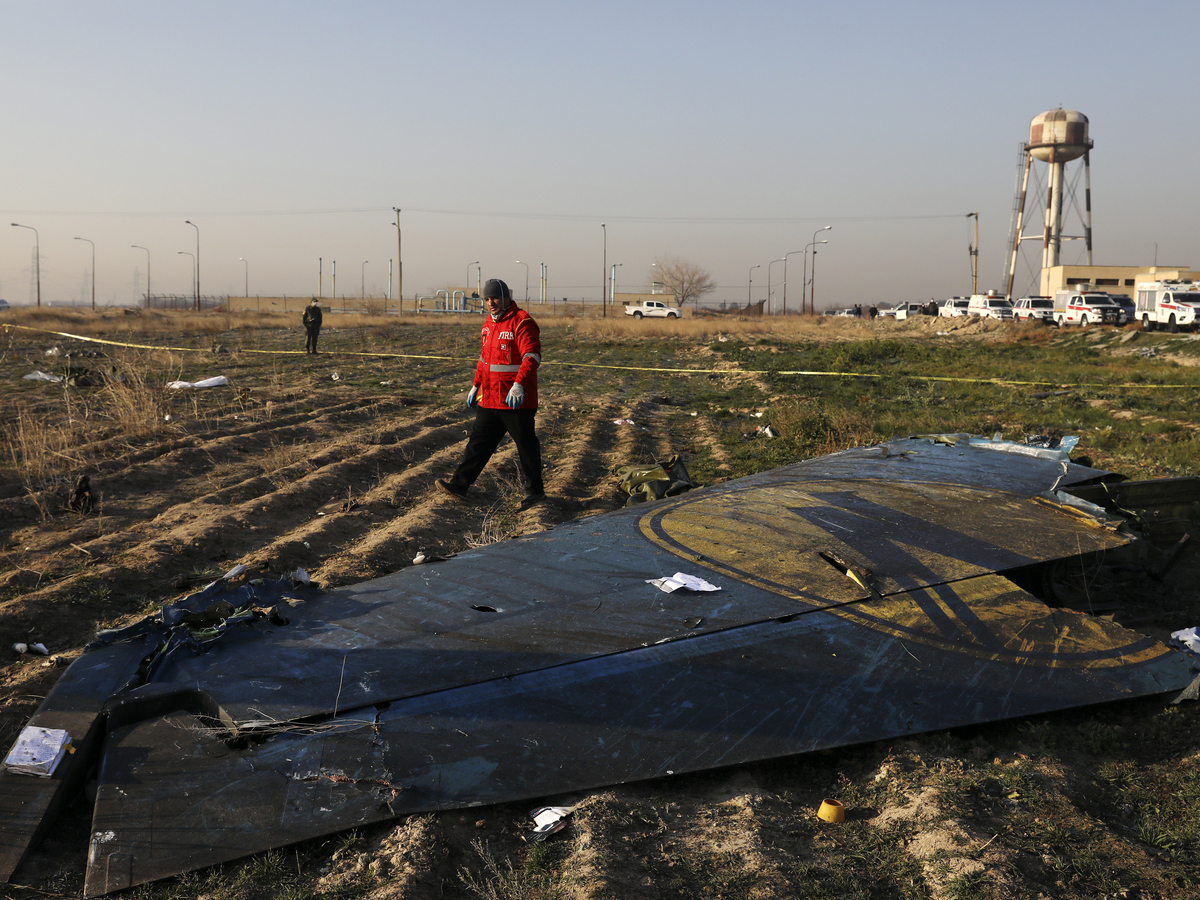 A rescue worker searches the scene where a Ukraine International Airlines plane crashed near Tehran's Imam Khomeini International Airport on Wednesday. All 176 people onboard the Boeing 737-800 were killed.

Canadian Prime Minister Justin Trudeau offered his "deepest condolences" to those mourning the 176 people — including 63 Canadians — who died in a plane crash Wednesday morning in Iran.

The jetliner, operated by Ukraine International Airlines, plummeted shortly after taking off from Tehran's Imam Khomeini International Airport. Everyone on board was killed. The crash was one of the worst aviation disasters involving Canadian loss of life in the nation's history.

"I was deeply shocked and saddened," Trudeau said in a statement Wednesday. "On behalf of the Government of Canada, Sophie and I offer our deepest condolences to those who have lost family, friends, and loved ones in this tragedy," Trudeau said on behalf of himself and his wife.

"I assure all Canadians that their safety and security is our top priority. We also join with the other countries who are mourning the loss of citizens."

Heartbreaking news from Tehran this morning: 176 people, including 63 Canadians, have lost their lives in a tragic plane crash. My thoughts are with all those who are mourning the loss of family members, friends, and loved ones. https://t.co/rSTTbGj0oG

The cause of the crash is still unknown, but it appears that one of the plane's engines caught on fire, an eyewitness told The Associated Press.

The Boeing 737-800 departed from Tehran a little after 6 a.m. local time, according to the commercial aviation tracking website Flightradar24. It was bound for Ukraine's capital, Kyiv.

Ukrainian Jetliner Crashes Near Tehran Airport, Killing All 176 Aboard

According to a tweet from Ukrainian Foreign Minister Vadym Prystaiko, the victims were 82 Iranians, 63 Canadians, 11 Ukrainians (including the nine crew members), 10 passengers from Sweden, four Afghans, and three each from Germany and the United Kingdom.

Francois-Philippe Champagne, Canada's minister of foreign affairs, tweeted Wednesday morning that he had been in contact with the government of Ukraine.

"Tragic news regarding Ukraine International Airlines Flight 752. Our hearts are with the loved ones of the victims, including many Canadians," Champagne said. "I have been in touch with the government of Ukraine. We will continue to keep Canadians informed as the situation evolves."

Tragic news regarding Ukraine International Airlines Flight 752. Our hearts are with the loved ones of the victims, including many Canadians. I have been in touch with the government of Ukraine. We will continue to keep Canadians informed as the situation evolves. #PS752

Canada's CBC reports that several of the Canadians killed are thought to be from Alberta's capital city, Edmonton, including two faculty members at the University of Alberta.

Canadian authorities have not released the names of the dead to the public. An NPR request for comment to University of Alberta was not immediately returned, but the university did post a pair of tweets asking for patience and respect.

"The University of Alberta extends our deepest condolences to all those affected by last night's tragic events in Iran. Thank you for your patience as we work to confirm the impact on our community."

1/The University of Alberta extends our deepest condolences to all those affected by last night’s tragic events in Iran. Thank you for your patience as we work to confirm the impact on our community. #UAlberta

2/ We encourage you to reach out to the supports that you need during this time and be mindful of discussing this situation on social media out of respect for those involved. https://t.co/G2FqHXygE8 #UAlberta

Payman Parsayan, an Iranian-Canadian living in Edmonton, says he knew several people on the doomed jetliner. He told reporter David McGuffin that a friend and the friend's family were among the dead.

"One of my friends, him, his wife, and two young girls were killed," Payman Parsayan told McGuffin, a freelance reporter working for NPR in Ottawa.

"His girls were 9 and 14. How can someone put words to that? I can't imagine what their families are going through."

As McGuffin reports, "Canada's ability to handle the aftermath of this crash is complicated. It does not have an embassy or diplomats in Iran. It severed ties with Tehran in 2012 over Iran's human rights record and its support of international terrorism. Italy handles consular issues in Iran for Canadians."

On Wednesday, Canada issued new alerts to its citizens, warning travelers to "avoid non-essential to Iran" because of an unstable security situation and threat of terrorism.

The Edmonton Journal reports that at least 30 Edmontonians are among the dead. Reza Akbari, president of Iranian Heritage Society of Edmonton, told the newspaper that members of the Edmonton Iranian community have been communicating via a mobile app to try to confirm victims in the crash.

"It's been a shock. I know some of these people in person," Akbari told the Journal.

He adds, "I had a chance to see them at different parties, gatherings, I'm in shock. I can tell you pretty much every Iranian in Edmonton knew some of them. So it's very devastating."

Heartbroken to hear the news of the fatal plane crash. On behalf of Edmontonians & your #yegcc, I would like to offer the families & friends who have lost a loved one in this tragedy our deepest condolences. We are in mourning today — our community has suffered a terrible loss. pic.twitter.com/iRIfXTTdSU

"While no words can erase the pain this crash has caused, I, on behalf of Edmontonians and your City Council, would like to offer the families and friends who have lost a loved one in this tragedy our deepest condolences. Edmonton is mourning today – our community has suffered a terrible loss," Iveson said.

The Boeing aircraft that crashed in Tehran is a different model from the aerospace giant's troubled 737 MAX series, which has been grounded for nearly a year after deadly crashes in 2018 and 2019.

In a tweet Wednesday, Boeing said that it was in touch with Ukraine International Airlines and that it vowed to "stand by them in this difficult time. We are ready to assist in any way needed."