'The Gimmicks' Has Heart, But A Few Too Many Gimmicks

'The Gimmicks' Has Heart, But A Few Too Many Gimmicks 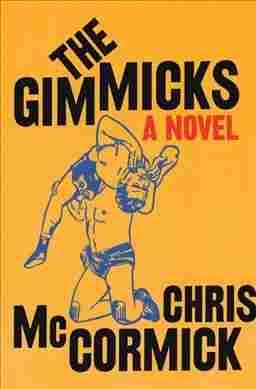 Calling a novel The Gimmicks is a big risk. The title promises charm and entertaining contrivance, perhaps a certain fun boardwalk-prize tackiness. But too much charm becomes phony, and a too-contrived plotline wrecks a reader's suspension of disbelief. As for tackiness — that depends on the novel itself.

In Chris McCormick's The Gimmicks, his follow-up to the acclaimed 2017 linked-story collection Desert Boys, the glitz of pro wrestling proves a welcome counterbalance to the otherwise somber story of Avo and Ruben, two Armenian cousins whose involvement with a militant Armenian liberation organization has unsurprisingly tragic results (McCormick is of Armenian descent on his mother's side). Sweet, gigantic Avo provides much of the book's charm, while his conniving cousin keeps the plot moving. The result is engrossing, but McCormick doesn't quite get the ratio right. Fewer gimmicks, ultimately, would have served The Gimmicks well.

It may be telling that McCormick is at his best when writing in a mode of total sincerity. He does this mainly while his loosely omniscient narrator is trailing Avo, the most endearing of the book's characters by far. Avo is a gentle giant in the mold of Schwartz from Chad Harbach's The Art of Fielding: a huge, gruff athlete with a kind spirit and poetic inclinations. In adolescence, he uses his size to defend his backgammon-champion cousin Ruben, who seems, frankly, insufferable. He's humorless and sour, obsessed with the memory of the Armenian genocide — The Gimmicks opens some 60 years after the genocide's end, during Armenia's time in the Soviet Union — but without empathy for Avo, their mutual friend and love interest Mina, or much of anyone else. It comes as little surprise when he sneaks off to join the Armenian Secret Army for the Liberation of Armenia (ASALA), a real-life guerrilla group responsible for three major terrorist attacks between 1975 and 1983. The bigger surprise is that he recruits Avo to join.

This is when the gimmicks begin. McCormick jumps around in space and time, cutting between four characters: Avo, Ruben, Mina, and an aging American wrestling manager named Terry who, it turns out, shepherded Avo through a two-year fighting career under the name The Brow Beater. Terry is useful as the book's outsider and reigning expert on gimmicks. In one memorable scene, he announces to Avo, newly arrived in the United States, that the American Dream is simply "the ability to trade gimmick after gimmick until you [get] one over" — a definition that, despite its pessimism and absurdity, rings somewhat true. Terry's cockeyed wisdom lends a necessary sheen of weirdness to The Gimmicks, saving it from Ruben's dour spirit. The love triangle between the cousins and Mina, in contrast, is only loosely developed, a plot engine for a novel that doesn't need one. (Or, worse, an artificial way to squeeze a female perspective into a novel that's otherwise, like pro wrestling in the early '80s, intensely male.) The question of how Avo got from ASALA to Terry's passenger seat would be gimmick enough.

In 'Doxology,' The Comedy Is Never Quite In Tune

But McCormick is a more-is-more writer, in style as well as in plot. He loves figurative language — writing, for instance, that "on the road, [memory] holds its shape like smoke in the cold" — and minor characters. The Gimmicks is a populous book, and a winding one. Strangely, though, it often winds away from memory, even though Ruben and Terry agree that not remembering is the "greatest shame" on Earth. For a novel concerned with the right way to commemorate the Armenian genocide — by any means necessary, as Ruben believes? Or by rejecting both denial and violence, as Avo eventually decides is right? The Gimmicks is not especially oriented toward the past. It hops around in time, but fundamentally, the book seems to side with Mina, who "could never fully understand [other Armenians'] absorption with the past. She never said it, for fear of causing further pain, but she wanted — very badly wanted — to move forward already."

The Gimmicks certainly moves forward. In its third act, it rockets along, safely wrapping up each character's literary and moral trajectory. There are bombings and murders, but mostly offstage — like Mina, McCormick seems not to want to cause pain. This instinct is a disservice to Ruben, who performs plenty of violence in ASALA's name. Because McCormick shies away from the details of these acts, Ruben remains shadowy throughout. Though he and Avo are theoretically the novel's co-stars, both structure and storytelling make Avo into its lone hero. His arc is truly affecting, and thought-provoking in a way his militant cousin's should be, too. But The Gimmicks, in the end, is more about wrestling than guerrilla warfare; more about scripted brutality than the real thing. Terry, with his nostalgia for gimmicks, would appreciate that. I, for one, wanted more.