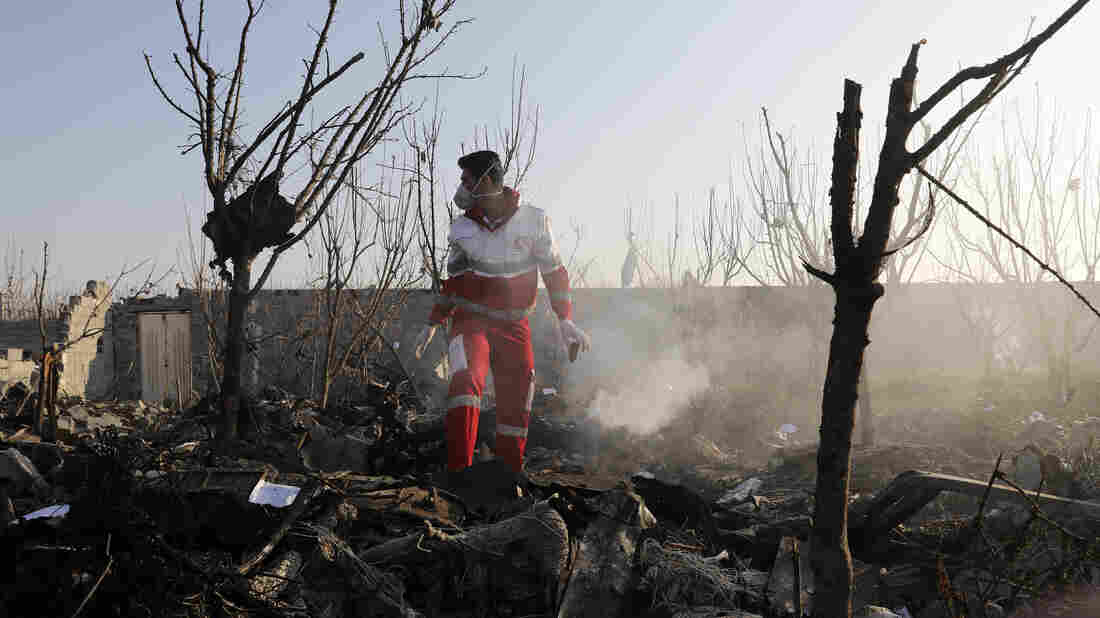 A rescue worker combs the wreckage of a Ukraine International Airlines plane near Iran's Imam Khomeini International Airport on Wednesday. All 176 people on board died in the crash, which Ukraine is now investigating. Ebrahim Noroozi/AP hide caption 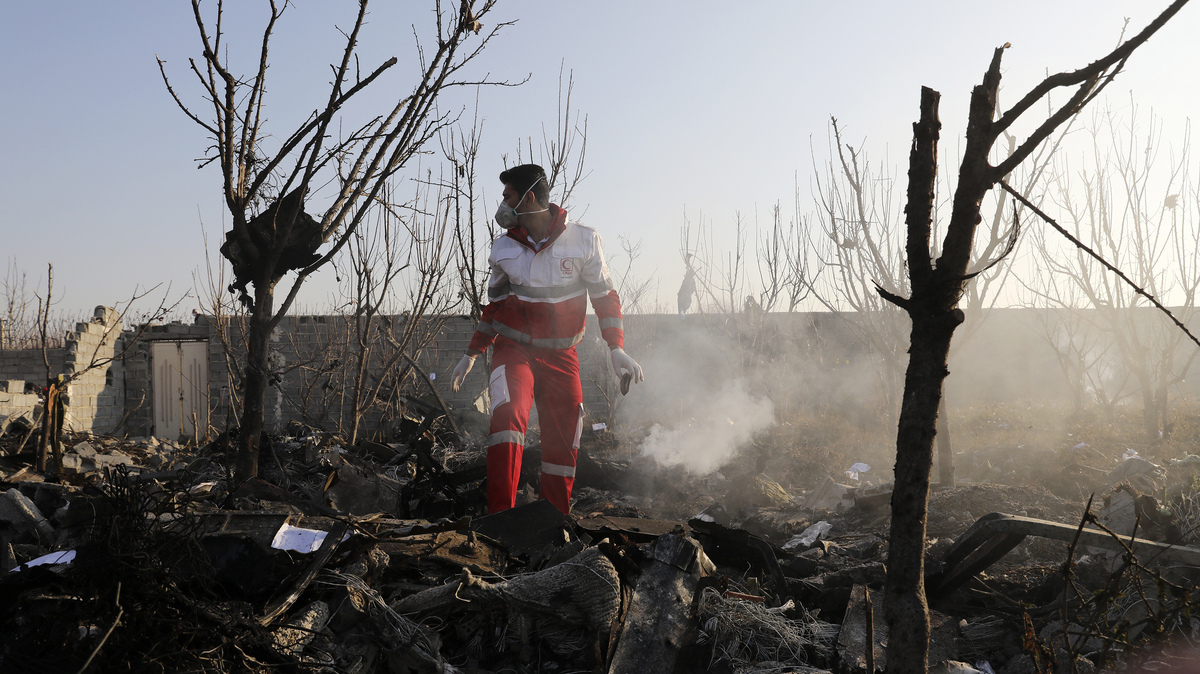 A rescue worker combs the wreckage of a Ukraine International Airlines plane near Iran's Imam Khomeini International Airport on Wednesday. All 176 people on board died in the crash, which Ukraine is now investigating.

"We have intelligence from multiple sources, including our allies and our own intelligence. The evidence indicates the plane was shot down by an Iranian surface-to-air missile," Trudeau said during a news conference in Ottawa, one day after all 176 people aboard — including dozens of Canadian passengers — died in the crash.

"This may well have been unintentional," he added.

Trudeau cautioned that the findings remained preliminary and declined to elaborate on the nature of the evidence Canada and its allies have obtained.

He noted that Canadian Foreign Minister François-Philippe Champagne spoke Wednesday night with his Iranian counterpart, Mohammad Javad Zarif, during which Champagne stressed the need for Canada to be granted speedy access to Iran to facilitate the investigation.

The situation demands a full probe in partnership with Iran, he added, in order to determine whether the missile strike was intentional.

"At least 63 Canadians were on board, and a total of 138 passengers on that flight were connecting to Canada — all people who won't be coming home to their parents, their friends, their colleagues or their family," Trudeau said.

Iranian authorities have denied suggestions that their own missile system accidentally brought down the plane.

Prior to Trudeau's address, a spokesperson for Iranian President Hassan Rouhani said the idea that such a mistake could have happened — suggested by President Trump during a news conference Thursday and reported by multiple U.S. media outlets at that point — is simply "impossible."

"We are at a point that satellite images can read our [license] plate numbers, so if there was a missile hitting a plane, then ... the satellite footage would have been available," Iranian presidential spokesman Ali Rabie told NPR's Mary Louise Kelly on Thursday.

"Apart from that, we have the 'black box' [flight data recordings]. We have asked the government of Ukraine to come, and we can give them the black box and analyze it together. Everything will become clear that it was just an accident."

Rabie's comments came just hours after Trump voiced his suspicions about the crash, saying without providing evidence that "somebody could have made a mistake."

Rabie rebutted this assertion, noting that "Ukraine and any other country can come and they can open" the black box flight data and cockpit recordings — though he added that they did not give them to U.S. officials because "we don't trust them and how they might read the information there."

"There is no issues regarding this that we are trying to hide," he said.

In a preliminary report issued earlier, Iran's Civil Aviation Organization noted that the flight recorders had been damaged in the crash but nevertheless were recovered and now are under review.

The National Transportation Safety Board said Thursday that Iran has given permission for it to help determine what caused the crash. Under international aviation protocols, the NTSB is supposed to take part in investigations of crashes of planes that were designed and manufactured in the U.S. But amid tensions between the two countries, Iranian authorities initially refused to give permission.

The organization found that Flight 752, a Boeing 737-800, was already on fire before the craft hit the ground, though "no radio messages were received by the pilot regarding unusual circumstances." The report also found that the plane had changed direction midflight, suggesting that it "was on its way back to the airport at the time of the crash."

The group offered no final conclusions on the cause of the crash.

Ukrainian President Volodymyr Zelenskiy vowed to get to the bottom of what happened.

"Undoubtedly, the priority for Ukraine is to identify the causes of the plane crash. We will surely find out the truth," he said in a recorded statement Thursday. "For this purpose, a thorough and independent investigation will be conducted in accordance with international law."

Oleksiy Danilov, secretary of Ukraine's National Security and Defense Council, is helping lead a joint commission in Tehran. According to a Facebook post by Danilov, the commission made up of international specialists is considering a wide range of theories at the moment — including a technical problem with the engine, a collision with another flying object, a terrorist act or a missile strike.

The Ukrainian official said the commission includes experts who investigated the 2014 attack on Malaysia Airlines Flight 17, which international investigators say was launched from rebel-held territory in eastern Ukraine using a Russian missile. 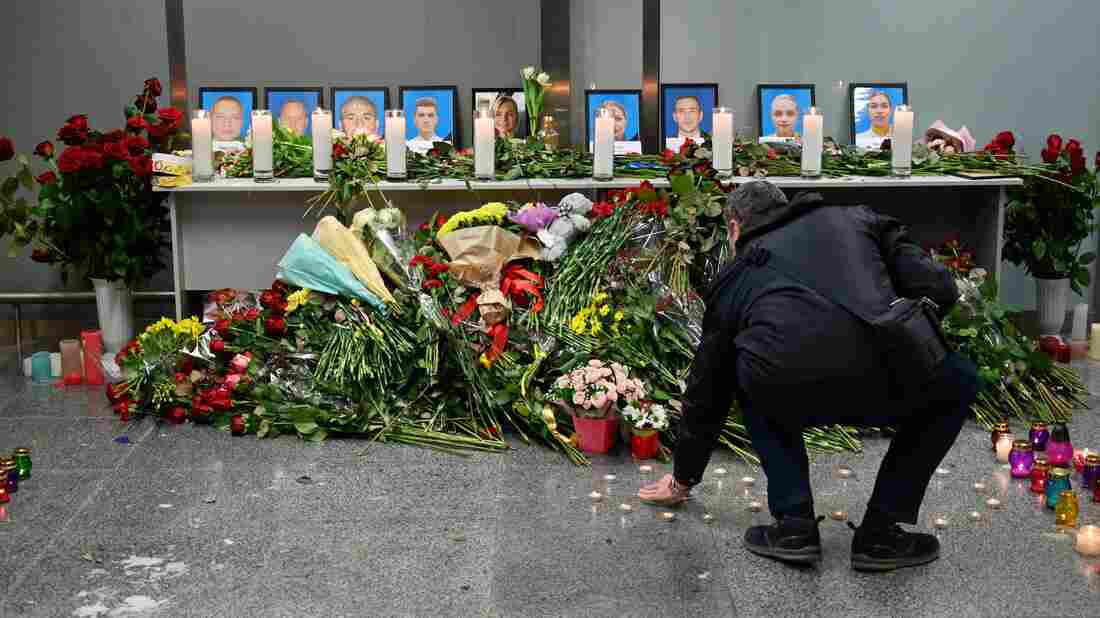 A man contributes to a memorial for the crash victims set up Wednesday at the airport outside Ukraine's capital, Kyiv. Among the 176 victims aboard the plane were 82 Iranians, 63 Canadians and 11 Ukrainians. Sergei Supinsky/AFP via Getty Images hide caption 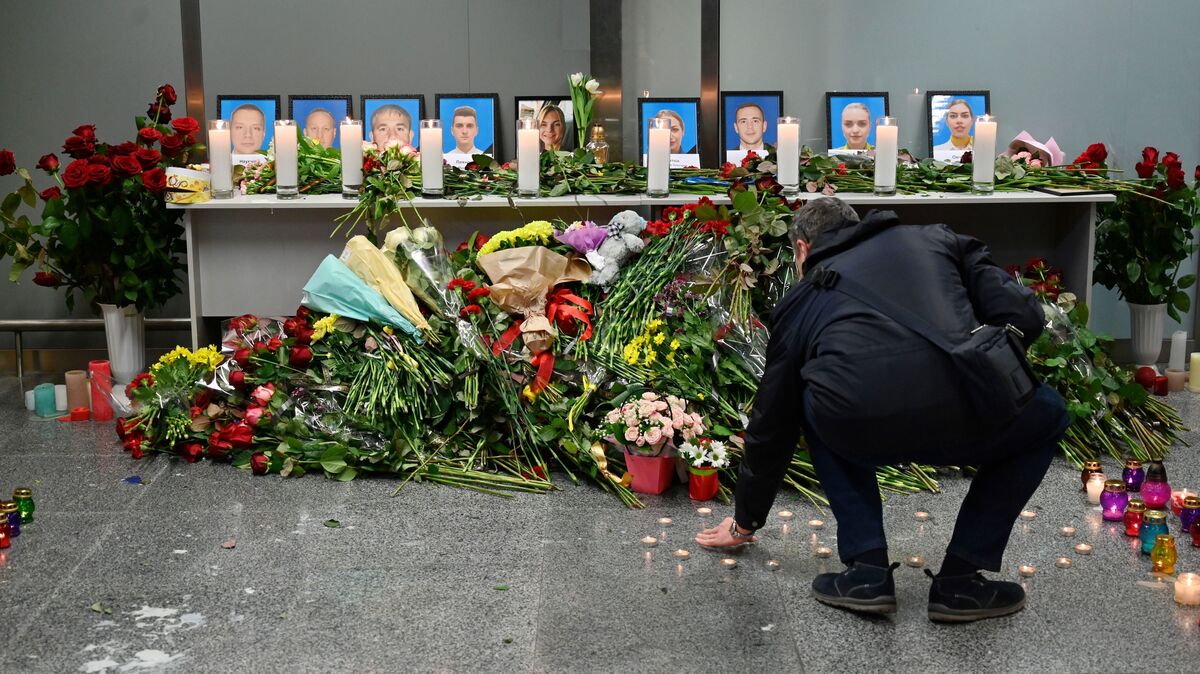 A man contributes to a memorial for the crash victims set up Wednesday at the airport outside Ukraine's capital, Kyiv. Among the 176 victims aboard the plane were 82 Iranians, 63 Canadians and 11 Ukrainians.

In addition to the 63 Canadians on Flight 752, 82 Iranians and 11 Ukrainians were aboard. Passengers from Sweden, Afghanistan, Germany and the U.K. were killed in the crash, as well.

Zelenskiy declared Thursday a national day of mourning for Ukraine and ordered that flags across the country be flown at half-staff. He also spoke with leaders in Sweden, Afghanistan and the U.K. to offer his condolences for their countries' losses.

"Yesterday was without exaggeration a tragic day in the history of our countries," he told British Prime Minister Boris Johnson, asking the U.K. to join its investigation into the incident, according to a summary of the call.

The plane crash came amid a period of heightened tensions between Iran and the U.S., sparked last week by the U.S. airstrike that killed prominent Iranian military commander Qassem Soleimani in Iraq. U.S. authorities say they carried out the drone strike — which also killed a major Iraqi militia leader — to prevent planned violence against American diplomats, not long after a crowd tried to storm the U.S. Embassy in Baghdad.

This week, Iran retaliated for that killing with ballistic missile strikes on Iraqi bases hosting U.S. military forces, in an operation that came within hours of the plane crash outside Tehran.

As for the investigation into the jetliner crash, Canada's prime minister vowed to get to the bottom of what happened.

"In the coming days and weeks, our government will continue to work closely with its partners to ensure that this crash is thoroughly investigated," Trudeau said. "Canadians have questions, and they deserve answers."