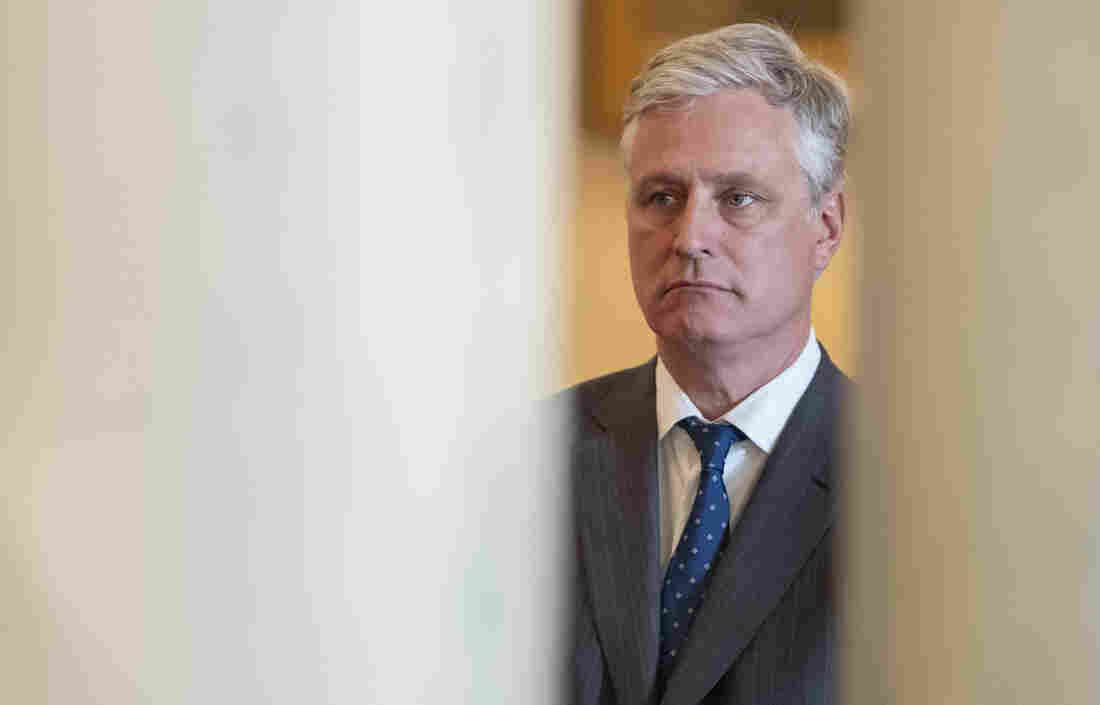 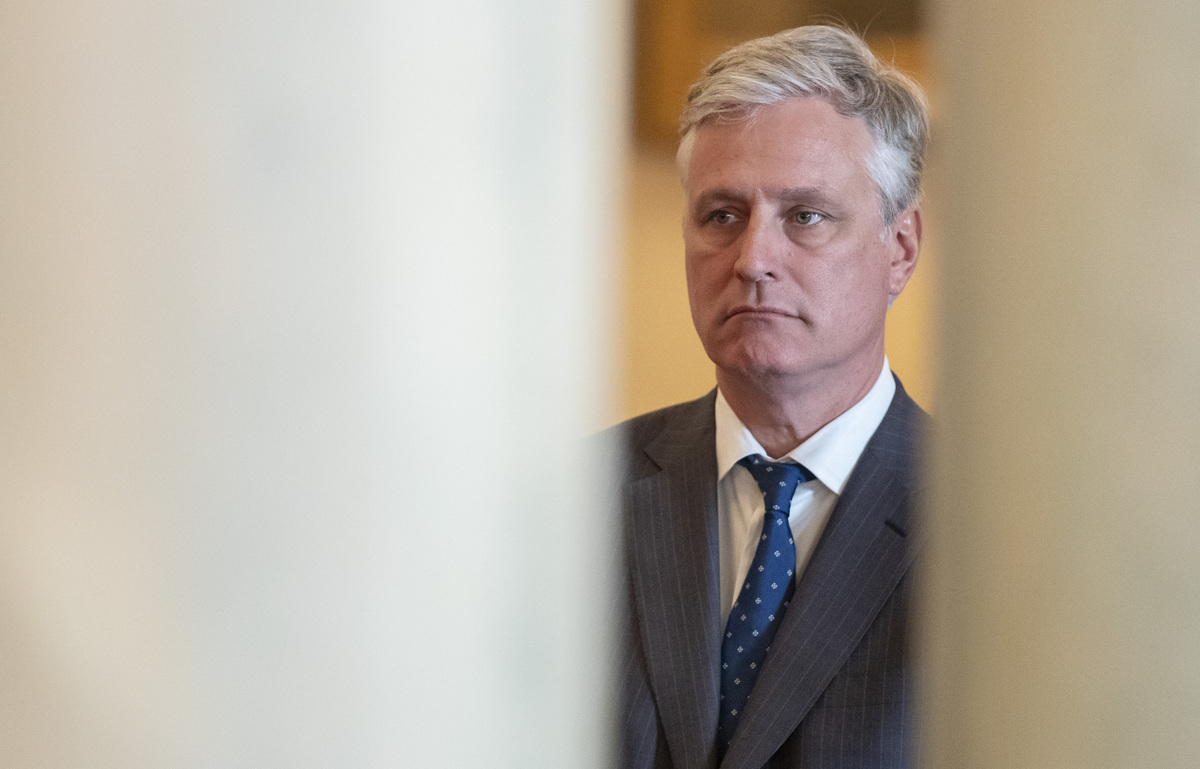 National security adviser Robert O'Brien speaks with Morning Edition host Steve Inskeep about tensions with Iran and the future of the U.S. presence in the Middle East following the killing of Iranian Gen. Qassem Soleimani.

Steve Inskeep: As you know very well, there were some lawmakers who were not fans of the briefing that you gave them yesterday. Democrats were unhappy, but also a few Republicans like Mike Lee. Why do you think you were unable to give the answers that some lawmakers wanted?

Ambassador Robert O'Brien: So I did not do the briefing yesterday. It was Secretary [Mike] Pompeo, Secretary [Mark] Esper, Adm. [Joseph Maguire], and Gina Haspel, director of the CIA.

I've heard from a lot of people that it was a fantastic briefing. So there's always mixed reviews on those, depending on what people's viewpoint is on the subject matter. Mike Lee's a friend of mine, and someone who I greatly respect and the president really respects. And so I was disappointed to hear that he wasn't happy with the briefing. But I've also heard from other senators, including Chairman [James] Risch of the Senate Foreign Relations Committee — he thought it was one of the best briefings he'd ever had. So I think there's there's always mixed reviews on these things.

Mike Lee was especially concerned about where the president saw the limits of his power. As you know, the president ordered the killing of a very senior Iranian military figure, and the hypothetical was asked in this meeting, we're told: Would the president ask Congress before deciding to have the supreme leader of Iran killed? What is the answer to that question?

Well, we never answer those sorts of hypotheticals, but I can tell you, it's been longstanding presidential practice when you have a military operations, particularly sensitive. So, for example, when President Obama took out Osama bin Laden, those things don't happen with pre-briefs to Congress. But we made certain in this case that Congress was made aware of the military operation against Soleimani immediately after it happened. They were made aware in both written form and in calls, the Gang of Eight and senior leaders to Congress. And there were the briefings of Congress. But we feel that we're in full compliance with obligations for briefing Congress. It's important that, as elected representatives of the people, they should know what's happening. And that's an obligation the president takes very seriously.

Well, look. The United States always maintains the right to self-defense. The United States military units and the president, as commander in chief, has the Article 2 power to maintain the security of the United States. And in this case, with respect to Soleimani — I'm not going to talk about hypotheticals about others — Soleimani was in the act of planning attacks against Americans. We knew that we had very good intelligence on that front. And it's always a risk when you engage in a military operation of this nature. But there was a risk if we didn't. If we didn't engage in this operation and the attacks had taken place and many Americans would have been killed, there would've been plenty of people that would have criticized us for not having disrupted the attacks.

Did you know the time and place of the attacks that were being planned?

We had very good intelligence that there was an imminent attack being planned.

But time and place?

It was imminent. You know, you never know the time or place of these things with with perfect particularity. But we had very good information that there were imminent attacks planned against Americans in Iraq and potentially Syria. Both diplomats and soldiers, sailors, airmen, Marines. I've seen the intelligence and it was it was incredibly strong intelligence. There are a lot of people that want that intelligence released. You know, look, I wish we could, but at the same time, we don't want to compromise sources and methods that allow us to protect Americans.

Well, look, we've made it very clear that when Iranian proxies that are directed by Iran attack Americans, that we're going to hold the Iranians responsible. And they understand that. And you know that's one of the reasons why we had to engage in a number of military operations recently. Remember, these were not shots, these were not first shots fired by the United States. The first shots were taken by the Iranians and their proxies against the United States of America. They killed an American citizen, wounded our servicemen. And the president has made it very clear that if you harm Americans, if you kill Americans, you'll be held responsible. And that's what happened with [Abu Bakr] al-Baghdadi. It's what happened with with Qassem Soleimani. The president takes a very hard line against people that are that are planning or killing Americans or harming them.

Do you have information that Kataib Hezbollah, the Iraqi militia most closely involved here, or other Iranian proxies are planning attacks against U.S. interests at this time?

They have in the past. I don't have any specific information about attacks that they're planning at this time. But they have attacked Americans in the past. And so we're keeping a close eye on them and we'll monitor the situation on an ongoing basis.

The conflict with Iran, obviously, is more than 40 years old. This most recent phase of intense conflict seems to be getting rather long term also. It may last for years for all we know. Is this the best long term strategic application of American power?

Well, the best application of American power is to go forward with a maximum pressure campaign, which we've been involved in since the president pulled out of the JCPOA [Joint Comprehensive Plan of Action].

I mean, focusing on Iran as opposed to anything else that may be going on in the world. Is this the best place to be putting this much attention for a long period of time?

We focus on the entire world all the time. So, I mean, we have issues going on in Venezuela. We've got issues going on in the DPRK, North Korea. We're very concerned about the rise of China over the long term. They've turned out to be an unfair competitor with the United States, stealing our intellectual property, stealing plans for our most sophisticated military equipment. The Chinese are spending tremendous amounts of money building new ships and submarines every month, building new aircraft carriers. So there are a lot of places where we have concern. We're concerned about Russia. Russia has announced the introduction of a new hypersonic missile recently. So we've got a lot of concerns around the world and we're watching all of them. Iran is one of those. And we'll take care of business as it comes up.

The president has said he wants to get out of endless wars in the Middle East, which can be seen as a large strategic thought to focus instead on things like China and Russia. Does the president's own focus on Iran get in the way of his own goal?

Oh, not at all. Look, Iran is a huge problem in the Middle East. They're the largest state sponsor of terrorism. They're behind the genocide in Syria. They're supporting the Houthis in the civil war in Yemen. They're supporting Hezbollah, a terrorist organization in Lebanon. They're closely aligned with Bashar al-Assad in the Syrian conflict, which has claimed the lives of half a million people. So one of the ways to get out of the Middle East and for the U.S. to not have the footprint that we do there is to end Iranian hegemony in the region and to get Iran to start acting like a normal country. If that happened, that would that would hasten our ability to deploy forces elsewhere, not tie us down.

Don't you assume that would be a years-long project at best? Don't you have to assume that?

Look, there are many, many things in world affairs that are years-long projects. I mean, that was one of the problems with the JCPOA. The JCPOA had a sunset clause.

The Iran nuclear deal. Under the JCPOA, Iran could start buying sophisticated missiles just like the ones that they shot at us the other night. They could buy those on the open market. They could buy battle tanks, they could buy helicopters, jet aircraft. That all happens this year under the JCPOA, another couple of years under the JCPOA, I think 2024, Iran could start a nuclear program without any supervision. Things take years. And that's why the JCPOA was so short-sighted because it was a it was a short-term agreement. They gave Iran the money to finance their operations through the Middle East and yet didn't have a long-term solution to either their financing of terror, their nuclear program or their ballistic missile programs. That's one reason we got out of it. We're gonna try to have a permanent solution.

Back when I first asked to come talk with you some days ago, I thought it was a quiet start to the year and we'd have an opportunity to thoughtfully talk about the year and what the threats might be. What do you see as the biggest threat facing the United States over this year that has now begun?

Well, look, the biggest threat that we face, the biggest threats we face, are laid out in the president's national security strategy, and that is pure competition. So we have long-term threats, the United States, from peer competitors like China and Russia. We need to be prepared for those.

Peer competitors because China has a big economy, as the U.S. does; Russia has a big nuclear arsenal. That's what you mean right?

And they're authoritarian regimes. You know, the Chinese don't have a democracy, they don't share our values. They're a very wealthy country. They're plowing much of that wealth into new military equipment that could threaten the United States or allies. At the same time, there's a huge opportunity to work with the Chinese. And so the president has just concluded a phase-one trade deal with China that we expect to be signing next week. So that's good news. So the point is we have to push back on the Chinese where they're engaged in unfair competition. At the same time, we have to show that we're prepared to deter any sort of Chinese aggression against the United States or its allies. But we think we can work with the Chinese. We want to have a great relationship with the Chinese, we want a great relationship with the Russians. But but those are the major challenges to the United States. But there are subsidiary challenges. There are challenges in Iran, there are challenges in North Korea, DPRK, there are challenges in Venezuela. So we're keeping an eye on all those as we go into 2020.

Is it awkward that you asked the Chinese for help on something like Iran, even as you push back on the Chinese on trade and you worry about their strategic competition?

No, look, that's how foreign affairs works. There are areas where we have common interests with the Chinese or the Russians and where we have common interests fighting terrorism, seeking to limit the DPRK nuclear and ballistic missile program. We'll work very closely with them, there are opportunities for trade with those countries. So we want to have good relationships with those countries, but where we disagree with them — whether it's Hong Kong, or the treatment of the Uighurs, or the some of the corrupt practices taking place in Chinese development projects in Africa or the Pacific Islands — we'll push back there.

Ambassador O'Brien, thanks for your time.

It's great being with you, Steve. Thank you.