Accessibility links
House Approves Resolution Curbing President Trump's War Powers With Iran The vote, less than a week after the president approved a drone hit on an Iranian general, was mostly along party lines. In the Senate, Democrats are hoping to win GOP support for a similar measure. 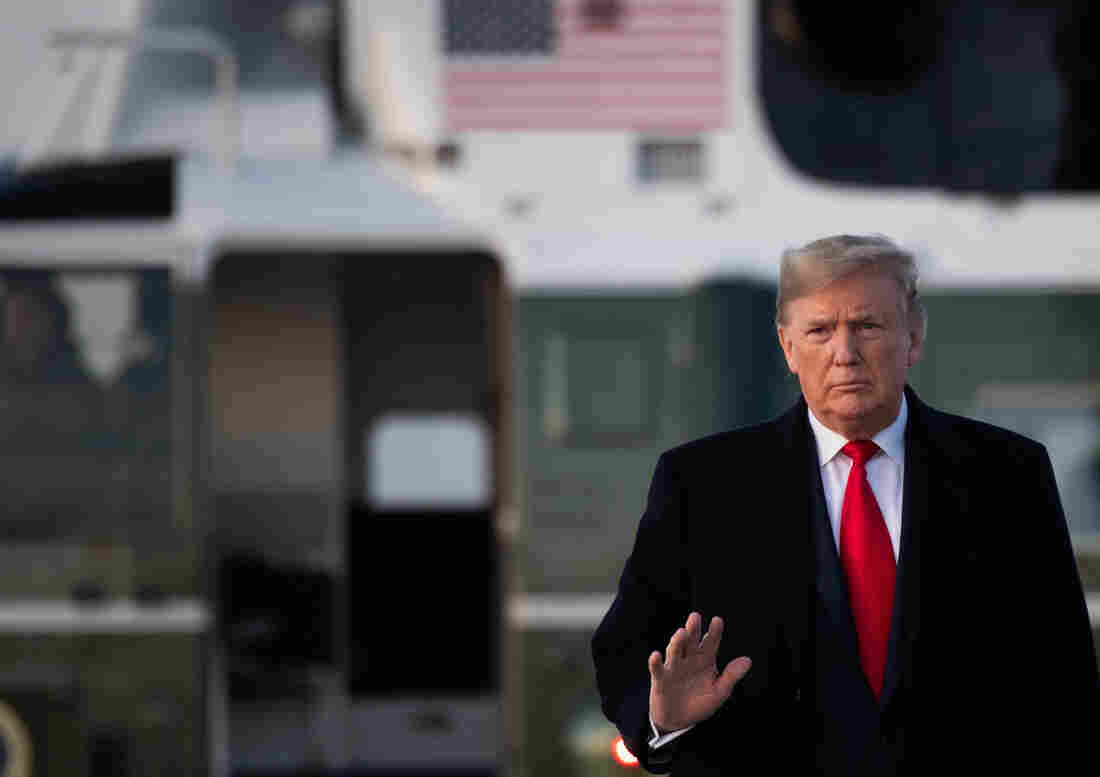 President Trump maintains he has the power to take action against Iran under previous war authorizations passed by Congress. Saul Loeb/AFP via Getty Images hide caption 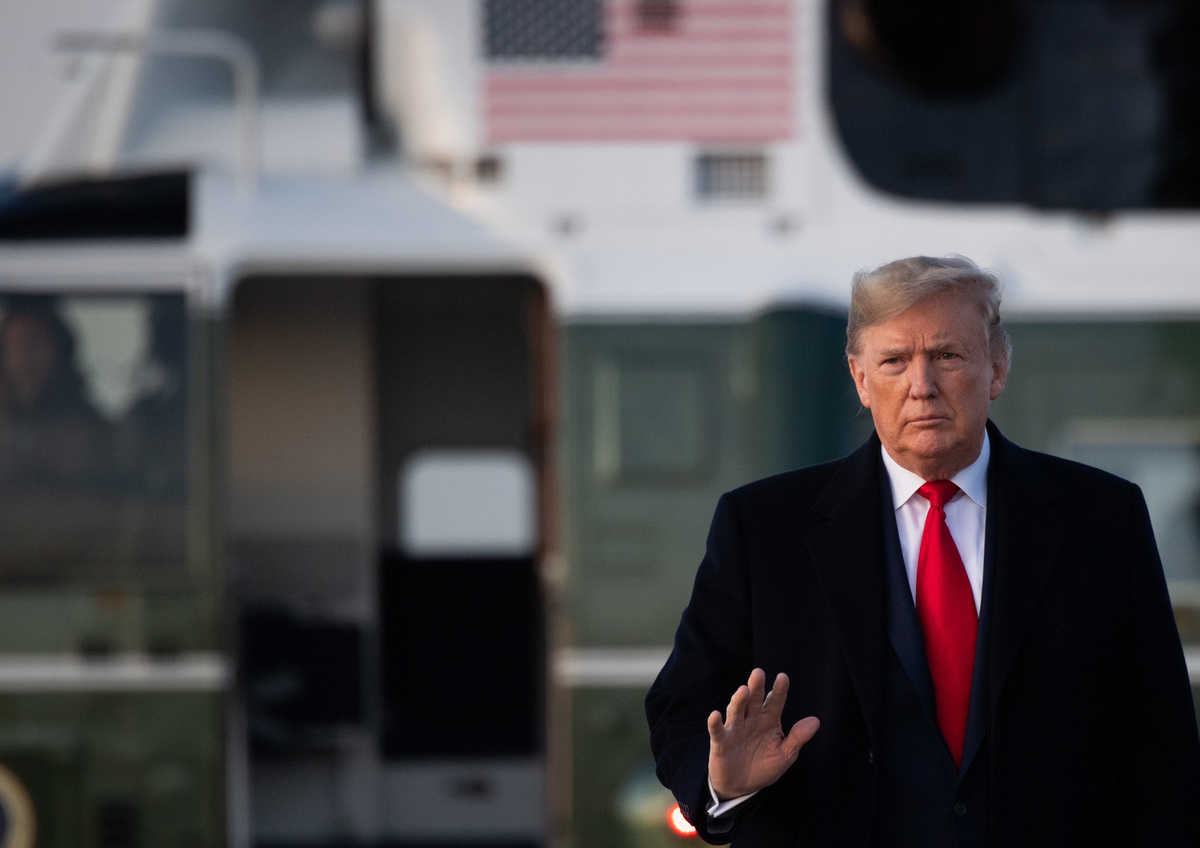 President Trump maintains he has the power to take action against Iran under previous war authorizations passed by Congress.

The House of Representatives approved a resolution that would force President Trump to seek consent from Congress before taking new military action against Iran.

The move comes nearly a week after President Trump greenlighted a U.S. drone strike that killed a top Iranian general and led to increased tensions with Tehran.

The nonbinding war powers resolution was approved in a mostly party-line vote of 224-194. Only three Republicans and one independent joined Democrats to pass the measure. Eight Democrats opposed it.

The Senate could consider a similar measure — but one that has the force of law — as early as next week, but it is unclear if it has enough votes to clear the chamber. Trump administration officials maintain the president already has the authority to take action against Iran under a 2002 war authorization passed by Congress in the wake of the Sept. 11 attacks.

The House vote also comes after briefings for lawmakers on Wednesday from top Trump administration officials left Democrats — and some Republicans — unhappy with a lack of transparency about what fueled the decision to strike the Iranian general.

"You would think anytime we would engage in such an important change in approach that we would be working together, consulting together, respecting the approach that each sides takes to all of this and hopefully be on one side of it all," House Speaker Nancy Pelosi, D-Calif., said ahead of the resolution's passage. "What this does is very important for the security of this country."

The measure was sponsored by Rep. Elissa Slotkin, D-Mich., a former CIA analyst who worked on Middle East policy.

In response to the vote, the White House said the president "has the right and duty to protect this nation and our citizens from terrorism. That's what he continues to do, and the world is safer for it."

"This House resolution tries to undermine the ability of the U.S. Armed Forces to prevent terrorist activity by Iran and its proxies, and attempts to hinder the President's authority to protect America and our interests in the region from the continued threats," White House Spokesman Hogan Gidley said in a statement Thursday evening. "These Congressional actions are completely misguided. In fact, this ridiculous resolution is just another political move because, under well-established Supreme Court precedent, it's non-binding and lacks the force of law." The White House reiterated its stance that the killing of Gen. Qassem Soleimani was authorized under "his constitutional powers as Commander in Chief and Chief Executive as well as the 2002 Authorization for Use of Military Force."

President Trump also addressed the vote at a campaign rally Thursday night in Toledo, Ohio, and mocked the idea of consulting Congress while carrying out an operation like the killing of Soleimani.

The war powers measure crafted by House Democrats was written as a concurrent resolution, which is traditionally considered nonbinding and doesn't require the president's signature.

Earlier Thursday, Pelosi said they purposely took this approach to ensure that the chamber could send a clear message to the president.

The concerns touch on a years-long discussion over whether the president's war powers are woefully outdated. Under the Trump administration, Democrats and some Republicans have renewed calls for new legislation addressing the president's authorization for use of military force.

Congress has debated how to craft a new AUMF specifically focused on Iran, but it has failed to get consensus on language that would satisfy the broad ideological spectrum that wants the legislative branch to reassert its power to declare war.

"This concurrent resolution is misguided, and its adoption by Congress could undermine the ability of the United States to protect American citizens whom Iran continues to seek to harm," the statement from the Office of Management and Budget on the administration's policy said.

A series of Trump allies and House Republicans also expressed their opposition to the measure on the House floor on Thursday. They argued that Trump used the authority given to the president under an authorization of approved after the Sept. 11 attacks.

House Minority Whip Steve Scalise said that Trump was working well within his war authorities by striking out against Iran and that the move to kill Iranian Maj. Gen. Qassem Soleimani ended the life of an "evil terrorist."

"This place is a safer place with Soleimani gone," the Louisiana Republican said.

However, some Senate Republicans have expressed interest in recent days to support a similar measure in their chamber.

Virginia Democratic Sen. Tim Kaine, who is sponsoring the war powers resolution, says he could bring up his measure for a vote as early as Tuesday. He said it would likely have to be coordinated with a potential trial if articles of impeachment are sent to the chamber beforehand.

Sens. Rand Paul, R-Ky., and Mike Lee, R-Utah, have already said they will support the measure. And Sens. Susan Collins, R-Maine, and Todd Young, R-Ind., have also been in talks with Kaine about the legislation and could line up support.

"We are at the brink of war right now. So I think the stakes are much higher now," Kaine said in arguing for the measure. "I think it increases the necessity of the bill."