Accessibility links
Even As He Died, Édouard Manet Made Life-Affirming Art In his last years, as he was dying of complications from syphilis, artist Édouard Manet was in agonizing pain — but you'd never know it from his exquisite flower bouquets and vibrant portraits.

In his last years, as he was dying of complications from syphilis, artist Édouard Manet was in agonizing pain — but you'd never know it from his art. As he neared the end (he died at just 51) Manet was painting exquisite flower bouquets and vibrant portraits — vigorous, life-affirming canvases. The J. Paul Getty Museum recently collected paintings from the end of Manet's life in their exhibition Manet and Modern Beauty.

Vase of White Lilacs and Roses, his second to last work, done two months before his death in 1883, is an exuberant burst of energy that practically spills off its frame. Dots of white dance on the canvas like rice at a wedding. 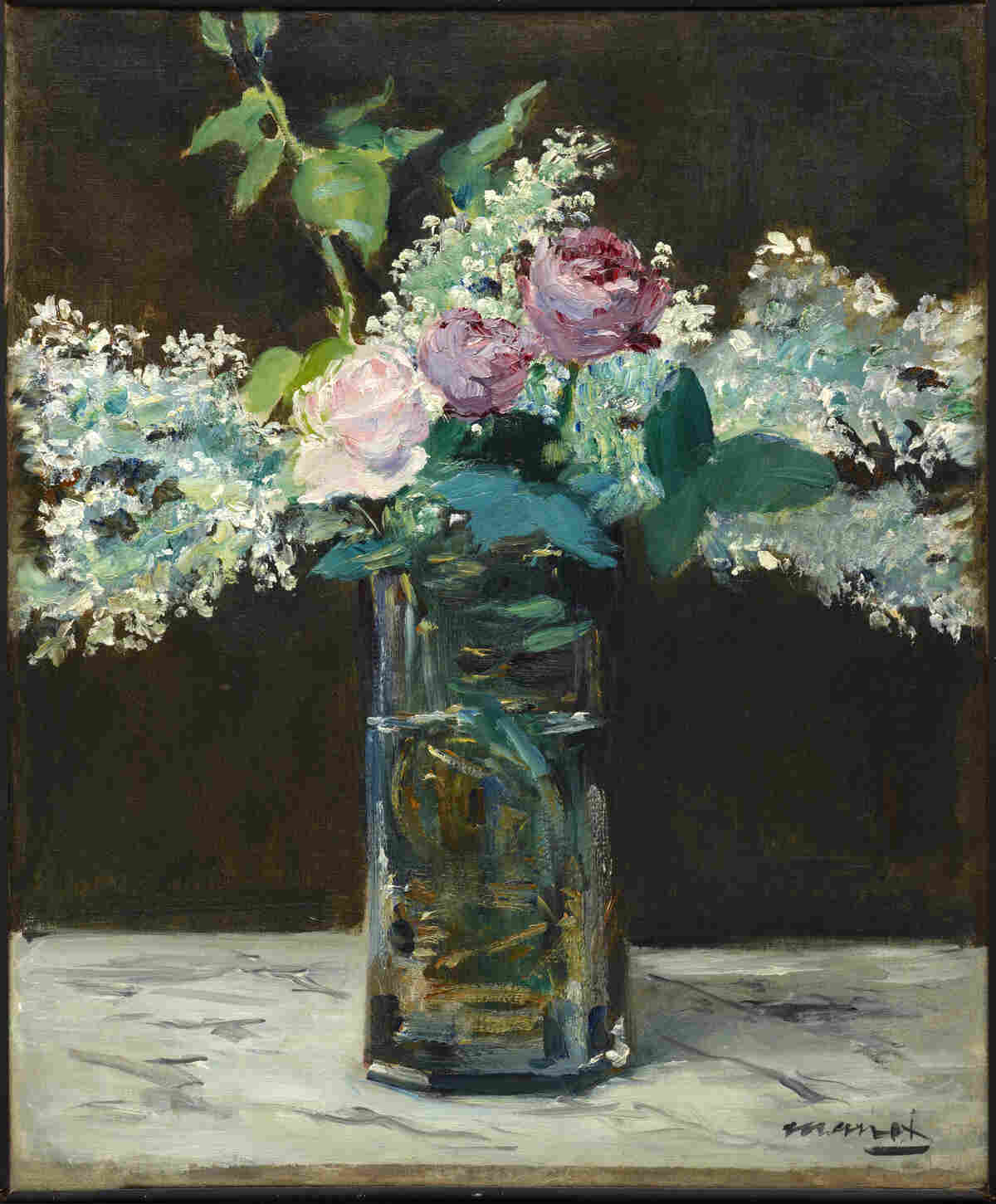 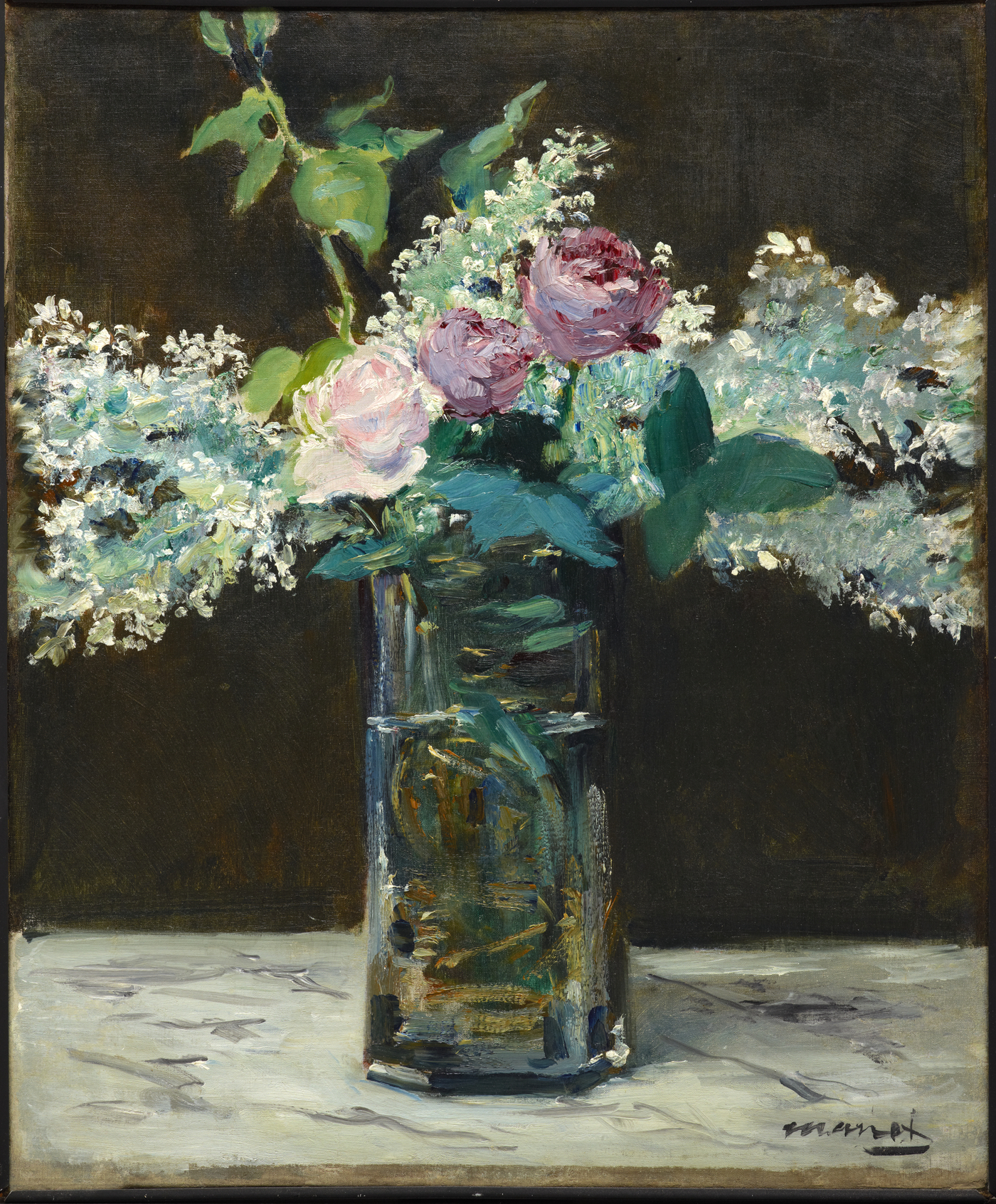 Manet also painted some marvelous portraits in those years, which included flower motifs. Jeanne, (also called Spring) is the picture of that season, her dress sprinkled with flowers, a few on her bonnet as well. 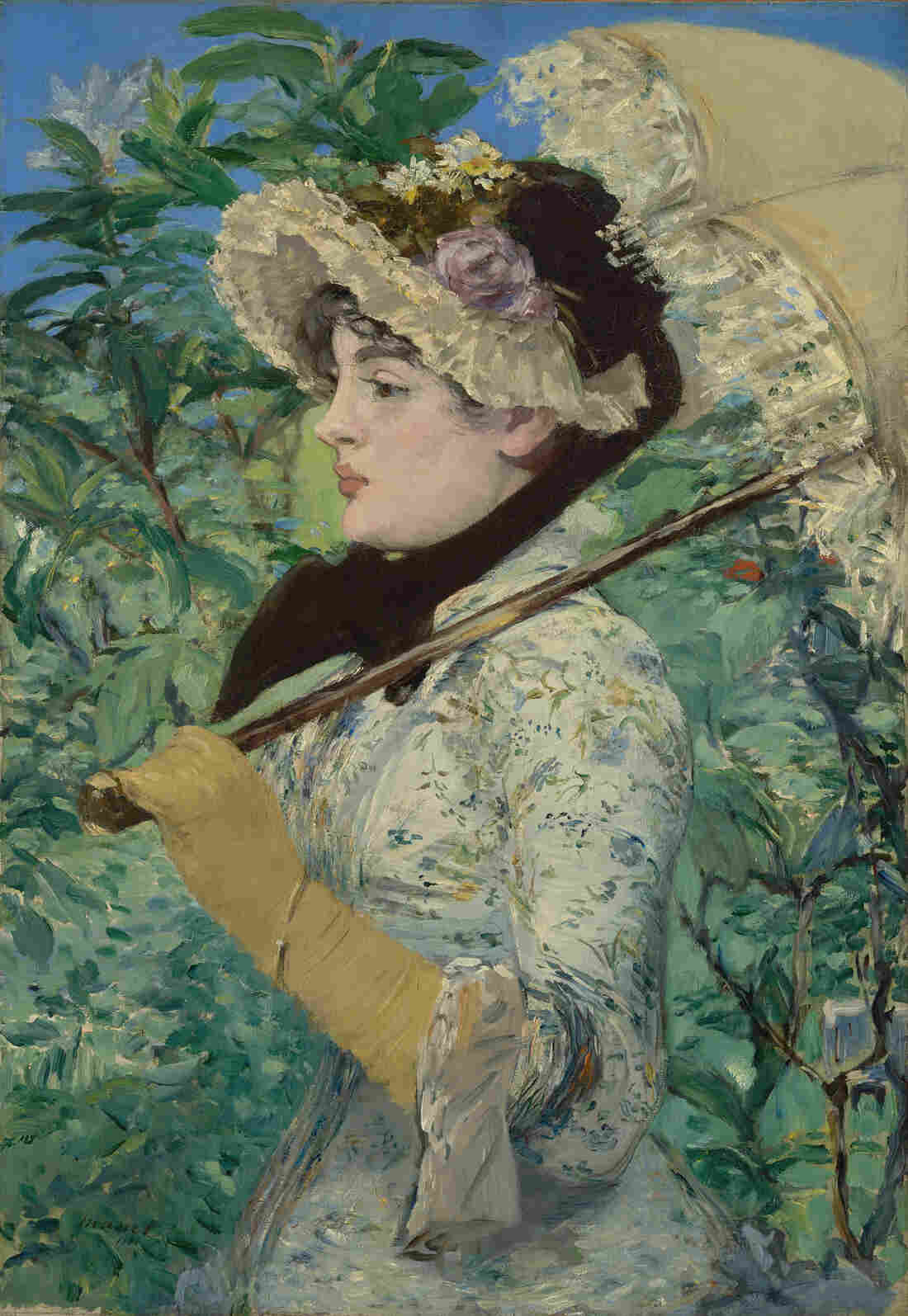 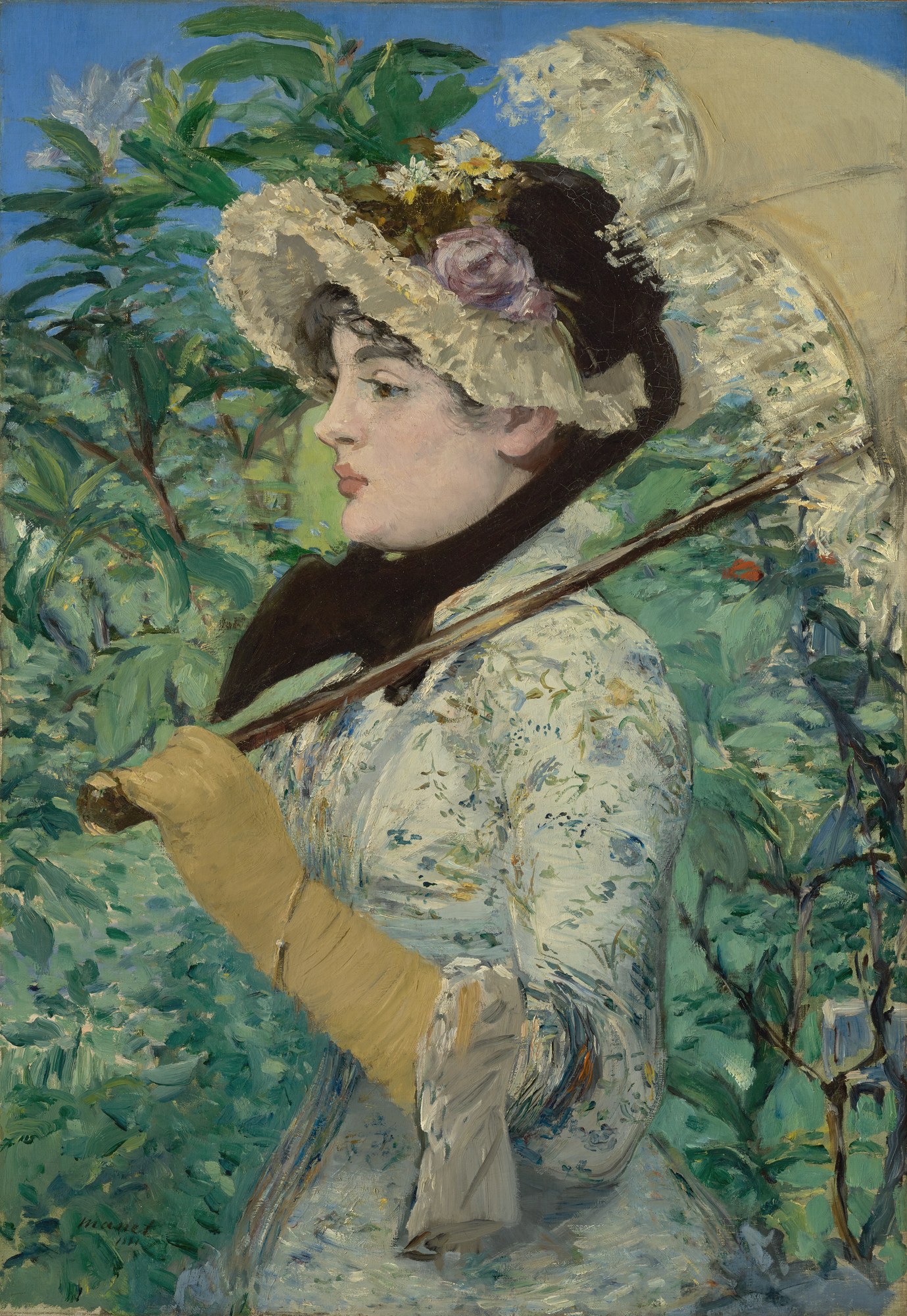 And the garden in the background of Woman Reading from around 1879-1880 is a blooming frame for Manet's black-clad lady. Above the black jacket, there's burst of energy in the scarf around her neck — a rush of dashes of whites and grays and air. 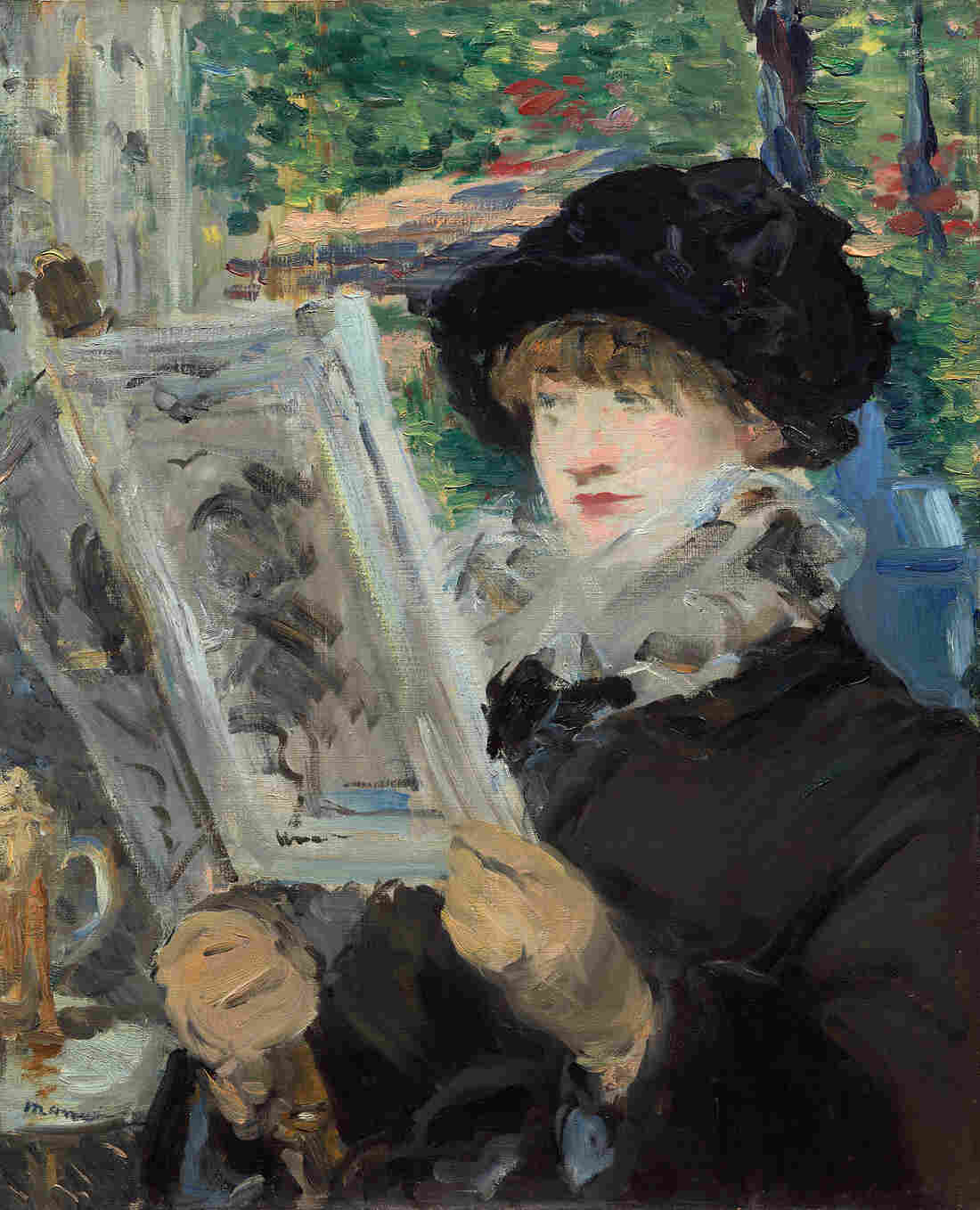 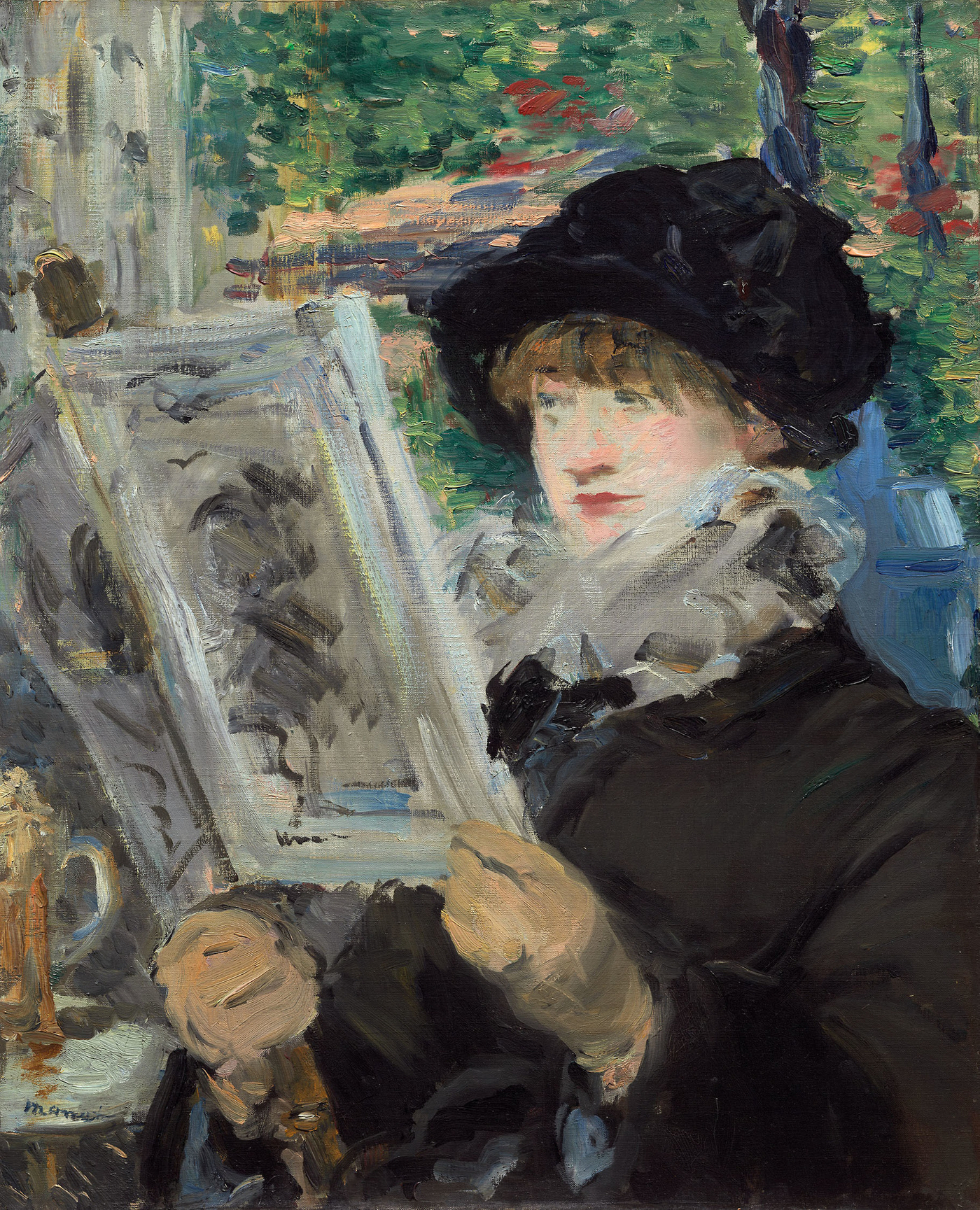 These techniques — the quick strokes, the jots of paint, came late in Manet's career. His earlier paintings (which aren't included in the Getty exhibition) were more formal, more finished. Several were controversial, and made him not only famous, but also notorious — scandalous, in fact.

Le Déjeuner sur l'herbe (The Luncheon on the Grass), painted in 1863, shows two men, dressed in coats and ties, sitting down for a picnic with a completely nude female companion. Not a stitch on her — nor a blush! She stares at the viewer with a slight smile and a come-what-may stare. The work was so scandalous it was rejected by the jury of the Salon — the men who gave thumbs up or down about what would be exhibited every year.

Equally shocking that same year was Manet's Olympia, which depicted a nude woman lying supine on a bed. At her feet — a black cat puffs up its back. Her maid stands near, holding a gorgeous bouquet of flowers. Who is this bare femme? A prostitute, goes the theory, receiving thanks from a happy customer. It got shown in the Salon two years after Manet created it, to the ridicule — derision really — of critics. "They're raining insults upon me," he told a friend.

Now, men had been painting nudes for centuries by the time Manet displayed Olympia. But never women with such level, frank, "who cares?" gazes. And earlier nudes rarely were painted with surfaces that invited viewers to see the brushstrokes.

The Impressionists, who came up almost 10 years later, admired Manet's brushwork, and made it even freer. And in the later works at the Getty exhibition — those colorful, graceful bouquets in particular — Manet's brush just flits and flirts across his canvases. He stopped saluting classical artists like Velázquez and Titian, and became the man admired as the first Modernist painter. 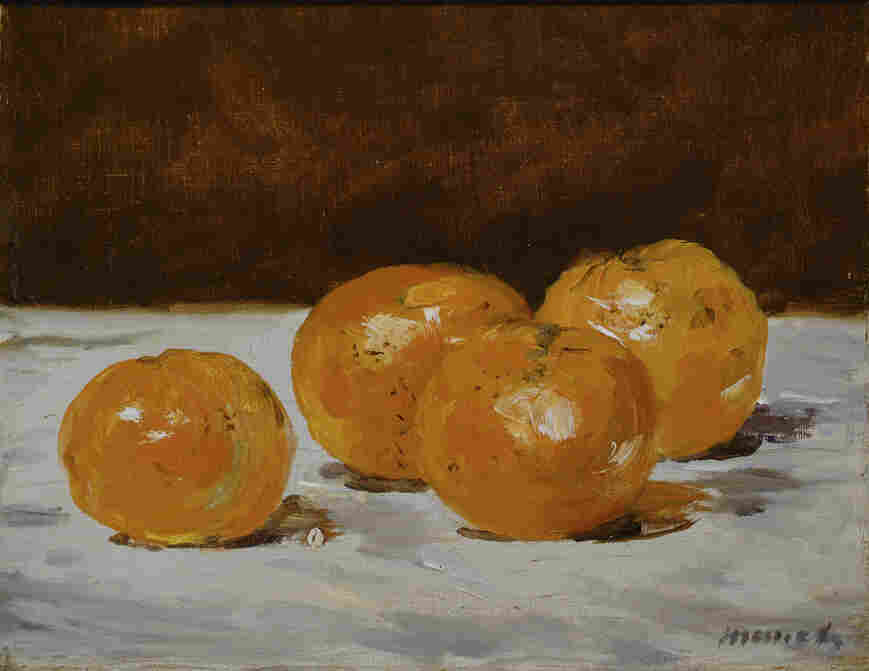 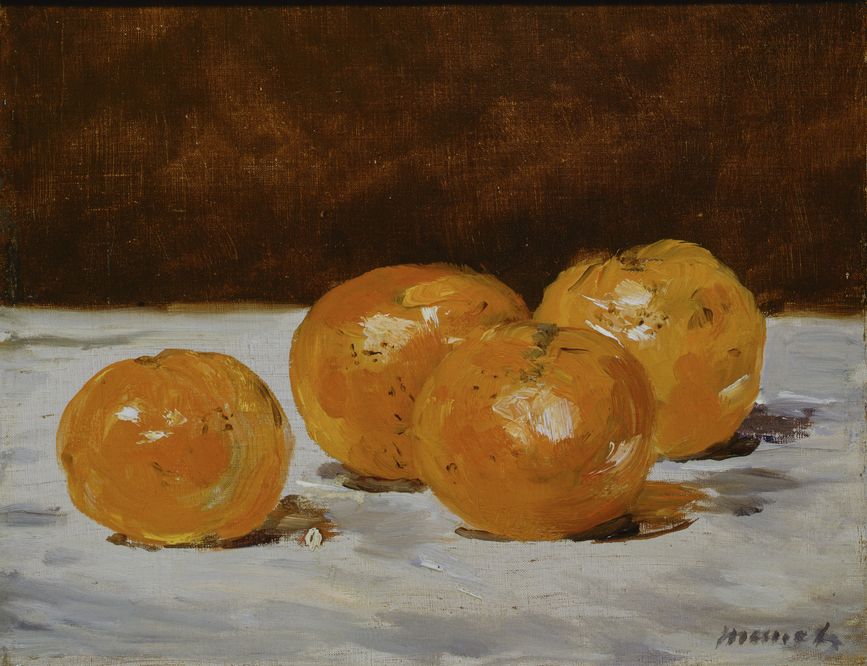 So Manet went out in a blaze of color and sparkle — artistic acts of bravery and bravado. The curators put all that dazzle in the galleries. But they chose, as the last work to exhibit, a piece called Two Roses. The flowers lie on a marble table top, pale, almost exhausted-looking. "There's something so incredibly fragile about these flowers," says Getty co-curator Scott Allan. "You feel they could wilt and die as you look at the painting."

Manet had been a bon vivant all his life. A man about town, sociable, debonair. With his vivid flowers — and oranges and some apples and peaches, he maintained the facade. By then it was an illusion, but like his art, it was an illusion he perfected. Co-curator Emily Beeny says Manet's last surviving letter to a friend read: "I'm getting better and better."