Accessibility links
Ukrainian Plane Crash In Iran: Accusations, Denials Exchanged Amid Investigation U.S. and Iranian officials on Friday offered dueling assertions of what caused the crash. Secretary of State Mike Pompeo blamed it on an Iranian missile, while Iran said that was clearly not the case. 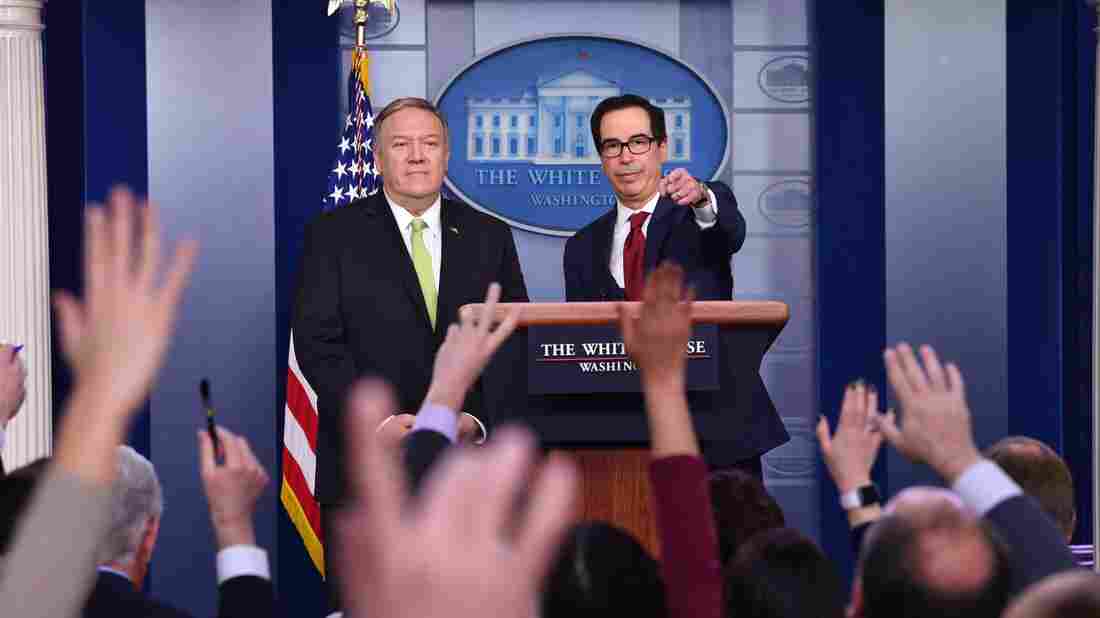 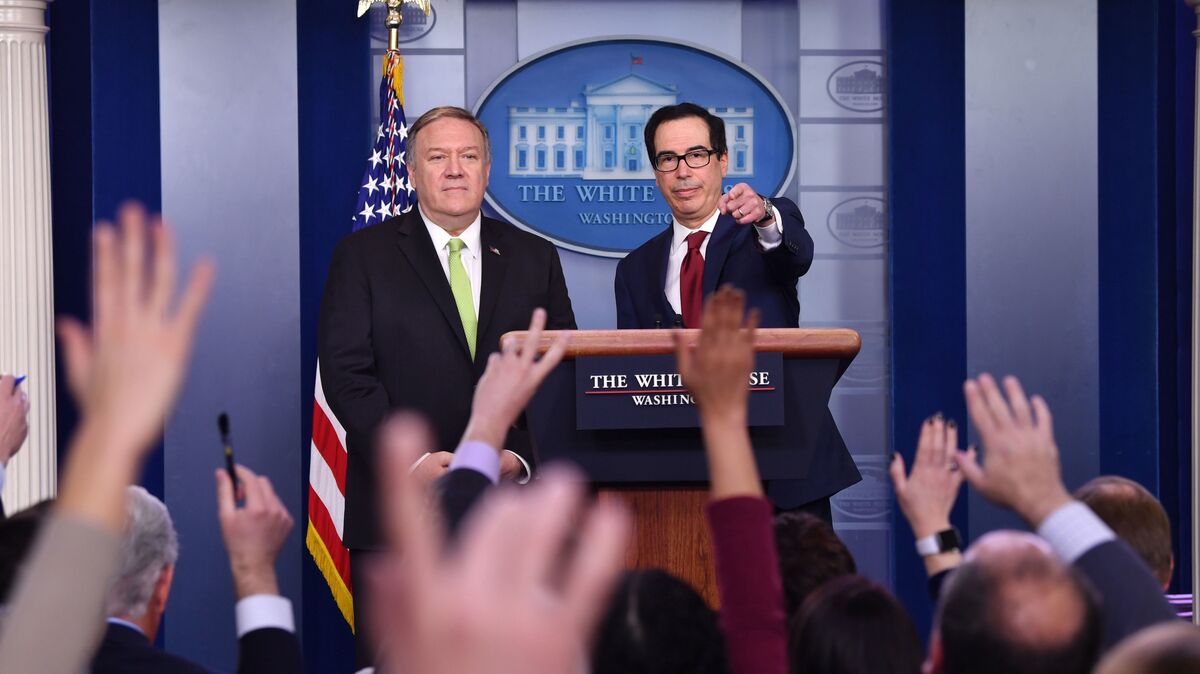 U.S. Secretary of State Mike Pompeo (left) and Treasury Secretary Steve Mnuchin take questions during a news conference Friday. They announced new sanctions against Iran and accused the country of shooting down a Ukrainian passenger jet earlier this week.

The question can be phrased simply: What happened to Ukraine International Airlines Flight 752? Answers, more than two days after the airliner carried 176 people to their deaths near Tehran, have proven much more difficult to come by amid a globe-spanning tangle of accusations, denials and generally heated rhetoric.

"We do believe that it's likely that that plane was shot down by an Iranian missile," U.S. Secretary of State Mike Pompeo told a news conference Friday, echoing an assertion made one day earlier by Canadian Prime Minister Justin Trudeau. The prime minister said the missile strike "may well have been unintentional."

During Friday's news conference, Pompeo and Treasury Secretary Steve Mnuchin announced new sanctions on the Iranian government for a separate attack on Iraqi bases housing U.S. troops. That missile strike, which came within hours of the Ukrainian plane crash, followed the U.S. drone strike that killed a prominent Iranian general.

Pompeo said the Trump administration planned to "let the investigation play out" before deciding whether to pursue further measures against Iran for the alleged missile strike on the jetliner. And regarding that investigation, he noted that he had been in touch with Ukrainian President Volodymyr Zelenskiy and Pompeo's counterpart in Canada, which saw 63 of its citizens killed in the crash.

Mnuchin added that the Treasury Department plans to issue waivers on sanctions to allow the National Transportation Safety Board — and any other individuals or agencies "that can help facilitate the investigation" — to work with Iran on the probe.

"When we get results," Pompeo said, "I'm confident we and the world will take appropriate actions in response."

Prior to those comments, Ali Abedzadeh, head of Iran's Civil Aviation Organization, pushed back against the claims of a missile strike during a news conference of his own Friday.

He told journalists that he didn't want to speculate — but "what is clear to us," he added, "and what we are certain about, is that this plane was not hit by a missile." And he called on the U.S. to publicize the evidence behind its assertion.

A team of investigators from Ukraine arrived in Iran on Thursday, and Iran has also invited specialists from the NTSB and Boeing to support the probe. Though some analysts and journalists have questioned the Iranian commitment to getting answers, saying authorities there quickly bulldozed the crash site and deposited the wreckage in a separate location. 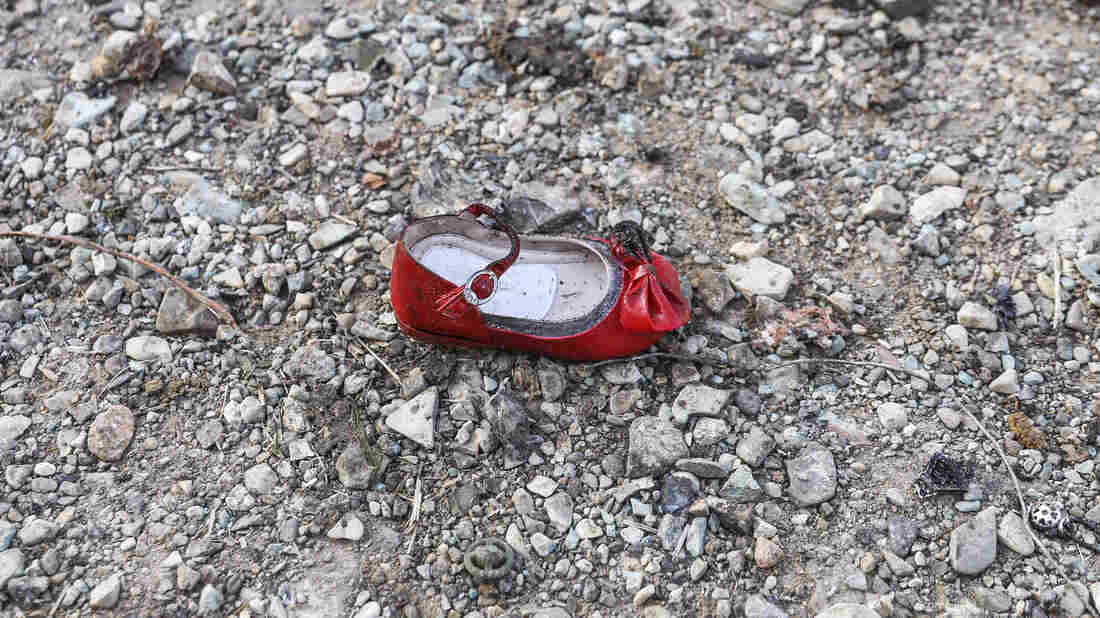 A child's shoe sits amid the rubble of the Ukrainian jetliner, which carried 176 people to their deaths when it plunged from the sky outside Tehran on Wednesday. Borna Ghassemi/ISNA/AFP via Getty Images hide caption 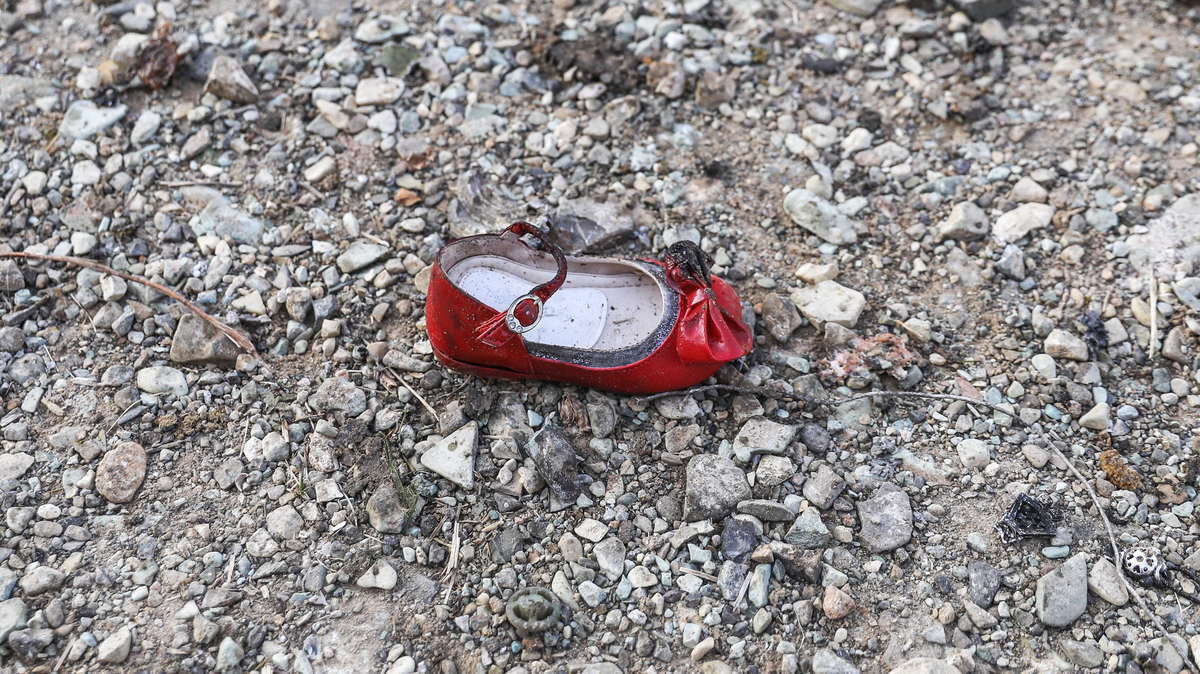 A child's shoe sits amid the rubble of the Ukrainian jetliner, which carried 176 people to their deaths when it plunged from the sky outside Tehran on Wednesday.

The diplomatic barbs traded by the U.S. and Iran on Friday represent yet another point of conflict between the two countries.

There were the violent protests targeting the U.S. Embassy in Baghdad last week, which American officials said were largely influenced by Iran. Then, days later, came the U.S. drone strike near the Iraqi capital, which claimed the lives of Iranian Maj. Gen. Qassem Soleimani and Iraqi militia commander Abu Mahdi al-Muhandis. Earlier this week, Iran launched missile strikes on military bases used by U.S. troops in Ain al-Assad, northwest of Baghdad, and in Irbil.

Those missile strikes, which resulted in no American casualties, unfolded right around the time that a mysterious set of circumstances unfolded near Tehran's international airport. It was there, southwest of the Iranian capital, that the Ukrainian jetliner turned around not long after takeoff, apparently seeking to return before going down. 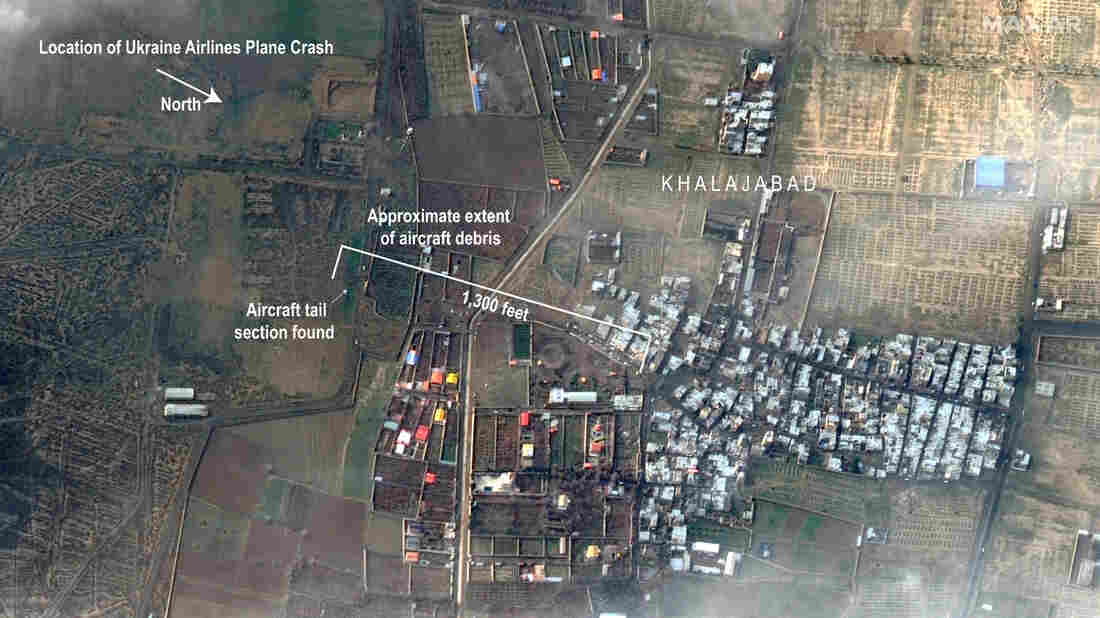 A satellite photograph provided Thursday by Maxar Technologies shows the site of the Ukrainian jetliner's crash and surrounding areas. Annotated on the image are the location and length of the debris field, southwest of Tehran. Satellite image ©2020 Maxar Technologies via AP hide caption 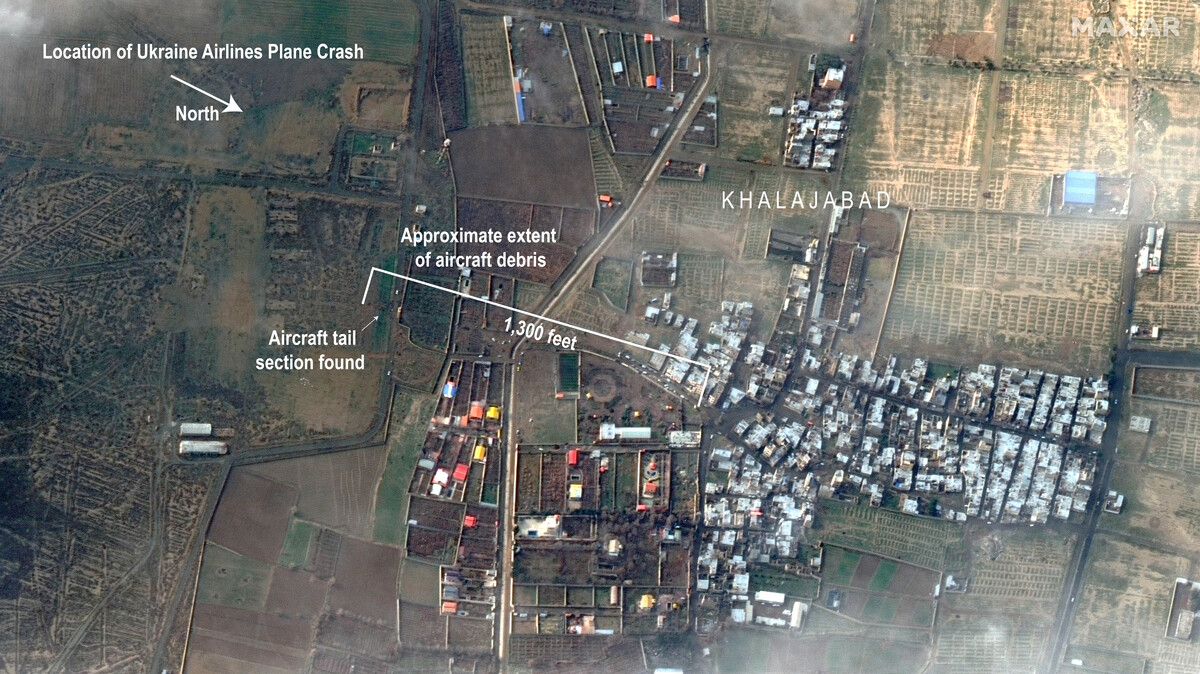 A satellite photograph provided Thursday by Maxar Technologies shows the site of the Ukrainian jetliner's crash and surrounding areas. Annotated on the image are the location and length of the debris field, southwest of Tehran.

Besides the dozens of Canadians aboard the flight, the plane also carried 82 Iranians and 11 Ukrainians, as well as passengers from other countries.

Kyiv has sent a contingent of Ukrainian investigators, who arrived Thursday in Iran. And Ukrainian Foreign Minister Vadym Prystaiko said at a news briefing Friday that the team had received the Iranians' full cooperation — including access to the plane's "black box" flight data recordings.

Ukrainian President Zelenskiy, following a phone call with Pompeo, expressed gratitude Friday for the "valuable support of the U.S. in investigating the causes of the plane crash."

"Information obtained from the U.S.," he added, "will assist in the investigation."

We are analyzing this new video supposedly showing a mid-air explosion. By our initial estimation, the video shows an apartment block in western Parand (35.489414, 50.906917), facing northeast. This perspective is directed approximately towards the known trajectory of #PS752. pic.twitter.com/nDvjRIkFU4

Others have waded into the diplomatic fray.

NATO chief Jens Stoltenberg said Friday that "we have no reason to not believe" the U.S. and Canadian assertions that the plane was downed by Iranian air defense systems. And Russia's first deputy representative to the United Nations, Dmitry Polyanskiy, chipped in to express the country's resistance to that position, pointing out that the U.S. has so far "refused to provide any satellite or intelligence data to shed some light on the incident despite numerous appeals from Russia."

Tangled as the situation may be, at least one answer feels fairly assured: It will take a while to find any satisfying answers.