Accessibility links
Australia's Wildfires Spark Disinformation Battle As They Take A Tragic Toll Researchers say bots and trolls blasted out hashtags such as #ArsonEmergency, in a campaign to steer the conversation about wildfires away from climate change and toward arson. 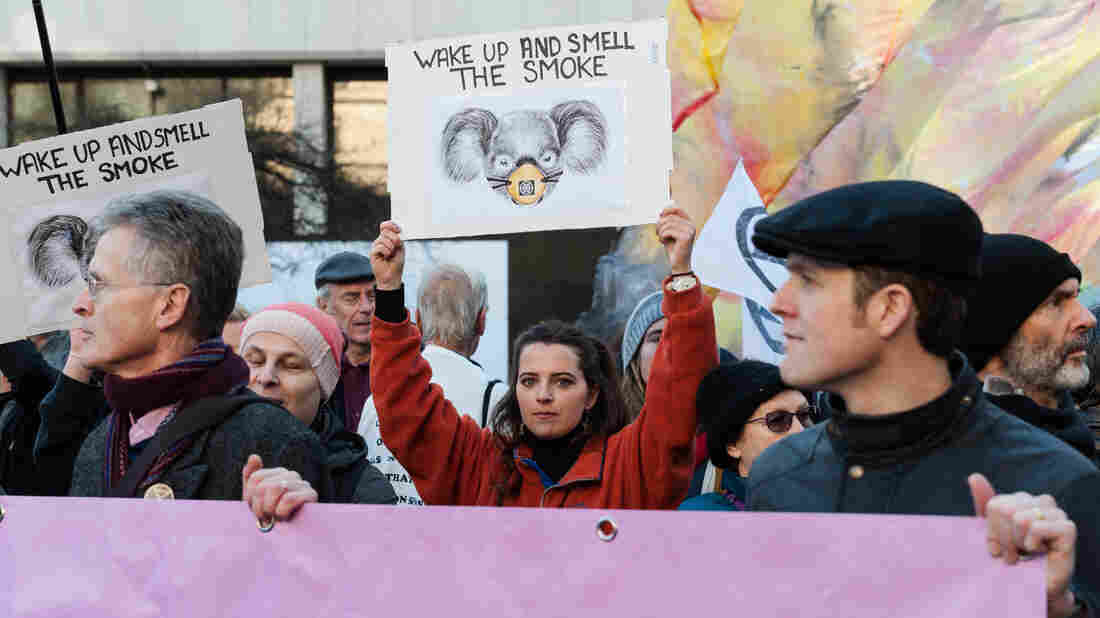 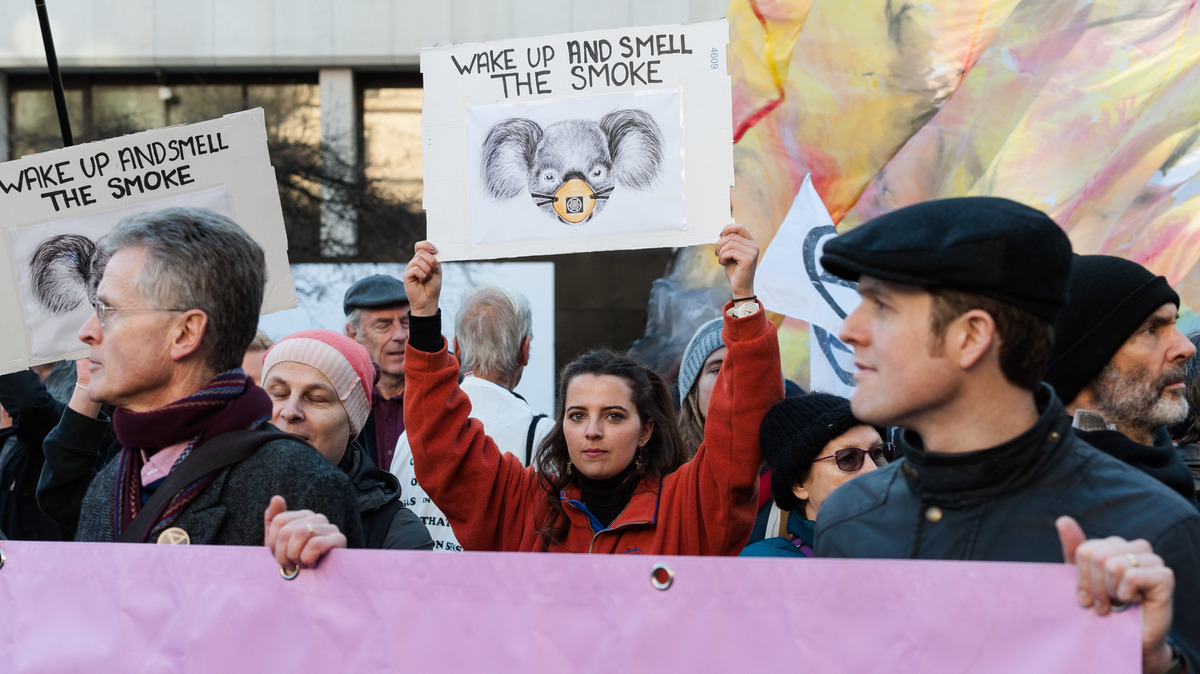 Activists protest outside the Australian Embassy in London, accusing Australia's government of inadequately responding to the fires and an overall climate emergency.

Australia is struggling to cope with deadly infernos and faces losing nearly a billion animals in the terrible bushfires — but in the midst of those tragedies, authorities are also battling hoaxes and misinformation, including false reports of widespread arson. Many of the claims seek to suggest that arson, not climate change, was a key driver of the historic fires.

The hashtag #ArsonEmergency began trending shortly after the new year. Queensland University of Technology researcher Timothy Graham says he identified troll and bot social media accounts that tried to shift the narrative about the fires as being the work of dozens of criminals.

"We studied about 300 Twitter accounts driving the #ArsonEmergency hashtag to identify inauthentic behavior," Graham said Friday in an essay for The Conversation, which he co-wrote with fellow researcher Tobias Keller.

"We found many accounts using #ArsonEmergency were behaving 'suspiciously,' compared to those using #AustraliaFire and #BushfireAustralia," they said. "Accounts peddling #ArsonEmergency carried out activity similar to what we've witnessed in past disinformation campaigns, such as the coordinated behavior of Russian trolls during the 2016 US presidential election."

just finished a first map of tweets on the same theme in Gephi..as ever not comprehensive due to search and API constraints, but enough captured to give a sense of the shape of the discourse. pic.twitter.com/dFBdFY8GHI

As for who mounted the social media campaign to push the arson narrative, Graham and Keller say that while software tools allowed them to identify bots and trolls, they weren't able to trace the bogus accounts to any specific people or entities.

While arson has historically been one of the causes of Australian wildfires, the country is facing an unprecedented bushfire disaster. Since September, fires have now consumed an area larger than the states of Massachusetts and New Hampshire combined. And a new "megafire" was created Friday when two blazes joined — covering nearly 1.5 million acres, as NPR's Scott Neuman reports.

The #ArsonEmergency campaign seems to have peaked around Tuesday, when thousands of tweets used the hashtag, Graham and Keller say.

Around the same time the bot campaign hit its crescendo, news stories about the wildfires also touted a police report in hard-hit New South Wales, where authorities recently announced that they have taken legal action against more than 180 people for fire-related offenses. But only a small fraction of those people face charges that might be construed as arson, and the figure also spans a period that began in late 2019.

The NSW police said that while 24 people were charged with deliberately lighting bushfires, 53 faced legal actions — which include a warning — for not complying with a statewide ban on fires. And the overall number also includes 47 people who were accused of not properly disposing of lit cigarettes or matches.

Conservatives in the U.S. also picked up on the arson thread, with President Trump's son, Donald Trump Jr., retweeting a post about the arrests in New South Wales.

Documenting a further convolution in the narrative, Australia's ABC reports, "Some of the misinformation includes the idea left-wing 'ecoterrorists' are behind some fires."

On Friday, an employee of Rupert Murdoch's News Corp in Australia raised concerns about the company's coverage of the wildfires, accusing the publisher of newspapers such as The Australian and the Herald Sun of carrying out an irresponsible "misinformation campaign."

"I find it unconscionable to continue working for this company, knowing I am contributing to the spread of climate change denial and lies," Emily Townsend, a commercial finance manager at News Corp, wrote in an all-staff email. She added that the newspapers' angles of coverage were "not only irresponsible, but dangerous and damaging to our communities and beautiful planet."

Townsend told The Sydney Morning Herald she doesn't regret that her email was leaked to the wider press. And a News Corp executive told the newspaper that Townsend was already in the process of leaving the company, having resigned in December.

Beyond arguments over the impacts of climate change, Australia's wildfires do have a real political aspect: Prime Minister Scott Morrison has frequently been criticized for his approach to the disaster, from his interactions with affected states to his recent vacation getaway to Hawaii as the raging fires destroyed communities back home. On Friday, protesters vented their anger at Morrison and the government by holding a large demonstration in Sydney.

Experts say the intense and widespread effects of Australia's wildfires are related to a number of factors, from the destructive nature of wind-borne embers — which swirl high into the air and help fires spread rapidly and unpredictably — to building standards that allow houses to be constructed out of flammable materials and planning regulations that don't enforce enough of a buffer zone around houses built in vulnerable areas.

Australia's fires are spreading more quickly and ferociously because of prolonged drought and hot weather — both of which are exacerbated by climate change — are providing copious dry fuel.

According to the Australian Institute of Criminology, most of the bushfires that are started by arson burn only around five hectares — a little over 12 acres of land. The government crime agency says most arson fires are started by young people in disadvantaged areas. The AIC lists these patterns:

"Communities with a high propensity for arson often have a high proportion of children under 15 and lower education levels, employment rates and household income than the national average (Muller 2009). Unfortunately, communities with this demographic profile are common on the outskirts of cities where there are opportunities for bushfire arson near at hand and consequently, the bulk of bushfire arson ignitions occur in this context."