Accessibility links
Trump Administration Announces Additional Sanctions Against Iran The new restrictions had been promised by the president after Iranian missiles struck an Iraqi air base, threatening American and allied service members this week. 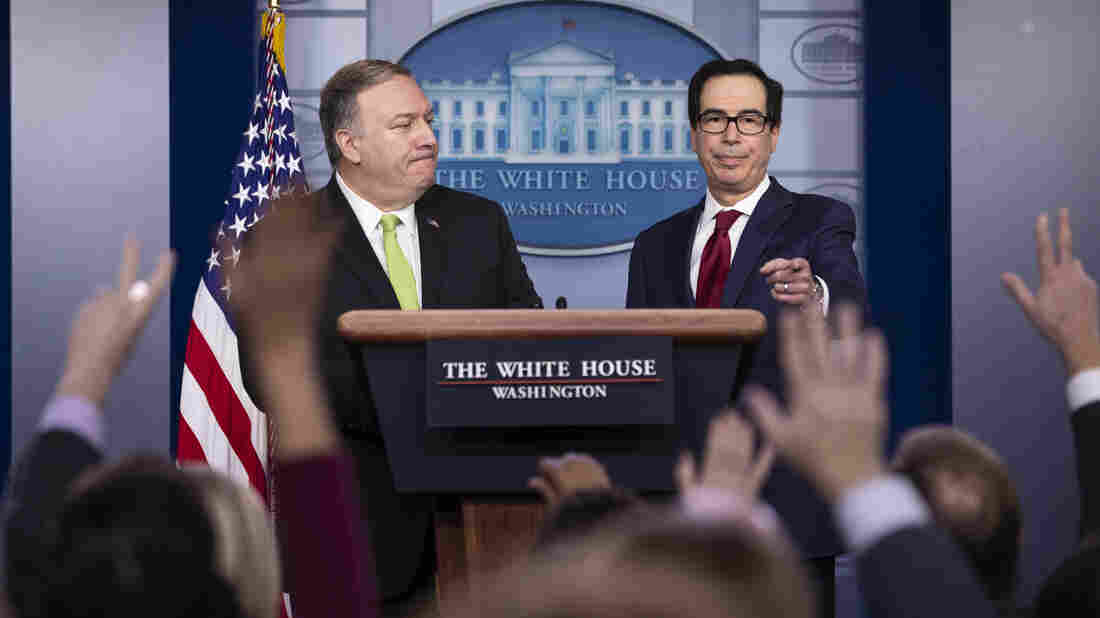 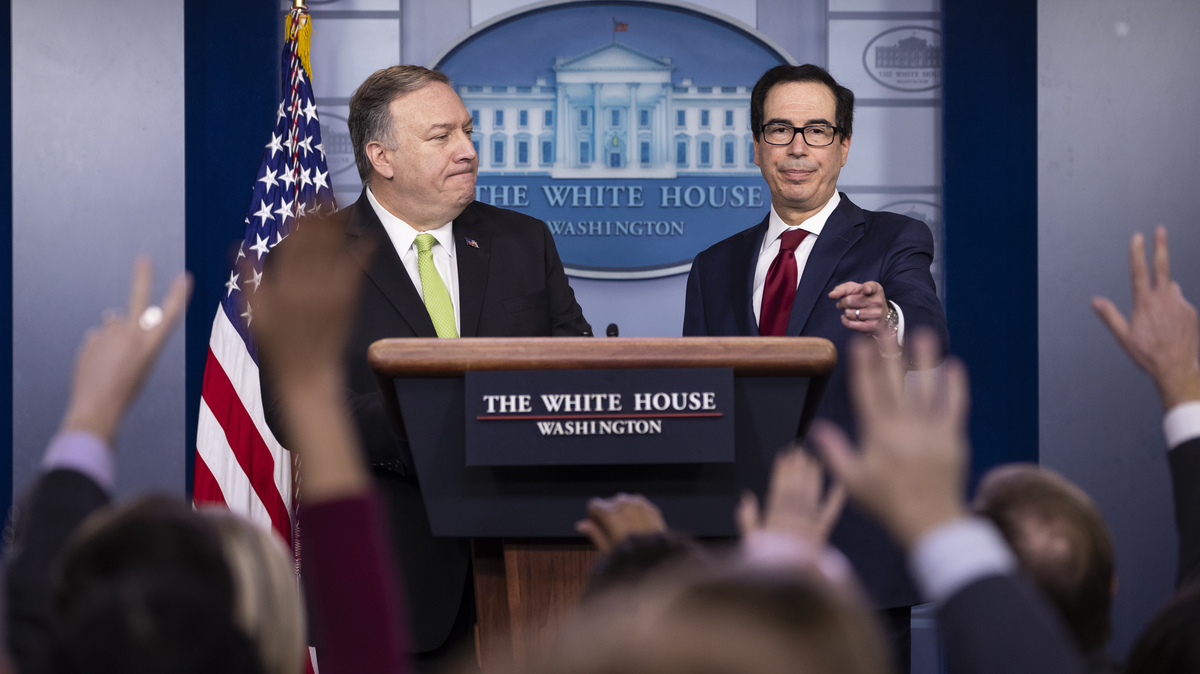 Secretary of State Mike Pompeo (left) and Treasury Secretary Steven Mnuchin answer questions about the new round of sanctions against Iran.

The White House announced Friday it is imposing additional economic sanctions against Iran, including officials in the Iranian government.

The penalties, promised earlier this week by President Trump, "will cut off billions of dollars of support to the Iranian regime," said Treasury Secretary Steven Mnuchin.

The restrictions are a response to Iran's missile attack on Ain al-Assad air base in Iraq, where U.S. and coalition service members are stationed. There were no injuries in the attack, but some of its facilities were damaged.

Speaking in the White House press briefing room alongside Secretary of State Mike Pompeo, Mnuchin said Trump is issuing an executive order authorizing sanctions against "any individual owning, operating, trading with or assisting sectors of the Iranian economy, including construction, manufacturing, textiles and mining."

In addition, Mnuchin outlined 17 specific sanctions against Iran's largest steel and iron manufacturers, along with three entities based in the Seychelles and a vessel involved in the transfer of products.

Other targets of the sanctions include the secretary of the Supreme National Security Council, the commander of the Basij militia of the Islamic Revolutionary Guards Corps, and other senior leaders close to Iran's supreme leader, Ayatollah Ali Khamenei.

The restrictions limit the targets' ability to interact with the U.S. financial system, do business with Americans, access dollars in some cases or travel to the United States.

Pompeo said Iranian officials have carried out Khamenei's "terrorist plots and destabilizing campaigns across the Middle East and around the world."

Pompeo said the goal of the sanctions "is to deny the regime the resources to conduct its destructive foreign policy," adding: "We want Iran to simply behave like a normal nation."

These are just the latest sanctions the Trump administration has placed on Iran in an effort to punish Tehran for promoting instability and terrorist activities in the Middle East and to deter it from future attacks.

Trump abrogated America's involvement with a multinational agreement concluded under President Barack Obama in which global economic pressure was relaxed in exchange for Iran's commitment not to enrich nuclear fuel for a weapon.

Iran held to the terms of that agreement, but Trump and Pompeo objected to what they viewed as its generosity and what they called its failure to constrain Iran's other malign activities and ballistic missile program. So Trump walked away and reapplied sanctions and other restrictions with the aim of applying "maximum pressure."

Iranian leaders have complained about what they called American duplicity and also mocked each new round of sanctions, arguing that past a certain point, such restrictions become meaningless.

Mnuchin insisted on Friday that the sanctions are having their intended effect.

"I think we have 100 percent confidence and we are consistent in our view that the economic sanctions are working," he said. Without the sanctions, "literally Iran would have tens of billions of dollars," which he said would be used to promote terrorist attacks throughout the region.

He suggested Iran must choose between underwriting groups such as Hezbollah or Hamas, "or do you allow your people to have the opportunity to live the life they want and grow your economy?"