Accessibility links
Iran Says It Shot Down Ukrainian Jetliner By Mistake After initial denials, Iranian officials now say "missiles fired due to human error" caused the crash of the Ukrainian plane Wednesday, killing all 176 people on board. 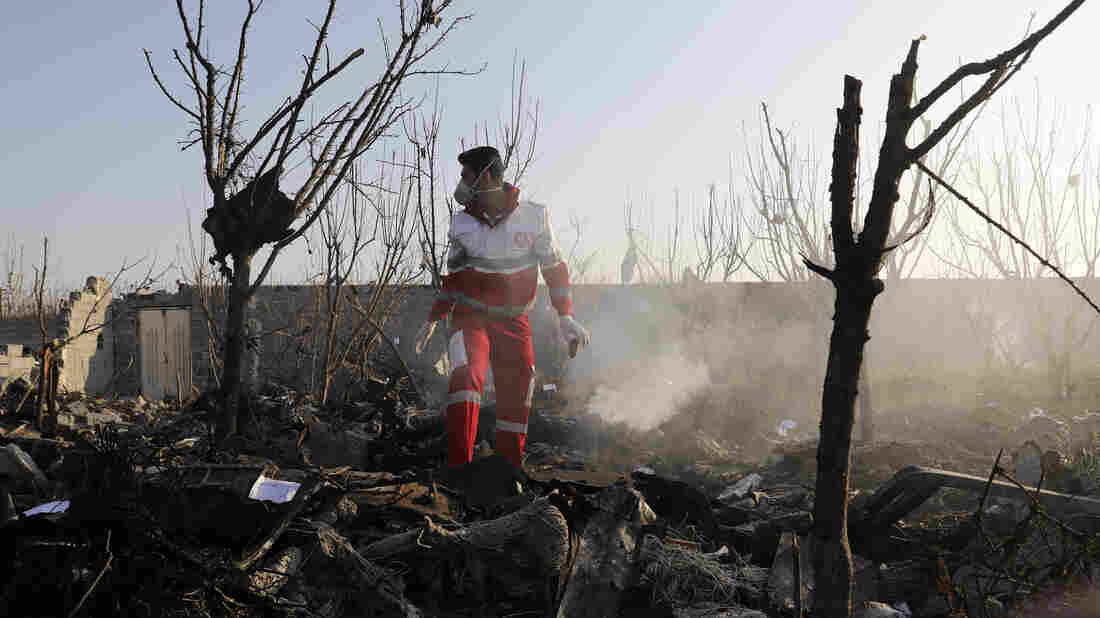 A rescue worker searches the scene where a Ukrainian plane crashed near Tehran on Wednesday, killing all on board. Iran says the plane was shot down in an "unforgivable mistake." Ebrahim Noroozi/AP hide caption 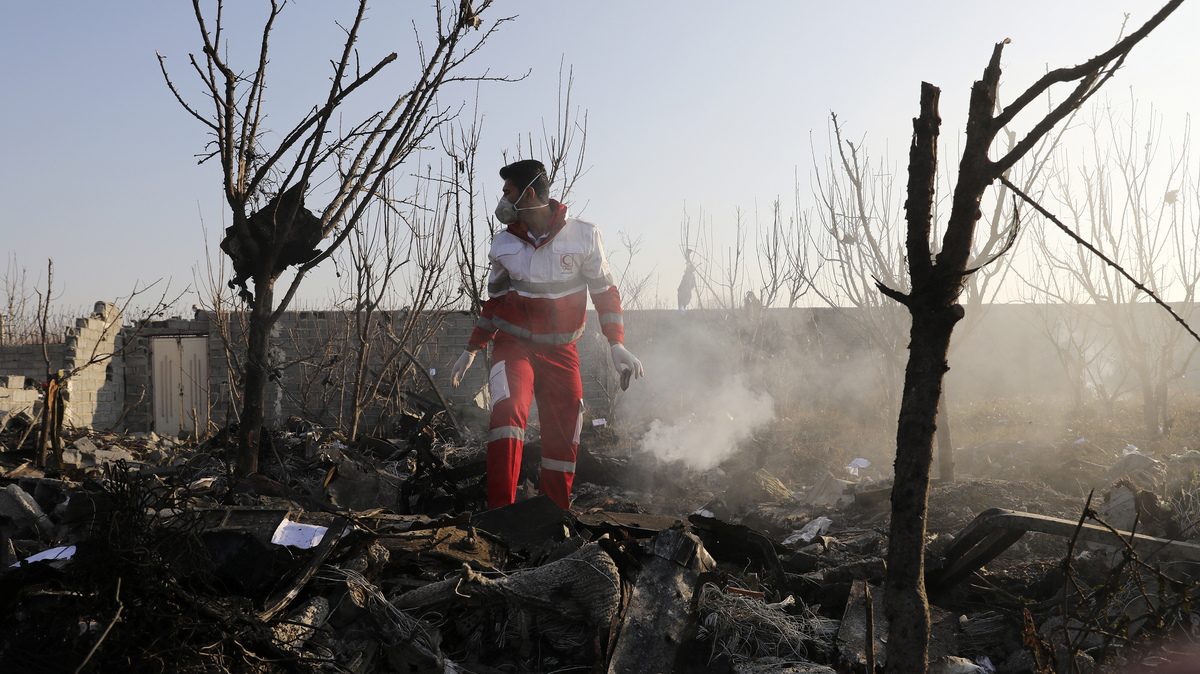 A rescue worker searches the scene where a Ukrainian plane crashed near Tehran on Wednesday, killing all on board. Iran says the plane was shot down in an "unforgivable mistake."

In a "terrible catastrophe," Iran says it mistakenly shot missiles at a Ukrainian civilian jetliner minutes after takeoff on Wednesday. The plane crashed on the outskirts of Tehran, killing 176 people.

It's a reversal from earlier statements by Iranian officials, who had repeatedly denied that their own missile system shot down the plane.

The country's military now says the plane was shot down because it was thought to be a hostile object that was approaching a sensitive location of the country's Islamic Revolutionary Guard Corps.

Iranian officials blamed heightened tensions with the U.S., with Rouhani saying the military was expecting attacks from the U.S. amid "the atmosphere of threats and intimidation by the aggressive American regime." Iran's foreign minister tweeted that it was a "sad day" but that U.S. "adventurism" had caused the disaster.

The area where the plane was shot down is near a missile research center and other Iranian military sites. They are "definitely sites that will be targeted in an all-out war," Fabian Hinz, a researcher with the Middlebury Institute of International Studies at Monterey, told NPR this week, saying Iran's air defenses were likely "on high alert" at the time.

Ukraine International Airlines Flight 752 was headed from Tehran to Kyiv Wednesday and was carrying 176 people, including 82 Iranians, 57 Canadians, 11 Ukrainians and others from Sweden, Afghanistan and the U.K. (Canadian officials had earlier said 63 Canadians were on board but revised that number Friday.)

Canadian Prime Minister Justin Trudeau, who had already pointed toward Iran's military as being behind the crash, released a statement after Iran's admission saying Canada's focus going forward would be "closure, accountability, transparency, and justice for the families and loved ones of the victims."

He said Canada would work with other countries to "ensure a complete and thorough investigation, and the Canadian government expects full cooperation from Iranian authorities."

Ukrainian President Volodymyr Zelenskiy said his country "insists on a full admission of guilt. We expect Iran to bring those responsible to justice, return the bodies, pay compensation and issue an official apology. The investigation must be full, open & continue without delays or obstacles."

Other governments, including the U.S. and U.K., had already said evidence pointed to an Iranian missile downing the plane, likely unintentionally.

Video evidence online appears to show a missile hitting the plane. And governments likely have other evidence, including satellites that can detect heat signatures of missile launches and possible intercepted Iranian military communications.

In the face of such evidence, Iran may have calculated that a quick reversal would be preferable to continued denials.

"There's nothing you can do to cover it up or hide it," Anthony Brickhouse, an air safety expert at Embry-Riddle Aeronautical University and a former National Transportation Safety Board investigator, told The Associated Press. "Evidence is evidence."

Investigators from Ukraine arrived in Iran Thursday, and Iran has invited representatives from the NTSB and Boeing, the plane's manufacturer, to participate in the probe.

Tensions between Iran and the U.S. are high after President Trump authorized the assassination of a top Iranian general, who was killed in a drone strike last week. Iran retaliated this week with ballistic missile strikes on Iraqi bases that were hosting U.S. forces, though U.S. officials say no Americans or Iraqis suffered casualties in the attacks.

Secretary of State Mike Pompeo and Treasury Secretary Steve Mnuchin announced new sanctions on Iranian government officials Friday in response to the missile attacks in Iraq. Pompeo said the U.S. would "let the investigation play out" before pursuing punitive measures against Iran over the plane's downing.