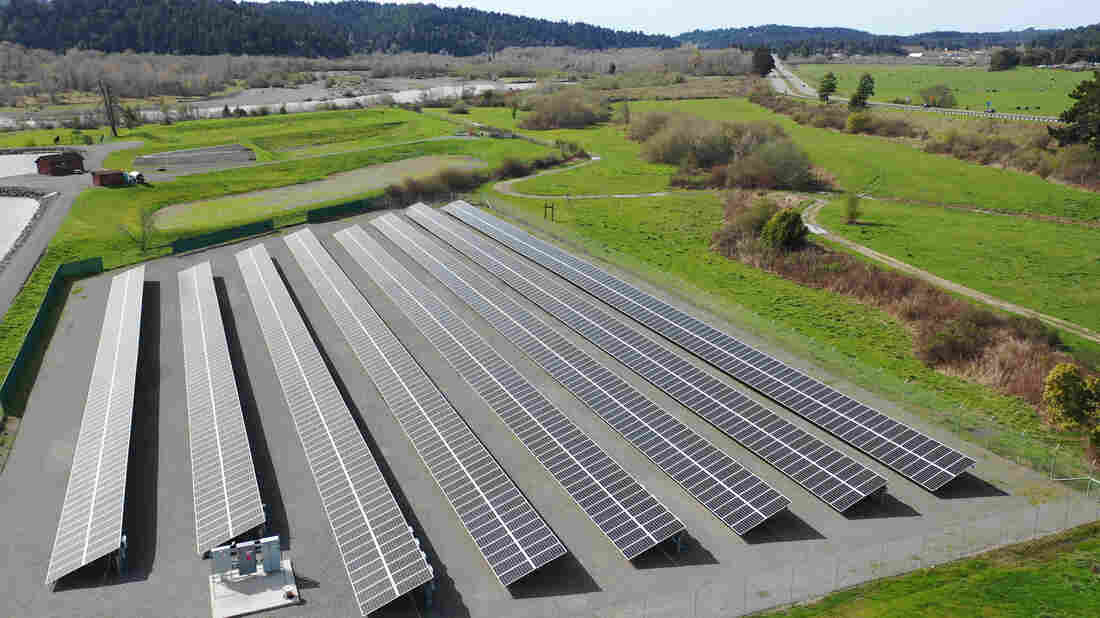 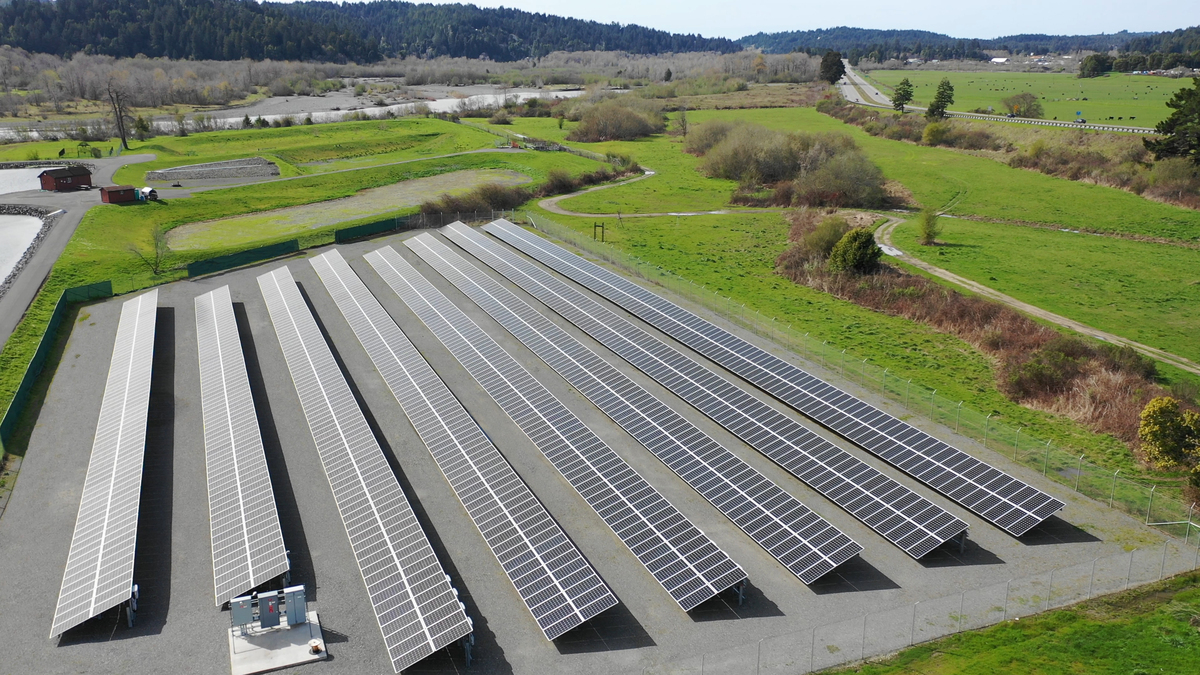 The Blue Lake Rancheria microgrid powers a number of buildings on the reservation and helped provide necessary energy during county-wide power outages.

Courtesy of the Blue Lake Rancheria

Now a renewable energy microgrid on a tiny California Native American reservation is proving to be one solution to this ongoing problem.

The Blue Lake Rancheria is located just north of Eureka, Calif. On the 100-acre campus, just behind the casino and hotel, Jana Ganion opens a chain-link fence.

"We're up on a little platform that can oversee most of the array," she says. "This is the view I like the best."

Inside, in an area half the size of a football field, are more than 1,500 solar panels, slanted toward the noonday sun.

Ganion is the sustainability director with the Blue Lake Rancheria, which includes about 50 members. She helped build this solar microgrid as part of the tribe's goal to develop climate-resilient infrastructure and to be ready for earthquakes and tsunamis.

But then beginning in October, it became useful in a whole new way.

The utility, Pacific Gas and Electric (PG&E), shut off power to more than 30 counties in Central and Northern California on Oct. 9.

"We had probably 30- to 45-minute gas lines," Ganion says. "People were fueling up vehicles, but also their home generators. That continued, basically, for the duration of the 28-hour outage."

As one of the only gas stations in the county with power, the reservation provided diesel to United Indian Health Services to refrigerate their medications and to the Mad River Fish Hatchery to keep their fish alive. The local newspaper used a hotel conference room to put out the next day's paper. Area residents stopped by to charge their cell phones.

Ganion estimates that on that day more than 10,000 nearby residents came to the reservation for gas and supplies.

Emergency plans 'thrown out the window'

County officials had been warned about the utility shutoffs, but they didn't know they were happening until that day, says Ryan Derby, emergency services manager for Humboldt County, where Blue Lake Rancheria is located.

"Our entire planning model for the last 18 months got thrown out the window," Derby says.

"Humboldt County prides itself on being resilient," Derby says, "But I think in light of these public safety power shutoffs we realized how dependent we really are on electricity."

The county focused on residents who relied on medical devices like respirators or oxygen tanks.

"We had eight people here who could not have lived without electricity," Huff says. "So, we saved eight lives."

The tribe built the microgrid with help from the Schatz Energy Research Center at Humboldt State University.

"Microgrids are very complex. In some ways they're kind of like snowflakes where no two of them are the same because it depends on where you are on the grid and what your facility is," says Dave Carter, the managing research engineer at the Schatz Energy Research Center and the lead technical engineer on the project.

Microgrids keep the electricity flowing to customers even after disconnecting from the overall power grid. During an outage the Blue Lake microgrid goes into "island mode" and a large Tesla battery system stores extra power and balances the energy supply and demand.

By comparison, Carter says, conventional solar arrays have to automatically shut down during outages for safety so they don't electrocute powerline maintenance workers or people who could come in contact with a downed line.

Microgrids do come at a price. The Blue Lake installation cost $6.3 million. Five million dollars came from a California Energy Commission grant, and the tribe helped raise the rest.

Carter's lab at the Schatz Energy Research Center is looking for ways to lower the cost of microgrids. In spite of the upfront price, he says, communities should consider what it's worth to stay in control during a natural disaster.

Pittsburgh's Microgrids Technology Could Lead The Way For Green Energy

"The extreme case would be for your medical device to stop working," Carter says. "The value of the power that the microgrid can provide when the rest of the county is de-energized is high."

The California utility shutoffs don't appear to be going away. Last month PG&E announced a request for proposals to build 20 new microgrids near utility substations that could be affected by future power shutoffs. They're hoping to have them running by next fall, the season with high winds and extreme fire risk.

"Many, many tribal nations are located at the end of the line in terms of the electricity grid," Ganion says. "They may have no power. They may have poor quality power. Microgrids are just a way to do an end-run around all of that."