Accessibility links
Review: 'Oligarchy,' By Scarlett Thomas Scarlett Thomas' novel, set among wealthy girls at a British boarding school, is an audacious examination of disordered eating and social competition that turns dark when one of the girls drowns. 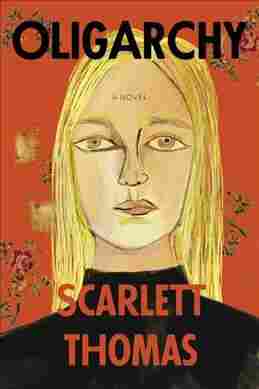 When 15-year-old Natasha first arrives at her new boarding school, she has no idea what to expect. The daughter of a nouveau-riche Russian oligarch, she's been sent to continue her education in England. It doesn't take her long to learn the rules: The girls at the school can only use the Internet for an hour a day. YouTube is strictly off limits. And, most crucially, they must remain thin or risk becoming a social pariah: "Your thighs should not touch each other anywhere, not even if you were born like that."

It's not uncommon for young women, having been raised in the never-ending era of unrealistic beauty standards and the male gaze, to be concerned with their weight. (Thomas herself has written about her struggles with disordered eating.) But the girls in Scarlett Thomas' novel Oligarchy take it to shocking extremes. Thomas' book touches on several themes other novelists might be reluctant to address — eating disorders, pedophilia, suicide. It's not surprising that it's an extremely dark book; it is surprising, however, that it's one of the funniest novels in recent years.

Natasha — Tash, as she's quickly rechristened at her posh, nickname-happy new school — hasn't had long to get used to her new life. She was snatched from her humble existence living in Russia with her mom when her long-estranged father, a mysterious figure whose newfound money seems to have come from shady means, took a renewed interest in her and shipped her to school in England.

Tash soon enters the orbit of one of the school's cliques, which is obsessed with either becoming or staying thin. The girls take turns subjecting themselves to diets that they've devised, and play games like "the Fat Ballerina Challenge, where you had to find images of professional dancers and zoom in on their arses or their stomachs or their chins and rank the most gross body parts in order."

Things eventually get out of hand, and one of the girls, Bianca, is found drowned in a lake. The school's administrators suspect that her eating disorder somehow drove her to suicide; the other girls suspect she might have "just walked anorexically past the lake and then slipped anorexically into it."

The school brings in a series of guest speakers to address the girls' growing eating disorder problem, each one more counterproductive than the last. First, there's a pair of tough-talking male counselors, as clueless as they are unsavory-looking ("Where do you even get two therapists who look so much like paedophiles?"). Then, the recovering anorexic YouTuber who inadvertently teaches the girls how to find pro-anorexia hashtags on Instagram. And finally the biology teacher who gives the girls calipers and urges them to use them to calculate one another's body mass index. ("Is this ethical? Not really. Is it a good idea? No one cares.")

And hovering over the school is the specter of Princess Augusta, whose images adorn the walls. According to school legend, the noblewoman drowned herself in the nearby lake after the death of her lover, a commoner whom she was forbidden to marry. The late Bianca, we learn, was obsessed with Princess Augusta. And with Ophelia. Which adds up.

It takes a special kind of audacity to write a comic novel about teenagers with eating disorders, but Thomas executes it brilliantly.

It takes a special kind of audacity to write a comic novel about teenagers with eating disorders, but Thomas executes it brilliantly. She doesn't use the girls as punchlines; it's the adults, clueless and casually cruel, who she sets in her sights. The scenes with the two middle-aged, sketchy counselors are particularly funny — trying to explain to the girls that anorexia can kill them in a variety of different ways, one says, "Have you ever seen a sex slave being fed to tiger? It's not ... pretty, I can tell you. Fat girls don't get fed to tigers, they —" (Sadly, he's unable to finish his thought.)

By contrast, Thomas describes the girls' bruised psyches with a real gentleness that never turns patronizing. Of a student who has lost a large amount of weight, Thomas writes, "Everyone is fascinated with her. They examine her body in excruciating detail, and she loves it. She really loves it." It's heartbreaking, as it is when Tash — herself "bordering on underweight" — regards herself in a mirror: "She is simply enormous. The largest woman in the castle, certainly, but perhaps even on the planet." These understated, deeply sad moments, contrasted with the novel's bizarre plot and gleefully dark humor, turn the book into something special, multi-faceted; it certainly feels like something that hasn't really been attempted before.

And it's Thomas' boldness, as well as her writing — every sentence seems painstakingly constructed — that make Oligarchy such a remarkable novel. It's brash, bizarre and original, an unflinching look at a group of young women who have become "hungry ghosts, flickering on the edge of this world."