Accessibility links
Ukrainian Plane Crash: Protests Erupt After Iran Admits 'Unforgivable Mistake' After many denials, Iran's admission that it accidentally downed a Ukrainian plane was cautiously embraced by world leaders as a "step forward." Back in Tehran, protesters' reaction was far angrier. 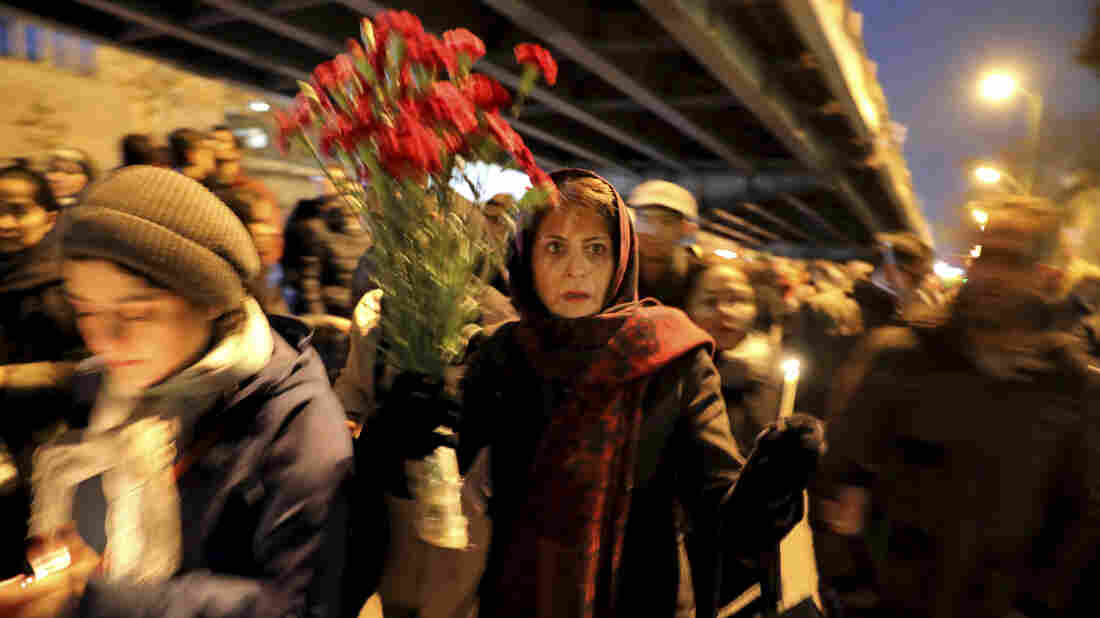 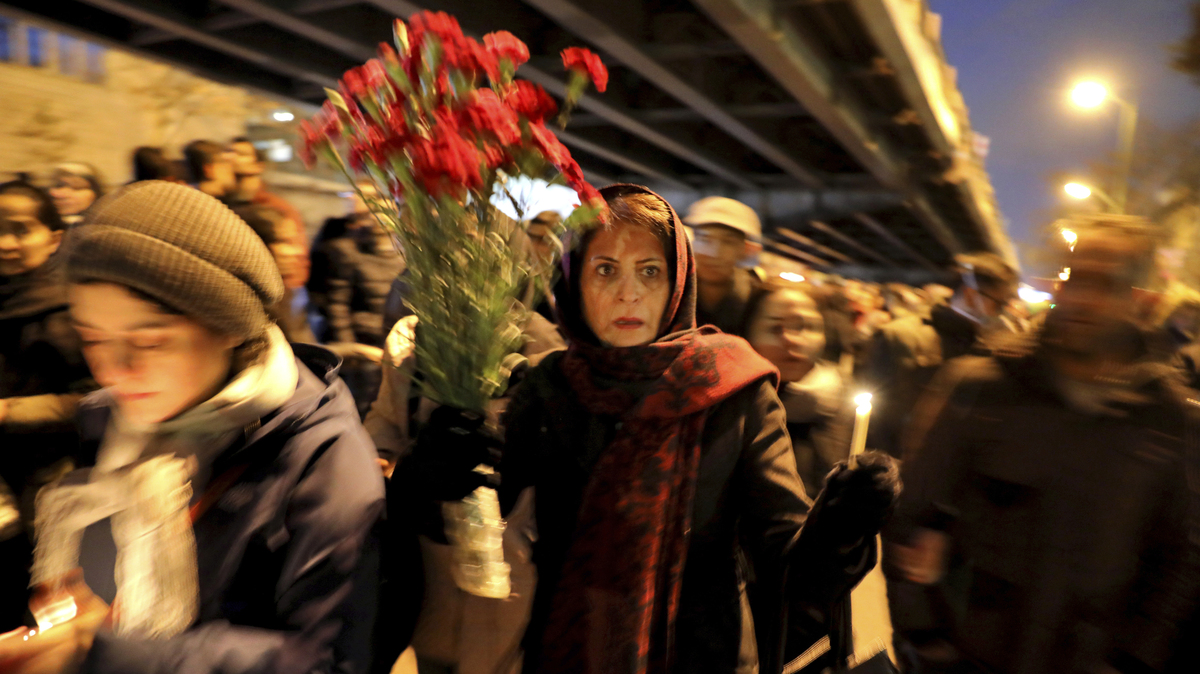 Mourners gathered for a candlelight vigil Saturday in Iran's capital, Tehran, to remember the victims of the Ukrainian plane crash.

Less than a day after Iran finally acknowledged that its armed forces unintentionally brought down a Ukrainian jetliner, Iranian authorities' admission of the "unforgivable mistake" has had major reverberations — both in Iran's capital, Tehran, where demonstrators crowded local universities Saturday, and around a stunned world.

"The fact that Iran has now taken responsibility for the downing of that aircraft means that it is likely that they will be full participants and fully allow a credible, independent international investigation with all partners involved," Canadian Prime Minister Justin Trudeau told a news conference Saturday.

"We still have work to do to ensure that happens," he added, "but the question of responsibility, I think, takes us a step forward towards truly having a very credible and thorough investigation."

The prime minister's comments came two days after he first revealed Canada's suspicion that an Iranian missile system shot down the plane near Tehran early Wednesday. Of the 176 people who were killed aboard the aircraft, 57 were Canadian nationals.

"I had a chance to sit with some of the families of the victims," Trudeau said Saturday. "They are hurt, angry and grieving. They want answers. They want justice. What Iran has admitted to is very serious. Shooting down a civilian aircraft is horrific. Iran must take full responsibility. Canada will not rest until we get the accountability, justice and closure that the families deserve." 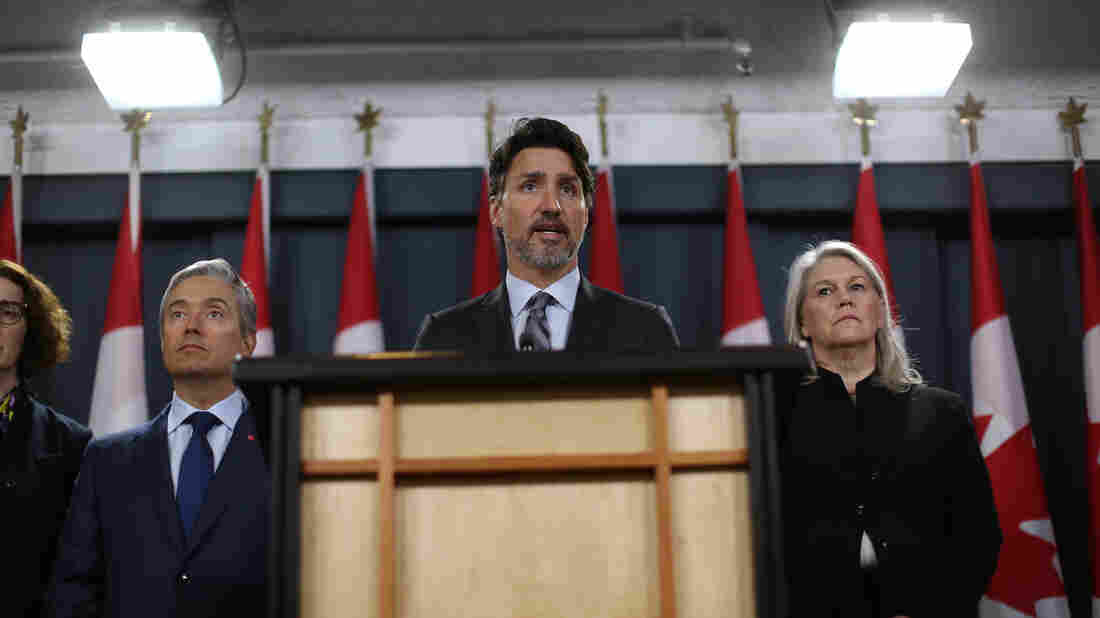 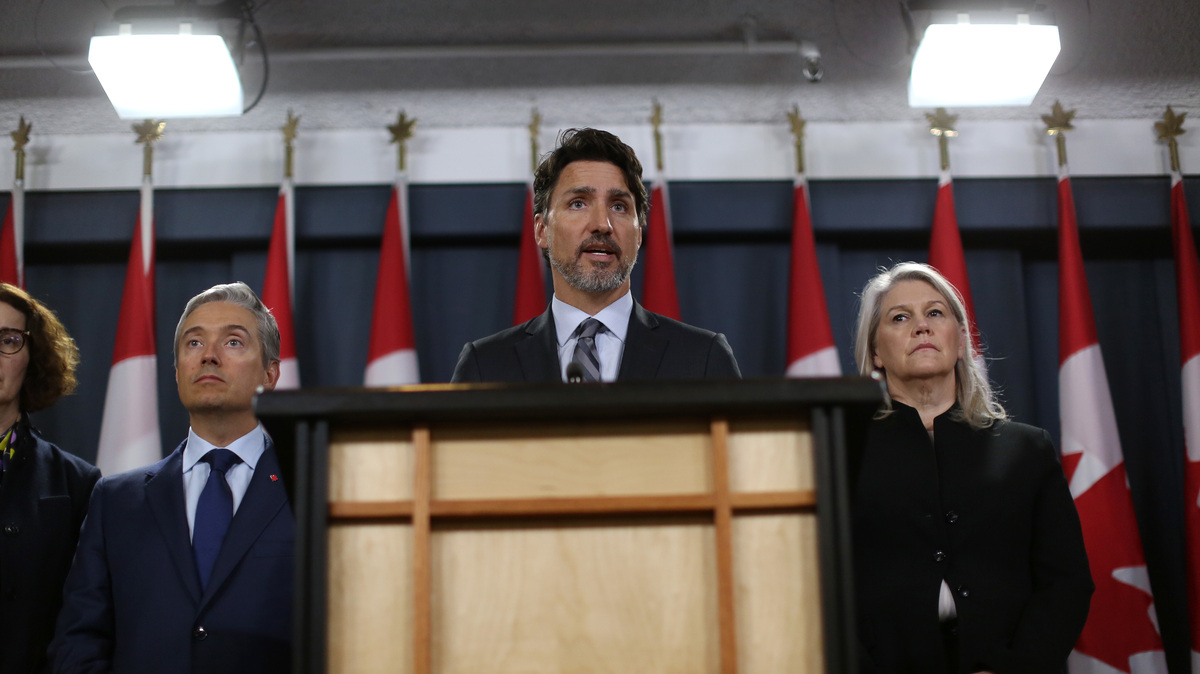 Canadian Prime Minister Justin Trudeau addresses a news conference Saturday in Ottawa, flanked by high-level ministers. Trudeau called the Iranian admission a "step forward," but noted there are lots of questions still to be answered.

Canadians were far from the only passengers who on board. Most of the passengers on Ukraine International Airlines Flight 752 were Iranian. Demonstrators there turned out in droves Saturday to mourn the victims and protest the actions of their own government, which spent days forcefully denying the missile strike before reversing course with its admission.

The Iranian government, already beleaguered with recent protests over a spike in fuel prices, enjoyed an upswell of popular support after a U.S. drone strike killed a prominent Iranian military commander in Baghdad last week. The killing of Maj. Gen. Qassem Soleimani, who enjoyed a towering reputation among Iranians, elicited massive rallies of mourners and expressions of support for Supreme Leader Ayatollah Ali Khamenei.

Earlier this week, Khamenei and the Iranian military retaliated for Soleimani's killing with a series of missile strikes on Iraqi bases hosting U.S. troops. The attacks, which resulted in no casualties at the bases, came within hours of the Ukrainian jetliner's crash.

Now, the downing of that plane threatens to unravel the broad domestic support Iran's government enjoyed just one week ago. Circulating on social media Saturday were videos of angry protesters, many of whom took aim at Khamenei with chants of "shameless" and "death to the dictator," according to Reuters.

Tehran: University students chanting “Soleimani is a murderer. His leader, Ali Khamenei is also a murderer.” Protest by thousands of Iranians in Tehran burst the propaganda balloon of the regime regarding Qassem Soleimani’s elimination. #Iran #IranPlaneCrash Via #MEK network. pic.twitter.com/n0hmasMSgj

Other images depicted security forces attempting to disperse the throng by firing canisters of tear gas and manhandling demonstrators.

Iran newspaper, the official daily publication of the government of Iran, also released a cover story listing the names of the victims and featuring, in bold white lettering, the word "Unforgivable."

Meanwhile, Ukrainian President Volodymyr Zelenskiy, who has been taking a close interest in the investigation into the causes of the crash, said he spoke over the phone Saturday with his Iranian counterpart, Hassan Rouhani.

Zelenskiy said Rouhani, who initiated the call, personally apologized for the tragedy, while the Ukrainian leader insisted on the speedy identification and return of the bodies of the 11 Ukrainians on board.

"Recognizing the 'missile version' as the cause of the disaster paved the way for its further investigation without any delay and obstruction," Zelenskiy said in a statement released Saturday. "I look forward to further constructive cooperation with Iran in accordance with international law."