Accessibility links
Tsai Ing-wen Wins Reelection In Taiwan More than 8 million voters cast their ballots for Tsai, who defeated a populist mayor running on a platform of closer ties to Beijing. 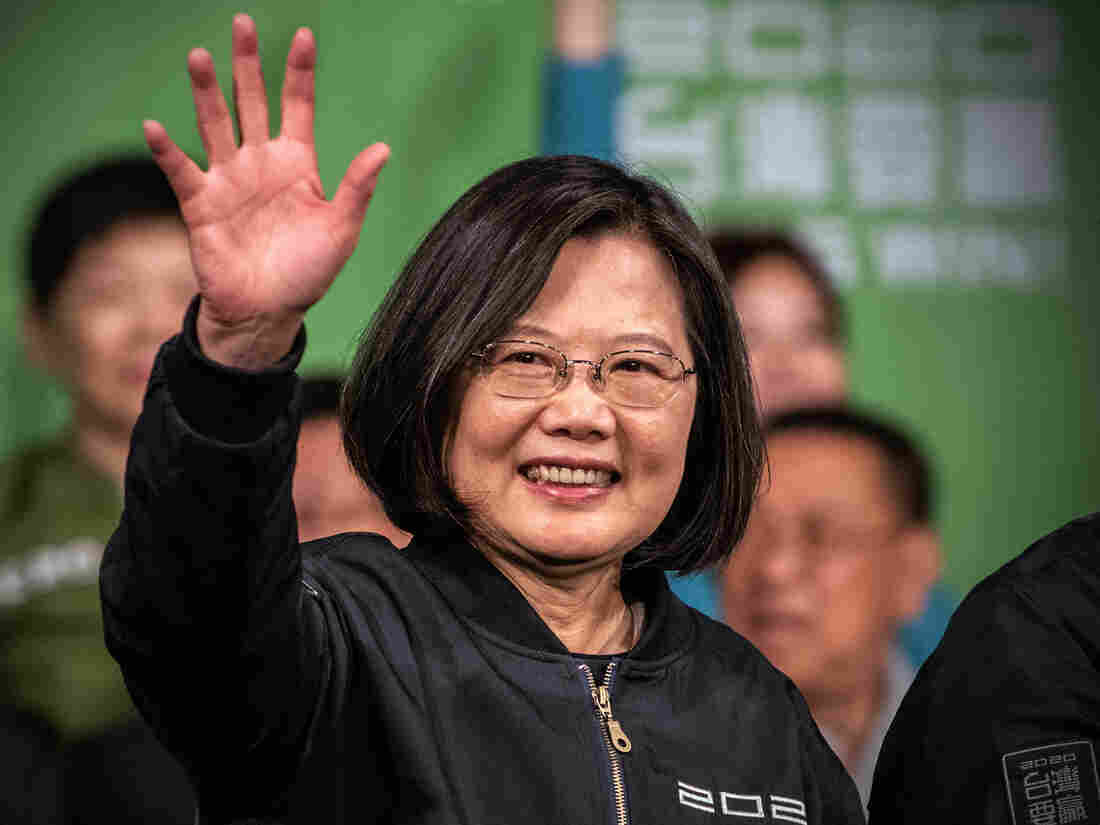 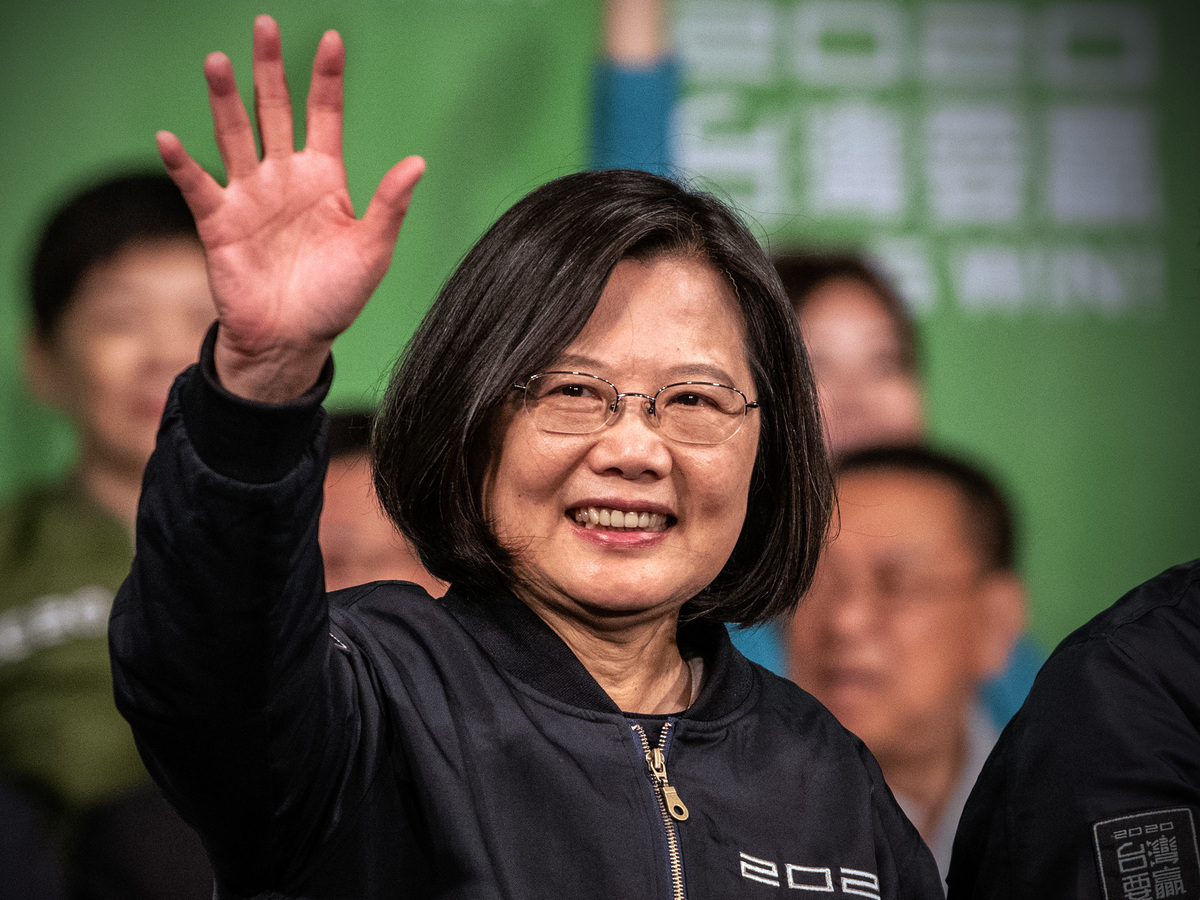 Tsai Ing-wen's victory is a sign that Beijing's efforts to co-opt Taiwan's political and commercial institutions instead mobilized a younger, more pro-independence electorate.

"Democratic Taiwan and our democratically elected government will not concede to threats and intimidation," Tsai declared to thousands of cheering supporters at an election rally outside her party's campaign headquarters Saturday night. "The results of this election have made that answer crystal clear."

A record 8.17 million voters cast their ballots for Tsai, according to Taiwan's election commission, the most ever for a presidential candidate since the island began holding direct presidential elections in 1996.

Tsai's vote total put her ahead of her opponent, the populist mayor Han Kuo-yu, by almost 20 percentage points in what has become one of the island's most closely watched presidential and legislative races in its short democratic history. Tsai's party, the Democratic Progressive Party, also maintained its majority in Taiwan's legislature, clearing a path for Tsai to push through a number of educational and health care reforms.

Tsai's margin of victory — she garnered more than 57% of the popular vote — marked a stunning turnaround. More than half a year ago, she lagged behind the Kuomintang party's Han in the polls. She staged a comeback in large part by taking an aggressive stance in support of Hong Kong residents protesting Beijing's rule.

"Young people in Hong Kong have used their lives and shed their blood and tears to show us that 'one country, two systems' is not feasible," Tsai said, referring to Beijing's system of governance in Hong Kong, at a rally the night before the vote. "Tomorrow, it is the turn of young people of Taiwan to show Hong Kong that the values of democracy and freedom overcomes all difficulties."

Han, by contrast, had welcomed closer economic ties with Beijing and promised repeatedly at political rallies to "make Taiwan safe," an implicit criticism that Tsai's policy toward China might provoke military action.

Han, who entered the race with deep pockets of support among Taiwan's rural communities, was hurt by a series of rhetorical gaffes and a perceived unwillingness to confront Beijing over protests in Hong Kong in the months before the election.

Tsai's victory is a sign that Beijing's efforts to co-opt Taiwan's political and commercial institutions through a mixture of sticks and carrots has had the opposite effect, mobilizing a younger, more pro-independence electorate to support Tsai.

"Demographics played in Tsai's favor. Young people identify with Taiwan and the democratic values that Tsai's platform promised to represent and protect to a greater degree than her competitor," said Jonathan Sullivan, China program director at the University of Nottingham and a Taiwan studies specialist. "These same demographics ought to worry Beijing, because they only point in one direction, and it's not unification."

China has vowed to "reunify" Taiwan ever since the retreating Kuomintang party set up a government-in-exile on the island in 1949, and it considers Taiwan a Chinese province. In the decades since, Beijing has sought to isolate Taiwan, whittling down Taipei's diplomatic allies. It has also refused to rule out military force against Taiwan for the sake of reunification.

But while China looms in the background of every Taiwanese election, this presidential race turned into an especially heated proxy vote on how Taiwan should engage with China, whose role in suppressing protests in nearby Hong Kong has cast a shadow over Taiwan's own future.

Beijing had sought to co-opt Taiwan's in the months leading up to Saturday's vote. In July, Beijing banned Chinese citizens from traveling to Taiwan on their own, decimating Taiwanese businesses dependent on mainland tourism. China has sailed its new aircraft carrier, the Shandong, weeks ahead of the presidential election and circled Taiwanese airspace with its fighter jets. Taiwanese authorities also suspect Chinese state-backed agents are behind a wave of political disinformation that have plagued both its 2016 legislative election and this year's presidential race.

On Saturday, Chinese state media published muted reports of Tsai's win, criticizing her for what they saw as her deliberate antagonizing of Beijing.

In her next four years in office, Sullivan said, Tsai will have to delicately balance growing calls for independence among her supporters with Beijing's more pugnacious approach to cross-Strait relations.

"She will face pressure [from her own party] on one side and Beijing on the other," said Sullivan. "I expect Beijing to continue to squeeze Taiwan internationally, go after more allies, invest in Taiwanese media, keep up its [political influence] activities and indulge in shows of military might and bellicose rhetoric."

Among those flying to Taipei specifically for the election: Hong Kong residents.

"We want to thank Taiwan for their support of Hong Kong," said Gary Chiu, a Hong Konger who took a flight to Taiwan ahead of the vote.

"This is only the country with a Chinese community that enjoy real democracy and real freedom," said Samantha Lu, another Hong Kong resident who was in Taipei for the vote. "Once you lose your freedom, it's not easy to get it back."