Accessibility links
Review: 'The New Pope' Keeps Vatican City Weird It's got a new title and a new lead actor, but everything else about writer/director Paolo Sorrentino's series — a soapy, deeply weird peek under the papal robes — remains intact.

Meet 'The New Pope,' Same As 'The Young Pope'

Meet 'The New Pope,' Same As 'The Young Pope' 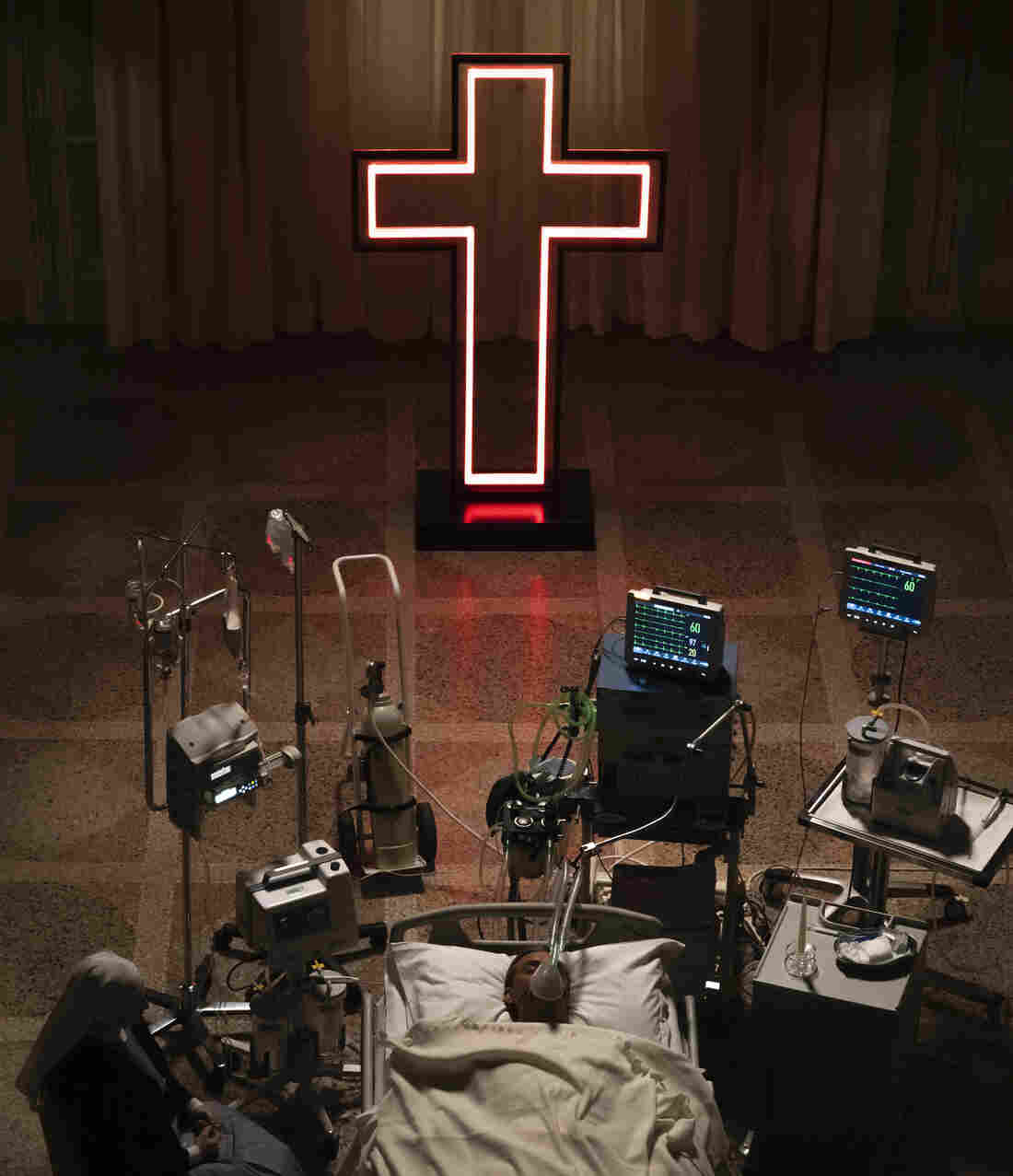 Coma Unto Me: Pope Pius XIII (Jude Law) lies between life and death in the world's most stylish hospital in HBO's The New Pope. Gianni Fiorito/HBO hide caption

There's an argument to be made that Catholicism is to Paolo Sorrentino's The Young/New Pope television series as Media is to Succession, as Oil was to Dallas and Dynasty, as Wine was to Falcon Crest, as McMansions are to the Real Housewives.

Which is to say: merely the setting, the ostensible backdrop before which the real drama plays out: endless, internecine struggles, betrayals, maneuvers, schemes and retribution.

It's not an argument writer/director Sorrentino is likely to agree with, given how often he has characters intone whispered observations and invective about the nature of God, and Man, and Faith and — mostly — the role of the Church in the world. It's clear he sees the show as truly engaging with these topics — and that he's counting on such exchanges to lend the drama some amount of theological weight.

In season one — called The Young Pope — Jude Law starred as the first American pope, Pius XIII. A fiery, charismatic, hard-line Catholic, Law's character ruffled the feathers of the Vatican's cardinals, who worried that the devotion he inspired in people was little more than fanaticism. Vatican City's Secretary of State, Cardinal Voiello (the excellent, bushy-browed Silvio Orlando) was used to holding power, and clashed frequently with the brash young pontiff; their relationship grew more nuanced as the season progressed, until they entered into a grudging mutual respect.

The peek the series offered under the papal robes was clearly a fanciful one, pitched to entertain on a secular, earthly level, not to illuminate any ineffable mysteries. And entertain it did — filled as it was with shifting allegiances, murder plots and thwarted romance. And Law was charmingly inscrutable in the title role, projecting a sense of calm confidence that spilled over into megalomania.

But back to the kangaroo.

The reason The New Pope became the minor sensation it did had little to do with its setting, really. Yes, Catholic groups objected to the series' depiction of the papacy as an institution riddled with venality and sin. But what really got people to talking about the show on social media and elsewhere was its deep, abiding, fully committed weirdness.

In the first season, for example, Pius XIII went for a walk through a Vatican garden at night, where he came upon ... a kangaroo. The two stared at one another for long seconds (Sorrentino loves long, still pauses), and the show moved on.

The creature's appearance was soon explained (a gift from the Australian government), but it was only one factor contributing to the show's determinedly odd tone. There was also the dialogue — clever, often quite funny exchanges delivered by the show's largely Italian cast members in thickly accented English. If the series had chosen to let its actors simply speak Italian with English subtitles, the result would likely have been unremarkable. As it is, however, their tendency to emphasize words English speakers wouldn't necessarily emphasize, and insert pauses where English speakers wouldn't, adds to the sense of watching the show from across a vague, uncanny yet palpable cultural divide — the ecclesiastical drama as Mentos commercial.

That singular tone remains in season two. In fact, everything that made the show so distinct persists, despite the title change and the swapping out of Jude Law's Pius XIII for John Malkovich's Sir John Brannox. Sorrentino's camera still tracks slowly, languidly through immense arched hallways, vaulted rooms and lush gardens, pausing to alight upon small, telling details.

He still positions his actors with exacting precision, framing his shots with a kind of symmetry that borders, very intentionally, on the divine. A throwaway conversation between cardinals takes place in a gorgeous copse of trees; an important exchange between two characters unfolds in front of a Renaissance painting that silently comments on their dialogue.

Also intact: the show's predilection for outstanding, trippy titles sequences that exude a Felliniesque blend of the sexy and absurd. (This season's first few episodes, for example, depict a brace of cloistered nuns writhing in their underwear in front of a strobe-light cross as Sofi Tukker's "Good Time Girl" thuds away. Later episodes feature a male character striding down a beach boardwalk in a white speedo to the opening licks of "All Along the Watchtower.")

As for the plot: At the end of last season, Law's Pius XIII collapsed; we open with him lying in a persistent coma, throwing the Vatican into disarray as they search for a replacement. It's no spoiler to note that they — eventually — arrive at John Malkovich's Sir John Brannox of the UK.

Malkovich seems to have more fun in his pre-papal scenes, reveling in his portrayal of Brannox as a louche, mascara-wearing British fop who flounces through life, and who is given to reclining on the nearest chaise as if he has just been roughly flung there. Once he assumes the papacy, the role seems to swallow him up in a way it never did Law; perhaps this is due to the nature of his character, who proves more uncertain and fragile than Pius XIII. (If you miss Law's performance, don't worry. There's a reason his name is still in the credits.)

The show remains as strangely secular as ever, despite its ostensible subject. God gets frequently invoked, but Jesus' name gets dropped only a handful of times, and Mary's almost never. This season also sees the show continuing its attempting to engage, albeit in questionable taste, with real-world issues: sexual abuse, the migrant crisis, homosexuality, and — in a new subplot threaded through the season — the threat of terrorism.

Mostly, though, The New Pope, like The Young Pope before it, is all about jockeying for a very earthly kind of power. Silvio Orlando gets more to do, playing another character in addition to Voiello. No, it doesn't make much sense, but this is The New Pope, after all, and anyway it gives Orlando more screen time, so who's complaining? Unlike season one, whose story seemed to lurch along as if truggling to find its way, season two's narrative unspools steadily — if slowly, at times — and arrives upon a conclusion that feels resolute and satisfying.