Accessibility links
Review: 'The Plain Janes,' By Cecil Castellucci And Jim Rugg Cecil Castellucci and Jim Rugg's beloved young adult comic returns with a collection of old and new stories — and this time, our art-loving heroines are a little more grown up. 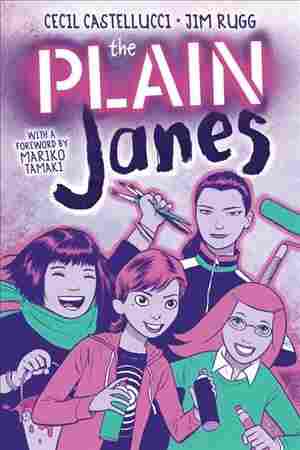 by Cecil Castellucci and Jim Rugg

The Janes are back — and guess what? They've grown up. Cecil Castellucci and Jim Rugg's young adult comic about four teenagers-turned-guerilla-artists charmed critics when it debuted in 2007. It's the kind of book you can't wait to give to the teen in your life, but not before spending a couple of hours reading it yourself. Its theme is earnest, peppy and — in these trying times — something many of us struggle to keep in mind: That art has the power to transform and invigorate us, both within and in our relationships with one another.

Castellucci's paean to the power of art was actually a bit too sunny in Janes circa 2007. Leaning heavily on the expectations of the YA genre, Castellucci wrote as if art was an uncomplicated force for good, and anyone who doubted its value simply needed to be educated. She ignored such issues as who should pay for art, how to judge good vs. bad art and whether art needs to be challenging in order to make a difference. But now, in a new story accompanying the original Janes tales in this hardback, the author ages up her message. The reborn Plain Janes is still somewhat simplistic on the role of art in society, but Castellucci engages with more complicated and subtle questions now. In 12 years, The Plain Janes has matured.

The Plain Janes Are Back

The Plain Janes Are Back

A 'Girl On Film' Grows Up And Finds Her Artistic Path

The "Janes" of the book are four girls, all coincidentally sharing a name, living in the suburbs. At the opening of the story the protagonist — or "Main Jane" — arrives from the city. Her parents have decided on the move because of a bizarre and terrifying incident a few months earlier: A bomb went off outside a café, injuring Jane. We never learn what motivated the bomber, but the incident's randomness makes it all the scarier. It prompts Jane to remake herself. "First thing I did was cut off all my hair and dye ... it black in my parents' salon, when they were asleep and couldn't say no," she says. "When I looked in the mirror, I saw the new me staring back. A girl who could handle anything."

Jane's determined to shake things up. She rebuffs the popular girls and applies herself to forging friendships with three intriguing misfits. One is into theater, one is an athlete and one is brainy, but their subpar social skills have thus far kept them alienated — from other students and one another. They're cold to Jane at first, but she eventually manages to persuade them to help her pull off clandestine "art attacks" around town. The Janes transform the site of a proposed strip mall with earth art, decorate a prominent tree with bottles containing uplifting messages and gift-wrap mailboxes and fire hydrants.

The community is gobsmacked. The local paper runs panicked headlines, the high school shuts down all school clubs and the police impose a curfew. Even Jane's parents see the incidents as a sign that the world is dangerously out of control. Eventually all the teenagers in town are drawn into a fight for self-expression.

'The Plain Janes' is one of those great teen books that transcends its category.

The early Jane stories are fun and optimistic, but a bit too sweet. The teens' cause is so unambiguously worthy, their opponents so obviously misguided, that there's not much tension — at least, for an adult reader. But in the newest story Castellucci goes deeper. When the town lets the Janes build an art park, they must consider whether art that's sanctioned and limited by the government can still be subversive. Armed with a nonprofit grant ("like a real artist!") Main Jane wrestles with administrative and logistical details. And a new girl — the brusque, multiply pierced Payne — pushes Main Jane to face the fears that subtly curtail her vision.

Castellucci's not the only one stretching her wings in the new story. Rugg is, too. He plays more freely with character styles, drawing one new character with deliberate flatness — she looks kind of like an emoji — and tweaking an existing design to cheekily reference Charles Burns. Rugg also has fun with elaborate two-page spreads and brings in different styles to reflect the characters' conflicting aesthetics. He generally strikes a solid, reassuring balance between evocative realism and relatable abstraction, but his experiments in the last story add a hint of insurgency.

The Plain Janes is one of those great teen books that transcends its category. It's always offered respite and inspiration for anyone, of any age, who struggles to keep their creative potential alive. But now that the Janes have grown up a bit, there's more than respite here: there's reflection.