Accessibility links
'Imperfect Union': What An 1850s Political Power Couple Can Teach Us About Voting In 2020 NPR's Steve Inskeep, discussing his book Imperfect Union: How Jessie and John Fremont Mapped the West, Invented Celebrity and Helped Cause the Civil War, touches on parallels to U.S. politics in 2020. 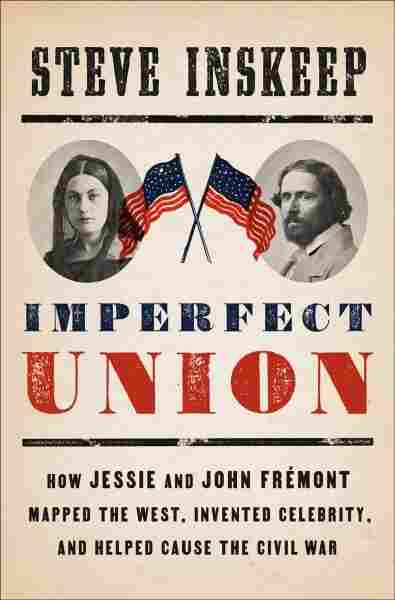 How Jessie and John Frémont Mapped the West, Invented Celebrity, and Helped Cause the Civil War

With an election year upon us, we are reminded that we have been through this before.

The United States in the mid-1840s, for example, was a country in the middle of a major transformation, pushing its boundaries to extend from coast to coast to claim what many in that era asserted was America's Manifest Destiny.

A new book by NPR's Morning Edition host Steve Inskeep tells us this story through the tale of a political power couple who personified the ambition of that era. His book, Imperfect Union: How Jessie and John Fremont Mapped the West, Invented Celebrity and Helped Cause the Civil War, finds some similarities with today's political situation in the United States.

I first heard about them when I was a kid because I would read these Time-Life books about the Old West. And they show up as characters because they're super famous and involved in the exploration of the West, involved in the Civil War and things like that. But they're never deeply explored — or almost never. And then I would have heard about Fremont, California. I began noticing [there's] Fremont Street in Las Vegas, the Fremont neighborhood in Seattle, Fremont, Nebraska, where Sen. Ben Sasse is from. We could go on and on. So their name is around, but the story is not often fully told. And when I began researching Manifest Destiny, the westward expansion, I became more and more interested in them as a couple. This super famous guy. And as I gradually learned, his wife, who was in some ways the brains of the operation.

On whether John Fremont's celebrity was based on accomplishment

Yes, it was based on actual accomplishment. But it was also promoting that accomplishment, which is what makes this such a modern story. He would go to Saint Louis, which was the western most city in the United States then, and he would, as a U.S. military officer, gather some skilled civilians and go out into the wilderness. And he would be mapping the Oregon Trail or other areas, what is now Kansas, Colorado, places like that. But he wasn't, as an explorer, necessarily discovering all that much. I mean, Native Americans have been all over the place. Other white people, Americans had been all over the place.

But this guy was supposed to come back with good maps and come back with dramatic tales of his adventures and promote the West to entice Americans to settle it. It was a PR game as much as it was exploration, although he was out there risking his life and nearly dying more than once in order to get across that landscape.

On the role of Jessie Benton Fremont

She was a really formidable character in a time when, of course, women's roles were far more limited, were far more constrained by society. But she had grown up wanting to do things that boys did. Her father initially encouraged this, he seemed to have wanted a son. He was disappointed to find it was a daughter.

He named her after his father, but then took her hunting with him and took her with him when he went to work in the Senate or to visit the president of the United States. And she wanted that life for herself.

There was a point at which he said, OK, now actually you have to become a woman, when she was a teenager. He became less and less comfortable with her explorations, but she managed to marry a man [and] became, in effect, his assistant and his aide in promoting westward expansion. And as John Charles Fremont was writing these popular accounts of his adventures, she would be his secretary or his editor, occasionally his ghostwriter, his political representative when he was away from Washington. [She was] his publicist, who would take his letters to newspaper editors — and someone who helped in really profound ways over the years to shape his image, both by bringing out his positive qualities and hiding things that were considered more embarrassing.

On how they helped cause the Civil War

Up until that moment, major political parties had always needed, because of the electoral math, to appeal for southern votes, which meant appealing for votes in slave states. And so they had to accommodate slavery — couldn't go against it very much at all. The Republican Party came about as the North's population grew so much that they realized, Northerners realized, they might win the presidency with Northern votes alone.

They were trying this audacious way to take advantage of the demographic change in America, to make what was seen then as a very progressive change to meaningfully oppose the extension of slavery. This was something the South found very threatening. They threatened to blow up the Union, in effect, if the Republicans ever won power — and the Fremonts were there at the beginning of that.

I don't want to suggest that history is repeating itself perfectly. We would never want to do that. But I think we can learn from it. And the 1840s and 50s were like today in that they were times of great demographic change. And those Democrats and those demographic changes meant changes in political power. In the 1850s, the North was becoming so much more populous than the South that these two sections of the country that had been somewhat balanced were becoming less and less so.

And Southern leaders, white Southern leaders, became more and more threatened about the future of slavery in which they believed — and had invested all of their money and all of their power. And that demographic change was intolerable to them and led them to threaten the Civil War and, ultimately, to cause it — and fire the first shot at Fort Sumter.

We're going through a period of demographic change today. Not exactly the same, but we have groups of people, people of color, immigrants. We could go through the list who are associated with one political party, much more so than the other. And because they're growing in numbers more rapidly, you have Democrats who are confident that demographics will bring them to victory and progressives who are confident that they don't need to compromise the same way with conservatives. And you have conservatives who are concerned about this demographic change and see it as an unfair way to permanently shut them out of power.

That is a similarity between then and now — that you have people who don't merely fear losing an election, but fear permanently being in the minority, permanently being defeated. And that is something that Americans of whatever political stripe have difficulty tolerating.