Accessibility links
U.S. Officials: More than 20 Saudi Students To Be Expelled In Wake Of Shooting Following the December attack on a naval air station, the Pentagon has suspended training of all Saudi military students, as investigators conduct a review of the more than 800 students in the U.S. 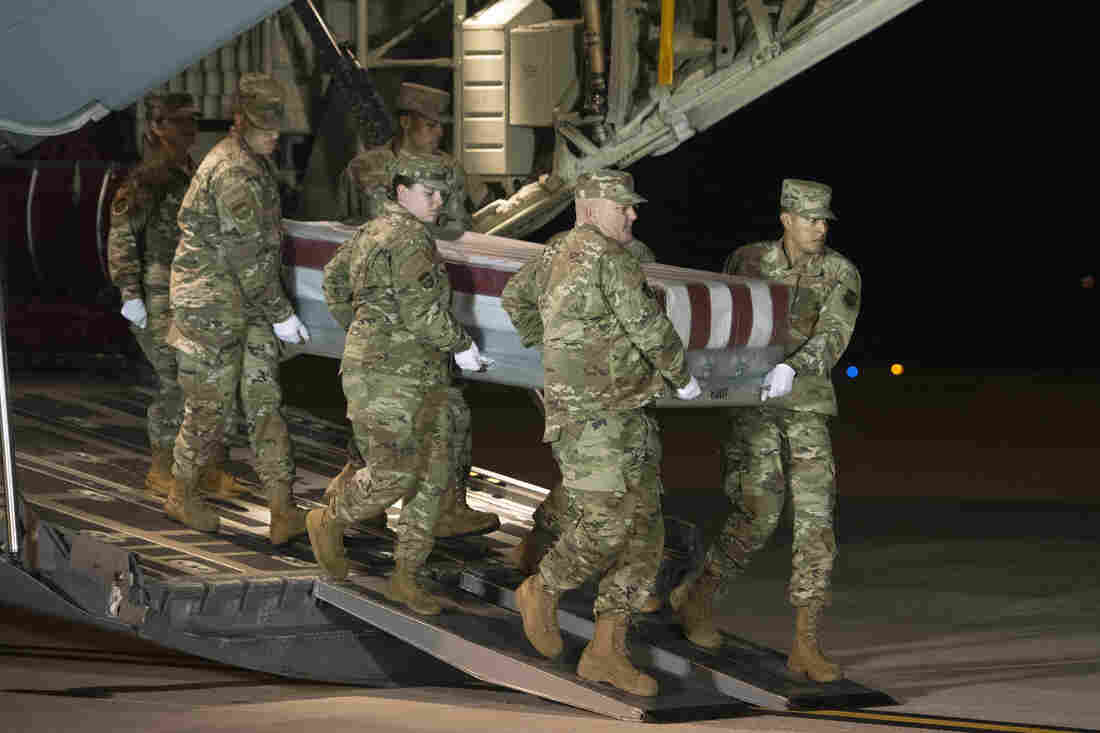 An Air Force team moves a transfer case containing the remains of one of the young sailors killed after a Saudi military student opened fire at Naval Air Station Pensacola last month. Officials are expected to soon announce that about 20 Saudi military students will be expelled from the U.S. Cliff Owen/AP hide caption 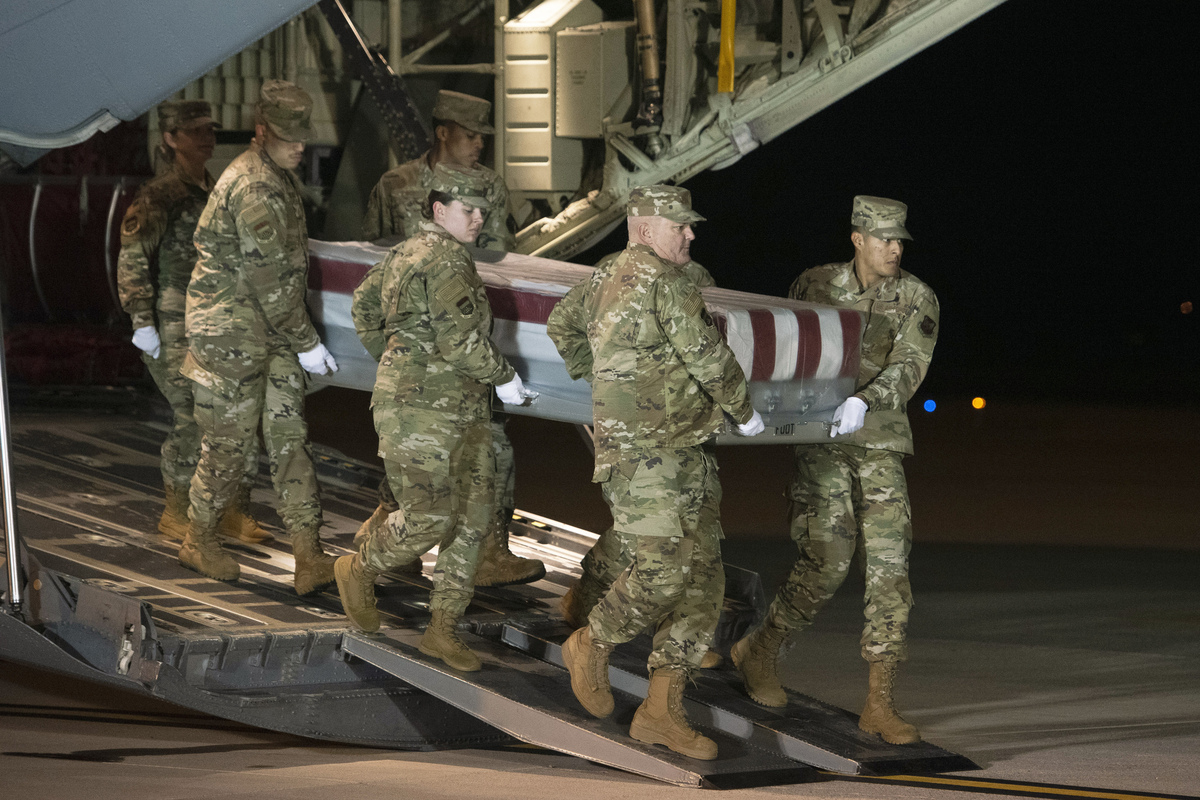 An Air Force team moves a transfer case containing the remains of one of the young sailors killed after a Saudi military student opened fire at Naval Air Station Pensacola last month. Officials are expected to soon announce that about 20 Saudi military students will be expelled from the U.S.

The Trump administration is planning to announce on Monday that more than 20 Saudi students receiving military training in the United States will be sent back to their home country, according to two U.S. officials familiar with the matter.

The expulsions come in the wake of a Pentagon review of the Saudi officer who opened fire last month at a naval base in Pensacola, Fla., leaving three young sailors dead and wounding eight others.

Earlier reports indicated that about 12 Saudi trainees would be kicked out of the country. However, those reports did not include Saudis who will be expelled from military bases other than Naval Air Station Pensacola, according to the U.S. officials who spoke to NPR on the condition of anonymity.

The Saudis who will be removed from the country raised a number of concerns among federal investigators, the officials said.

Some Saudi trainees failed to alert authorities about the shooter's extremist leanings. Investigators believe the gunman and other Saudi trainees watched videos of other mass shootings at a party before the attack.

The Justice Department, which has been investigating the incident as an act of terrorism, is planning on Monday to publicly announce the Saudi removals and the results of its criminal investigation into the Pensacola shooting.

In Saudi Arabia, news of the expulsions is expected to be greeted as unwelcome news, according to Daniel Byman, a Middle East expert and professor at Georgetown University's School of Foreign Service.

"They don't like public embarrassment. So having have these individuals be expelled, having it make the news, is not something the Saudi regime wants," Byman said.

The expelling of the Saudi students arrives amid heightened tensions in the region following the American drone strike that killed Iranian military leader Qassem Soleimani.

Byman said pushing out the students could make a precarious situation with Iran even more uncertain.

"If there's going to be efforts to do diplomacy with Iran, no matter which direction the United States wants to go in, Saudi Arabia is going to be important for that," according to Byman.

Authorities identified the victims of the December attack in Pensacola as Joshua Kaleb Watson, 23, of Enterprise, Ala.; Mohammed Sameh Haitham, 19, of St. Petersburg, Fla.; and Cameron Scott Walters, 21, of Richmond Hill, Ga.

Some members of Congress used the incident to renew attention on foreign military exchange training programs, which bring thousands of students from dozens of countries to be taught at U.S. bases.

Top military officials view the programs as a way to boost relationships with foreign militaries and to increase the sharing of intelligence around the globe as a national security measure.

When asked on Fox News Sunday about the move to kick out Saudi trainees, National Security Adviser Robert O'Brien said U.S. officials, including Defense Secretary Mark Esper, are exhibiting caution in the aftermath of the bloody rampage.

"I think we're being very careful. Obviously, Pensacola showed that there had been errors in the way that we vetted, and out of an abundance of caution Secretary Esper has taken these actions to protect our service men and women," O'Brien said.

The Saudis set to be expelled from the U.S. are not accused of aiding the 21-year-old Saudi gunman who carried out the attack, according to CNN, which first reported Saturday night that more than a dozen Saudi servicemen would be removed from the country.

Federal investigators believe the Saudi gunman, who legally purchased a handgun before the shooting, acted alone and was not part of a larger network. A sheriff's deputy shot and killed him.

Shortly after the shooting, an account linked to the gunman surfaced showing vitriolic posts on social media criticizing American foreign policy and military action, saying the country had become "a nation of evil."

The Department of Justice, Department of Defense and the Federal Bureau of Investigation all declined to comment on the pending announcement about the Saudi students being expelled.