Accessibility links
'Between Two Fires' Asks: At What Point Are We Responsible For Our Actions? In his new book, The New Yorker's Joshua Yaffa is as much an ethicist as he is a reporter, presenting a portrait of the Russian state through those who have decided to compromise with it.

'Between Two Fires' Asks: At What Point Are We Responsible For Our Actions?

'Between Two Fires' Asks: At What Point Are We Responsible For Our Actions? 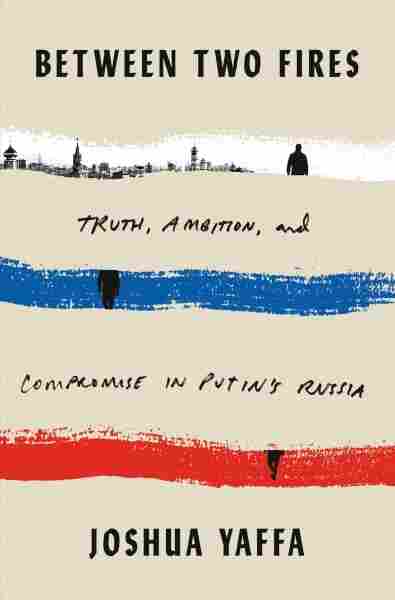 "The Russian language has an especially rich word for a person skilled in the act of compromise and adaptation, who intuitively understands what is expected of him and adjusts his beliefs and conduct accordingly: prisposoblenets," writes Joshua Yaffa in his new book, Between Two Fires, a portrait of the Russian state through those who have decided to compromise with it.

"I became convinced that the most edifying, and important, character for journalistic study in Russia is not [Russian President Vladimir] Putin," Yaffa writes, "but those people whose habits, inclinations, and internal moral calculations elevated Putin to his Kremlin throne and who now perform the small, daily work that, in aggregate, keeps him there."

Yaffa, a Moscow correspondent for The New Yorker, profiles eight Russians with varied relationships to the state, from a TV producer with art house taste and a Kremlin-dictated message to a Chechen human rights activist who decided she could do more good by cooperating with Putin than by fighting him. There is also a Crimean zookeeper who snuggles his lions and vexes the local authorities, a dissident priest, and a theatre director under house arrest.

Everyone who lives in Russia with any degree of prominence, Yaffa argues, must weigh the competing interests of personal benefit, societal good, and the dictates of an authoritarian regime.

The Chechen activist Heda Saratova, for instance, works with the government to bring home women and children who accompanied ISIS recruits to Syria. When a planeload of Chechnens return home, she waits on the tarmac, performatively holding a sign for the TV cameras: "We thank Putin for our children."

"When I see his picture or hear him speak, I remember that he destroyed thousands of our people's lives," Saratova told Yaffa. But "I imagine if I didn't do this, there wouldn't be a next round of children coming home."

Yaffa is as much an ethicist as he is a reporter, and the implicit question behind this book is: At what point we are responsible for our actions? What degree of pressure, or coercion, makes our choices no longer ours? If we must compromise, what compromises are worth it for a greater good? The people Yaffa describes exist in strange moral tidal zones, both subject to influences and capable, to some extent, of resisting them.

Yaffa implicitly defends those who compromise their morals for a cause, but has little sympathy for those who compromise their morals for personal benefit. In the book there is only one person, the Orthodox priest, who is portrayed as purely uncompromising, and his end is predictably bad. Most people, Yaffa writes, "are neither [Joseph] Stalin nor [Aleksandr] Solzhenitsyn, but, in their own way, wily."

Here, Yaffa is drawing on the research of Yuri Levada, a sociologist who wrote about the Soviet "wily man," someone who adapts to and extracts as much profit from the state as he can. After 1991, Levada expected to see the end of the wily man, but he found that those traits outlived the Soviet Union.

Of course, moral compromise is not unique to Russia but is a function of living in any society with pressures, whether religious, professional, social, economic, or governmental. The closest force I can think of in American life would be poverty, in the way it can permeate every part of someone's life, tip moral calculations, and perhaps even require of someone an ethical flexibility to survive.

The difference, Yaffa suggests, is that for Russians the state rises above all other institutions and pervades society in a way hard to imagine in the United States, or any non-authoritarian country. "One could not live in ignorance or indifference to the urges and caprices of the state; in fact, it was to your advantage to guess what it wanted from you, and to deliver that while also being clever enough to extract some benefit for yourself," he writes.

"It is the singular role of the state," Yaffa adds, "that gives this dynamic, otherwise perfectly relatable and universal, its particular Russian tinge."

Saratova at one point quotes a Russian movie about gangsters led by their circumstances into a life of crime: "It's not us who are broken, it's our life." Ultimately, Between Two Fires is a good book about Russia, but a great book about ethics, choice, and coercion — and to read it is to be reminded that one of democracy's most important freedoms is the freedom to be good.