Accessibility links
Opinion: In Iran Crisis, Iraq And Afghanistan Risk Becoming Collateral Damage As this high-stakes situation plays out, the danger is that Iran's fragile neighbors, Iraq and Afghanistan, will become collateral damage, writes the head of the United States Institute of Peace. 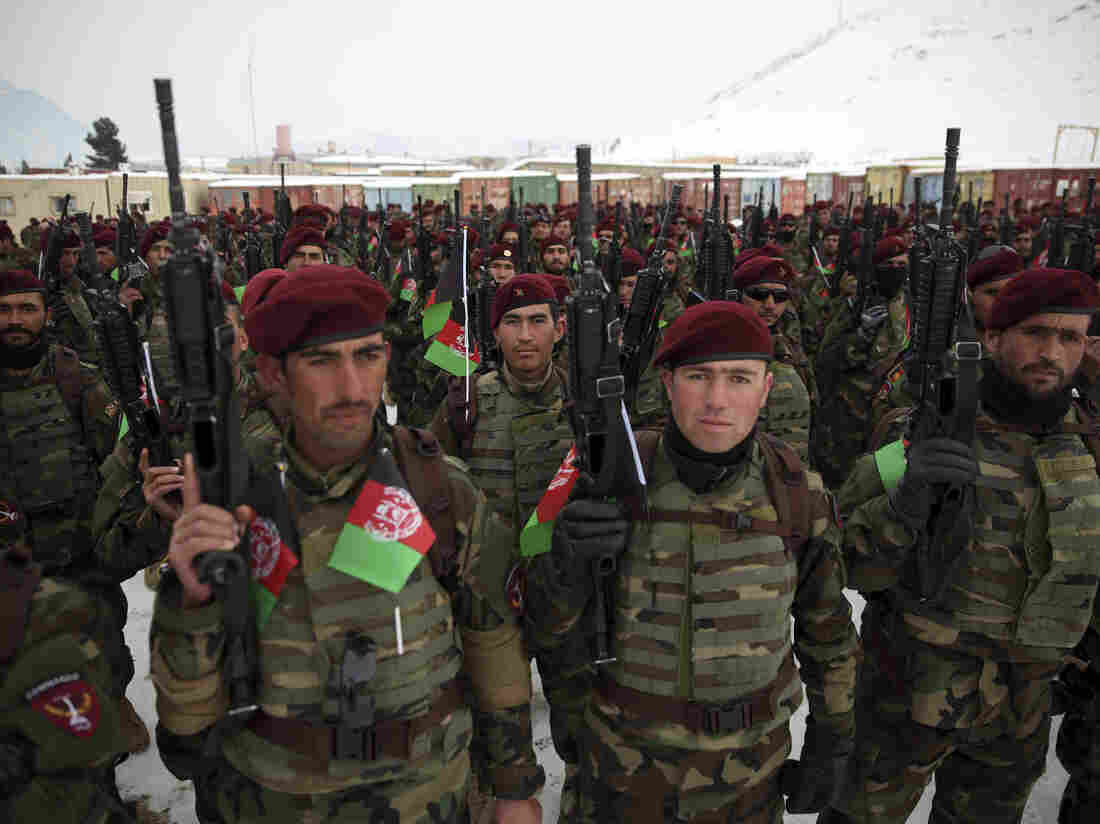 Afghan Army commandos attend their graduation ceremony after a 3 1/2-month training program, at the Commando Training Center on the outskirts of Kabul, Afghanistan, on Monday. Rahmat Gul/AP hide caption 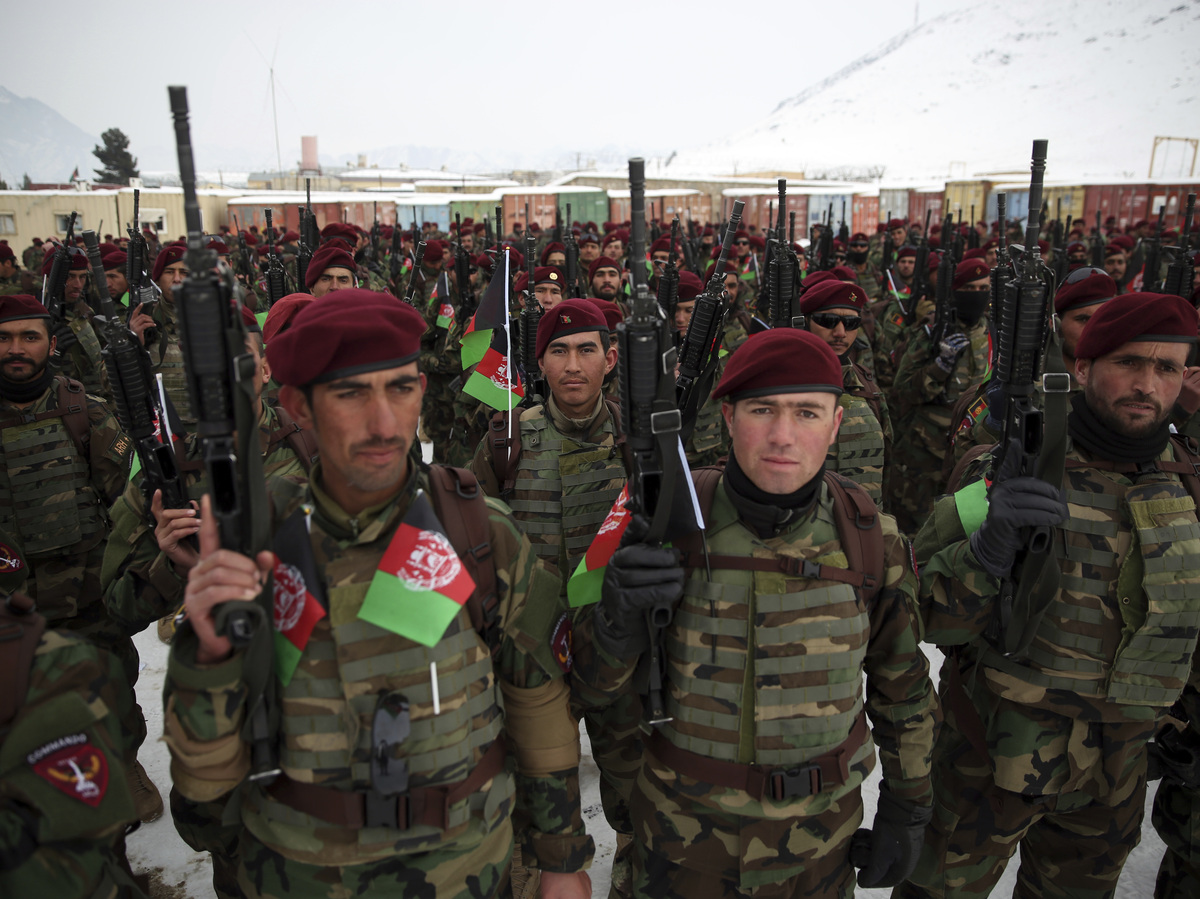 Afghan Army commandos attend their graduation ceremony after a 3 1/2-month training program, at the Commando Training Center on the outskirts of Kabul, Afghanistan, on Monday.

Nancy Lindborg is the president & CEO of the United States Institute of Peace, a nonpartisan, national, independent institute charged with the mission to reduce, mitigate and resolve violent conflict abroad. She has more than 30 years of experience working in or on fragile states around the world.

The long-term ramifications of the killing of Iranian commander Qassem Soleimani by a U.S. drone strike remain to be seen. It appears we have walked back from the brink of war between Iran and the U.S., at least for now, as both countries acknowledge the high costs of continuing down that path.

However, as this high-stakes situation plays out, the distinct danger is that Iraq and Afghanistan — the two fragile countries flanking Iran — will become collateral damage, rolling back hard-earned progress and prolonging two already drawn-out wars.

Iraq and Afghanistan are particularly vulnerable to the potential fallout of continued tensions and potential conflict. Both are gingerly emerging from long wars, with U.S. troops on the ground, and both have deeply exploitable societal fissures. Both must navigate the tricky complications of balancing their alliance with the U.S. alongside relations with Iran, a permanent neighbor that offers economic ties and often predatory behavior.

In Iraq, the stalled progress of the Global Coalition to Defeat ISIS could quickly lead to a deadly resurgence, especially if U.S. troops withdraw. While in Iraq last spring, I heard dozens of government officials and civil society leaders in both Baghdad and Irbil, in Iraq's Kurdish region, express a deep concern that ISIS was far from fully defeated with the loss of its territory. Militant cells in villages and neighborhoods continue to attack and threaten communities. Leaders across Iraq adamantly said that continued U.S. engagement was central to staving off ISIS. Yet, only a few days after Soleimani's killing, the American command in Iraq announced that the Global Coalition to Defeat ISIS paused its activities. Withdrawal plans remain murky, leaving Iraq even more vulnerable to the return of ISIS.

Opinion: Afghans' Growing Demand For Peace Is Key To Ending Decades Of War

To fully combat ISIS, the Iraqis must above all address the conditions that allowed the militant organization to take root in the first place: exclusion of certain groups, lack of basic services, corruption, the need for justice and reconciliation and a deeply ingrained lack of trust. Tens of thousands of Iraqi citizens in Baghdad and the southern provinces spent the last part of 2019 pouring into the streets with urgent calls for the government to address these concerns, and importantly, demanding diminished Iranian influence. Not only are the voices of the Iraqi people now getting lost in the current turmoil, Iran is almost certainly exploiting the situation to gain a stronger foothold in Iraq and influence the selection of its new prime minister.

On the other side of Iran, Afghanistan is also at risk of being sucked into a destructive U.S.-Iran proxy war, just as delicate peace negotiations resume between the U.S. and the Taliban. Iran can take advantage of the long relationship it has with Taliban field commanders in southwestern Afghan provinces. Or Iran can mobilize the militias of Afghans living in Iran to target U.S. interests and personnel. Terrorist groups can easily exploit the situation by expanding their networks and once again use Afghanistan as a safe haven to plan attacks and further destabilize the region. A significant threat from Iran or renewed terrorist activity could lead to the need to increase U.S. troop presence in Afghanistan — a move that would all but spell an end for a potential peace deal between the U.S. and the Taliban.

Both countries have cultural and economic ties with Iran and are vulnerable to manipulation from the nation.

Neither Iraq nor Afghanistan wants to be a pawn in a U.S.-Iran battle. America can still support local peace efforts.

For decades, Iran has hosted millions of Afghan refugees. An Afghan woman leader from Kabul tells me that Iran understands them much better than the U.S. does. "They know how to exploit us," says the leader, whose name is being withheld for her safety in Afghanistan. "They know how to mobilize us. We can expect Iran to be very active in Afghanistan now; we have to be ready."

Even before the current crisis, there was a growing call from both sides of the aisle in the U.S. Congress to pull back troops and reduce America's engagement with these two "endless wars." However, now is not the time to withdraw from Iraq or Afghanistan, either militarily, diplomatically or with our development efforts.

A precipitous withdrawal of U.S. troops from Iraq would set the stage for ISIS to return in the country, as it did for the group's emergence in 2011. Iraqi political opinion is clearly divided on whether the U.S. military should stay. Iraq's parliament recently voted that the troops should leave, but Sunnis and Kurds refused to participate. Now is the time for deft U.S. diplomacy to ensure troops can remain.

In Afghanistan, the U.S. must accelerate efforts to make a durable peace possible. Instead of a unilateral troop withdrawal that could further destabilize a very fragile country, a responsible withdrawal of U.S. troops that results from a negotiated peace deal would heed the cry for peace of the Afghan people and protect U.S. interests.

Neither Iraq nor Afghanistan wants to be a pawn in a U.S.-Iran battle. America can still support local peace efforts in both Iraq and Afghanistan, especially as their citizens demand more accountable governments. Washington should amplify its diplomatic efforts to reassure both countries of the importance of their U.S. alliance, not only in matters regarding the Iran conflict.

The U.S. should resist the temptation to simply leave the region. To truly end these "endless wars," the U.S. must act to avoid long-term, regional instability and preserve important gains in both Afghanistan and Iraq.