Accessibility links
Sprawling Homeless Camps — Modern 'Hoovervilles' — Vex California The wrangling over what to do about a sprawling homeless camp in Santa Rosa, Calif., highlights how hard it is to find answers for a growing crisis across California and much of the West. 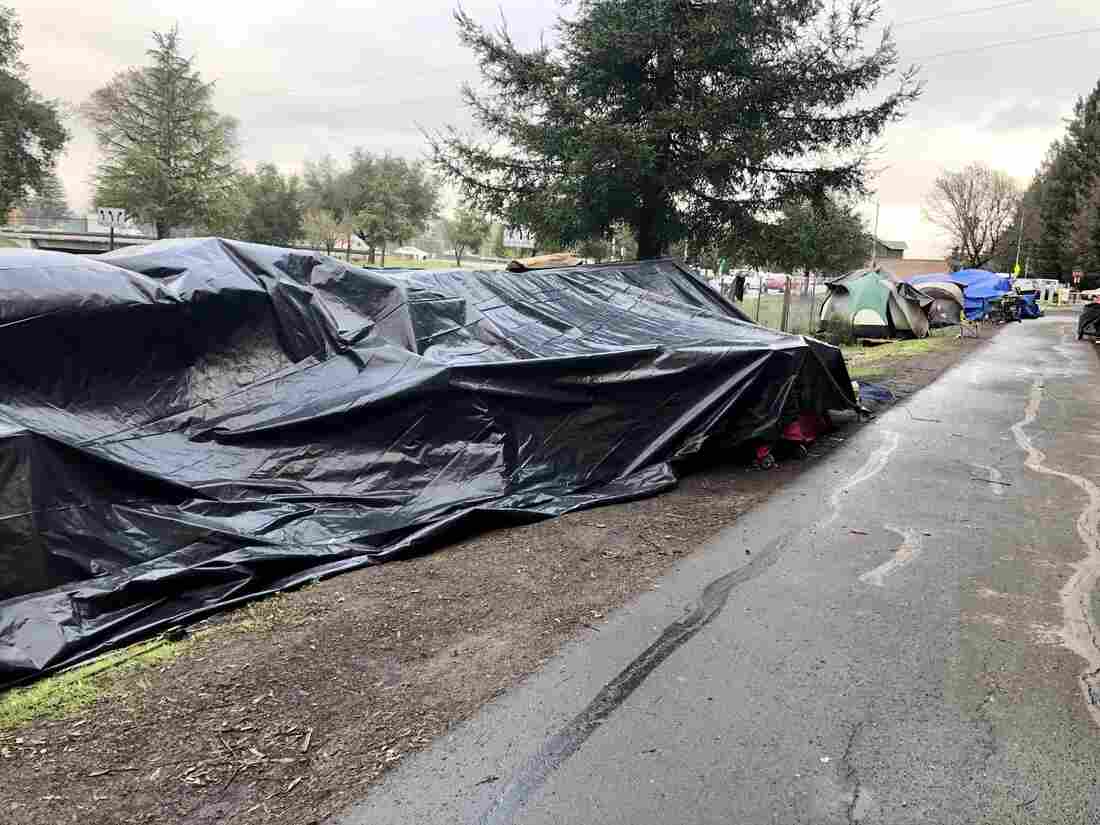 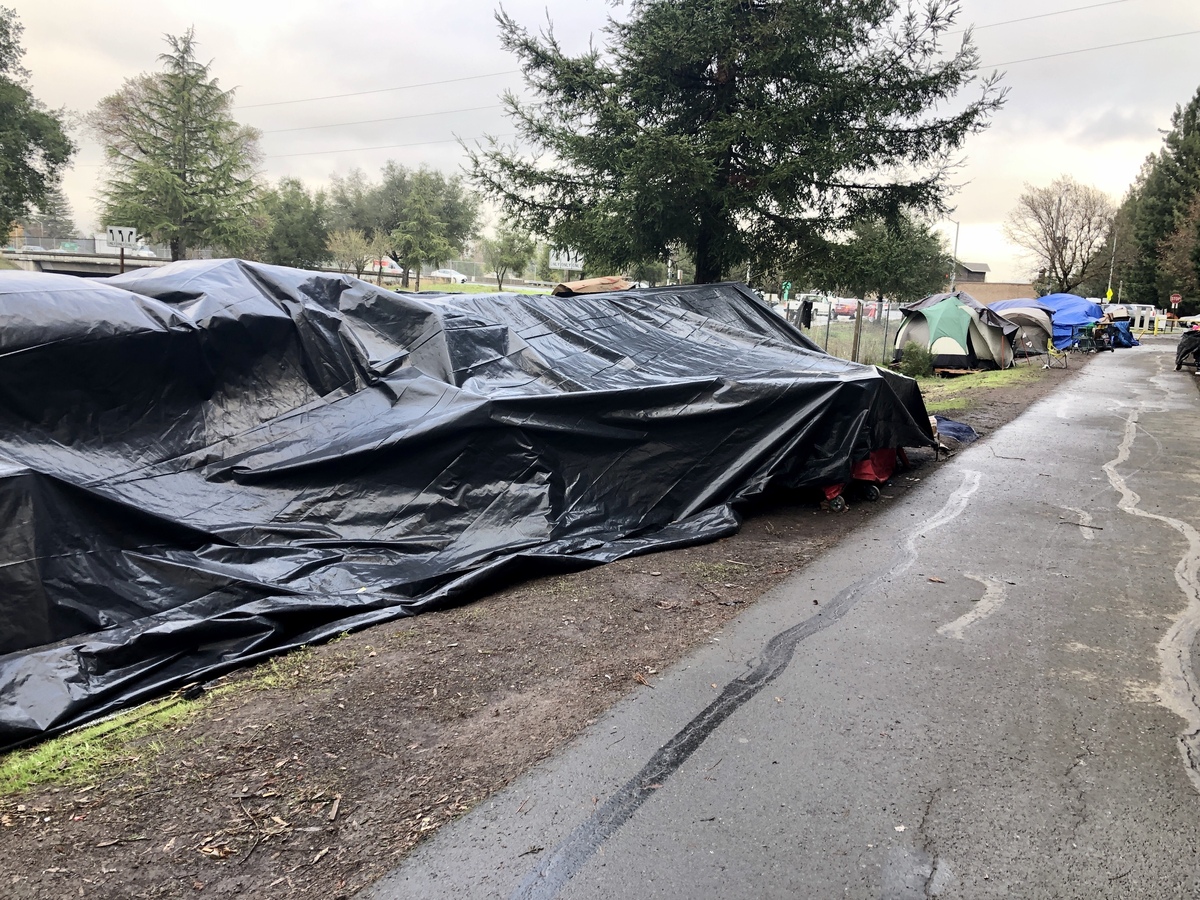 In Sonoma County, Calif., officials are struggling to address a homeless encampment with roughly 200 residents.

Charles Gibson pushes a shopping cart toward his soggy tent on a tenuous patch of a grassy drainage ditch along a bike trail in Santa Rosa, Calif. He's one of nearly 200 people living in a sprawling camp here that has sprung up along a popular recreation corridor. It's a community, Gibson says, that often feels caught between opposing forces who aren't always listening.

Across California and other parts of the country, these growing homeless encampments evoke shantytown "Hoovervilles," where hundreds of thousands of destitute Americans lived during the Great Depression. The encampments are frustrating residents, raising health and safety fears and fueling a debate over poverty and inequality in one of the nation's wealthiest states.

The fight over the encampment in Santa Rosa in Northern California's Sonoma County underscores the challenges of finding a lasting solution to the growing crisis. Amid a growing chorus of outrage at filthy, unsanitary conditions and the presence of rats and used drug needles, the camp has divided locals and even prompted an effort to recall a local politician.

"I never thought that I would drive past a mile-long shantytown on my way to work. And yet, that's the reality that we're facing right now in Sonoma County," says County Supervisor Lynda Hopkins, whose district includes the encampment.

For months, makeshift tarp, tent and pallet "homes" have filled a stretch of the paved bike trail that sides right next to Highway 12, a major commuter artery into Santa Rosa, the county seat.

"It's incredibly challenging," Hopkins says, noting she gets scores of emails each day from frustrated, alarmed and angry constituents. "I also get emails of people who are just heartbroken at seeing the level of suffering — people freezing cold, living in a tent in the rain with no access to running water or electricity or sewer services."

While homelessness is a hard-to-fix national problem, it is particularly severe in California. The state's homeless population jumped 16% in the past year. California has the highest number of tent cities, according to a report by the National Law Center On Homelessness & Poverty. And according to a new report by the Department of Housing and Urban Development, California's homeless population accounts for 53% of all unsheltered people in the country. Overall, the state has more than 150,000 people experiencing homelessness, according to the report.

Given the growing crisis, the state's governor, Gavin Newsom, recently proposed more than $1.4 billion in his new budget for expanded state and local efforts on immediate housing and services. Some $750 million of that would be placed in a special fund to pay the rent of people facing homelessness and to jump-start the construction of more affordable housing. The first-term Democrat has also ordered state agencies to do more to help find temporary sites — including decommissioned hospitals or unused land — for the state's expanding homeless encampments.

Across the state, residents are demanding robust coordinated action on what has now become a public health crisis. There are rising concerns about health and safety problems inside the encampments, including disease, open drug use, violence, crime and fire risks. In Los Angeles County alone, the death rate for homeless people has risen steadily for years and in 2018 topped 1,000 — about three deaths a day.

Living on the trail 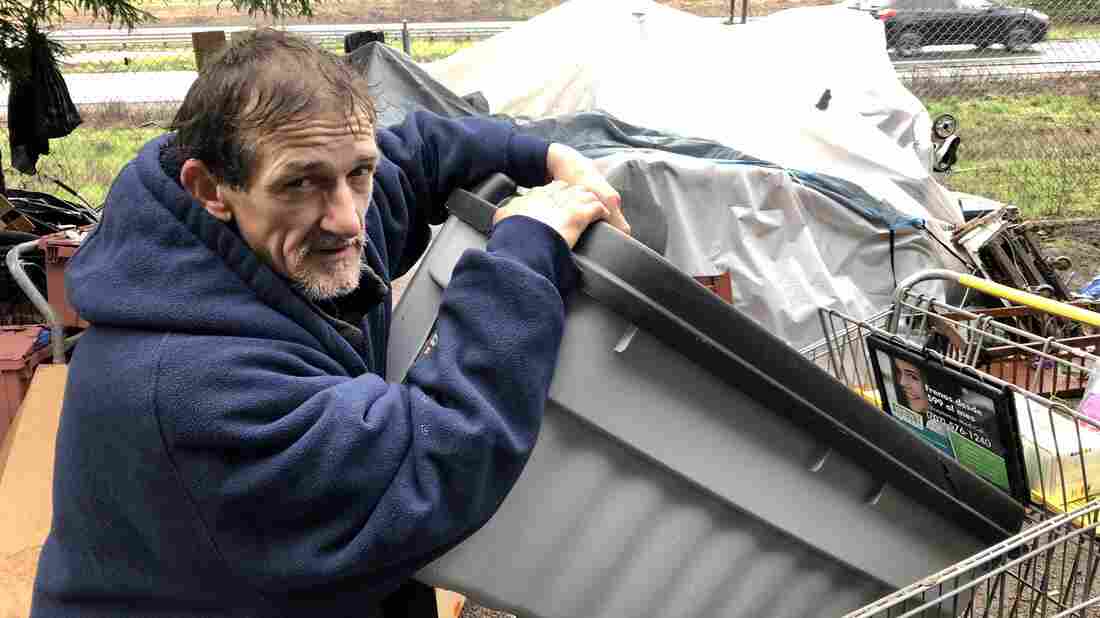 Charles Gibson, who goes by the nickname "Cowboy," lives at the tent city in Santa Rosa, Calif. "It's a struggle for anybody to keep warm and keep your heart and head light and strong," he says. "I'm doing the best I can." Eric Westervelt/NPR hide caption 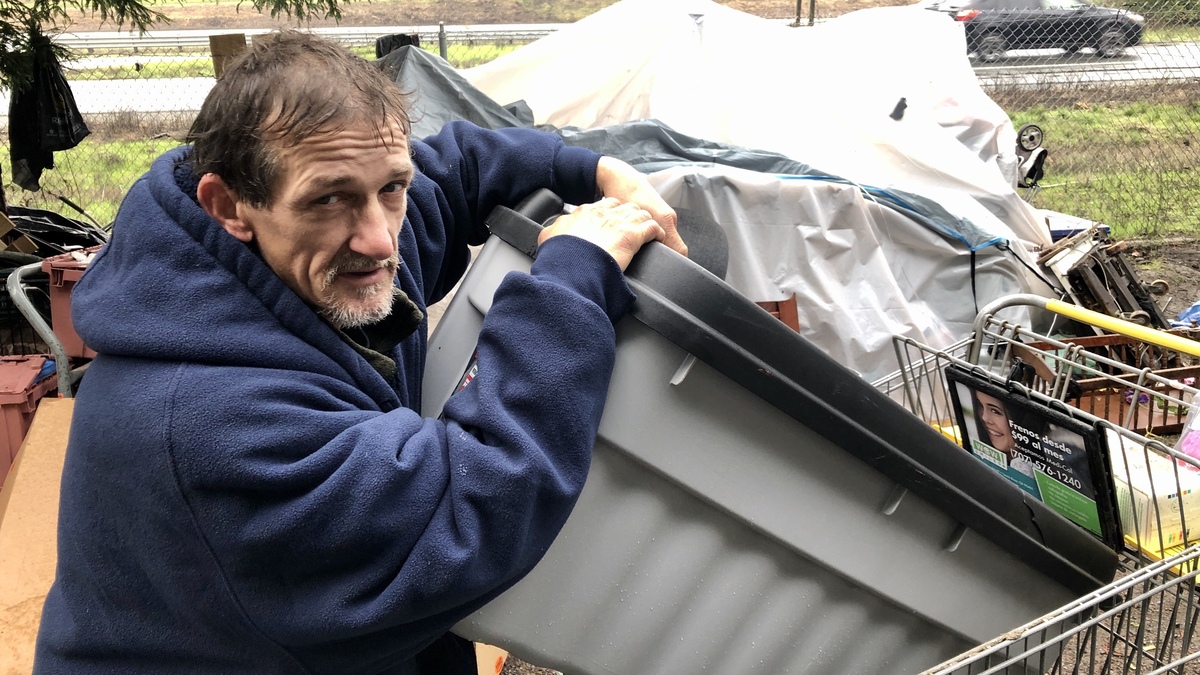 Charles Gibson, who goes by the nickname "Cowboy," lives at the tent city in Santa Rosa, Calif. "It's a struggle for anybody to keep warm and keep your heart and head light and strong," he says. "I'm doing the best I can."

Wiry, frenzied and with a ready smile through some missing teeth, Gibson says he prefers the nickname "Cowboy."

"Well, they call me Cowboy," Gibson says, "I always 'cowboy up' for other people because I take care of others when I have nothing and stretch myself thin. It's very hard," he says of life among broken pallets and ripped tarps. "It's a struggle for anybody to keep warm and keep your heart and head light and strong. I'm doing the best I can."

Gibson, who has lived here for nearly a year, says the camp has a haphazard sense of community. People watch out for each other. But he concedes the camp has serious problems with garbage, vermin, inadequate toilets and some drug use.

County and city agencies have tried to offer some services, including adding portable toilets and trash control. But camp residents say it's not enough.

"If you don't have someone taking out the trash, it's gonna pile up," Gibson says. "Some people are elderly and can't really do a lot on their own. Some are young people that are very inexperienced with life. I try to be a guiding light."

At a nearby tent, an older woman pops her head out shouting obscenities at no one in particular.

"People need to open up their eyes and realize they could end up like this," Gibson says. "A lot of people are one [pay]check away. Show some humanity."

Soon a pickup truck pulls up with donations. Time to "cowboy up," Gibson says, as he moves to help unload used warm clothes from a local resident.

"I drive by every morning and today I was just heartbroken," says commuter Vania Supulveda. "My daughter complains, 'Oh it's so cold out today' when we see this. And we go back home to a nice warm home. It's depressing. I grew up in Brazil, in a Third World country, and I've never seen something like this so close to me," Supulveda says.

"It just showcases the failure of government at all levels to meaningfully have a safety net for human beings," says Hopkins, the county supervisor. "There's just no room for error now, there's no safety net."

Hopkins has helped lead efforts to find solutions for the camp, including the allocation of nearly $12 million in emergency funds and standing up an emergency operations center to better coordinate response to a complex problem with no easy fixes.

Still, the first-term politician is facing blowback over the camp. A handful of angry constituents has started an effort to recall her, even though she already faces an election in March. Their petition accuses Hopkins of failing to act — "her watch, her failure" — and calls the homeless encampment a "public cesspool" that's undermining businesses, homes and quality of life.

Complicating attempts to find a solution in Sonoma is a local injunction that says the county can't arrest or fine its way out of the crisis.

A federal court ruling carries even more weight. The federal 9th Circuit has ruled that homeless people essentially have a constitutional right to camp on public property if local governments can't provide enough shelter beds and services. The U.S. Supreme Court declined to hear an appeal in that case.

Those are services Hopkins says the county simply can't afford now on its own.

President Trump has repeatedly criticized the state response to its homeless crisis, painting it as a result of failed Democratic leadership. He has threatened federal intervention. "It's a shame. The world is looking at it," Trump said in September.

Hopkins and other politicians are promising to relocate the camp within weeks — most likely to a parking lot area near the airport while they design a more permanent housing strategy.

But they concede that a lasting fix could take at least two years.

In the meantime, a new group of concerned citizens says that's simply unacceptable. They're asking: If the community can pull together during a wildfire crisis, why not a homeless crisis?

"We know how to do this; we know how to take care of people. We've just seen it recently with the Kincade Fire," says artist and engineer Marcos Ramirez, one of the founders of the Squeaky Wheel Bicycle Coalition. It's a volunteer group that is trying to break the familiar pattern of political outrage, hand-wringing, wrangling and inaction.

"If we can organize shelter support, huge amounts of response, emergency services, and these kinds of things," Ramirez says of the wildfires where thousands were temporarily displaced, "there's no reason why we can't do this for our unhoused neighbors. It's the middle of winter and things are only getting colder. There's no excuse for this."

The coalition has drawn up a detailed proposal to retrofit an unused section of Sonoma County's fairgrounds into a more permanent camp with onsite support, counseling and job services.

One key, coalition members say, has been spending time at the encampment to better understand the community living there.

"A friend of mind said, 'You don't know what's going on down there.' And I said, 'You're right,' " Ramirez says. "And so I went down. And so we've spent months down there on the trail and actually getting to know our neighbors. It should seem like a no-brainer that you would need to go talk to the people and ask them what they would like."

These concerned bicyclists for social change hope their ideas gain more traction. And they hope to inspire the formation of more "squeaky wheel coalitions" in cities across California — and other states — facing the same kind of homeless camp crisis.

"I don't like to use the term that we are trying to humanize these people because they're people and we shouldn't have to humanize them," says another Squeaky Wheel activist, Miles Sarvis-Wilburn.

"And yet, we're in a position where that kind of feels like what we have to do now," he says. "It seems like that should be more normalized."