Accessibility links
In New Book, Retired Pope Benedict Breaks Silence To Speak Out On Priestly Celibacy The surprise move is seen as a rebuke to Pope Francis, who is weighing whether to allow older, married men to be ordained in some South American countries, where a shortage of priests is acute. 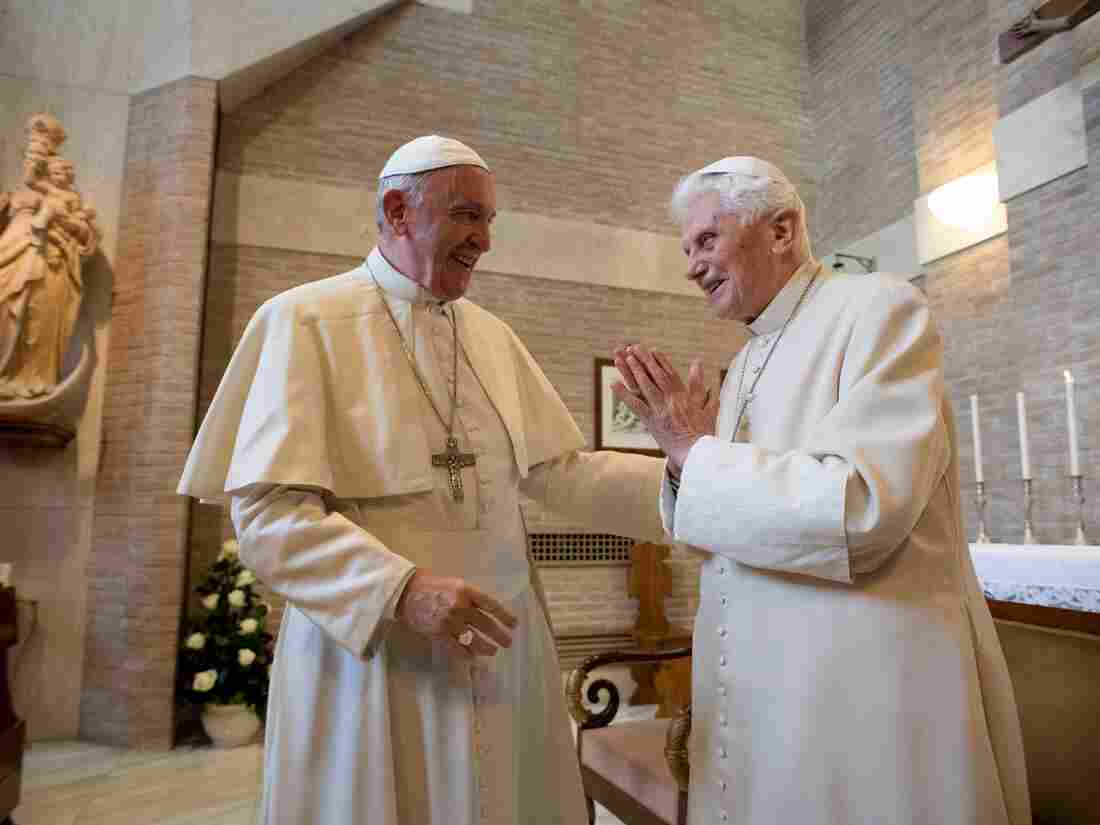 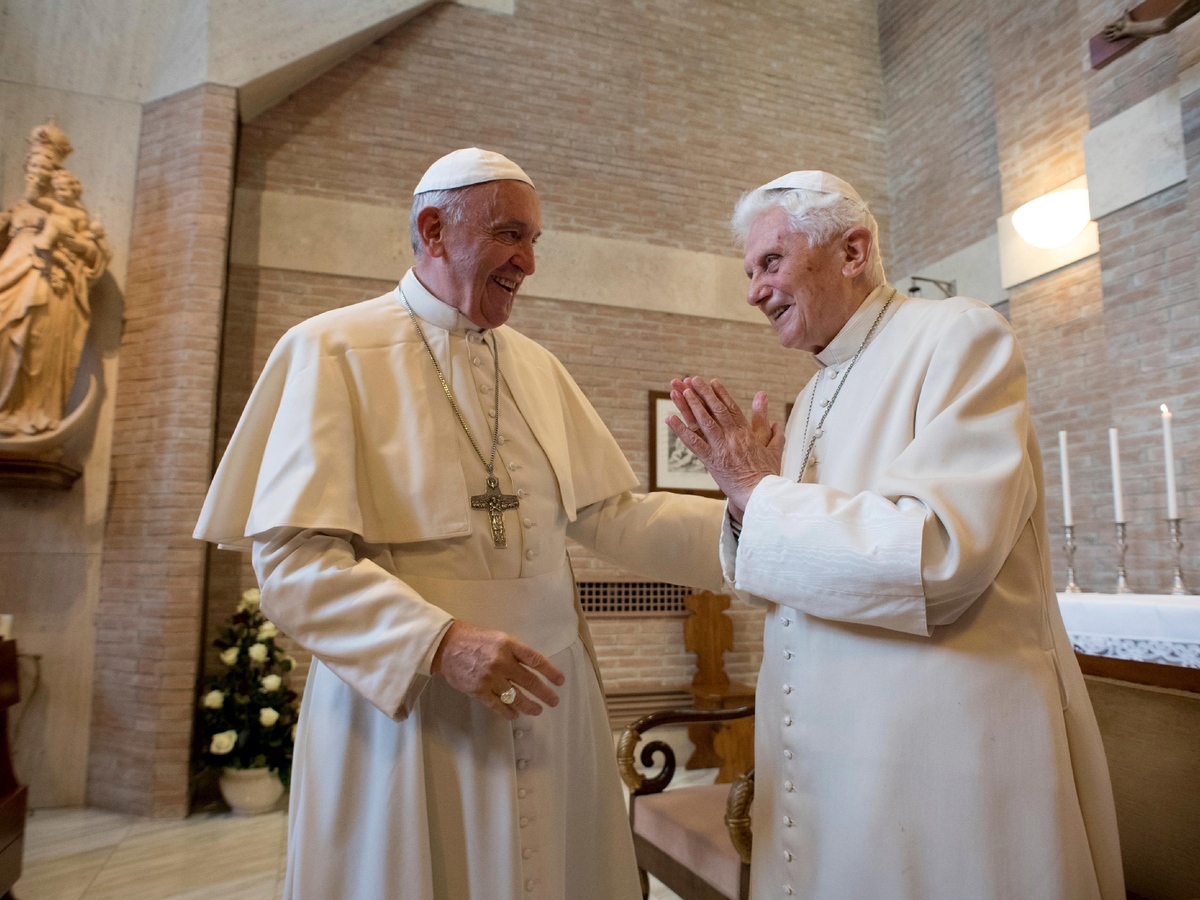 Pope Francis (left) talks with Pope Emeritus Benedict XVI in the former Convent Mater Ecclesiae at the Vatican in 2016, three years after Benedict stunned the Catholic Church by resigning to become pope emeritus.

Retired Pope Benedict XVI, who promised to remain silent when he resigned as head of the Roman Catholic Church seven years ago, has stepped back into the ongoing debate over priestly celibacy with a new book defending the traditionalist view.

The surprise move is seen as a rebuke to Pope Francis, who is weighing the possibility of a revolutionary move to relax the strict celibacy requirement for ordination in some South American countries where the shortage of priests is particularly acute.

In the as-yet-unpublished book, whose title translates as From the Depths of Our Hearts, Benedict and his co-author, Guinean Cardinal Robert Sarah, defend the "necessity" of celibacy in the priesthood. On Sunday, the French newspaper Le Figaro printed excerpts, which were also obtained by The Associated Press.

"The priesthood of Jesus Christ causes us to enter into a life that consists of becoming one with him and renouncing all that belongs only to us," the pope emeritus writes. "For priests, this is the foundation of the necessity of celibacy but also of liturgical prayer, meditation on the Word of God and the renunciation of material goods."

Since a married man is devoted entirely to his family and "serving the Lord" requires a similar degree of devotion, "it does not seem possible to carry on the two vocations simultaneously," which is why celibacy "became a criterion for priestly ministry," according to the authors.

In countries such as Brazil, a shortage of priests prevents many faithful from attending Mass for months at a time. In October, a monthlong meeting of senior clergy in South America, the Synod of Bishops for the Pan-Amazon Region, ended with a vote to suggest that the pope allow older, married men to be ordained to fill the shortfall.

Francis is said to be preparing a response to the synod's recommendation.

Excerpts of the book indicate that the 92-year-old Benedict, and Sarah, a fellow conservative, wrote separate portions, according to the National Catholic Reporter.

In a joint introduction, the co-authors said they had written "in a spirit of filial obedience, to Pope Francis." However, they also said the current "crisis" in the church compelled them to speak out.

In one passage, Sarah addresses the current pontiff directly: "I humbly beg Pope Francis to ... veto any weakening of the law of priestly celibacy, even limited to one or the other region."

"It is urgent and necessary for everyone — bishops, priests and lay people — to stop letting themselves be intimidated by the wrong-headed pleas, the theatrical productions, the diabolical lies and the fashionable errors that try to put down priestly celibacy," the authors write, adding that the practice helps the church "[protect] her mystery."

Upon stepping down from the papacy on Feb. 28, 2013, the conservative Benedict pledged to remain "hidden from the world" and promised "unconditional reverence and obedience" to his successor.

Even so, this is not the first time that Benedict has contradicted the more liberal-minded Francis by commenting from his position of retirement on current issues in the church. In a 6,000-word essay released last April, the pope emeritus blamed the church's sex abuse scandal on the secularization of the West, the sexual revolution of the 1960s and more generally, "the absence of God."

Massimo Faggioli, a noted historian and theologian at Villanova University, told the National Catholic Reporter that Benedict's decision to write the book was a "serious breach."

"It interferes with a synodal process that is still unfolding after the Amazon synod ... and threatens to limit the freedom of the one pope," Faggioli said.