Accessibility links
4 Tips To Help You Quit Smoking : Life Kit Trying to quit smoking can be hard. The good news is the science behind how to quit smoking is very clear. This episode gives you strategies to help boost your chances of success. 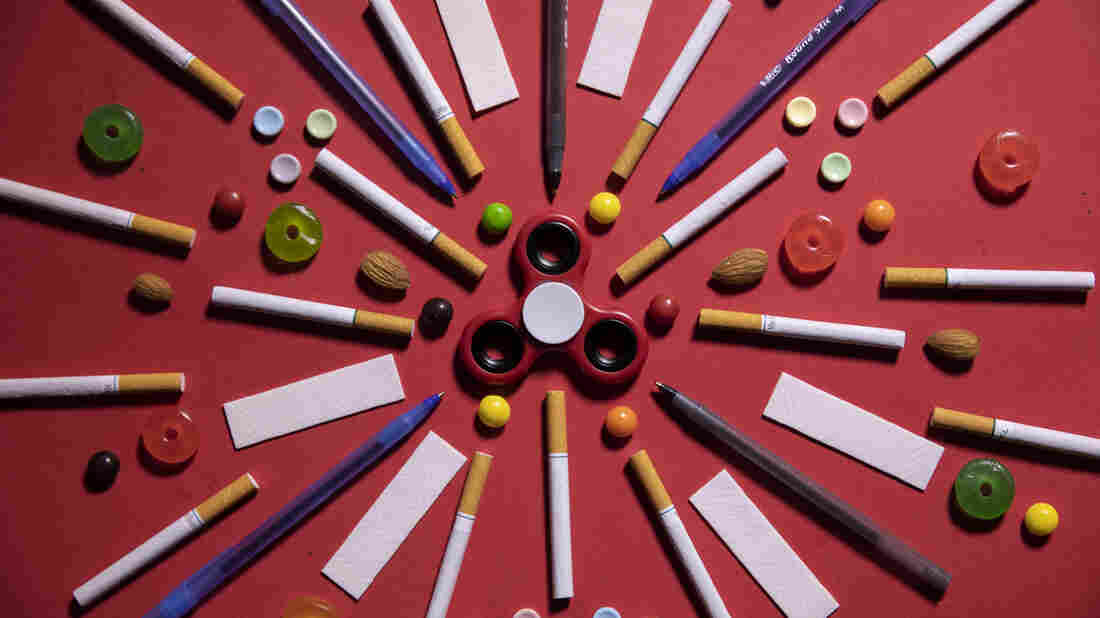 Quitting smoking isn't easy, and while gum or a fidgeting device may not be a silver bullet, cravings can be linked to your daily routine. Thinking of a substitute behavior to use when a craving strikes is one tool that could help you quit. Andee Tagle and Becky Harlan/NPR hide caption 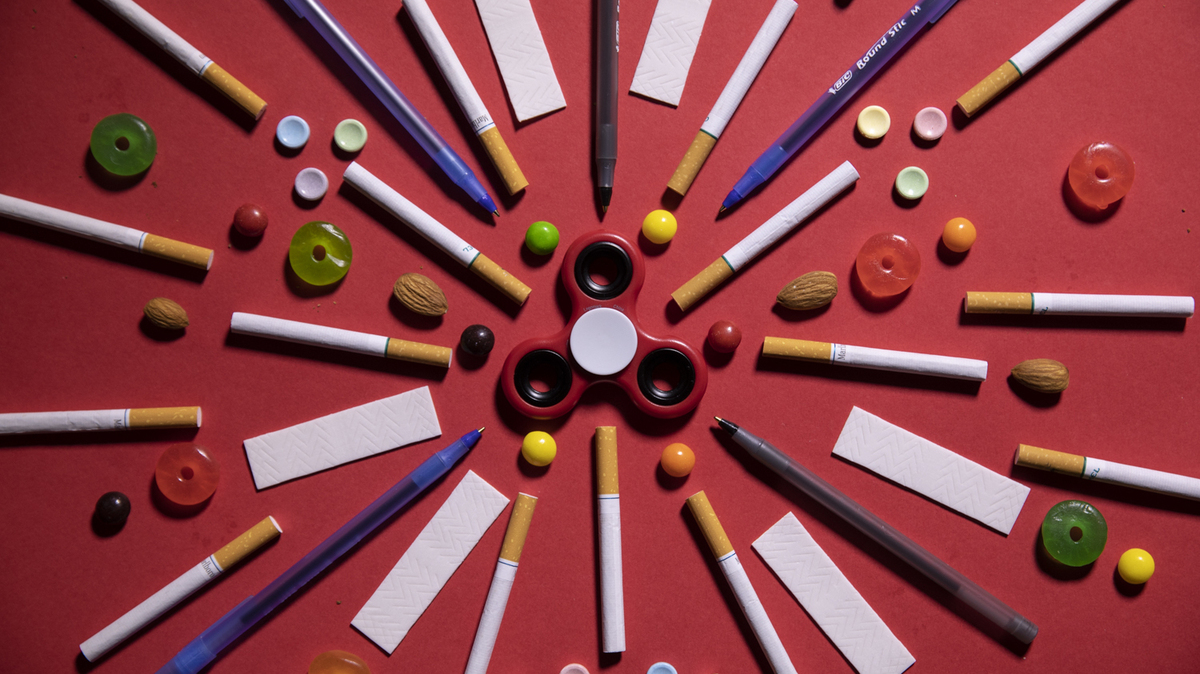 Quitting smoking isn't easy, and while gum or a fidgeting device may not be a silver bullet, cravings can be linked to your daily routine. Thinking of a substitute behavior to use when a craving strikes is one tool that could help you quit.

Smoking can be an easy habit to pick up and a hard one to quit.

Here's the good news — there are decades of research on how to drop the habit. And we heard from hundreds of former smokers about how they did it.

If you've tried to quit before, and it didn't work out, don't let that discourage you from trying again. It's common for quitting to take multiple attempts.

"It's not a one time event. It is a process," says Gary Tedeschi, the clinical director at the California Smokers' Helpline. "And if I could say nothing else, I would say never ever stop trying to quit."

We heard about a wide range of methods that helped people quit—and the truth is that no one method will work for everyone. But it's clear that having a roadmap for how you want to quit is going to boost your chances of succeeding.

"A lot of smokers, when they are thinking about quitting, they sort of dive in without a plan," says Yvonne Prutzman, a scientist from the National Cancer Institute's Tobacco Control Research Branch.

"And maybe the plan is to rely on willpower — but that makes it a lot harder for them," she adds.

Your plan might be pretty personal. People quit many different ways — and reach the conclusion that they need to quit for very different reasons.

For example, for Stacey Moore from Georgia, a serious health scare prompted her decision. "Just a couple of weeks ago I woke up with what I thought was a cancerous lump in my throat," she tells NPR. "It turned out to just be tonsillitis but it scared me enough that I knew I just had to stop, I just can't play this roulette game anymore."

Others, like Greg Moulton from South Carolina, spent months or even years preparing to quit, slowly reducing the amount of nicotine they were taking in every day. "You slay the beast slowly and let it bleed to death on its own," he says.

As you think through your plan, it may be helpful to think about the many sides of your addiction and how you'll handle each.

Those many sides constitute what Tedeschi calls the "four-headed dragon of addiction":

When forming your plan, consider what treatments have scientific backing. The vast majority of people who attempt to drop the habit will not actually use treatments that are proven to help. "Only a third of smokers who try to quit actually use evidence-based cessation treatments," says Prutzman.

2. Medication and counseling are backed by years of research on quitting smoking

These two strategies — ideally used together — can greatly increase your chances of having a successful quit attempt.

"I think it's really important for the smoker to know that, you want to give the best shot possible in order to help yourself quitting," says Dorothy Hatsukami, a scientist from the University of Minnesota who has published literally hundreds of research papers on tobacco and nicotine.

"The chances of success are doubled or even tripled if somebody used evidence-based smoking cessation treatments if they try to quit," Prutzman adds.

A counselor can help you make a plan that's tailored to your needs. You can reach one in any state for free, at 1-800-QUIT-NOW.

And there are seven medications approved by the U.S. Food and Drug Administration to help people quit. They help ease withdrawal symptoms so you can focus on battling other tough things about quitting smoking, like getting into new routines.

Five of the medications are various forms of "nicotine replacement therapies." They'll deliver nicotine, but not through a cigarette. They come in the form of a gum, an inhaler, a lozenge, a nasal spray, or a patch.

There are also two non-nicotine medications that are prescribed for quitting smoking: Varenicline (marketed as Chantix) and Bupropion (marketed as Zyban).

3. Simple strategies can help you navigate the tough things about quitting smoking

Cravings for a cigarette might be linked to your daily routine — for example, you may experience them in particular at times when you used to smoke. You should try to plan for a substitute or an alternative behavior.

When a craving hits, try to remember that it will pass. And it's probably going to be easier to do something to distract yourself than to stare at the wall and think about smoking.

"I started doing push ups every time I wanted a cigarette. And that really just changed my whole outlook and also lost 70 pounds in the process," says Miyoshi Juergensen from Alabama.

You should also prepare yourself by thinking about your social environment and where you might feel tempted to smoke. Prutzman notes that a very helpful thing for smokers is "finding the people in your life who are going to support you and cheer you on, and just help you along the way."

And a big part of quitting is transitioning your self-image from "smoker" to "non-smoker."

4. Embracing other things in your life could help you quit

There's some evidence that new and exciting life events are linked to dropping the habit for good. Psychologist Mona Xu from Idaho State University studies the link between quitting smoking and engaging in things that are novel, exciting or challenging.

In a study of current and former smokers, she found that people who dropped the habit for good had about double the number of new and novel experiences in the lead-up than those who went back to smoking.

So what does this mean? Xu says it doesn't necessarily mean you should pick up a new hobby. But it might hint at when to try a quit attempt. "What this research suggests is that when you have other forms of reward and motivation when you have things that are interesting to you happening in your life besides smoking that might be a good time to think about quitting," says Xu.

And while timing it to an exciting, active time could help, we should say that there isn't a bad time to think about stopping smoking.

In fact, experts told us about recent research focused on smokers who said they weren't ready to quit. They asked these smokers to use some of the quit smoking medications anyway. And they found that this actually worked to increase the odds that the smoker who wasn't ready to quit make a quit attempt in the future.

So even if you're not prepared to set a quit date, there are things you can do to move yourself in that direction. Like smoking one less cigarette than you did yesterday. Maybe just see how it feels.

For more on how to quit smoking, listen to the podcast episode or visit our Reddit AMA with tobacco addiction expert Dorothy Hatsukami, Ph.D.:

I’m Dorothy Hatsukami, Ph.D., a professor of psychiatry and a cancer researcher. I’ve conducted studies on tobacco addiction and its treatment for over 30 years. Recently, I worked with NPR’s Life Kit podcast on an episode about how to break the smoking habit — Ask me anything! from r/IAmA

Trying to quit? We'd love to hear how it's going. Send us an email at lifekit@npr.org or update us on Twitter @NPRLifeKit.