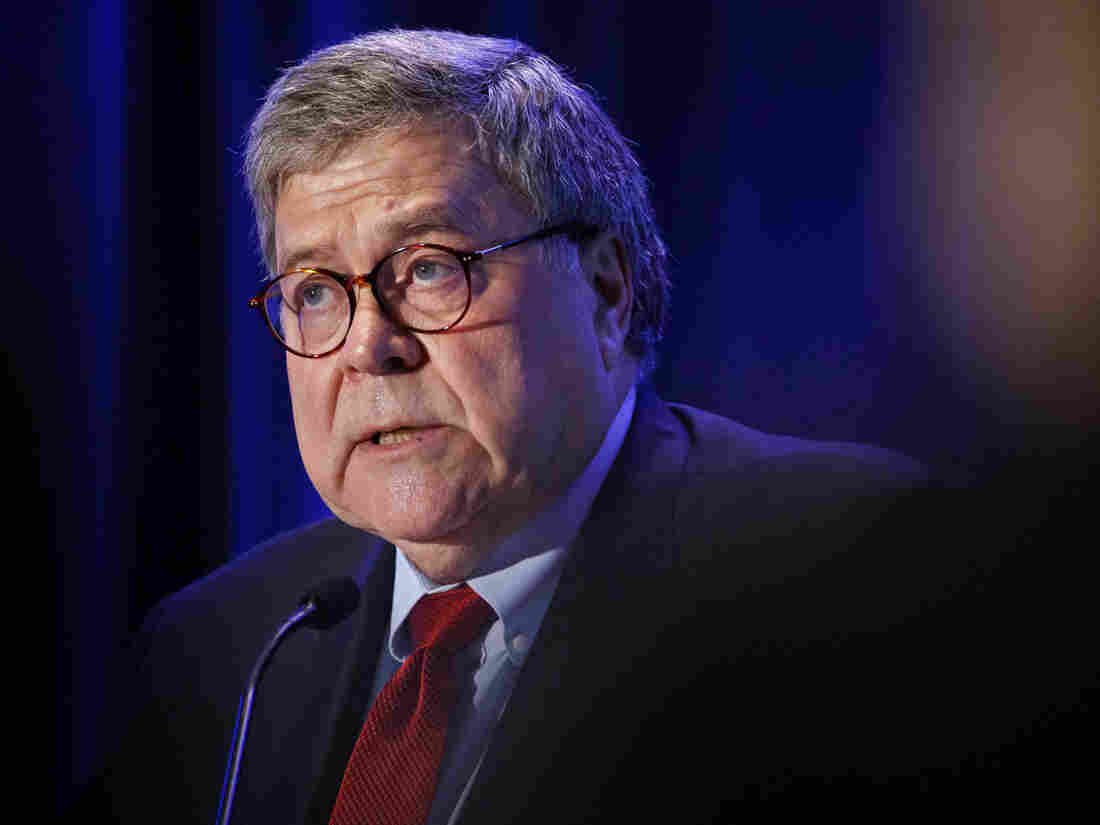 Attorney General William Barr announced an update in the investigation of the deadly shooting last month at a naval base in Pensacola, Fla. He said Monday: "This was an act of terrorism." Jacquelyn Martin/AP hide caption 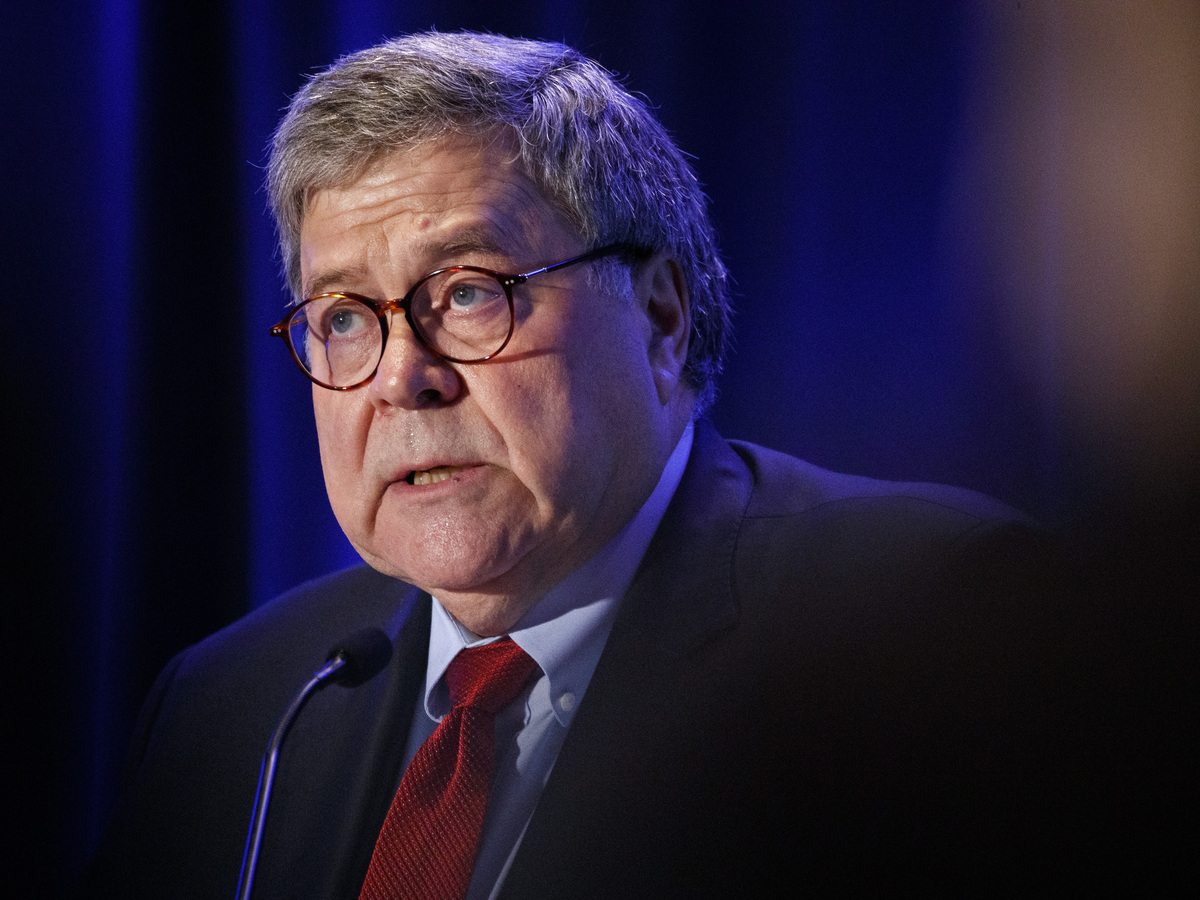 Attorney General William Barr announced an update in the investigation of the deadly shooting last month at a naval base in Pensacola, Fla. He said Monday: "This was an act of terrorism."

Attorney General William Barr announced Monday that 21 Saudi military cadets studying at U.S. military bases are being sent back to their home country after investigators found child pornography, "jihadi or anti-American content" on accounts or devices associated with the students.

The announcement comes a month after a Saudi national opened fire in a classroom at a naval base in Pensacola, Fla., killing three young sailors and wounding eight others.

"This was an act of terrorism," Barr said, adding that the shooter was "motivated by jihadist ideology."

Federal authorities said Monday that investigators have not identified any co-conspirators in the attack. The gunman does not appear to have acted on behalf of any terrorist organization.

"Social media attributed to the shooter suggests that he harbored anti-U.S. military and anti-Israel sentiments," said FBI Deputy Director David Bowdich, "and that he thought violence was necessary to defend Muslim countries."

The incident renewed scrutiny of foreign military exchange programs. Some 850 Saudi trainees currently study alongside U.S. military personnel under such programs, but federal officials halted all Saudis training in the U.S. in the wake of the shooting.

Of the 21 Saudis now in the process of being removed from the U.S., investigators found that 17 had shared social media posts that were either jihadi or anti-American in nature, Barr said.

About 15 individuals had "some kind of contact" with child pornography, Barr noted.

"While one of these individuals had a significant number of such images, all the rest had one or two images, in most cases posted in a chat room by some other person or received over social media," Barr said.

The move by the U.S. was made in consultation with the Saudi government. Barr said federal prosecutors did not find that any of the material unearthed or actions by the 21 Saudi trainees rose to the level of criminal charges in the United States.

"However, the kingdom of Saudi Arabia determined that this material demonstrated conduct unbecoming an officer in the Royal Saudi Air Force and in the Royal Navy. And the 21 cadets have been disenrolled from their training curriculum from the U.S. military and will be returning to Saudi Arabia later today," Barr said Monday.

Federal officials say the Saudi government has fully cooperated with the investigation.

About 28,000 Saudis have gone through military training in the U.S. over several decades, according to the Saudi Embassy in Washington, which issued a statement on Monday portraying the Pensacola gunman as an isolated actor.

"The disturbed and radicalized individual who carried out this terrible attack acted alone," according to the statement. "He does not represent the hundreds of thousands of Saudis who have lived, studied and trained in the United States over the past several decades, nor does his heinous act represent the values of Saudi Arabia."

In addition, the embassy stated that the country's authorities are committed to working alongside U.S. officials in combating global terrorism.

"The kingdom has worked closely with the US to counter this global threat," said the embassy's statement.

On Sunday, NPR reported that more than 20 Saudi nationals would be expelled from the U.S. military exchange program after investigators uncovered the links to the extremist and pornographic content.

Prior to the shooting in Pensacola, Barr said, the gunman made statements critical of U.S. military actions overseas. Weeks before the rampage, the shooter visited a memorial to the Sept. 11 attacks in New York City and posted to his social media that "the countdown has begun," Barr said.

Witnesses said that during the Dec. 6 shooting, which lasted about 15 minutes, the assailant fired at photographs of President Trump and former U.S. presidents. The gunman was shot and killed by a sheriff's deputy.

Investigators recovered a semiautomatic handgun with an extended magazine from the scene. The weapon, Barr said, had been legally purchased.

Barr also said federal authorities are struggling to gain access to digital evidence on two Apple phones used by the gunman, despite having court orders to be able to review the phones.

"It is very important for us to know with whom and about what the shooter was communicating before he died," Barr said. "We have asked Apple for their help in unlocking the shooter's phones. So far, Apple has not given any substantive assistance."

Apple has said it would not assist the Justice Department by turning over private information from the gunman's phones on messaging applications such as WhatsApp and Signal.