Accessibility links
China To Test Its Own Digital Currency. Will It Rival The Dollar Someday? Bitcoin promises users anonymity, but transactions using China's digital currency would be tracked by its central bank. Experts say it could someday rival the dollar in international payments. 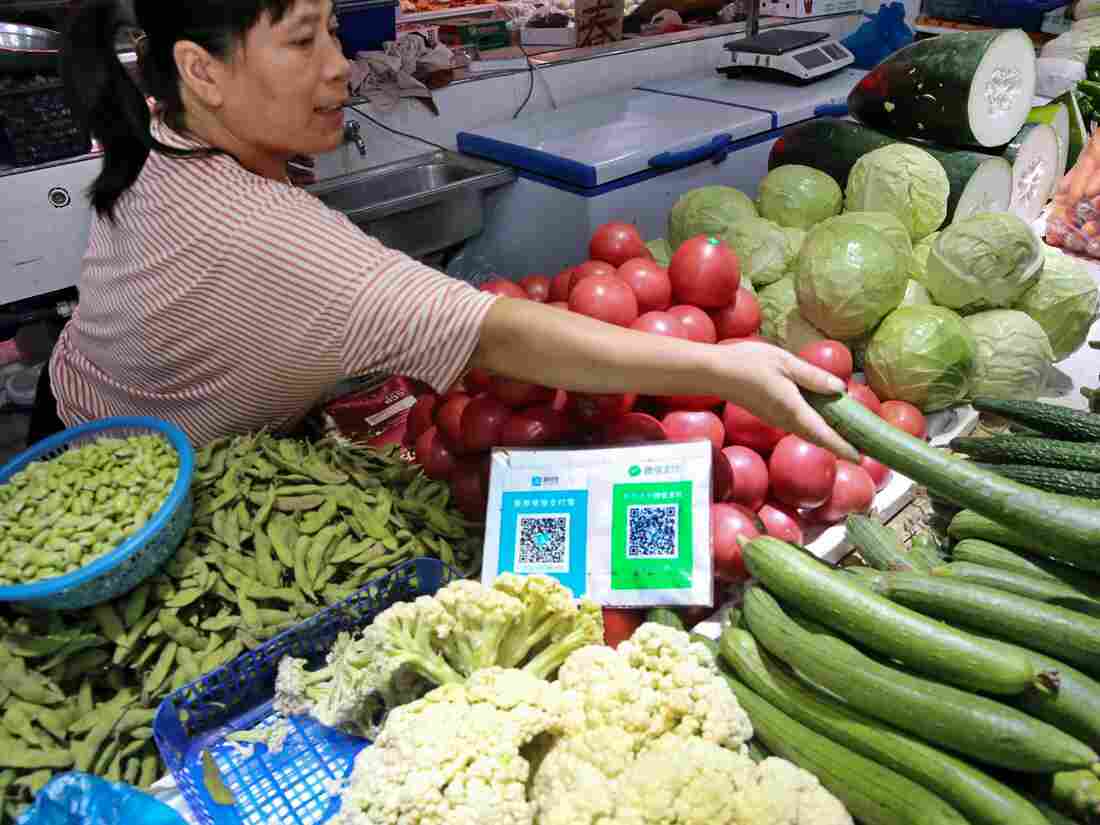 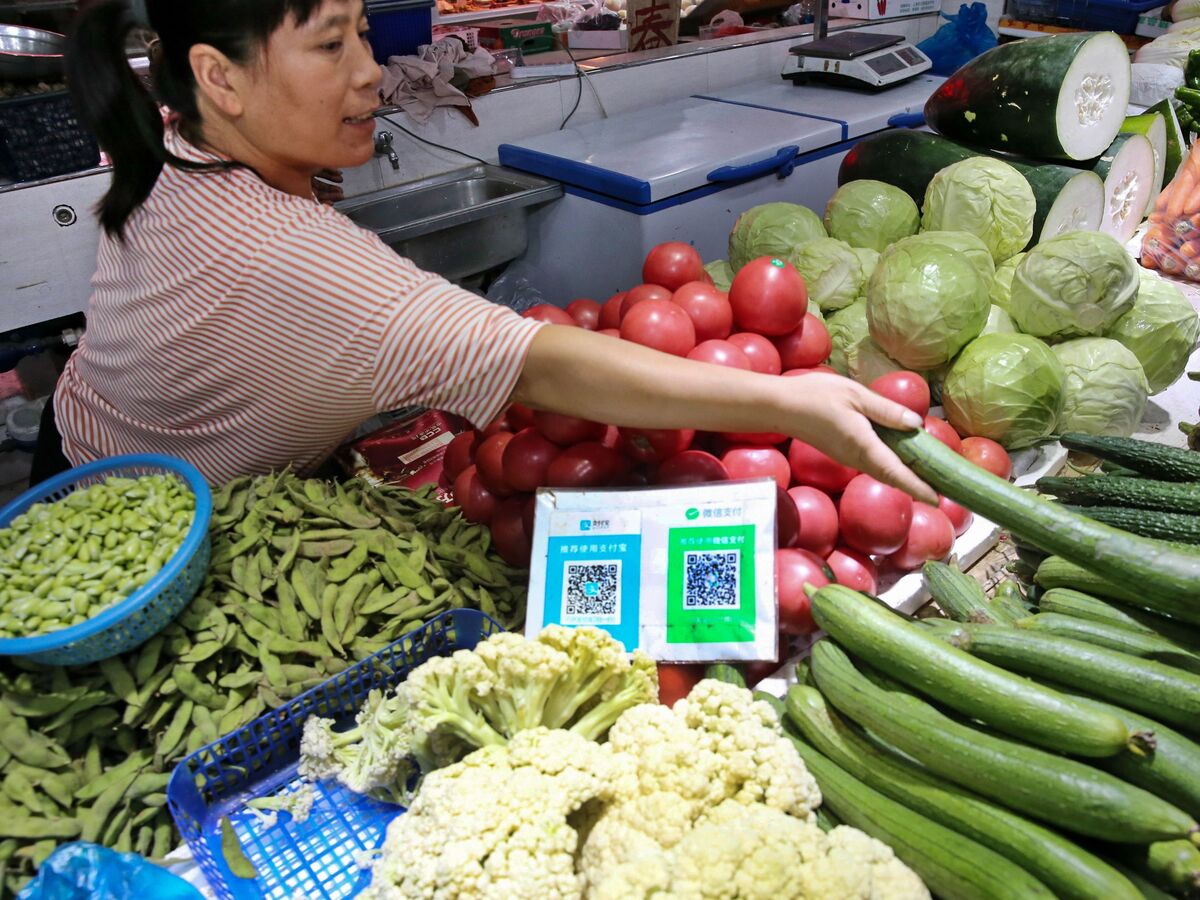 Alipay and WeChat QR codes for online payment are displayed at a vegetable stall in Nantong in China's eastern Jiangsu province. Now China's central bank is preparing to test a digital currency.

China is light-years ahead of the United States in doing away with old-fashioned paper money. Now China's central bank is preparing to test a digital currency. And some observers say it could mark the beginning of a new economic arms race, challenging the supremacy of the U.S. dollar.

Already, hundreds of millions of consumers in China have grown used to paying for purchases without cash, using popular smartphone apps such as WeChat and Alipay.

"Everything is immensely convenient" in China, said Martin Chorzempa, a research fellow at the Peterson Institute for International Economics. "You pretty much only need these two apps to do just about anything. You walk into a restaurant, scan a code and order your food. You don't have to wait for a waiter. All the payments are automatic. It's quite extraordinary."

Chinese tech companies — counterparts to Amazon and Facebook — took the lead in developing this system. They leapfrogged ahead of their U.S. competitors out of necessity, because China didn't start out with a well-established payment system built on credit cards.

"When Amazon started, it wasn't a major challenge to figure out, 'Well, how are people going to pay for the books that they order?' " said Patrick Chovanec, chief strategist at Silvercrest Asset Management. "With China, a lot of people didn't have credit cards, so they had to come up with ways to facilitate their customers doing this."

Now that tech companies have paved the way, China's central bank wants a piece of this digital action. The bank has been working on a digital currency for the last six years, but the effort shifted into overdrive last summer after Facebook unveiled plans for its own electronic form of money, called Libra.

"They are definitely one of the most advanced central banks in the world in thinking about and moving forward on this issue," Chorzempa said.

China's central bank worried that if nearly 2.5 billion Facebook users suddenly had their own electronic currency, China's digital money could be left in the dust. The bank raced to complete design work and is now reportedly preparing for the first pilot tests of its digital currency.

The digital yuan is expected to function more like its paper cousin than a cryptocurrency such as Bitcoin. Its value is tied to the regular yuan, so it's expected to be relatively stable. And the central bank will be able to monitor every transaction, so it won't have Bitcoin's anonymity.

"Actually, the term that the central bank officials in China have used is 'controllable anonymity,' which is one of the most Orwellian statements one could think about," Chorzempa said.

If China stepped on the gas following Facebook's announcement, regulators in the U.S. hit the brakes.

"Libra raises a lot of serious concerns, and those include around privacy, money laundering, consumer protection and financial stability," Federal Reserve Chair Jerome Powell told lawmakers last July. "Those are going to need to be thoroughly and publicly assessed and evaluated before this proceeds."

Libra has also faced skepticism from other industrialized countries. Some of Facebook's original partners in the venture, including Visa and Mastercard, have backed out.

But Facebook CEO Mark Zuckerberg is undaunted, casting the currency race as an international competition.

"China is moving quickly to launch a similar idea in the coming months," Zuckerberg told a House committee in October. "If America doesn't innovate, our financial leadership is not guaranteed."

"We're right at the edge of a kind of gigantic technical change," James said.

He says China's new digital currency could come to rival the dollar as an international means of payment.

Other observers are more skeptical.

"We're still in the really early stages of this," said Erik Nelson of Wells Fargo Securities. "If China really wants to establish itself as the main reserve currency and try and dethrone the dollar, it's going to have to take a lot more steps on the governance front, on opening up its markets to foreign investors. I don't think digitization is going to be the thing that does it."

Digital currencies could make financial transactions cheaper, easier and more efficient. To the extent they catch on, though, they could also trigger an upheaval in the global financial system — regardless of whether they're sponsored by an American tech giant or the Chinese central bank.