Accessibility links
After Quakes, Puerto Rico's Electricity Is Back On For Most, But Uncertainty Remains Puerto Rico's public utility, PREPA said 99% of its customers' electricity has been restored following last week's 6.4 earthquake. Thousands remain in makeshift camps unsure when they can return home. 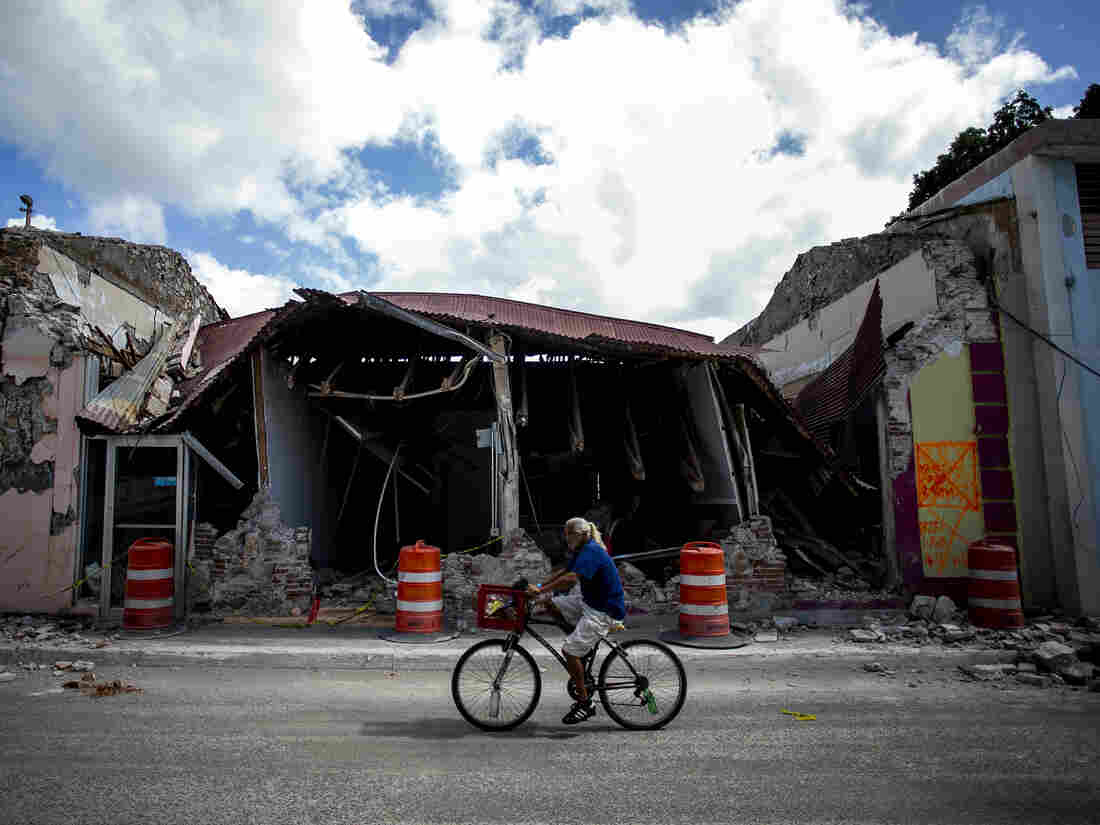 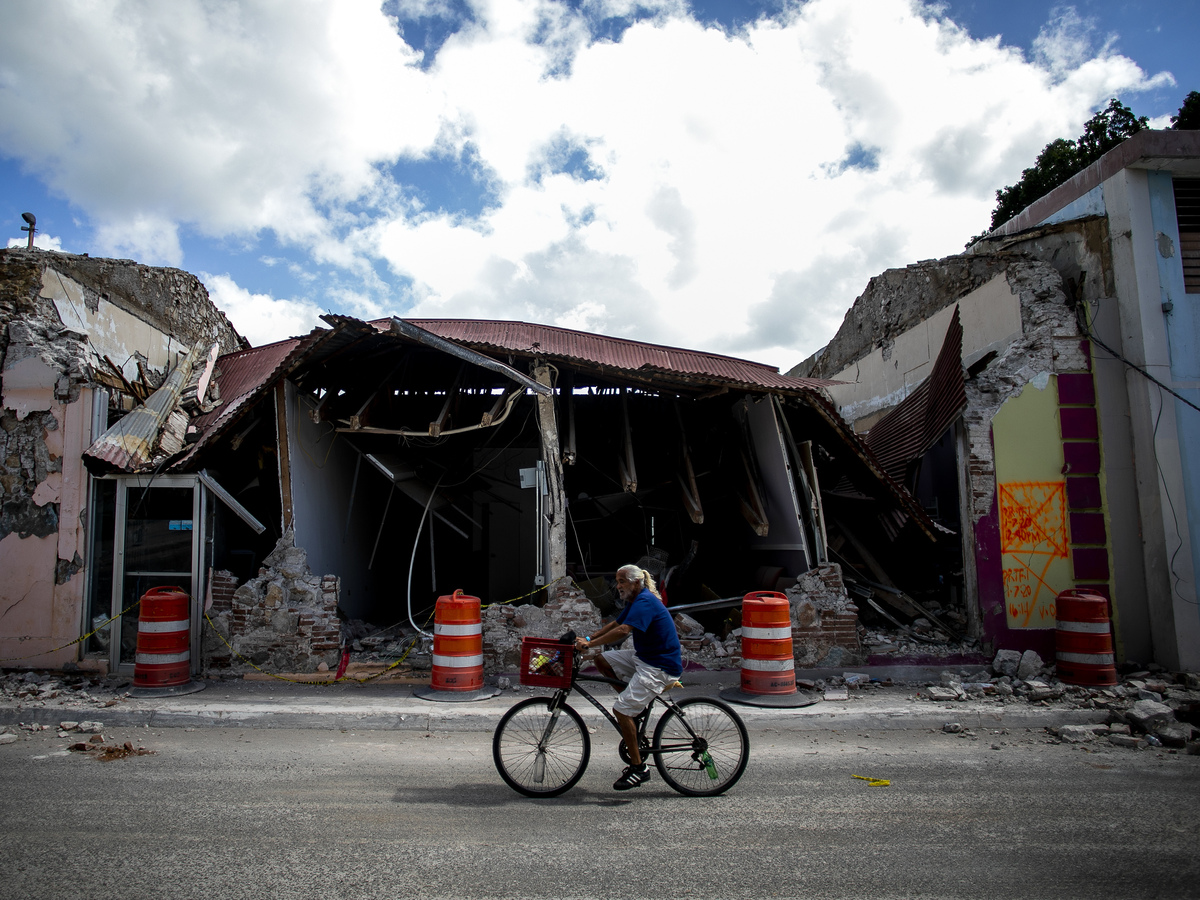 A cyclist rides past a destroyed building in Guanica, Puerto Rico. The island was hit by a series of earthquakes over the past couple of weeks, leading to a state of emergency, power outages and millions of dollars of damage.

Some in Puerto Rico are beginning to fear the ground will never stop shaking.

The island has been pummeled by hundreds of earthquakes in recent weeks, including Saturday's 5.9 magnitude temblor, where there were reports of landslides in the town of Peñuelas along the southern coast, rattling residents already on edge from last Tuesday's massive 6.4 magnitude quake.

That was the largest to strike the island in more than a century causing hundreds of structures to crumble, forcing thousands from their homes and leaving millions without power. One person was killed and several others injured.

Utility says 99% of customers have electricity

Puerto Rico's public utility, PREPA, tweeted some welcome news Monday: that nearly all of the homes and businesses it serves have had electric power restored. Still it is urging customers to conserve energy.

He also reports many residents are still reeling from the devastation caused by Hurricane Maria, a deadly Category 4 storm that battered the island in September 2017. The storm exposed the fact that buildings across the island were not up to code. The series of earthquakes are only amplifying fears that structures have been further weakened.

Florido spoke to one displaced resident, Leticia Espada, who said more than 50 homes in her town of Guayanilla, about an hour drive east of the port city of Ponce, had collapsed.

After sleeping outside for days on her patio following Tuesday's quake, she eventually came to her town's baseball stadium where she's been sleeping on one of hundreds of government-issued cots.

She's like so many others sleeping in open-air shelters, many unwilling to go back to their homes until they've been deemed safe.

"Thousands of people across several towns sleeping in tents or under tarps, or out in the open, protected by nothing but the shade of a tree with no sense of when these quakes are going to stop," Florido reports. 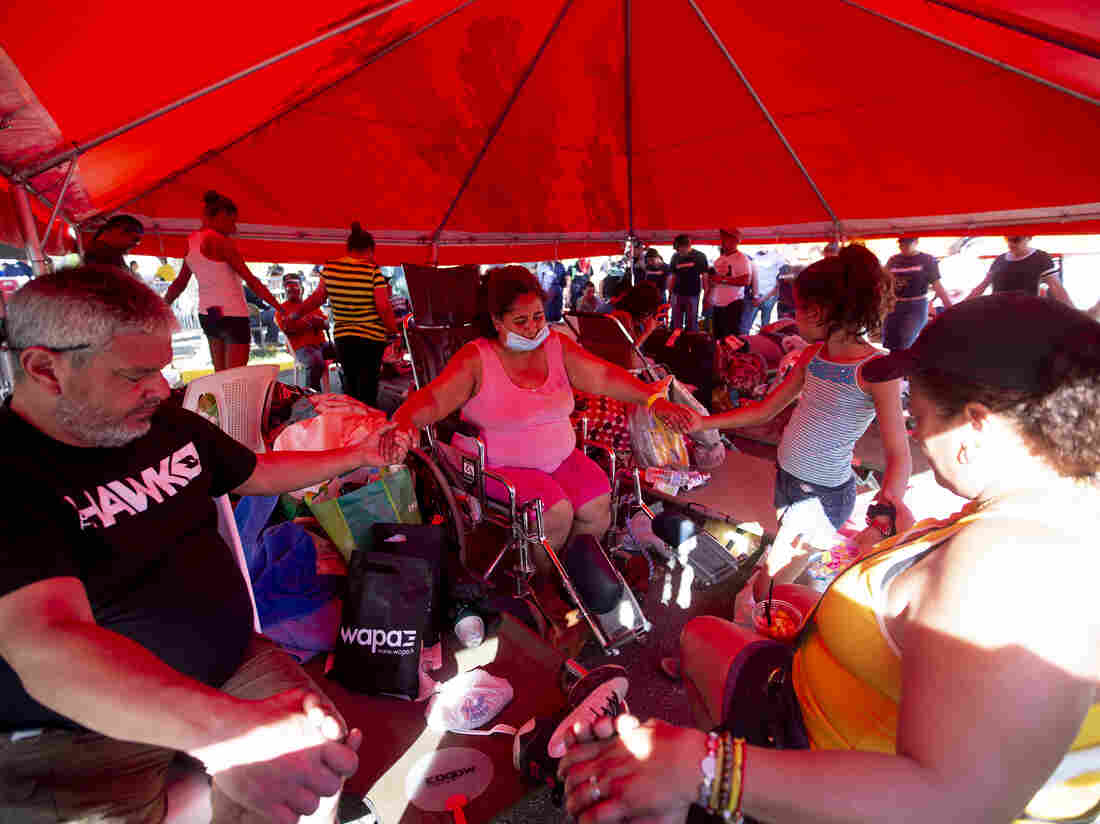 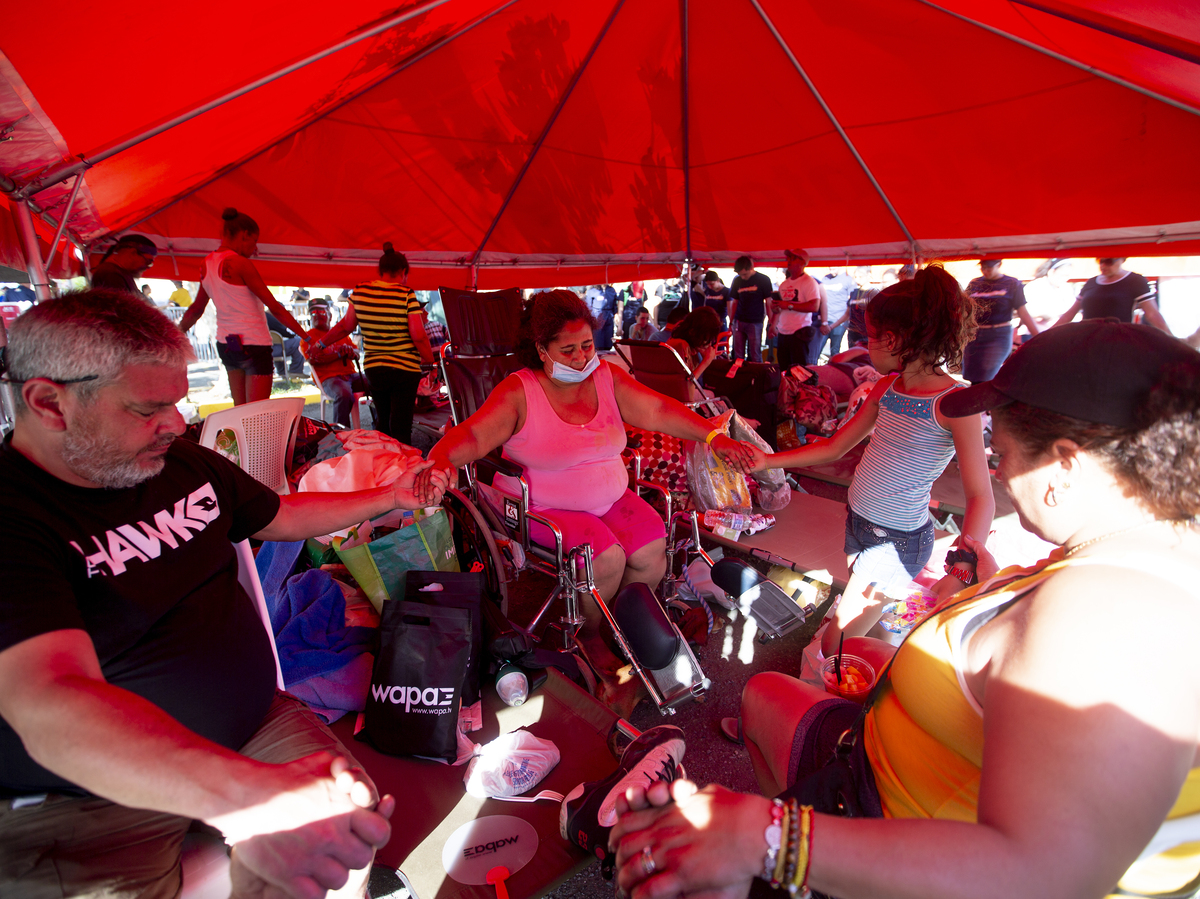 Wanda Santana, center, prays along members of her family at the makeshift camp located at the Mariano Rodríguez Coliseum in Guanica, Puerto Rico.

As NPR reported last week, Direct Relief, a humanitarian group, estimated 2,000 people were displaced by the quake. The Associated Press, citing local officials, estimates the number of people "left homeless by a series of quakes" is nearly 5,000.

She said the Puerto Rican government was immediately releasing $2 million to six of the hardest-hit areas, as well as putting price freezes on food stuffs and other products, according to USA Today.

Puerto Rico has a history of earthquakes, just not big ones

Puerto Rico sits on the edge of where the Caribbean and North American tectonic plates converge. Boundaries like these are where most of Earth's quakes occur.

"Puerto Rico is on an active plate boundary, which means that it is a seismically active area," said Wendy Bohon, an earthquake geologist at Incorporated Research Institutions for Seismology or IRIS.

She points out most quakes to hit Puerto Rico are small. The last catastrophic earthquake was more than a century ago. That quake along with the tsunami it triggered killed 116 people, according to the Puerto Rico Seismic Network, which cites a 1992 study estimating the 1918 quake was a magnitude 7.3.

First, the ongoing recovery from Maria can't be overstated. Beyond that she said the quakes around the island have been "shallow," meaning they are felt more by people.

Lastly, she said the island experienced something that rarely happens when it comes to earthquakes – a foreshock. 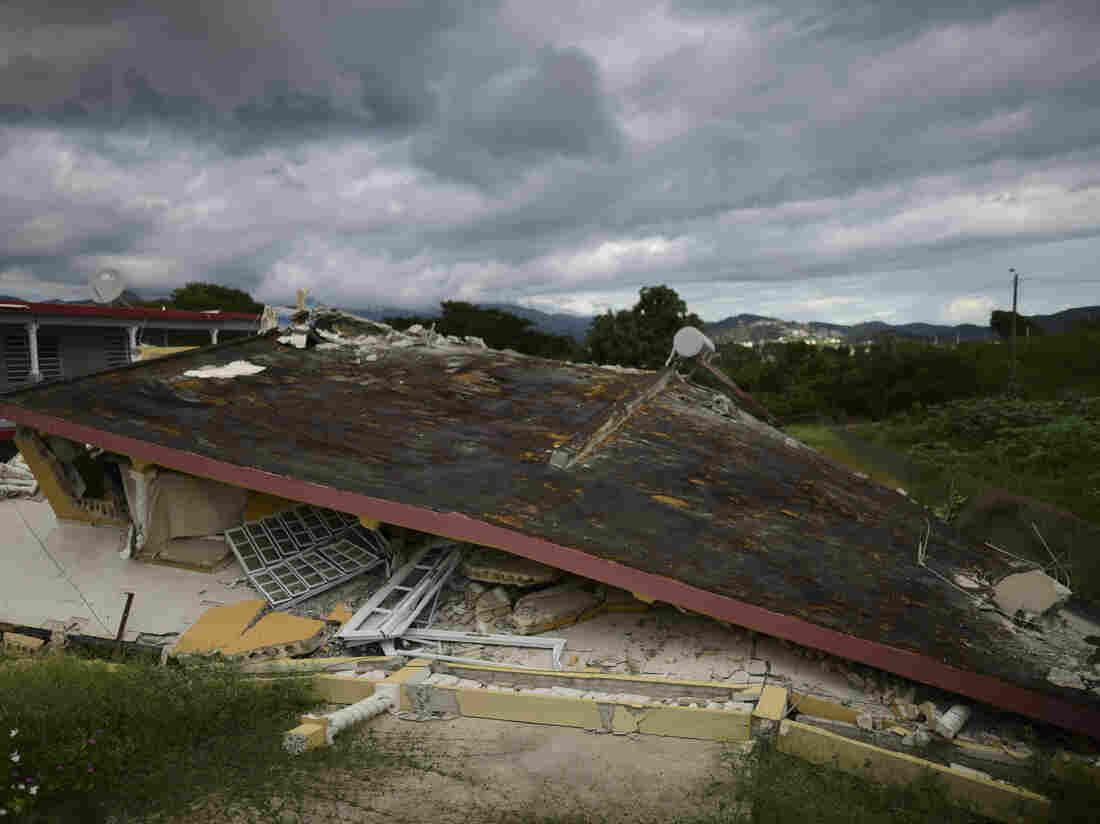 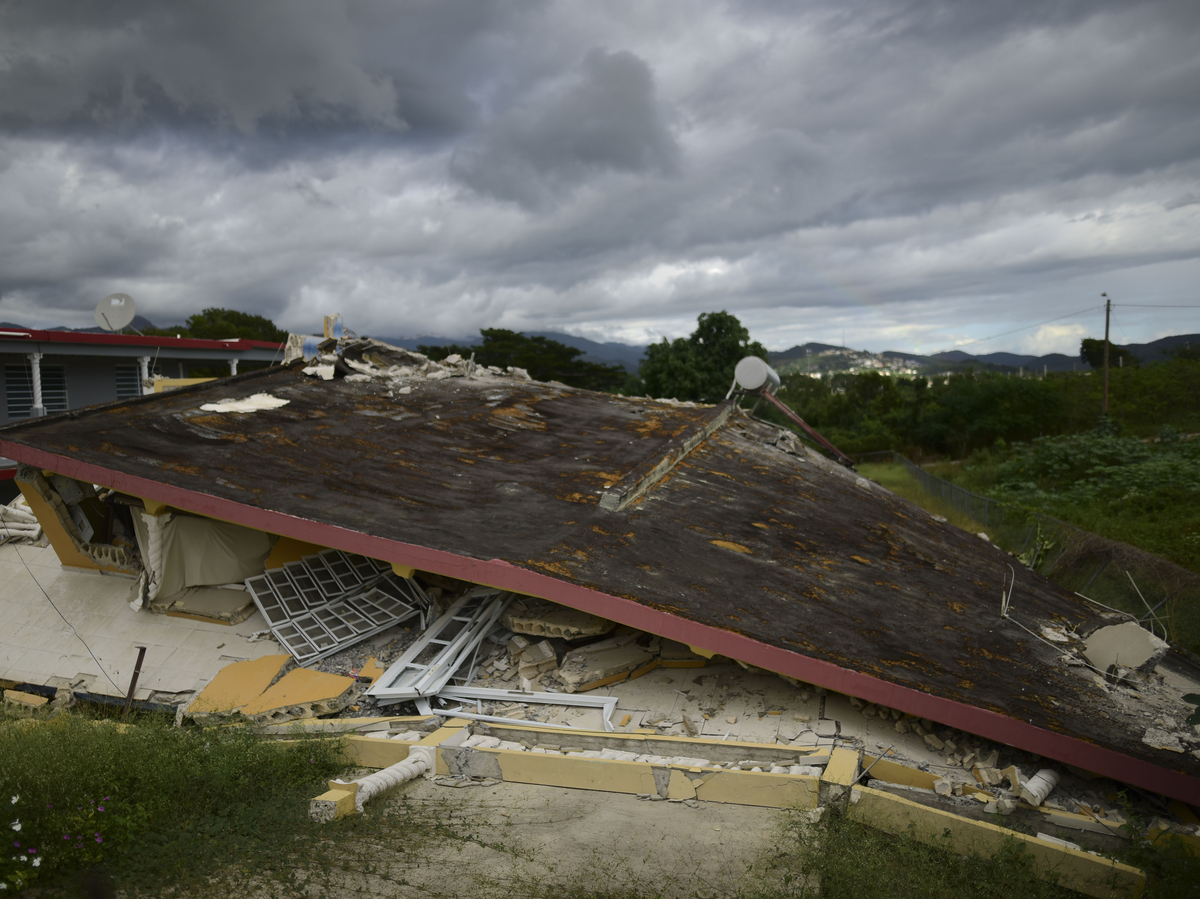 The U.S. Geological Survey defines foreshock as "an earthquake will be followed within 3 days by a large earthquake nearby." Worldwide, the probability of that occurring is just 6%, according to the USGS.

"The psychological damage of having to live through felt earthquakes for days and days and not knowing what's coming next is difficult to know how to protect your family," Bohon said.

The USGS said since a magnitude 4.7 quake hit Puerto Rico on Dec. 28, there have been more than 500 temblors in the region registering 2.0 or higher. More than 30 of those quakes registered greater than 4.0 magnitude, including the 6.4 quake on Jan. 7 the USGS said.

According to its latest forecast, there are three possible scenarios for the island's "earthquake sequence" over the next month.

It gives a 21% chance for a quake as large as last week's 6.4 magnitude to occur. A more likely scenario, it said, is that "aftershocks will continue to decrease in frequency over the next 30 days" which USGS says has a 76% chance of happening.

While unlikely, the organization said, "Recent earthquakes could trigger an earthquake significantly larger" than last week's. But it puts that scenario at a slim 3%.