Accessibility links
U.S. Citizen Moustafa Kassem Dies In Egyptian Prison, State Department Says Moustafa Kassem, who sold auto parts in New York, was arrested amid a massive crackdown in Egypt in 2013. He had been on hunger strike for more than a year at the time of his death. 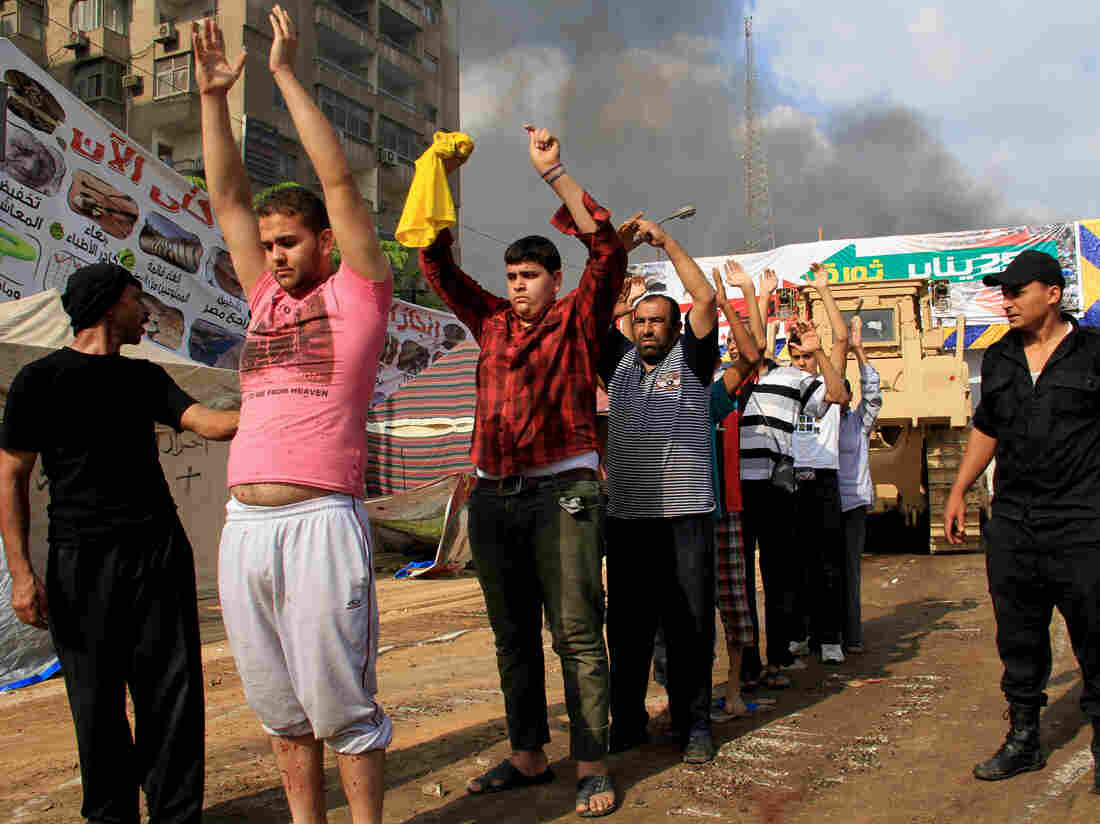 U.S. citizen Moustafa Kassem was arrested amid a massive crackdown on sit-ins in Cairo in Aug. 2013. Police are shown arresting men as they clear a sit-in by supporters of ousted Islamist President Mohammed Morsi. Ahmed Gomaa/AP hide caption 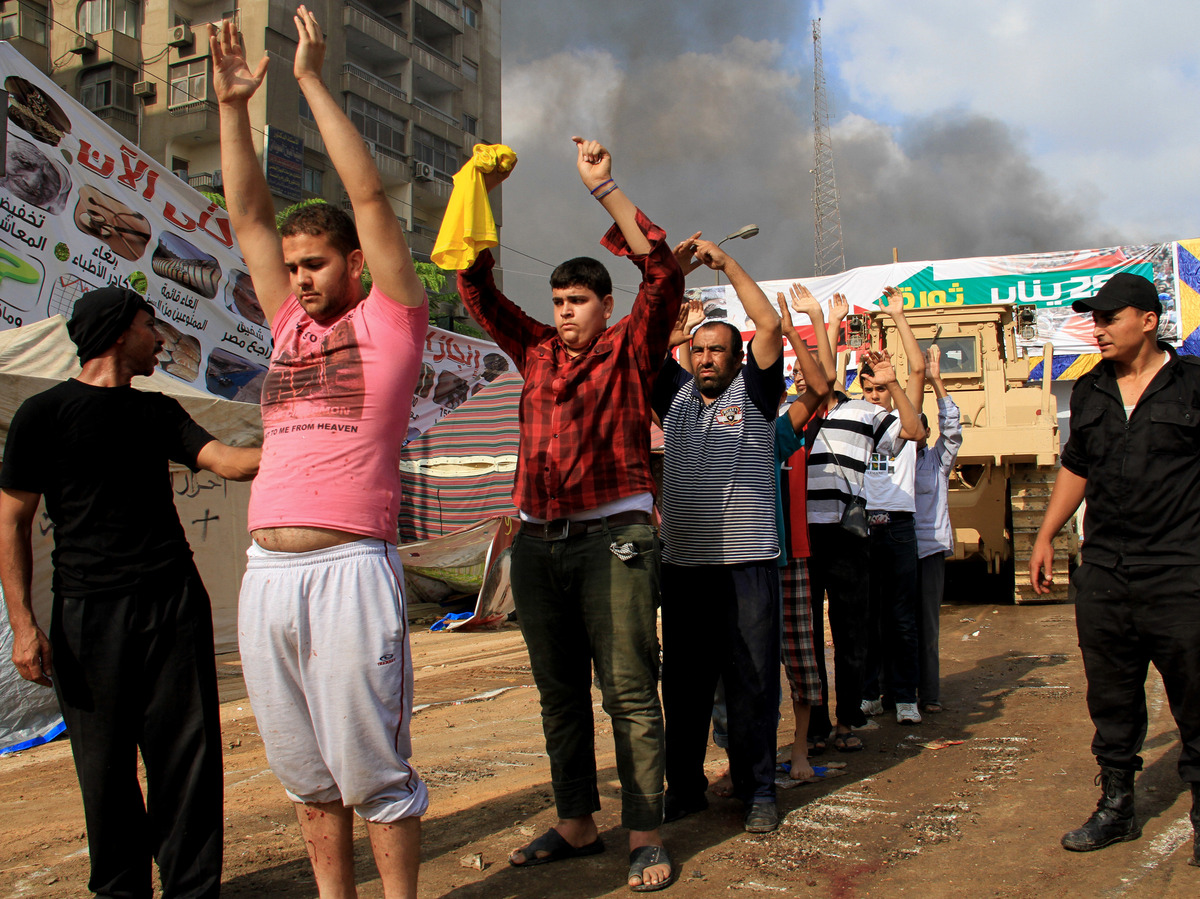 U.S. citizen Moustafa Kassem was arrested amid a massive crackdown on sit-ins in Cairo in Aug. 2013. Police are shown arresting men as they clear a sit-in by supporters of ousted Islamist President Mohammed Morsi.

A U.S. citizen who was arrested in Egypt amid political chaos there in 2013 has died in Egyptian prison, according to a State Department official and the man's lawyers.

Assistant Secretary for Near Eastern Affairs David Schenker confirmed Moustafa Kassem's death to reporters at a briefing, describing it as "needless, tragic and avoidable."

According to a statement from Kassem's lawyers at Pretrial Rights International, he died after a hunger strike that lasted more than a year. Last Thursday, he stopped taking liquids, his lawyers said.

Kassem is originally from Egypt but had emigrated to New York, where he worked selling auto parts. In the summer of 2013, he traveled back to visit family.

That summer, Egypt's military ousted then-President Mohammed Morsi, who hailed from the Muslim Brotherhood. Morsi had been democratically elected a year prior but was deeply unpopular with the wider Egyptian public. In August 2013, the military forcibly dispersed two large sit-ins of Morsi's supporters, and rights groups say hundreds of people were killed.

Kassem's lawyers say he happened to be changing money at a shopping center near the sit-in when he was stopped by Egypt military officials.

"After showing his US passport, the soldiers beat and detained him, later transferring him to law enforcement officials who continued this harsh treatment," the lawyers' statement reads. "A diabetic with a heart condition, prison officials limited access to necessary medications and medical care for the entirety of his detention."

After more than five years of pretrial detention, Kassem was convicted and sentenced to 15 years in jail in a mass trial involving hundreds of defendants in 2018. The mass trial was "of people accused of murder and inciting violence," according to Reuters. Kassem was found guilty of participating in a protest, although his lawyers say "no individualized evidence was ever presented against him."

Kassem's brother-in-law Mustafa Ahmed, who was with him at the time of his arrest, describes dire detention conditions. "The cells are filthy, infested with insects, rodents and snakes," he wrote in an op-ed in The New York Times last year. "They have no ventilation, sun or light. Moustafa and other prisoners have no access to clean water, a bed, a chair or any books."

Major Crackdown In Egypt Sweeps Up Activists, Children — And At Least 1 U.S. Citizen

Ahmed says his relative felt strongly about going on hunger strike. "I know I may be able to survive for only a few weeks when I go on hunger strike," Kassem is quoted as saying by Ahmed. "But I have no other option. I would rather starve to death than rot slowly and silently here in this hell."

Mohamed Soltan, another U.S. citizen who was detained in the same crackdown in Egypt, was at the same prison with Kassem before he was released in 2015. Now, he advocates for other political prisoners in Egypt.

"He was at the wrong place at the wrong time," Soltan told NPR's Michele Kelemen. "He's not politicized at all."

He said Kassem's family is now devastated. As Kassem's sister and brother were on their way to Egypt after his death, Soltan adds, "they learned that the security forces were forcing the family to bury him very, very quickly, literally in the middle of the night at 2:00 a.m. — not even giving the chance for family members that are abroad to see his body and be there and have a proper funeral."

Soltan urged the Trump administration to "do more" to bring U.S. citizens home who are imprisoned overseas. "We need to bring these Americans home."