Accessibility links
Review: 'How To Speak Boy,' By Tiana Smith Fans of You've Got Mail will find a lot to love in Tiana Smith's tale of a high-achieving high-schooler who gets distracted by a correspondence with another student whose identity is a mystery.

Love By The Letters In 'How To Speak Boy'

Love By The Letters In 'How To Speak Boy' 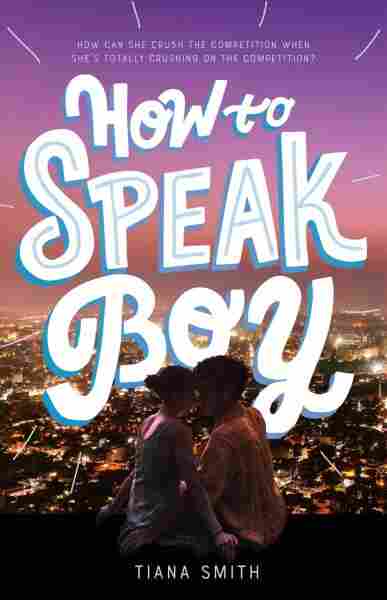 How to Speak Boy

The holiday season that You've Got Mail was released, I saw it in the theater with my grandmother. Now that she's gone, I rewatch the silly, heartwarming Tom Hanks/Meg Ryan classic every year right around this time. Tiana Smith's How to Speak Boy was absolutely the perfect book to dovetail right into my tradition.

The story opens with the announcement that 17-year-old Quinn Edwards has been named co-captain of her high school's speech and debate team. Her partner in captainship is tall, dark and handsome Grayson Hawks, charismatic well-to-do hipster geek and Quinn's long-time nemesis. He's also her biggest rival, as Quinn and Grayson both compete in the Original Oratory category. To make matters worse, Quinn's best friend Carter has also shifted to Oratory and — is he flirting with her? Quinn doesn't have time for boyfriends. It's hard enough for her to focus, what with her new responsibilities, upcoming competitions, and her steadily declining grade in AP Government.

Quinn thinks things are looking up for half a second — at least in AP Government — before she realizes that she's received the wrong student's test results in her cubby. She returns the test to its correct place, along with a note signed with only her student number (15511) — and the mystery student (number 15211) responds. Thus begins a flurry of anonymous note-flirting. Quinn chooses not to investigate 15211's true identity because she's so enchanted by the idea of who this boy might be — a dangerous game, as some people certainly look better on paper.

'Crying Laughing' Will Have You Doing Both

I wish the book had touched more on the aspect of handwriting itself, as that act becomes less and less popular with Teens Who Text. There is a certain intimacy that comes with the written word. Once upon a time, the passing of notes in school was an art form in and of itself, involving everything from colored inks, doodles and dynamic text to origami. The notes swapped in How to Speak Boy are simply presented in a different font from the story's text, and I feel like Smith has missed an opportunity to give them a little something more.

Quinn is an incredibly hardworking student and a very calculating character. Her moves are very often overthought, driven by design instead of emotion; she has a tendency to make choices in direct opposition to what she's feeling. As a reader I found myself caught off guard a few times by what came out of Quinn's mouth, when the story lead me to believe she would be taking another direction. This quirky unpredictability is surprising and frustrating for the reader — and for Grayson and Carter.

The enemies-to-lovers story is a classic, and 'How to Speak Boy' honors that tradition with charm and humor.

While Grayson overtly plays with Quinn's heartstrings — and Carter becomes the bestie-with-an-unrequited crush, a la Duckie from Pretty in Pink, their speech and debate coach steps up as the voice of wisdom, reminding Quinn to keep her head in the game. Will 15211 turn out to be Grayson or Carter? Fans of You've Got Mail will be delighted by how this book unfolds, but its eventual outcome will not be a bolt from the blue.

One downside to the film is that the audience doesn't get to see what happens beyond the reveal of the letter writer. Not only does Tiana Smith give her readers more content beyond that moment, I was pretty shocked by the outcome. But I was also gratified, as I felt the additions made the story much more satisfying. The enemies-to-lovers story is a classic, and How to Speak Boy honors that tradition with charm and humor.