Accessibility links
The 2019 NPR Music Jazz Critics Poll The results of the year-end poll of 140 jazz critics offered surprise after surprise, including what's likely the youngest group of musicians, and more women than ever, in the top 10. 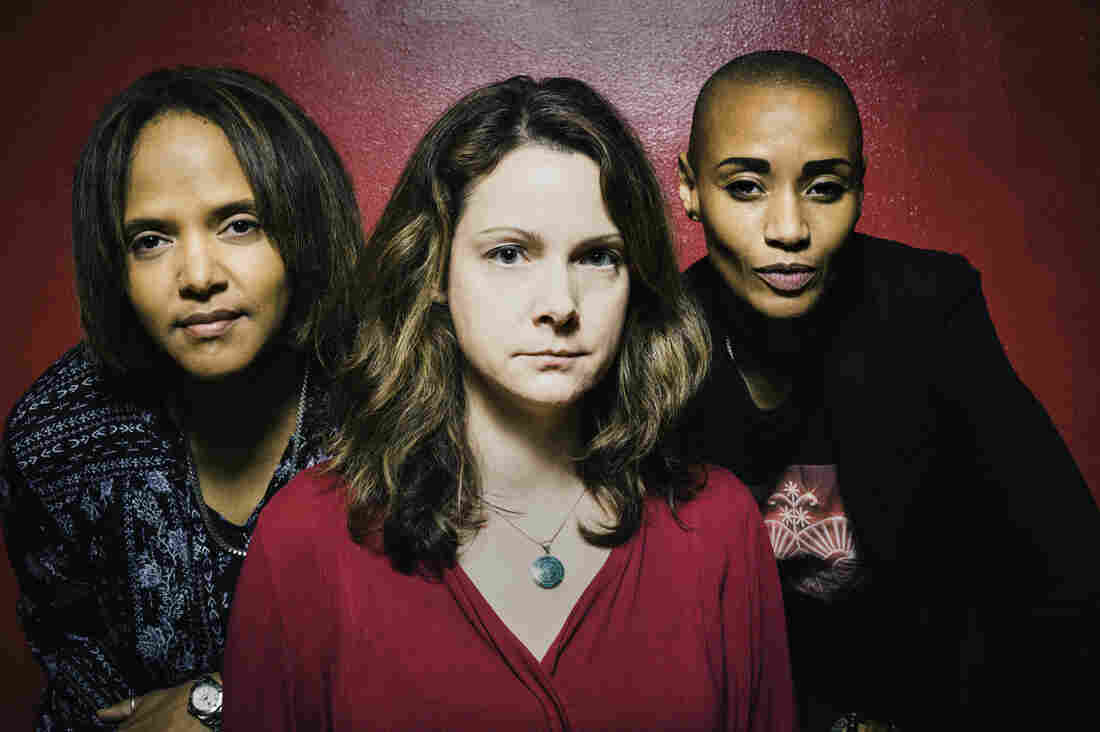 Diatom Ribbons, by Kris Davis (center) was selected as the No. 1 jazz album of 2019 in a poll of 140 critics. Davis' album includes contributions from a wide range of musicians, including Terri Lyne Carrington (left) and Val Jeanty (right). Caroline Mardok/Courtesy of the artist hide caption 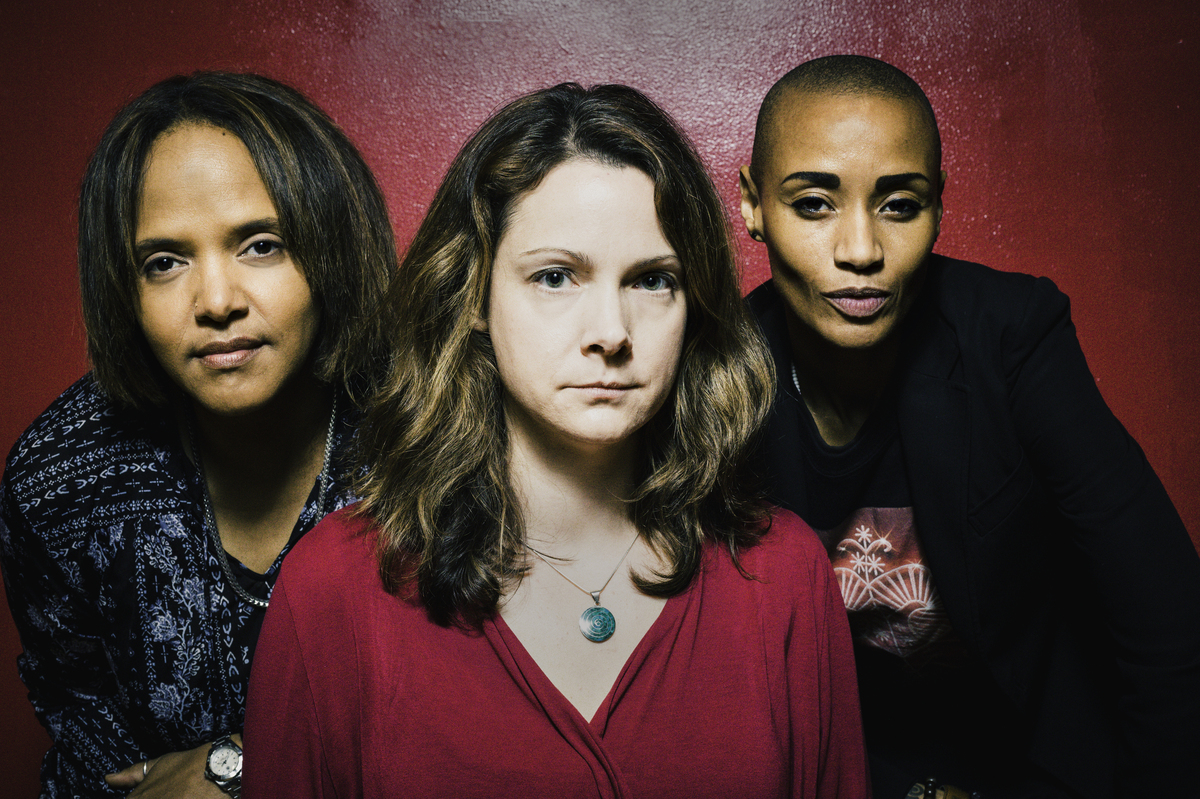 Diatom Ribbons, by Kris Davis (center) was selected as the No. 1 jazz album of 2019 in a poll of 140 critics. Davis' album includes contributions from a wide range of musicians, including Terri Lyne Carrington (left) and Val Jeanty (right).

Caroline Mardok/Courtesy of the artist

Below are the results of NPR Music's 7th Annual Jazz Critics Poll (my 14th, going back to the poll's beginnings in the Village Voice). 2019's results provided surprise after surprise. The only predictable winner was in Latin Jazz: Miguel Zenon's Sonero, the alto saxophonist's fifth victory in this category. But Eric Dolphy's Musical Prophet: The Expanded 1963 New York Studio Sessions upset a "new" John Coltrane album in Reissue/Discovery. Relative newcomer Jazzmeia Horn's Love and Liberation won in Vocal. The winner in Debut is annually a newcomer, of course, and in 2019 this was Joel Ross, for KingMaker. But the biggest surprises of all were in the voting for Album of the Year, with an unprecedented five women in the Top 10, all for the first time, and Kris Davis finishing on top, for her self-released Diatom Ribbons.

In The 2019 NPR Jazz Critics Poll, The Fringe Fills the Gap

We're repeating an experiment we introduced last year. You'll again find a capsule review of each album in the Top 10, but instead of me doing all the heavy lifting, we've asked a critic who voted for that album to weigh in. The same with the top finisher in Vocal, Debut, Latin and Rara Avis. And as a bonus, we've added a few capsules about solitary No. 1s: albums appearing only on a single ballot, but as that critic's top pick.

Including my own choices and analysis, and the individual ballots of all 140 participants, there should be enough here to keep you reading — and listening — for the next 12 months. —Francis Davis

At a glance, an odd candidate for consensus: Kris Davis, an improviser-composer with the instinct of an alchemist, made Diatom Ribbons by drawing inspiration from oceanic microbiology, tectonic movement and piano precursors ranging from Messiaen to Monk to Cecil Taylor. What makes her experiment feel seamless is the deep cohesion of some elite company: a core trio with Val Jeanty on turntables and Terri Lyne Carrington on drums, opening up to the earthy enlightenment of a pair of hardy tenor saxophonists (Tony Malaby, JD Allen) a couple of spark plug guitarists (Marc Ribot, Nels Cline), and a handful of others (like Esperanza Spalding, in two arresting vocal cameos). It easily could have felt like an Event album, but Davis and her wrecking crew produce something rarer: an album of volatile heat and fractured funk that mysteriously forms an alluring contour line. —Nate Chinen

In an age when colleges produce "factory lines" of instrumentalists that end up sounding the same, the Art Ensemble of Chicago continues to remain a singular "university of music." We Are On The Edge, a testament to this, marks the ensemble's 50th anniversary. Founding fathers Roscoe Mitchell and Famoudou Don Moye, inspiring next-generation musicians like Nicole Mitchell and Tomeka Reid, recreate their eloquent palimpsest of modern American blackness, to remain "ancient to the future." —Raul da Gama

The cello, in jazz, has always taken a back seat to the double bass. While Ray Brown, Oscar Pettiford and Ron Carter have certainly helped move the instrument forward, Akua Dixon made "jazz cello" a stand-alone category, as a founding member of the Max Roach Double Quartet and with her group Quartette Indigo. Now 20 years into the new millennium, with Old New, Tomeka Reid has firmly positioned the cello in its rightful place — out in front. On songs like "Niki's Bop," as the D.C. native engenders the vision of AACM, underscored by the syncopated rhythms of the DMV, she relishes a kind of unbridled freedom, perhaps one not fully enjoyed by her predecessors. —Shannon Effinger

4. Branford Marsalis Quartet
The Secret Between the Shadow and the Soul (Okeh)
Points: 138.5
Votes: 23

The Branford Marsalis Quartet has been working toward this record for years — a beautifully paced journey of expressive form, variegated texture, spontaneous storytelling and generous feeling delivered with the intense clarity of a working band. Joey Calderazzo and Eric Revis have been on board since 1997-98, Justin Faulkner since 2009. Gestural abstraction, rubato melody, modern swing, fresh originals, post-bop covers (Hill and Jarrett) — the band breathes as one, animating the tradition in the present tense. —Mark Stryker

The alto saxophonist extends his string of boundary-pushing albums by rediscovering the middle ground between his trio and the larger groups he has lately favored. Matt Brewer (bass) and Damion Reid return from his Dialect Fluorescent trio, while pianist Taborn harmonizes, comps, disrupts and waxes eloquent. Could be his most conventional post-bop effort, but that's only because he's pushed the envelope so far with such complete command. —Tom Hull

Over the last decade, saxophonist/flutist Anna Webber has made a habit of deploying compositional techniques more common in new music than jazz — whether translating raw data into pitch sequences or building melodies from random electronic tones — but her deep grasp on rhythm, timbre and space has allowed those excursions to swing. She's achieved an apotheosis with Clockwise, looking to the work of Xenakis, Cage, Varese, Feldman, Stockhausen and Babbitt for inspiration, deftly analyzing specific fragments of their music to build something new and elusive. Leading an agile, imaginative septet she makes heady music appeal to the rest of the body. —Peter Margasak

This is the best kind of sequel, adhering to the creative vision of Branch's 2017 Fly or Die while expanding its scope and showing a path forward. Her horn slashes as fiercely as ever, and she's added a new weapon to her arsenal: her voice. Raw with sorrow, fear and rage, she chants a "prayer for amerikkka," a stark graveyard blues that's part Charles Mingus, part Julius Hemphill and thrillingly new at the same time. —Phil Freeman

How do you compose a manifesto to ambiguity? Who would even dare? Well, the inspired Taylor Ho Bynum has. "For me, creativity doesn't come from dogmas," he said about his new album, "it comes from questioning yourself and questioning your assumptions." With a nonet (or, rather, "9-Tette") that includes other young-ish visionary all-stars — Halvorson, Reid, Fujiwara, Laubrock — plus knowing vets like bassist Ken Filiano and Bill Lowe, Bynum's music is filled with glorious contradictions: composed and free; earnest and rollicking and, to paraphrase the late, great Lester Bowie, serious and fun. —Michael J. Agovino

Anthony Braxton, GTM (Syntax) 2017 (New Braxton House)
We know we're not supposed to sort albums into "jazz" or "classical" piles when it comes to artists who have described their work as "creative music." But listeners do it anyway. (Genre-based thinking dies hard.) In the case of Anthony Braxton, the "jazz" choice in 2019 might seem obvious, since the four-disc Quartet (New Haven) 2014 offers generous helpings of his saxophone improvisations.

But for me, this artist's most profound statement of the year was an even larger set titled GTM (Syntax) 2017. Here, a 12-person choir takes a deep dive into his "Ghost Trance Music" pieces. You could just as easily include it in a "classical recordings" list. Though the way these vocalists — many of them veterans from the composer's opera productions — improvise and blend motifs from other Braxton pieces sheds new light on prior albums that have entered the jazz canon, like "Quartet (London) 1985." —Seth Colter Walls

Ran Blake and Jeanne Lee, The Newest Sound You Never Heard 1966-67 (A-Side)
A worthy reason to include a release on a year-end list is because it is not easy to find a copy, but would be on more lists if it was. The Newest Sound You Never Heard flows like a passionate, elegant, ageless dream spun by a captivating pair of creators. And it prompted to top two or three concerts I heard in 2019. —Milo Miles

FKJ, Live @ Salar De Uyuni for Cercle (self-released)
FKJ (short for French Kiwi Juice, born Vincent Fenton) deeply draws from jazz, yet is more widely celebrated in the EDM world, as his vast online following indicates. His highly-improvised, blues-inflected (and near miraculous) solo masterpiece at Salar de Uyuni, captured high in the Andes, can only be found on YouTube and Facebook. And as such, it reflects — pun intended — the dramatic change in the way we consume music today, which shouldn't be limited to album-only releases considered for a year-end poll. —Simon Rentner

Binker Golding, Abstractions of Reality Past & Incredible Feathers (Gearbox)
Combining the breezy intricacy and silken tone of Michael Brecker with a hip-hop inflected swing, London saxophonist Binker Golding's debut album is an accomplished yet understated paean to the quartet form and all its radical possibilities. From the skewed balladry of "...And I Like Your Feathers" to the infectious melody of "You, That Place, That Time," Golding's quartet flows with immense improvisatory energy. —Ammar Kalia

Mary Halvorson/John Dieterich, A Tangle of Stars (New Amsterdam)
Avant-jazzer Halvorson meshes smartly with alt-rocker Dieterich (of the band Deerhoof) on this electronically enhanced guitar duet session. The two find a common wavelength, echoing each other, completing each other's phrases or vamping in tandem. Spiky, spacey, quirky, jangly, noisy, at times mellifluous, the music is staunchly original, engaging even at its most abstract. —Larry Birnbaum

Jeff Williams, Bloom (Whirlwind)
Free-bop is a cake-and-eat-it-too situation, where the buoyancy of swing gooses the ingenuity of exploration. This year it found a sweet spot in these 11 quizzical roundabouts. Drummer Jeff Williams, bassist Michael Formanek and pianist Carmen Staaf fleck the music with micro tensions while fully genuflecting to melody. Allure dominates the informality they fashion, their attractive improvs managing to be both heady and charming. —Jim Macnie

While much of the material on the lovely packaged box set Musical Prophet has been previously available, not until now has the music sounded this crisp and rich. From the fiery "Burning Spear" from Iron Man, to the gorgeous, previously unreleased bass clarinet and arco bass duet "Muses for Richard Davis", these 1963 sessions further highlight the imaginative, musical genius of Dolphy, who died much too young the following year. — Chris Monsen

Love and Liberation is a fresh collection of jazz ballads that showcases Jazzmeia Horn's outstandingly silky voice. Her vocal and lyrical gifts permeate her album, whether she is reciting smooth rhythmic poetry or singing to the caliber of greats like Billie Holiday and Ella Fitzgerald. Love and Liberation is a pleasurable mesh of nostalgic stylings and a modern, neo-soulful exhibition full of grace and class. —Jordannah Elizabeth

KingMaker announces Joel Ross as a crown prince of jazz. From the gorgeous first moments of the vibraphonist's debut, he demonstrates as much promise as a band leader and composer as he's already proven as a sideman for artists like Makaya McCraven. The record is harmonically rich and rhythmically elaborate, but still swinging and pretty enough to go down easily. While Ross's playing shines, he is mature enough to share attention with bandmates, especially saxophonist Immanuel Wilkins. —David A. Graham

Zenon's well-established quartet puts listeners in the eye of a storm — the relatively calm vantage point where we can marvel at the powerful currents of sound around us. On Sonero, the deservedly acclaimed alto saxophonist turns to a cultural touchstone of his native Puerto Rico — the pioneering and influential salsa singer Ismael Rivera — and radically complicates his classic hits while retaining the essence of their crowd-pleasing appeal. —Neil Tesser