Accessibility links
Iran Makes Arrests Over Downing Of Ukrainian Airliner, And A New Video Emerges The move comes as Iranians continue to protest against the government over the tragedy. An Iranian judiciary spokesman says "a number of individuals have been arrested." 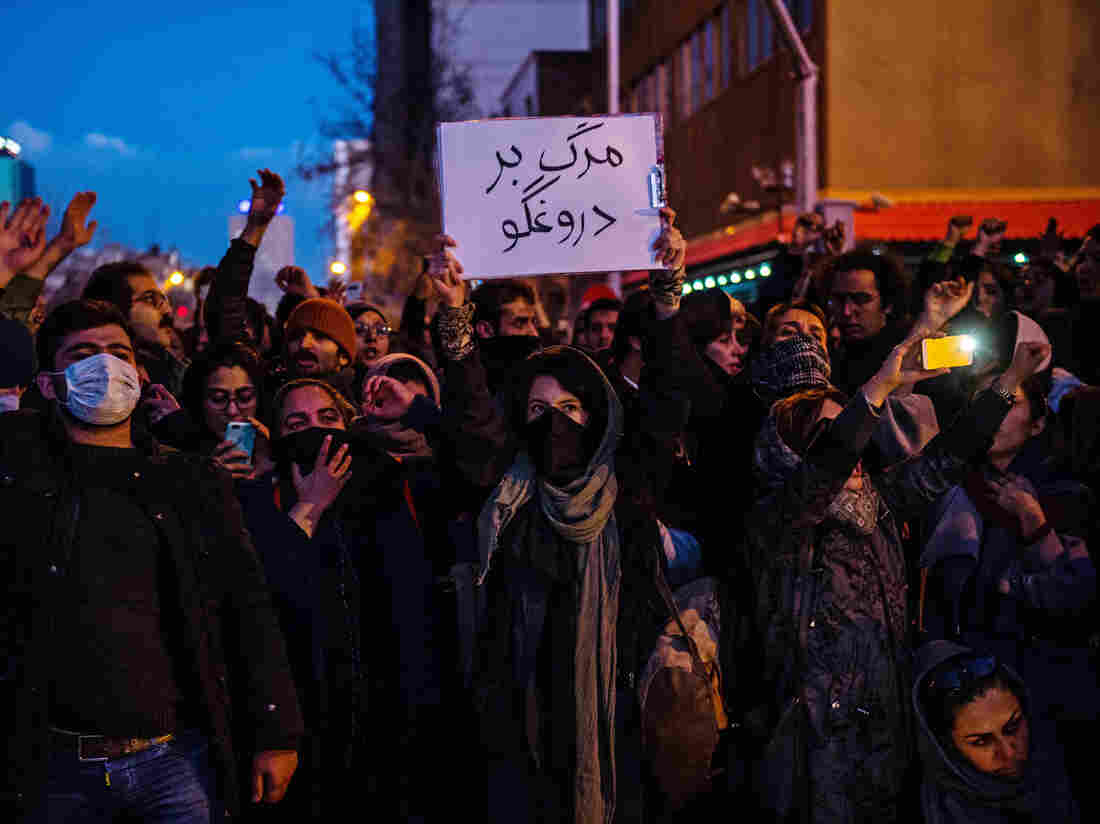 Mourners chant while gathering in Tehran over the weekend for a vigil for victims of Iran's unintentional downing of a Ukrainian airliner. As protests continue, Iran says it has made several arrests in the catastrophe. Bloomberg/via Getty Images hide caption 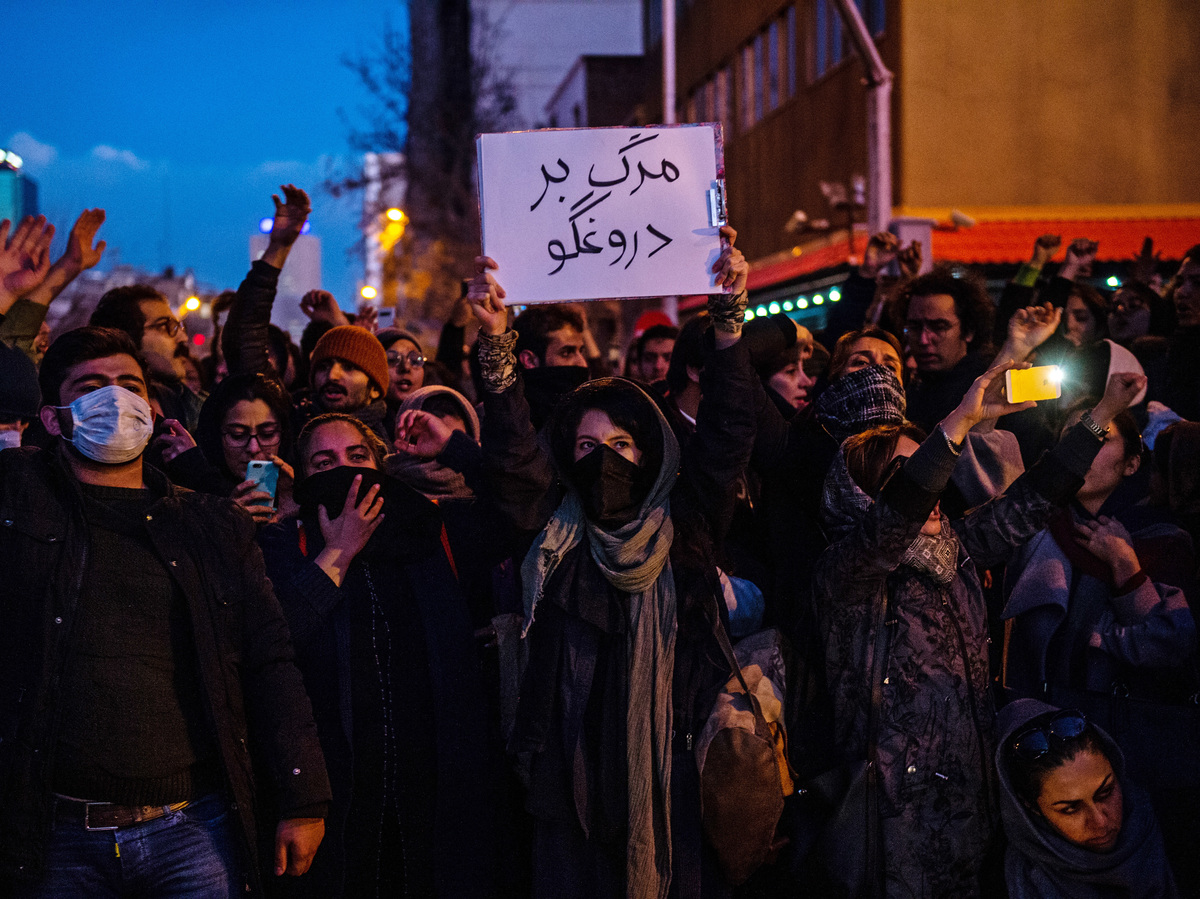 Mourners chant while gathering in Tehran over the weekend for a vigil for victims of Iran's unintentional downing of a Ukrainian airliner. As protests continue, Iran says it has made several arrests in the catastrophe.

Iranian authorities have arrested an undisclosed number of people over the accidental shootdown of a Ukrainian airliner. The move comes as Iranians continue to protest against the government over the tragedy. Hours after the arrests, a new video emerged that purportedly shows two missiles hitting the passenger jet.

"Thorough investigations have been launched and a number of individuals have been arrested," Iranian judiciary spokesman Gholamhossein Esmaili said according to Iran's Press TV, citing an official statement on the agency's website.

After initially denying responsibility for the deadly crash, Iran admitted its missiles took down the jet after several videos showed the airliner being struck by an object and falling in flames. On Tuesday, new footage was published by The New York Times that suggests Iran's military may have fired two missiles at the passenger jet.

That roughly two-minute video, taken from a surveillance camera, shows what looks to be a missile being launched and hitting its target — and then, nearly 30 seconds later, a second missile is launched and causes another explosion. The plane then remains airborne for well over a minute, including a shocking moment when it is enveloped by a fireball.

Earlier Tuesday, President Hassan Rouhani called for the judiciary to set up a special court to hold a full accounting of the disaster, which killed 176 people and triggered public outrage in Iran and other affected countries.

News of the arrests comes days after Iran acknowledged that human error in its military's defense systems had caused what Rouhani deemed a "great tragedy & unforgivable mistake" in shooting down the civilian airliner shortly after it took off from Tehran.

For days after Ukraine International Airlines Flight 752 was violently brought down last Wednesday, Iran denied that its military may have played a role, even as the catastrophe's timing — just after Iran launched missiles at U.S. assets in Iraq — immediately raised suspicions that the jet had been targeted by mistake. Iran's missile strike was in retaliation for the U.S. killing Iranian military commander Qassem Soleimani in Baghdad.

'Left With No Choice,' Europeans Open Dispute Against Iran For Violating Nuclear Deal

As Rouhani called on the judiciary to dedicate a special court to the inquiry, he said Iran owes a debt of responsibility to those who died. The plane had been carrying 82 Iranians, 57 Canadians and a number of other foreign nationals. Many of them had dual citizenship.

"This is not an ordinary case. The entire world will monitor the proposed court," Rouhani said, according to The Tehran Times. He added, "I myself, due to my somehow knowledge about air defense issue, say that only one person can't be guilty in this adventure, so there are some others. I want (the relevant bodies) to explain the issue honestly to the people."

In the days since the plane was shot down, Iranians have been taking to the streets — at first to mourn the victims, but then to vent their fury over the government's handling of the tragedy.

"Demonstrations that had been attacking the U.S. for killing Iran's top general quickly turned into calls of 'death to the dictator,' a reference to Supreme Leader Ayatollah Ali Khamenei," as NPR's Peter Kenyon reported in the wake of the government's shifting narrative about the crash.

Government security forces appeared to use live ammunition against some of those protesters, according to videos that were released by a human rights group Monday. Officials later denied that allegation.

State media just announced that Ayatollah Khamenei is due to deliver the sermon at this Friday’s prayers. He has not spoken at Friday prayers for 8 years. He only speaks at this ceremony during critical times.

In a reflection of the critical time in which Iran now finds itself, the country's supreme leader, Ayatollah Ali Khamenei, will take the rare step of delivering a Friday prayers sermon this week — something he hasn't done in eight years, according to Ali Arouzi, NBC News' bureau chief in Tehran.