Accessibility links
Elizabeth Warren Has A Plan To Cancel Student Loans Without Congress A little-known provision allows the U.S. education secretary to erase student loan debt without going to Congress. Elizabeth Warren says if elected president she would put that provision to use. 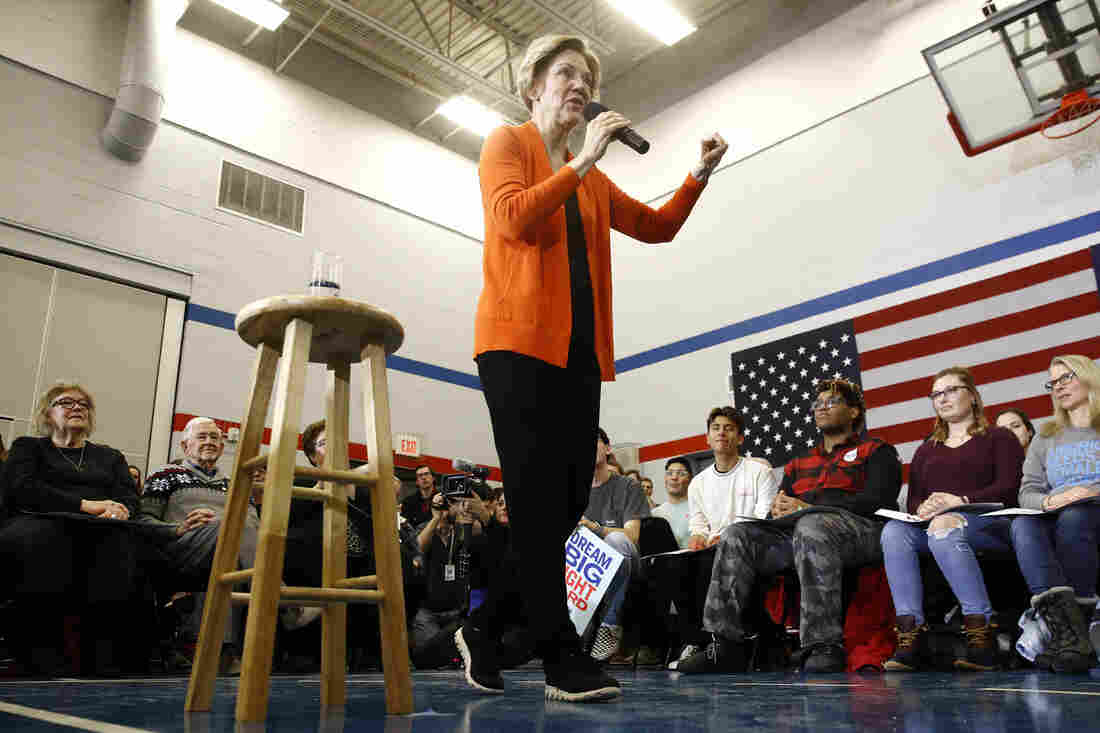 Elizabeth Warren says if elected president, she would use a little-known provision that allows the U.S. education secretary to erase student loan debt without going to Congress. Patrick Semansky/AP hide caption 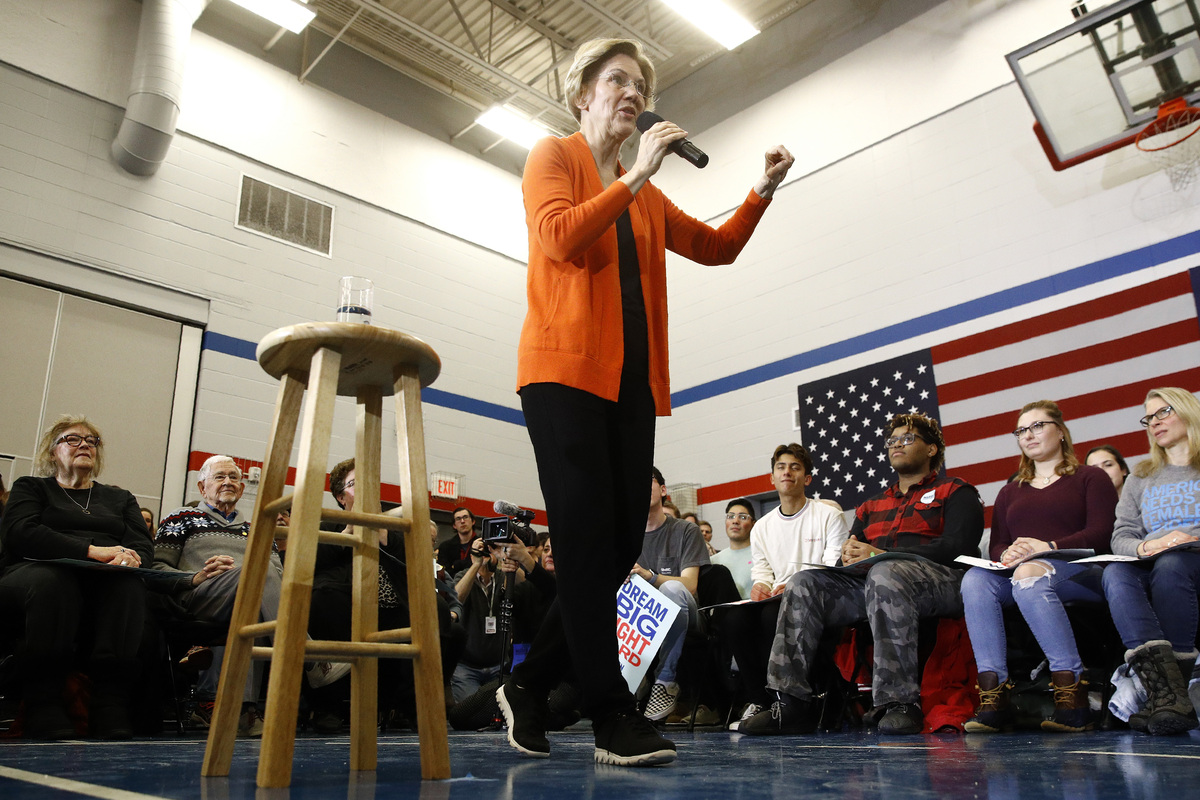 Elizabeth Warren says if elected president, she would use a little-known provision that allows the U.S. education secretary to erase student loan debt without going to Congress.

Sen. Elizabeth Warren, D-Mass., has pledged to cancel up to $50,000 of debt for 95% of student loan borrowers if she is elected president. Sen. Bernie Sanders, I-Vt., has proposed an even more generous plan if he's elected.

Both are bold, controversial pitches that would have a hard time making it through a divided Congress. But on Tuesday, Warren announced she would use a little-known shortcut and wouldn't need Congress. As president, she says, she could cancel the debts of tens of millions of student borrowers all on her own.

It turns out, she's probably right.

"Our country's experiment with debt-financed education went terribly wrong," Warren wrote in a statement. "Instead of getting ahead, millions of student loan borrowers are barely treading water."

About 43 million student borrowers owe the U.S. government $1.5 trillion, according to the U.S. Department of Education. And until now, the department has only offered student loan forgiveness or cancellation to borrowers who meet certain criteria.

Student Loan Borrowers With Disabilities Aren't Getting Help They Were Promised

"Maybe it's because they've been working in a public service position or because they become disabled or because they're saying that their school fundamentally cheated them," says Eileen Connor, legal director of the Project on Predatory Student Lending at the Legal Services Center of Harvard Law School.

"Those pathways exist. And I think what Sen. Warren's proposal is pointing out is that there's also this freestanding power that the secretary of education has to cancel debts, not for those reasons, but really for any reason at all."

Connor wrote an analysis that found Warren's pitch is both lawful and permissible.

But is it a good idea? That debate has been raging since last year, when Warren first unveiled her plan. One critique, from Adam Looney of the Urban-Brookings Tax Policy Center, says Warren's plan would disproportionately benefit the wealthy, with the bottom 20% of borrowers by income reaping just 4% of the savings. As such, Looney asks: "Why are those who went to college more deserving of aid than those who didn't?"

This authority may be news — and poorly understood — but it isn't remotely new. It dates back half a century, to 1958, and the U.S. government's frenzied response to the Soviet Union launching Sputnik.

Under then-President Dwight D. Eisenhower, Congress passed the National Defense Education Act, which poured federal dollars into U.S. colleges and universities — and into students' pockets — all in the name of playing academic catch-up with the Soviets.

Included in the legislation is one tightly packed sentence that says the government's appointed student loan commissioner (there was no education secretary back then) "shall have the power to agree to modifications of agreements or loans made under this title and to compromise, waive, or release any right, title, claim, or demand, however arising or acquired under this title."

Put another way: The education secretary has the same kind of discretion as a criminal prosecutor, says Luke Herrine, a lawyer and Yale Law School Ph.D. student who has studied this authority extensively. (He's also a full-throated advocate for what he calls a "student debt jubilee.")

"So in the same way that a prosecutor of criminal claims has discretion to determine whether to offer a plea deal, whether or not to pursue a case against somebody who may or may not have committed a crime, the secretary of education can determine not to enforce student debts basically for whatever reason," Herrine says.

This authority was further expanded and codified in the landmark Higher Education Act of 1965. And because Congress has already bestowed this power on the education secretary, canceling student debt does not require additional say-so from Congress.

There are a few potential roadblocks. Such a move would more than likely trigger lawsuits. It could also have tax implications. Traditionally, canceled student debt has been considered taxable income (with some exceptions), and so any effort to erase hundreds of billions of dollars in student loans would require a sympathetic reading of the tax code. Otherwise, many students with large loans but small, income-based monthly payments could face a sudden and impossible tax bill. Still, Herrine says, a new administration could almost certainly find a legal workaround, and Warren pledged in her announcement "that loan cancellation will not result in any additional tax liability for borrowers."

Perhaps the most interesting question surrounding this provision that's been hidden in plain sight is this: Why are we only now hearing about it?

Connor says she first took note of the provision — and studied it as a means to help borrowers — several years ago, when students began claiming they had been defrauded by their for-profit colleges. "Just because something has never been done before isn't an argument for never doing it," Connor says. "And it's definitely not an argument that it can't be done."

But should it be done? That's a question voters will have to answer.