Accessibility links
The 'Losing Lawyer' In Israel Who Defends Palestinians Charged With Violence Lea Tsemel, 75, has lost case after case for decades and has received death threats as a Jew representing Arabs. Her notoriety in Israel has grown since last year's release of a documentary about her.

Listen · 4:33 4:33
The 'Losing Lawyer' In Israel Who Defends Palestinians Charged With Violence 4:33 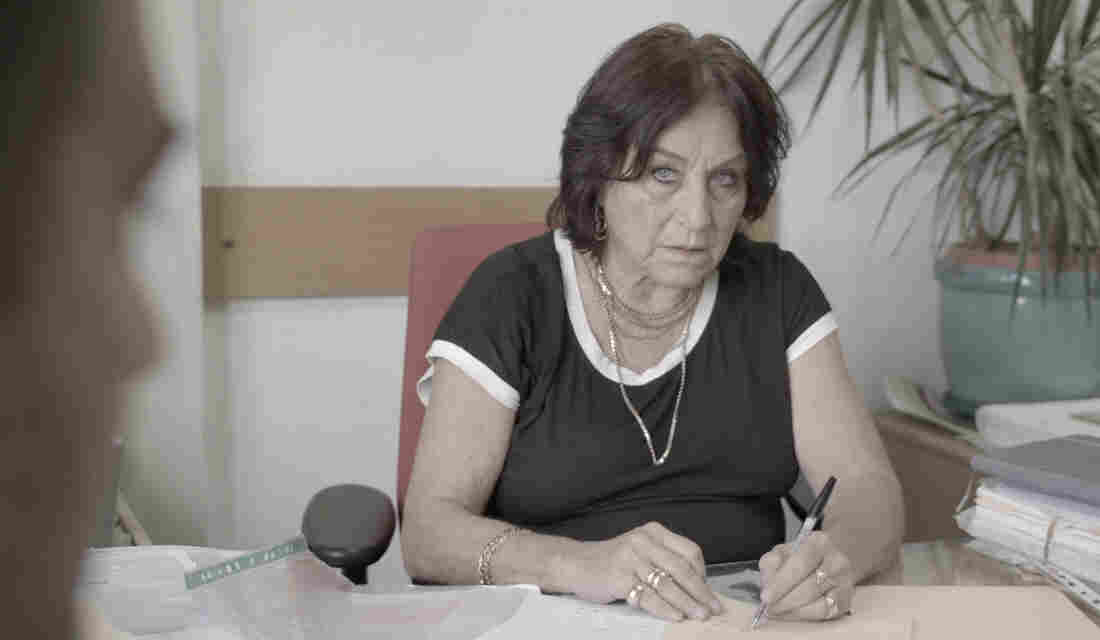 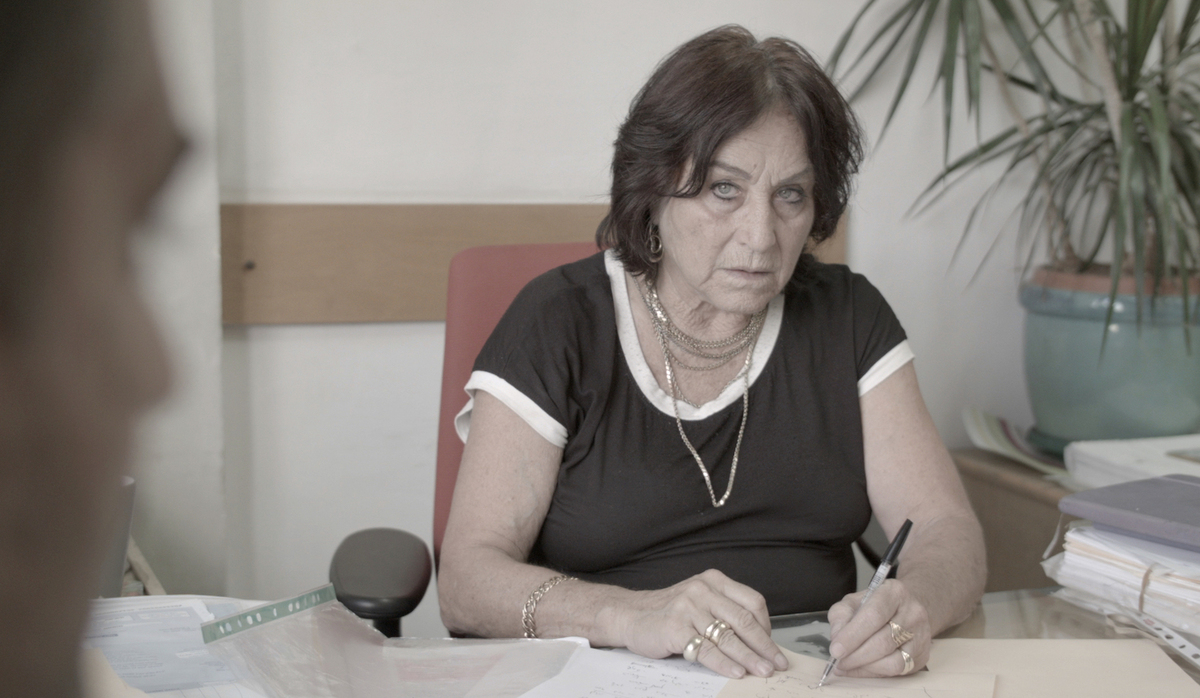 Israeli lawyer Lea Tsemel, 75, in her Jerusalem office. The documentary Advocate, about her work representing Palestinian suspects accused of attacks on Israelis, has sparked controversy in Israel.

Her Israeli critics have called her a traitor and devil's advocate for representing Palestinians facing terrorism charges in Israeli courts. She calls herself a "losing lawyer," losing case after case, defending Palestinian suspects for nearly five decades.

Now the fiery Lea Tsemel, 75, is the subject of an award-winning documentary — and a target in the latest battle between Israel's liberal filmmakers and right-wing activists led by the country's nationalist culture minister.

"There are threats, death threats at me, my family, my grandchildren ... relating to the fact that I'm a Jew and I represent Arabs," Tsemel tells NPR from her east Jerusalem office, before rushing to the Supreme Court to defend Palestinian youths accused in the fatal stoning of an Israeli driver.

Her notoriety in Israel has grown since the documentary, Advocate, was released last summer. Israeli right-wing activists cursed and chased her in court several months ago, she says. On Monday, following protests by activists, the Israel Bar Association froze Tsemel's appointment for a third term as the bar's military tribunal committee chairperson.

Israeli Minister of Culture Miri Regev praised the bar association's decision and celebrated the news that Advocate, which had been shortlisted for an Oscar for best documentary, did not receive a nomination.

"The last thing Americans and the world want is to see the idealizing of terrorists on the screen. We all want to see them assassinated," Regev wrote in a Facebook post. 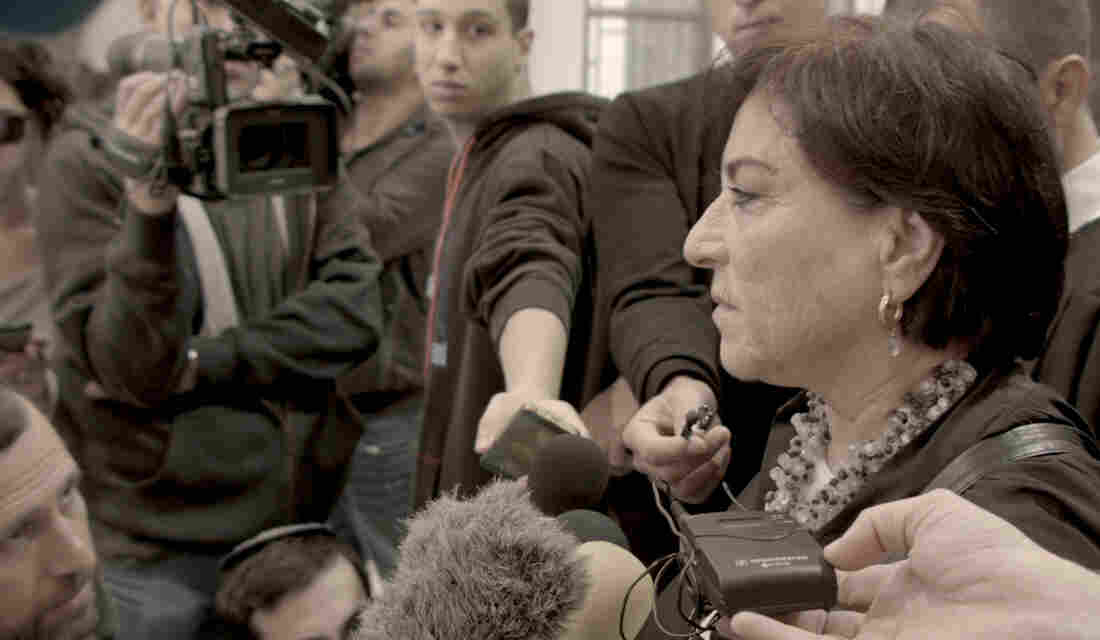 Israeli lawyer Lea Tsemel is shown in Advocate speaking to a scrum of reporters at a Jerusalem courthouse. Film Movement hide caption 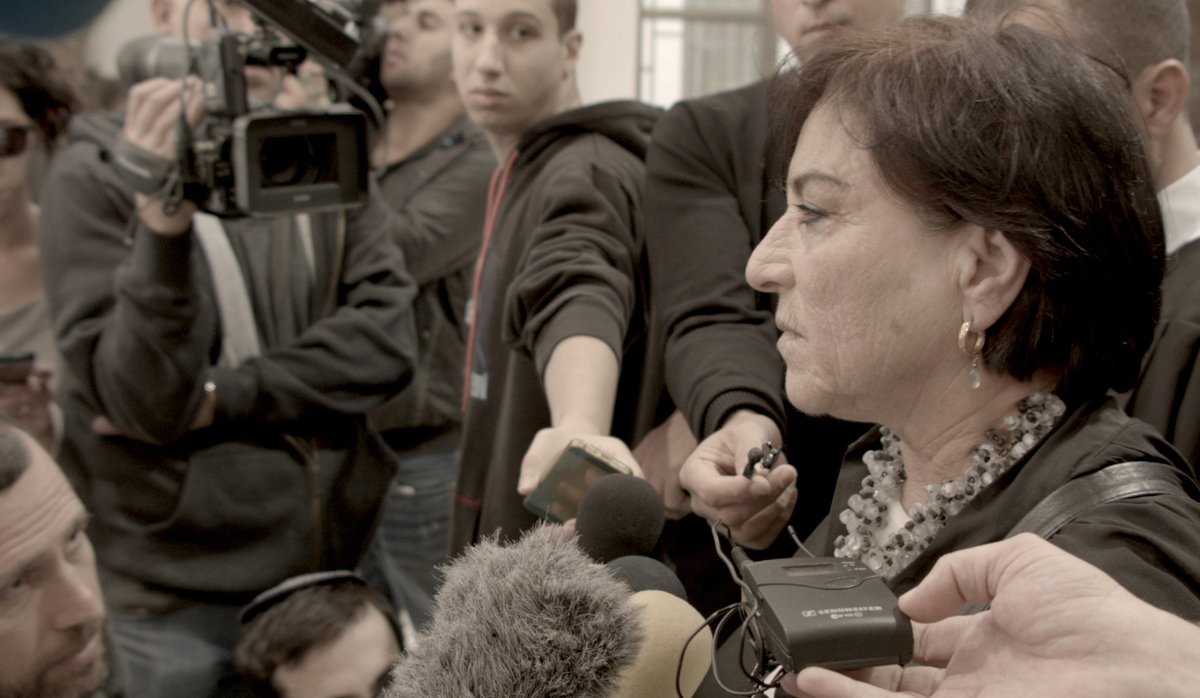 Israeli lawyer Lea Tsemel is shown in Advocate speaking to a scrum of reporters at a Jerusalem courthouse.

"I believe that the film raised some questions and people are looking for answers: Do the Palestinians have rights at all to be defended, to be protected?" says Tsemel.

Advocate, directed by Rachel Leah Jones and Philippe Bellaïche, follows Tsemel's youngest client to date: 13-year-old Ahmad, who joined his cousin as he stabbed and wounded two Israelis before being fatally shot by Israeli officers in 2015.

In the film, Tsemel argues before a group of reporters that Ahmad, who didn't commit the stabbing himself, intended to intimidate, not to kill.

"Now you've really ticked me off," Tsemel says to the prosecutor, after he tells reporters in court that the boy should be convicted for attempted murder.

In the film, Israeli journalists press Tsemel to answer whether it is acceptable for Palestinians to use violence against Israelis. She responds that Palestinians have the right to oppose Israel's military occupation of the West Bank, their indigenous home where they seek independence. 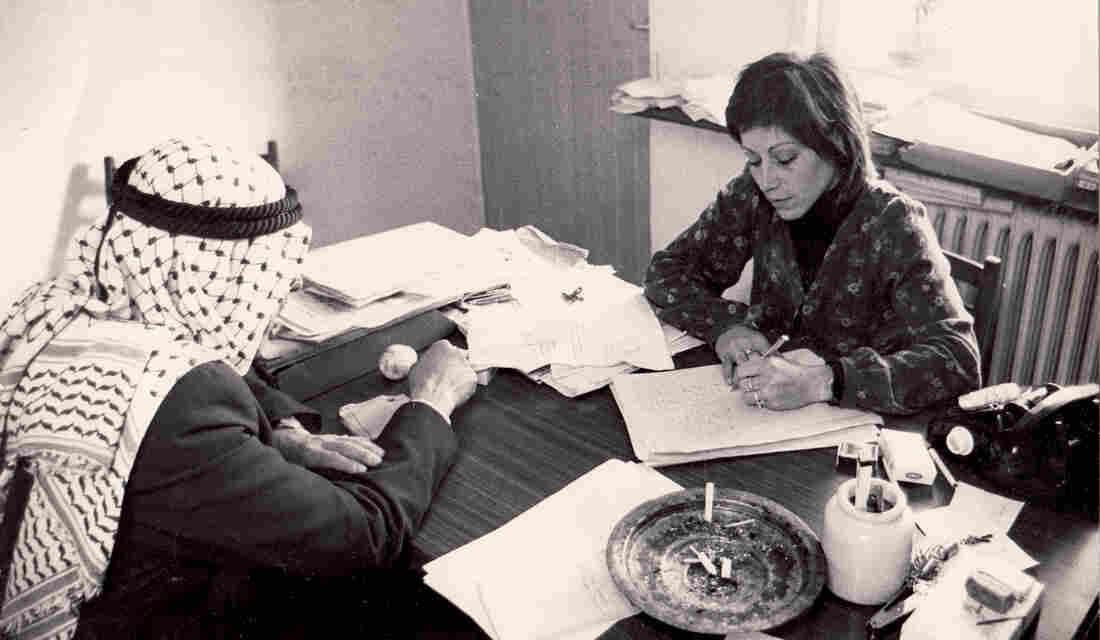 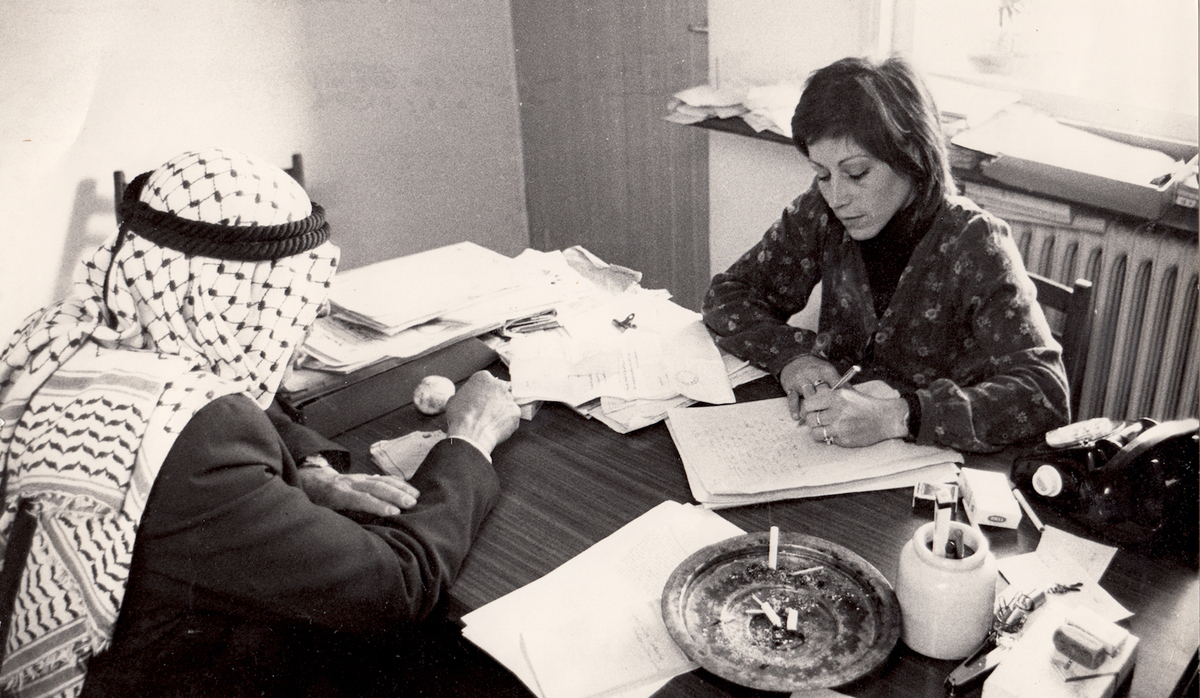 A younger Tsemel meeting a Palestinian client. She has represented Palestinian suspects in Israeli courts for nearly 50 years.

"I don't think that me, as an Israeli, I have any moral standing to criticize [Palestinians] or to advise them or to scorn them. They have the right," Tsemel tells NPR. "I'm the Israeli. I'm the conqueror ... And I cannot afford myself to be so cynical as to tell them: love me."

Advocate, playing for a limited time this month in New York and Los Angeles theaters, received Israel's top award for best documentary last summer. The filmmakers earned a roughly $45,000 prize from Israel's national lottery to mount an Oscar bid — and drew protest from Choosing Life, a group of Israelis whose relatives were killed in Palestinian attacks.

"There is [a] problem with organizations in Israel and also worldwide. They think that to make films and to explain terrorists, it's nice, it's significant. But it's very, very bad," says Choosing Life activist Boaz Kokia, whose son was killed in a stabbing attack. "To give a prize to a director who makes a film about a lawyer who defends terrorists — it's a shame."

Regev, the culture minister — and former military censor in charge of blocking sensitive national security stories from appearing in Israeli media — called on the lottery to rescind the prize money. The lottery agreed.

Then Israeli filmmakers and other artists protested, with some artists on the lottery's judging panel resigning, and some authors withdrawing their candidacy for the lottery's book award. The lottery eventually gave Advocate its prize money. 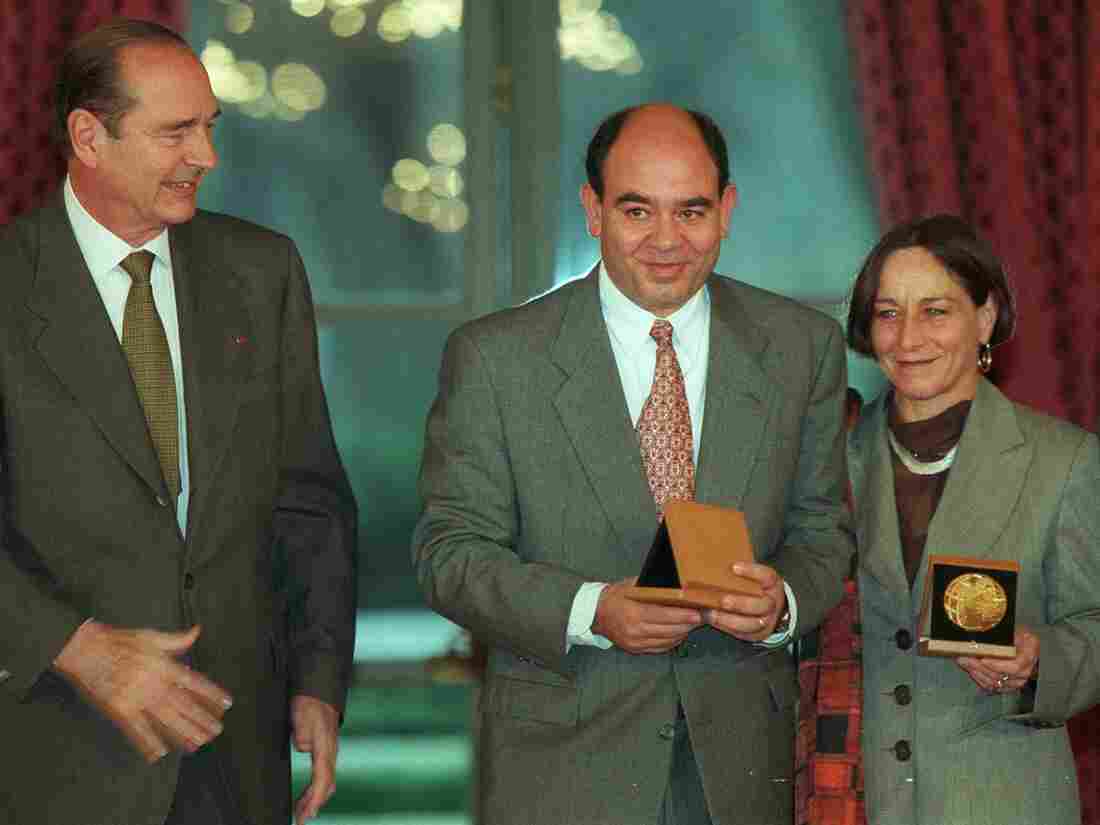 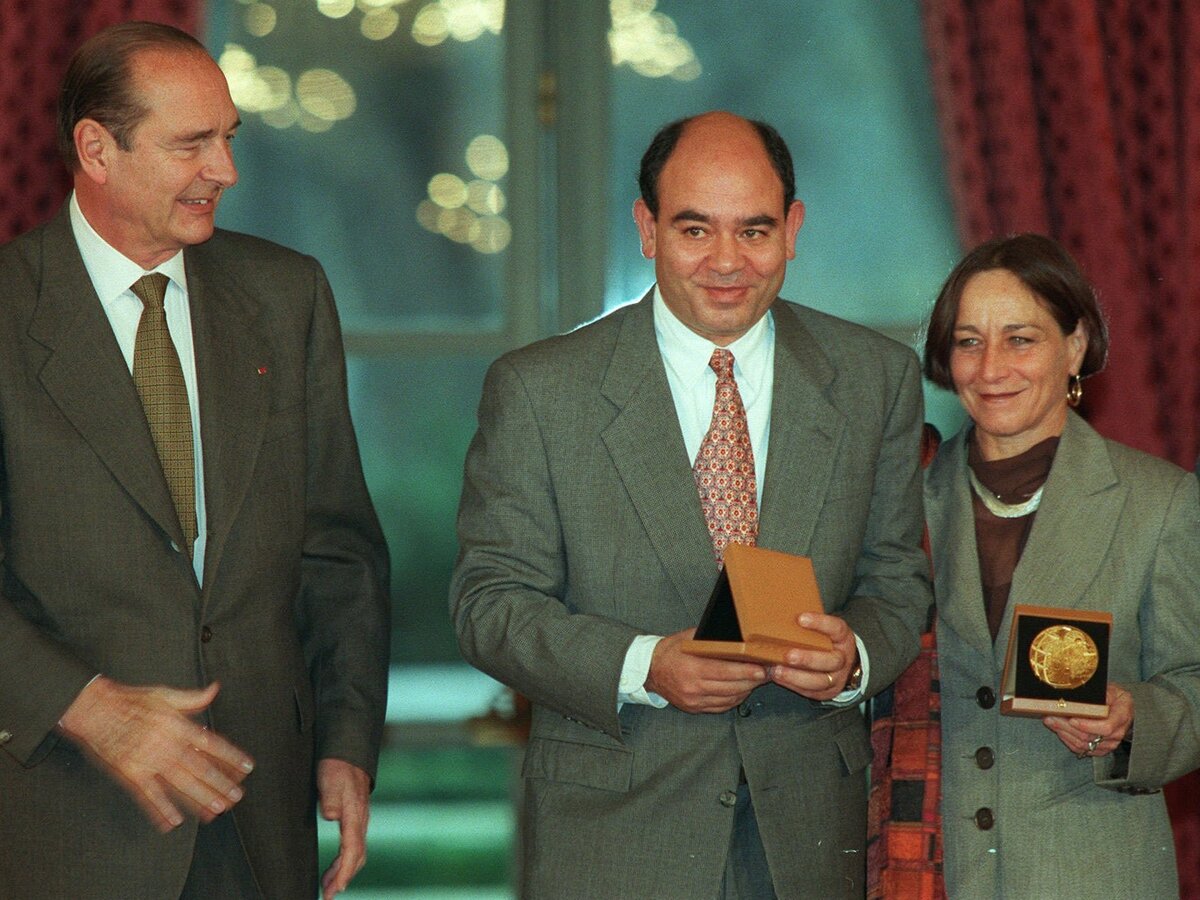 The back-and-forth was part of a four-year battle the right-wing culture minister has waged in recent years against films and plays she perceives as negatively portraying Israel's army conduct or offering a sympathetic look at Palestinians who have taken up arms against Israel. Arguing that Israeli filmmakers tend to skew pro-Palestinian, the minister earmarked special funding in November to bankroll productions filmed in Jewish settlements in the West Bank, apparently as a counterbalance. These films would presumably offer sympathetic portrayals of Israeli life in the West Bank. Regev's office declined comment in response to NPR's request.

The war against Advocate continues. The bereaved Israelis group is petitioning other festivals and an Israeli cable channel to yank the film. Regev successfully pressed for an Israeli film festival to cancel a screening, saying the documentary "glorifies terrorists who kill our children." A second festival also canceled a screening; both were eventually rescheduled.

Israeli filmmaker Amit Goren, whose publicly funded Makor Foundation for Israeli Films underwrote Advocate, attended one of the festivals that canceled a screening. In a speech at the festival, he chided the organizers for doing so.

"I told them something along the lines of ... 'It's provocative. It's thought-provoking. You may not agree with anything in it, but it's worth seeing because it'll make you think,'" Goren said.

He argues the film is pro-Israeli: "It's pro-an Israel that I would like to live in, that listens to the other persons, to the weakened parts of society — in this case, very weakened — allows them a voice and allows for discourse, for argument, for discussion," he tells NPR.

Goren says Regev's moves against the film "created frustration on the part of a lot of the filmmakers, who are struggling with what they should do. You know, should they do a film about the occupied territories now, or maybe find a nice little subject which is compatible with everybody."

Yael Freidson, a reporter for the Israeli paper Yediot Ahronot who appears frequently in the background of Advocate, covering Tsemel's cases, criticizes the filmmakers for not including interviews with victims of the attacks.

"Lea Tsemel's perspective is very important. The ability to see the boy, the human, who pays the price of the occupation, is important to us as an Israeli society," says Freidson. "But the court sees the complete picture, in my eyes, that the film creators made an artistic choice to exclude – the court sees the victims of terror. Every detainee in the film who Lea represents tried to kill Jews."

Within hours of each other, Ahmad, the Palestinian teen is led back to court for sentencing, as is another Tsemel client, a Palestinian woman with a history of attempted suicides who blew up gas canisters at an Israeli army checkpoint, badly wounding only herself. Both receive long prison sentences.

Tsemel's close colleague in both cases, Palestinian lawyer Tareq Barghout, refuses to join her in giving statements to the press in the court. He can't bear to face the cameras.

Advocate ends with both lawyers walking down a courtroom hall. But just before the credits roll, the story takes a surprising turn.

A statement appears onscreen saying that after the film's debut, Barghout was arrested for actions he took a week after the sentencing in those two cases.

Enraged by the outcome, Barghout immediately began a secret life. By day, he worked with Tsemel on cases. By night, he fired at Israeli police jeeps and bulletproof buses carrying Israeli settlers in the West Bank.

Barghout confessed to firing at the police jeeps and buses in a plea bargain, insisting he wanted to avoid hurting anyone while shooting. Two bus drivers were lightly injured, Tsemel says, and did not require hospital treatment. Barghout was sentenced last July to 13 1/2 years in prison.

The revelation of Barghout's actions shook Freidson, the court reporter who saw the Palestinian lawyer in court for years.

"My biggest fear as a Jewish Israeli is the feeling that an advanced, educated Arab can turn on you as a Jew, that someone I worked with suddenly becomes a terrorist," she says.

Tsemel also struggles to make sense of what happened.

"What should I tell you. It's hurting," she says. "Maybe he thought trying to be a lawyer and trying to help his people through the legal world is not efficient enough. Maybe, maybe, maybe, maybe ... I gave him the impression that he should trust the Israeli court more, that he can trust it."

But Tsemel says she refuses to give up seeking justice for her Palestinian clients in Israeli courts.

"I'm very Israeli," she says. "These are my courts and this is my justice."