Accessibility links
Director Bartlett Sher On Chaos, Confidence And 'Collective Genius' Tony-winning director Bartlett Sher is known for adding surprising twists to classic American musicals and dramas. He says when reviving productions you have to ask: "Why are you doing it right now?" 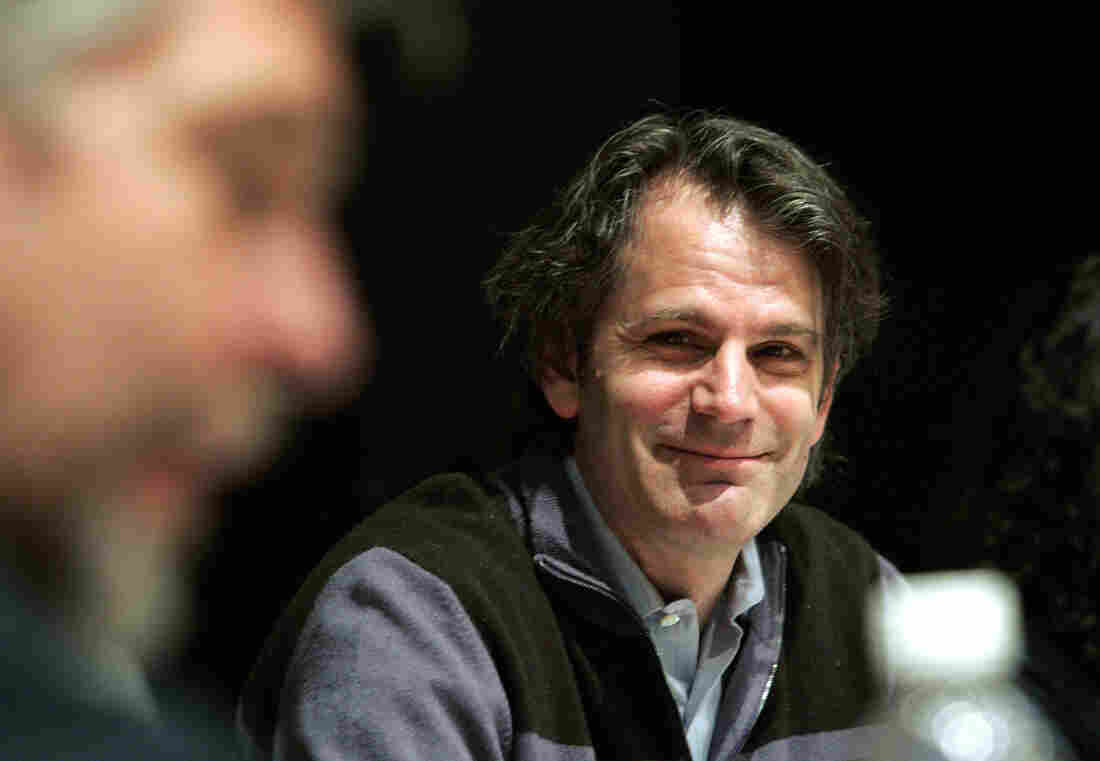 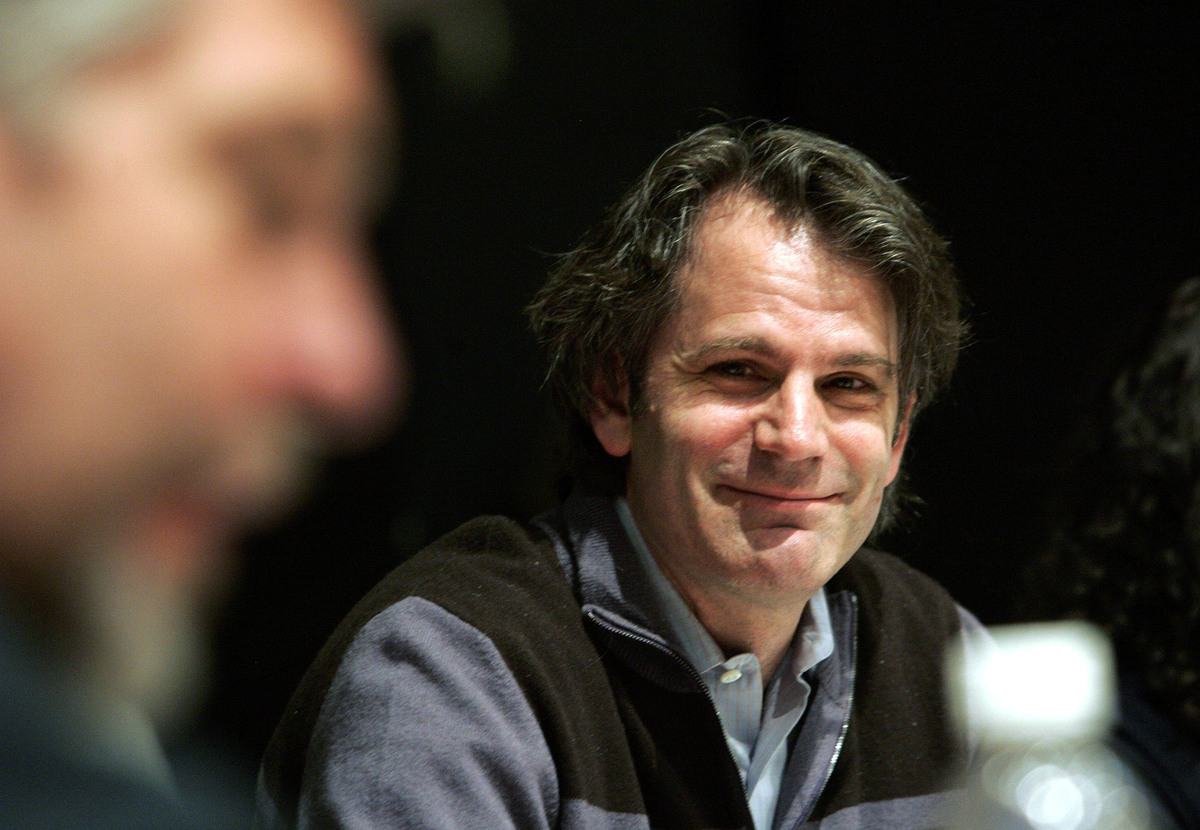 Director Bartlett Sher is now working on an opera based on Lynn Nottage's Intimate Apparel, and preparing the London premiere and national tour of To Kill A Mockingbird. He's shown above during a rehearsal in May 2006, in Seattle.

That approach has earned Sher a Tony Award — and nine Tony Award nominations. As resident director of New York's Lincoln Center Theater, Sher digs deep into American classics — To Kill a Mockingbird, My Fair Lady, Fiddler on the Roof — and makes them feel relevant to today's audiences.

Great coaches need to know every position on the field and theater directors are no different — Sher says that's part of the fun. "I have to know as deeply as I can about the lighting, about set design, about clothes and about acting and pull all of them together ... " he explains. "You have to be kind of in everybody's experience and helping them all do the best work they can do without the assumption that you could do it better."

Celia Keenan-Bolger is an actor who has seen Sher's approach firsthand. She played Scout in the Aaron Sorkin adaptation of To Kill A Mockingbird which Sher directed. In meetings with the cast, she says Sher would "source the room" asking: "Does anybody have a way to explain this that might be more helpful than what I'm using?"

It's a hard balance to strike she says. "Sometimes, if you open up the room too much, it starts to feel like, 'Who's in charge here? Who's running the ship?' But with Bart, there was always a very clear sense that he was in charge, that he had a vision, that we were working towards something, but that he could be greatly influenced by the artists he had surrounded himself with."

Two Broadway shows Sher directed — My Fair Lady and Fiddler on the Roof — are currently on national tours. The national tour of To Kill a Mockingbird begins this summer.

Sher recently came down from New York to attend an early preview of My Fair Lady at Washington, D.C.'s Kennedy Center. The following day at rehearsal, he darts around the theater, talking to the choreographer, the sound and lighting technicians, the conductor in the orchestra pit and the actors on stage.

Three suffragettes walk across the stage with protest signs during the song "With A Little Bit of Luck." In the preview, they were in the background and Sher thinks they walked by too fast. "We need to pull them out more because the audience loves them," he says. He asks the three actors to walk to the front of the stage, stop, face the audience, raise their signs and yell: "Vote for women!"

"Be righteous about it," Sher tells them. In the age of #MeToo, he need not say more.

My Fair Lady was inspired by George Bernard Shaw's 1913 play Pygmalion, in which Eliza Doolittle, a poor-but-feisty flower girl, dreams of a better life. Along comes the arrogant, class-conscious phonetics professor Henry Higgins to teach — or more like torment — her to speak the Queen's English. In the final scene of Pygmalion, the newly empowered Eliza has tender feelings for the sexist professor but leaves him — end of story. But in the musical by Alan Jay Lerner and Frederick Loewe, Eliza comes back. In a supposedly crowd-pleasing, happy ending, the dueling couple falls for each other, despite the fact that Henry has treated Eliza horribly throughout the entire show.

Sher's with Shaw on this one: "Shaw hated the idea that they will ever, ever end up together," Sher says. "He was anti rom-com of any kind. He was an incredible feminist, fought hard for all kinds of equality."

In Revival, 'South Pacific' Still Has Lessons To Teach

In Sher's My Fair Lady, Eliza ditches Henry for that better life she's been dreaming about, far from "Hartford, Hereford and Hampshire."

Shereen Ahmed, who plays Eliza in the national touring company, says she connected to her character's "resilience and ambition."

"As a young Egyptian girl trying to just find her place in society, I was having trouble fitting in and finding my own identity," Ahmed says. "Something about Eliza's determination to better herself ... really resonated."

She says Sher gave her the "space" to "discover" that connection.

With classic productions, Sher tries to understand the context in which the works were created — and then bring them into the present day.

"Whenever you do one of these musicals, you have to look at the immediate significance of the time you're in and why are you doing it right now," he says.

A 'Fiddler' For Today

For the Broadway revival of Fiddler on the Roof, Sher drew from his own background. Sher's father was born in a shtetl in Lithuania, similar to Tevye's Anatevka. In the opening and closing scenes, Sher made a small but important change: the actor playing Tevye looks like a modern-day tourist, dressed in a parka. He could be Tevye's descendant.

"We looked at that experience of somebody going back to explore their past ... and mix that with the current refugee situation," he explains. The Fiddler revival explores "what it means when you're driven out and who you are and how you survive that."

Yehezkel Lazarov, the Israeli actor who plays Tevye on the national tour, says Sher wants to make sure audiences connect the past with the present.

"He definitely wanted people to understand that we are part of a community," says Lazarov. "Unfortunately [the refugee crisis], it's part of our reality. It's part of our life right now, as we speak. And although Fiddler exists for 60 years already or more, it's still very, very much relevant."

To find out how his shows are being received, Sher talks with audience members during intermission. In New York, they can be brutally honest. He remembers directing a musical version of the Pedro Almodóvar film Women on the Verge of a Nervous Breakdown and ... it didn't go well.

"I remember walking up the aisle and a group of older Lincoln Center women subscribers looking at me and all together turning their thumbs over and down to tell me that it was terrible," Sher says. "And I joyfully went up and said, 'So why are you feeling that?' I got more of an answer than I probably wanted — but that's the spirit in New York. And you have to have enough confidence, enough belief in what you're doing, that it's not about whether it's good or bad — it's about this sort of thing you're making."

Sher admits it's taken years of practice to develop that confidence. He grew up in San Francisco, one of seven children. No one else in his family worked in the arts but he credits his older brothers with giving him his first theater experience when he was 11 — at a Grateful Dead concert.

"They were an improvisational band, so they never knew what number they were going to do next ..." he recalls. "And the audience ... they were connecting into it in a very intense way. So you had this ... kind of spiritual kind of insane experience all at once."

He says both the city and his family made for a lively adolescence. "I had one brother at the Naval Academy and one brother at Stanford," he says. "And the difference between the two, and the politics that were all over, everybody was screaming and yelling. It was fun. I thought the world was pretty crazy and pretty exciting and got to be lucky enough to not have a problem with chaos."

That might be a Broadway theater director's most valuable skill. Sher's "collective genius" credo means lots of research, many deadlines and constant communication with actors, writers, choreographers, lighting and costume designers.

Back at the bustling Kennedy Center rehearsal of My Fair Lady, Sher's passion for his gig is infectious. "The music, the movement, the design, the fact that we're doing a whole film in front of you every night," he says, "Everything delivering, up and down and the coordination of all these elements. It's pretty mind-boggling."