Accessibility links
'A Very Stable Genius' Trump-Term Retelling Smacks Of A Prosecutor's Courtroom Summation A Very Stable Genius gives pause to ponder: Is this moment simply about Trump — or are we also witnessing a sea change in journalism? Are we seeing new standards for the presentation of a presidency? 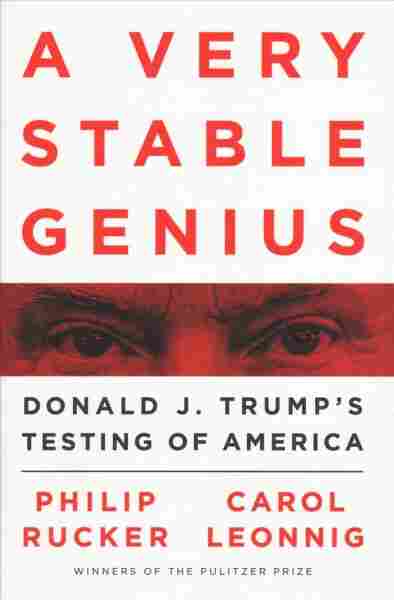 by Carol Leonnig and Philip Rucker

Book-length critiques of the presidency of Donald Trump keep piling up on American reading tables, so it seems time for a one-volume wrapup on what we have learned so far.

Imagine, for a moment, a high-octane courtroom prosecutor summing up for the jury a case built on the vivid testimony of multiple eyewitnesses.

More than a dozen previous books by close observers and insider-survivors of the Trump administration have provided that testimony. Now come Philip Rucker and Carol Leonnig of The Washington Post to make the closing argument with plenty of reporting of their own.

You could scarcely ask for more capable advocates. Leonnig won a Pulitzer Prize for her reporting on the U.S. Secret Service in 2015, then joined Rucker and others on a team awarded the Pulitzer for stories on Russian interference in the 2016 election.

Their new, collaborative account — titled A Very Stable Genius: Donald J. Trump's Testing of America — walks readers step by step through the first 30 months or so of a presidency like no other. They leave little doubt that they and many of their sources regard that presidency as an unmitigated and deepening disaster — a threat to American government as we have known it.

Rucker and Leonnig's mission is manifest in their title, a sarcastic jab at one of Trump's more memorable moments of self-congratulation. Accused of being either unthinking or unstable, Trump at the time denied being either. He was, he said, "a very stable genius." Whether the president meant that with a touch of self-deprecating humor or not, it functions here as the epitome of self-delusion.

Trump stands accused in these pages of gross incompetence, rampant racism, pathological narcissism, indifference to facts and ethics, and a penchant for chaos. There can be no doubt the prosecutors are asking the jury — and the judgment of history — for a verdict of guilty.

Can a president really be this far removed from the reality base that the rest of official Washington takes for granted? Yes, say Rucker and Leonnig — and what is more, his free-form defiance of norms and restraints is the essence of Trump's governance — and of his enduring appeal to his adherents.

Older readers may recoil from much of this assessment — not only because the behavior described is repellent, but also because its depiction in such relentlessly damning detail is disturbing. People naturally ask: How much of this can be true?

One example sure to be much discussed is an anecdote from Trump's 2017 trip to Asia, which involved a stopover in Hawaii and a tour of Pearl Harbor. The authors relate how, while en route to the memorial for U.S. service members killed in the Dec. 7, 1941, attack that brought the U.S. into World War II, Trump "pulled [Chief of Staff John] Kelly aside for a quick consult."

The authors then have Trump saying: "Hey John, what's this all about? What's this a tour of?"

Next we are told: "Kelly was momentarily stunned. Trump had heard the phrase 'Pearl Harbor' and appeared to understand that he was visiting the scene of a historic battle, but he did not seem to know much else."

Later on the same page, we have "one senior former adviser" adding that Trump "was at times dangerously uninformed."

Kelly would seem to be the only person who would have firsthand knowledge of the president's question and of Kelly's own reaction. This is only one of several points in the book where the former Marine Corps general seems the likeliest source on one incident or another.

So if he was the source, why not say so? Perhaps because Kelly spoke to the authors "on background" or for some other level of attribution.

Previous books about Trump have also prompted debates about sourcing and attribution. Like Michael Wolff's two efforts at exposés and Bob Woodward's Fear, this account relies on a mélange of on-the-record and off-the-record insiders with varying degrees of proximity to the president.

At times, this mixed methodology presents real problems. We are told many things that "some critics" or "some in the White House" or "former officials" have told the authors. Without questioning the legitimacy of these quotations, can we rely upon them the same way we would trust direct attributions?

To the authors' credit, the on-the-record elements are compelling on their own. These include attributed material from former strategist Steve Bannon, former transition chief (and former New Jersey governor) Chris Christie and some of Trump's Manhattan peers, Tom Barrack Jr. and Chris Ruddy.

Somewhat more speculative are the thoughts indirectly attributed to former White House personnel such as Kelly, including Rex Tillerson (his first secretary of state), Jim Mattis (his first secretary of defense) and Don McGahn (his first White House counsel). All the above come off as valiant public servants who strove to be guardrails — to keep the president's rogue instincts in check – until they were fired or resigned.

We often hear that a particular White House official was "surprised" or that they felt one way or another. Without a direct quotation, this is either a species of omniscient narrator or an example of reporters protecting their sources. In this work, as in much contemporary reporting, reporters offer a real-time, firsthand narration of events they did not witness personally. We are being given the eyewitness accounts secondhand.

One such anecdote tells of Trump meeting for the first time with Prime Minister Narendra Modi of India.

Trump is quoted saying to Modi at one point: "It's not as though you have China right on your border..." We are told this prompted Tillerson to cover part of his face with one hand so as to signal something to Modi without Trump seeing it. (For the record, India's 2,500-mile border with China is more than 500 miles longer than the U.S. border with Mexico.)

On another occasion, we are told, Trump summoned various officials to discuss the Foreign Corrupt Practices Act, which bars U.S. companies from paying bribes to foreign governments to secure business contracts. Trump said he wanted that law erased. Told he could not do undo legislation by fiat, Trump reportedly turned to ultra-loyal aide Stephen Miller and said: "Steve, draft an executive order to repeal that law."

Those who followed these events in real time may feel as if they are being dragged back through nightmares they would rather forget. At the same time, for those who have not been as focused on the daily and weekly ups and downs, this catalog may come with the force of revelation. For that reason alone, it is highly valuable.

Still, you don't have to be a Trump loyalist to feel the authors have chosen only the incidents and eruptions that cast Trump in the most unfavorable light, a style reminiscent of the muckraking journalists of a century ago. Those who wish to see Trump's offenses balanced against his tax-and-regulation cuts or hear encomiums to his transformation of the federal judiciary will need to look elsewhere.

As excerpts of the book appear in the Post, we can expect a blizzard of blowback from Trump. In fact, even before publication, he had begun tweeting insults to inoculate his followers against any infection from Rucker and Leonnig's labors — calling Rucker "Mr. Off-the-Record" and suggesting that the Post's "nasty" White House bureau chief should not be allowed back on the grounds.

When Trump sent those tweets, the Post immediately rejected criticism. It stood behind its reporters just as it did in the Watergate era, when the team of Bob Woodward and Carl Bernstein sparked the larger, official investigations that would drive President Richard Nixon from office. Their work relied substantially on unnamed sources, including one in particular ("Deep Throat") who turned out to be the deputy director of the FBI.

We have long relied on front-line reporters from the most prominent news organizations to write books about the powerful figures they once covered. Such books have always trafficked in insider knowledge and insights gleaned from hours spent close to the flame of political power.

Yet there is something unsettling about the evolution of this genre. Is it purely a matter of Trump's excesses or has he occasioned a sea change in journalism as well? Is it all about Trump, or are we also witnessing a new set of standards for the presentation of a presidency — or of politics in general?

In terms of the Trump timeline, this book wraps up around the time the Mueller report on Russian interference in the 2016 election is being debated. Although special counsel Robert Mueller concludes the Russians did interfere in 2016 in hopes of helping Trump, his report does not find a criminal conspiracy involving the Trump campaign itself. But Mueller also provided a list of occasions when Trump's actions could be seen as interfering with the investigation, adding that he could neither indict a sitting president nor say these actions were not indictable.

Nonetheless, with Attorney General William Barr and Republicans in general treating the report as an exoneration, the authors tell us, Trump felt liberated. As one former official of his administration tells them: "There's a new ethos: This is a presidency of one. It's Trump unleashed, unchanged, unhinged."

In their final pages, the authors draw a clear line from that moment to the one when Trump makes the moves regarding aid to Ukraine and his desired investigation of prospective rival Joe Biden — the line that led on to Trump's impeachment.

Whatever may happen to that impeachment effort in the weeks and months ahead, it creates a moment of intermission in the Trump saga and a chance to consider how the landscape has already been altered by this president. A Very Stable Genius offers a harrowing companion narrative to be read during intermission.