Accessibility links
Trump Signs 'Phase 1' China Trade Deal, But Most Tariffs Remain In Place President Trump signed a trade deal with China on Wednesday. The agreement relaxes some U.S. tariffs on Chinese imports. In exchange, China is expected to buy more from the U.S. 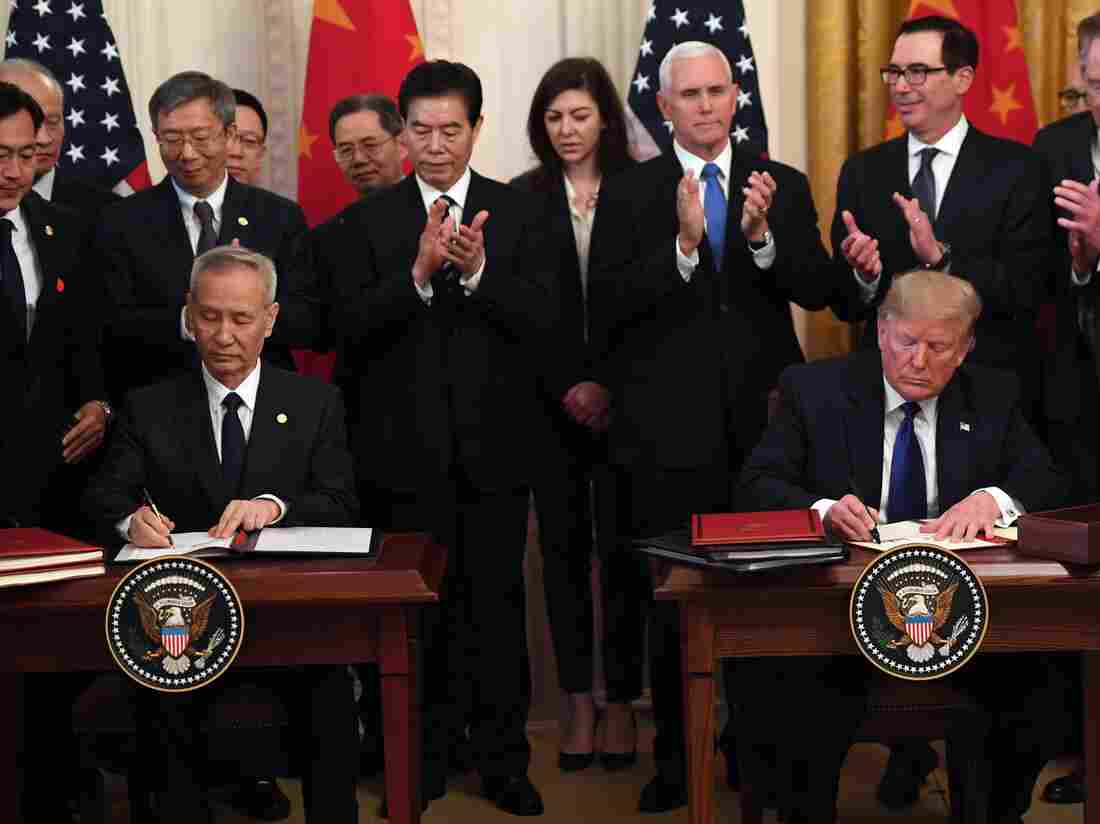 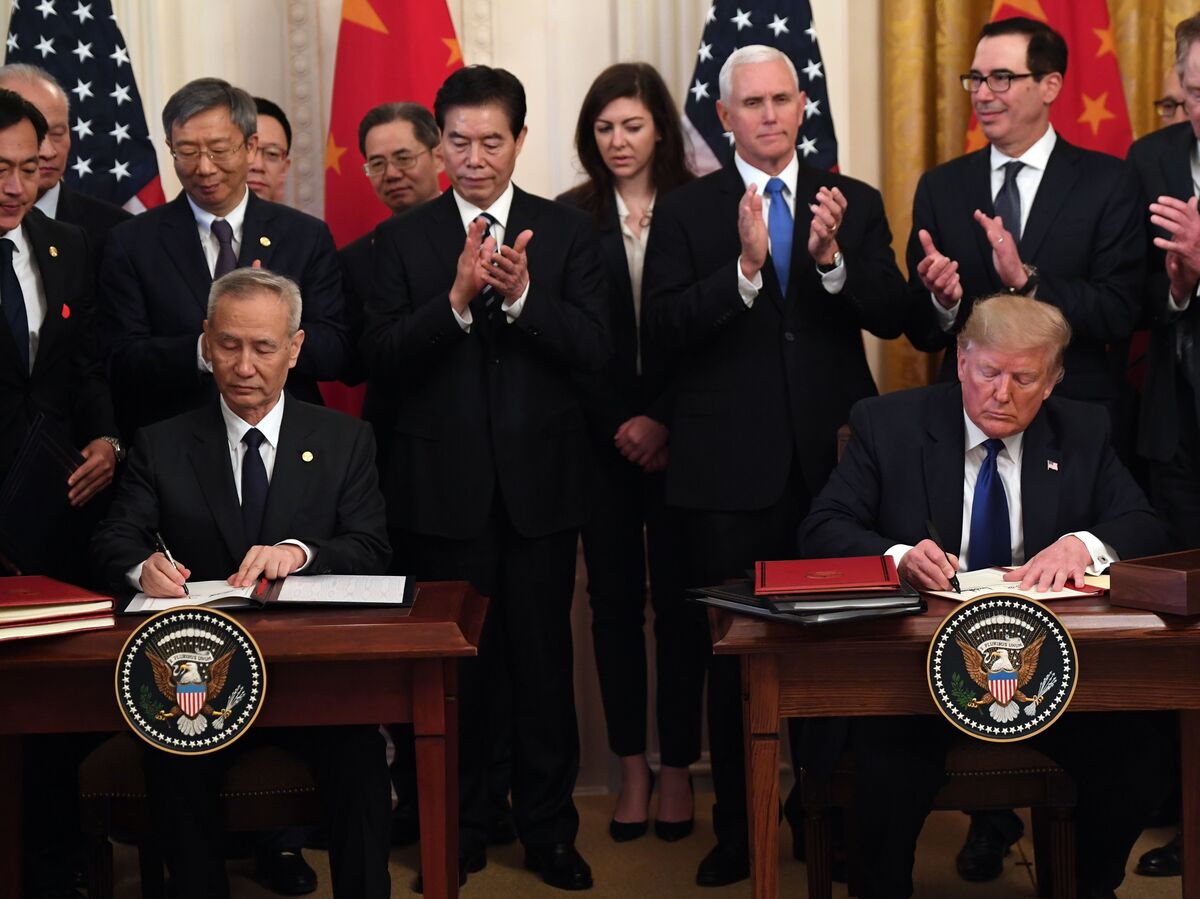 President Trump and Vice Premier Liu He, China's top trade negotiator, sign a "Phase 1" trade agreement between the U.S. and China at the White House on Wednesday.

A year and a half after launching his trade war against China, President Trump signed a partial truce on Wednesday.

"We mark more than just an agreement. We mark a sea change in international trade," Trump said during a White House signing ceremony. "At long last, Americans have a government that puts them first."

The president agreed to relax some of the tariffs he imposed on Chinese imports. In exchange, Beijing has agreed to buy more American products and make other changes.

"This is a big win for the president," Treasury Secretary Steven Mnuchin told Fox News, while conceding the "Phase 1" agreement does not achieve all of the reforms the administration initially sought.

"It's not everything," he acknowledged. "There will be a 'Phase 2.' But this is the first time we've had a comprehensive agreement with China."

As part of that deal, China has promised to provide more protection for American companies' intellectual property and to stop requiring U.S. companies to share their technology as a cost of doing business in China.

Beijing has a history of backsliding on such pledges. But the administration expressed confidence that the terms of this deal are enforceable.

"This agreement will work if China wants it to work," said U.S. Trade Representative Robert Lighthizer. "They expect and we expect it to be enforced to the letter."

The administration agreed not to impose tariffs last month on some $160 billion in Chinese imports — including popular consumer items such as cellphones and laptops — as part of the Phase 1 agreement. It also reduced the tariff rate on another $112 billion worth of goods from 15% to 7.5%.

But steep 25% tariffs remain in place on much of what the U.S. buys from China, including components that American factories use to assemble finished products. While Trump insists that China is paying those tariffs, numerous studies have found the costs are largely borne by American importers.

"This continues to be a drag on the manufacturing sector, which really has not been doing well in the last couple of quarters," said Syracuse University economist Mary Lovely.

Farmers also took a hit during the trade war, as China cut back sharply on its purchases of U.S. agricultural products.

"It's been a long haul, and the lack of certainty is probably the most challenging portion of this," said Kristin Duncanson, who raises soybeans, corn and hogs in south central Minnesota. "We can weather the weather. We know how to do that. It's weathering the politics that's the tough part."

Duncanson estimates her soybean crop lost 30% to 40% of its value during the trade war, thanks to low prices and the lack of Chinese demand. That loss was only partially offset by federal aid for affected farmers. Duncanson is hoping for a rebound once the trade agreement is signed.

"We're optimistic that signing the agreement will reopen some opportunities, especially for the Upper Midwest," she said. "But I'm also a realist enough to know until those beans are actually shipped to customers that we can't count our chickens before they're hatched."

The administration says China has pledged to boost its purchases of U.S. goods and services over the next two years by $200 billion over 2017 levels. That would represent an increase of more than 50%.

"We're delighted that the Chinese consumers will now enjoy the greater access to the best products on earth: those made, grown and raised right here in the USA," Trump said.

Lovely said it's possible for China to increase its purchases by $200 billion, but warned it could have a disruptive effect on global trade flows.

Has The Trade War Taken A Bite Out Of China's Economy? Yes — But It's Complicated

"This should be giving our other trade partners some serious anxiety because one way [for China] to achieve those targets is simply to stop buying from other countries and shift purchases to the U.S.," she said.

China's Vice Premier Liu He joined Trump at the White House for the signing ceremony.

While the agreement leaves major economic disputes between the two countries unresolved, Lovely said the 18-month trade war has allowed both sides to send a message.

"The U.S. is going to use whatever muscle it can to get what it wants," she said. "On the other hand, it's also shown the United States that China's going to be very hard to bully."