Accessibility links
Recap Of Last Democratic Debate Before Iowa Caucuses The candidates clashed over war, gender and health care with less than three weeks to go before the first votes in the Democratic presidential nominating fight. 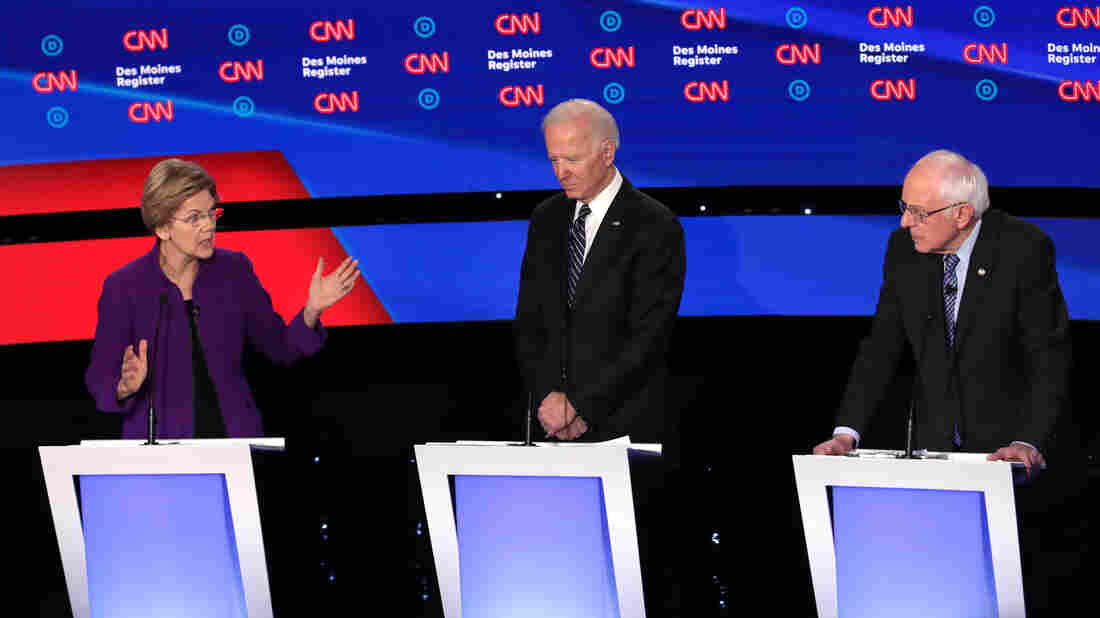 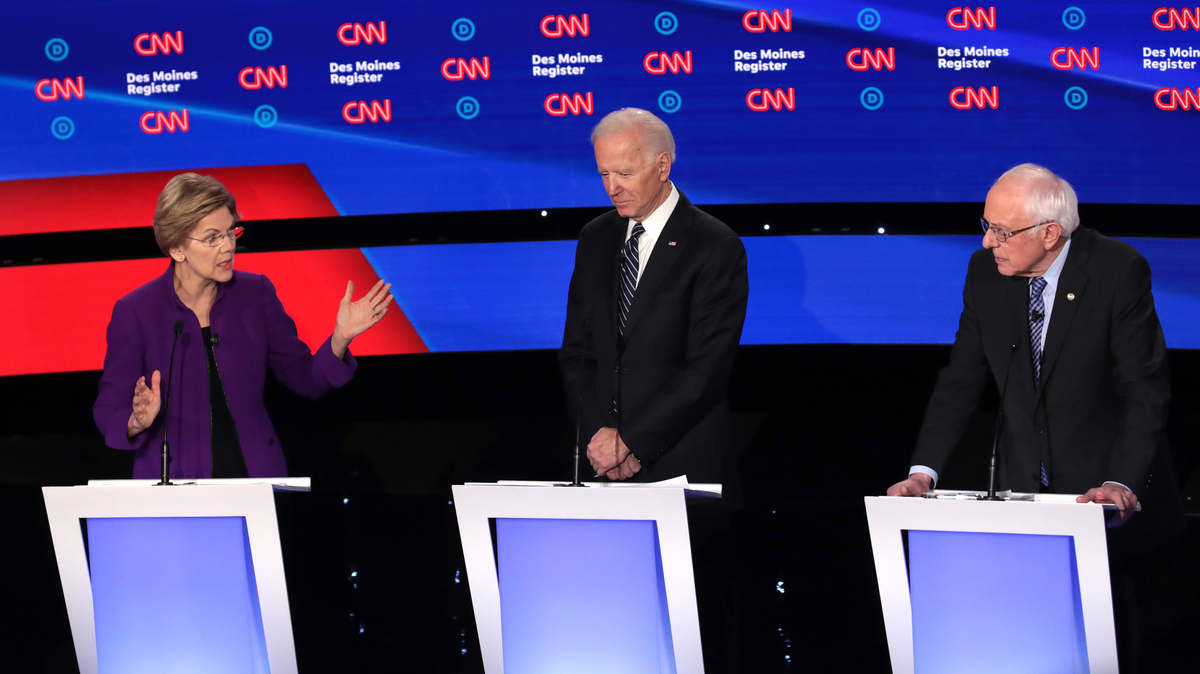 There are now no more official debates before Democrats begin voting.

Tuesday night's debate was the last before the Iowa caucuses on Feb. 3, and it featured six of the 12 remaining candidates — the top four of whom polls show to be neck and neck.

Democratic primary voters got a substantive debate in which the candidates clashed over what it means to be commander in chief, gender politics and, of course, health care.

1. Warren, Sanders pivot away from the fight over whether a woman can win — for now

The big question coming into Tuesday night: How would the alleged disagreement between Sens. Elizabeth Warren of Massachusetts and Bernie Sanders of Vermont on gender politics play out on the debate stage?

The progressive duo has long observed a nonaggression pact in this race. That came apart this week when Warren said Sanders told her before this campaign that a woman couldn't win the general election. But neither seemed in a mood to pick up the fight Tuesday night.

"Well, as a matter of fact, I didn't say it," Sanders said, denying that he told Warren in a meeting in late 2018 that a woman couldn't win. He pointed to his record of encouraging women to run and of campaigning for women. And he remarked that 2016 Democratic nominee Hillary Clinton defeated Donald Trump in the popular vote by nearly 3 million votes.

"How could anybody in a million years not believe that a woman could become president of the United States?" he said.

CNN's Abby Phillip followed up not by asking Warren if Sanders was lying, but instead by asking how she reacted when Sanders said it to her.

"I disagreed," Warren said, and cleverly added that, combined, the men onstage had lost 10 elections, and the only two to have won every election they've run in were the women onstage — Warren herself and Minnesota Sen. Amy Klobuchar.

But Sanders and Warren may not have completely put their differences aside. A video of the candidates after the debate shows what appears to be a less-than-friendly exchange.

2. Foreign policy became a principal issue for the first time

Picking a president means picking a commander in chief, and for the first time in this campaign foreign policy became a main issue. Given last week's events with Iran, that was inevitable, and the initial 30 minutes of questions and answers were focused on it.

It was the first debate to start with foreign affairs, and as is true on a lot of other issues, it quickly became a progressive-versus-moderate tussle. That meant former Vice President Joe Biden and former Mayor Pete Buttigieg vs. Warren and Sanders on their worldviews and troop deployment.

Asked to define herself as commander in chief, Warren interestingly said she'd fight the "revolving door" between defense industry contractors and the Defense Department and called to "get our combat troops out" of the Middle East.

Biden argued that "there's a difference between combat troops and leaving special forces in a position." He warned that ISIS will come back if the U.S. abandons the region.

"I think it's a mistake to pull out the small number of troops that are there now to deal with ISIS," Biden said.

If Democrats love debating and getting into the weeds on one policy, it's health care. It was the sharpest dividing line in the 2008 primaries, and it's still the starkest difference among candidates.

Sanders faced tough questions on the cost of his plans; Biden said it was important to be transparent about cost; Warren dismissed the Biden and Buttigieg plans as "small improvements," to which Buttigieg said, "It's just not true," describing his plan as "a game-changer ... the biggest thing we've done to American health care in a half-century."

Democratic primary voters say health care is their top issue, and candidates have spent so much time on the topic that they really know it in great depth.

You wonder what a debate over health care — or climate change, for that matter — would sound like in a general election debate with Trump. He doesn't get into this kind of detail, and he'd likely pivot away from having to talk about it in any depth.

4. The top four candidates were the focus more than in past debates

If it wasn't clear that this was a four-person race, all you had to do was watch Tuesday's debate. On issue after issue, it was Biden and Buttigieg versus Sanders and Warren, with some crossover of Sanders versus Warren when it came to trade or whether a woman could win the general election.

Of the top four, Sanders hit his usual notes. If you like Sanders, you still do; if you don't, you don't. He also likely didn't win over any Warren voters Tuesday, because Warren was solid. 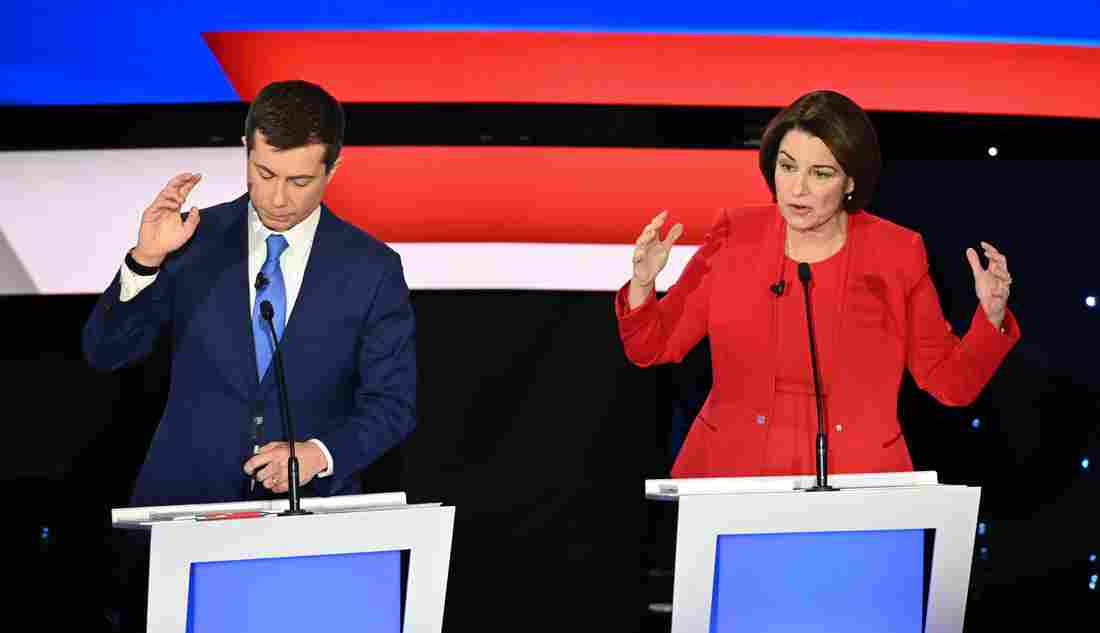 Biden again stumbled in spots and wasn't as crisp or energetic as in the last debate, but he made his case for a forceful foreign policy and national unity.

Buttigieg seemed to shrink from the spotlight some in this debate. He had some good moments, but in a debate that started off with the grave issue of war, the audience likely remembered Buttigieg not for being the only military veteran on the stage, but for having an operations command center in a small city.

Klobuchar, who has been the candidate who has most gone after Buttigieg's lack of national experience, didn't stand out in ways that she had in other debates.

Billionaire investor Tom Steyer was left fighting for time, though if climate change is your top issue, you probably liked how Steyer talked about it.

Tuesday night was arguably the first time the audience got to hear a real debate among the top-tier candidates. It's notable that that's only happening now, as the big Democratic field finally narrows to something manageable for voters.