Accessibility links
Flynn Asks To Withdraw Guilty Plea In Case Stemming From Mueller Probe Michael Flynn, who held the post of national security adviser in the Trump administration for less than a month, was set to be sentenced on Jan. 28. 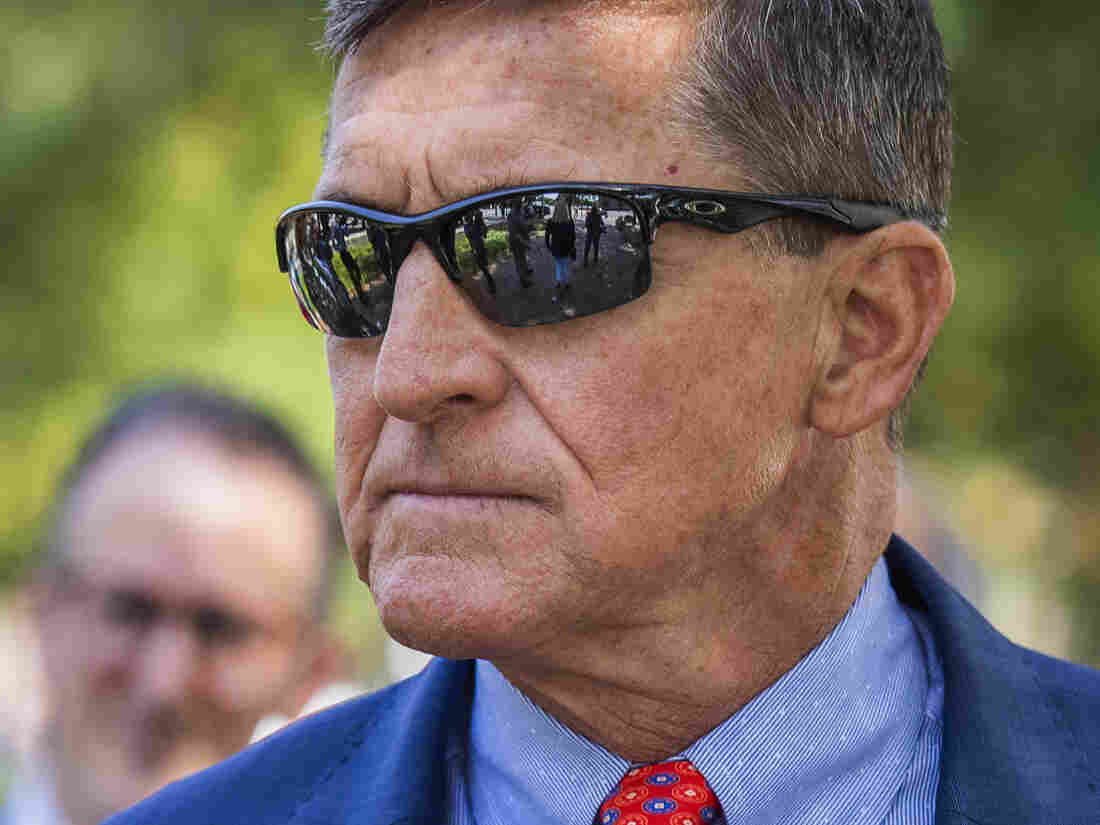 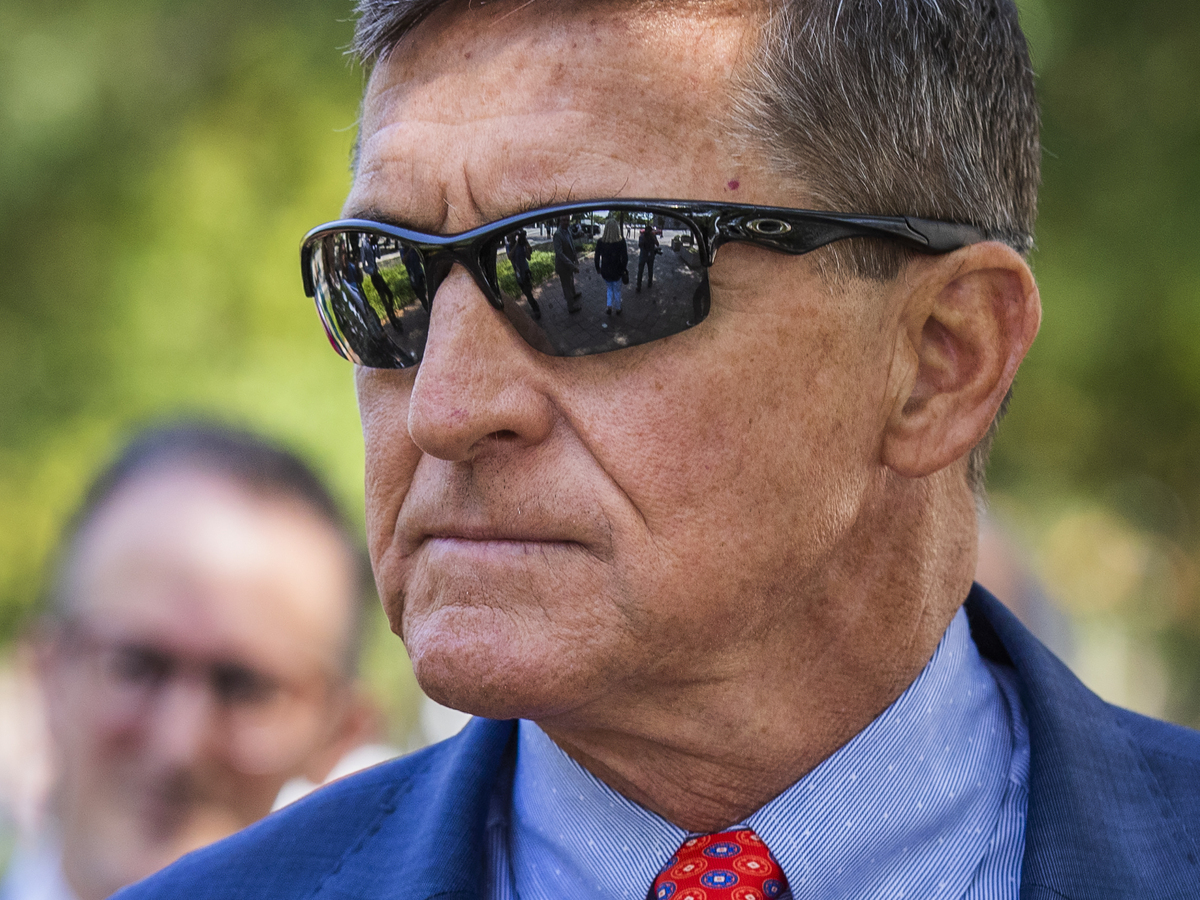 Former national security adviser Michael Flynn, who admitted to lying to the FBI about contacts with Russia's ambassador to the U.S., wants to withdraw his 2-year-old guilty plea, saying federal prosecutors reneged on a promise to not ask for jail time at his upcoming sentencing.

Flynn, who held the post of national security adviser for less than a month, is the only Trump administration official to face criminal charges in connection with special counsel Robert Mueller's probe into Russian election meddling. He was to be sentenced on Jan. 28.

"The government's stunning and vindictive reversal of its earlier representations to this Court are incredible, vindictive, in bad faith, and breach the plea agreement," Sidney Powell and Jesse Binnall, Flynn's lead counsel, wrote in the motion.

"Michael T. Flynn is innocent. Mr. Flynn has cooperated with the government in good faith for two years. He gave the prosecution his full cooperation," they wrote.

The defense asked to delay Flynn's sentencing by 30 days, to Feb. 27, and the government says it has no objection. U.S. District Court Judge Emmet Sullivan has yet to rule on the request.

The U.S. Attorney's Office in Washington, which took over the case from Mueller, recommended earlier this month that Flynn receive "0 to 6 months of incarceration."

In the sentencing memo, prosecutors said Flynn had been less than cooperative in an investigation of his former partner, Bijan Rafiekian, at Flynn Intel Group, a lobbying firm.

Rafiekian was found guilty in July of conspiring to act as an undisclosed agent of Turkey. However, Flynn was not called to testify in the trial. Prosecutors deemed him unreliable after he changed his account of events, they said. Flynn's attorneys have disputed that characterization.

But prosecutors pushed back on the notion that their sentencing memo had changed the terms of their deal with Flynn.

Writing to Flynn's defense team on Monday, Justice Department attorneys Brandon Van Grack and Jocelyn Ballantine said, "We believe that a sentence within the applicable Guidelines range — which includes a possible sentence of probation — is appropriate in this case."

"[T]here appears to be no dispute as to the applicable sentencing range or the fact that a non-incarceratory sentence would be a reasonable sentence within that range."

The case against Flynn

In December 2016, President Barack Obama placed sanctions on Russia in retaliation for Moscow's interference in the presidential election. In the same month, Flynn, a senior official on the Trump transition team, contacted then-Russian Ambassador to the U.S. Sergey Kislyak, urging Moscow not to escalate the situation and offering the prospect of a better relationship under the new president, according to court documents.

Flynn then lied to the FBI about those conversations.

In December 2018, Sullivan delayed sentencing, calling into question Flynn's guilty plea "or, at the very least, [Flynn's] acceptance of responsibility."

The case involved "a high-ranking senior official of the administration making false statements to federal agents while on the premises of the White House," the judge said at the time. "I'm not hiding my disgust, my disdain, for this criminal offense."

Flynn's then-attorney, Robert Kelner, described his client as having cooperated fully with Mueller's investigation and suggested that he still had "something left to give" in the case against Rafiekian. But that testimony never materialized.

Soon afterward, Flynn fired Kelner and hired Powell, a former federal prosecutor and a critic of Mueller and the FBI who took a more combative tack, running afoul of Sullivan.

Powell has filed numerous requests with the court to get the Justice Department to turn over what she says are records showing the FBI sought to entrap Flynn while withholding evidence that could exonerate him. She also argued that prosecutors wanted Flynn to lie in the trial of Rafiekian and that that is why he refused to testify.

"Not only was that demanded testimony a lie, but also, the prosecutors knew it was false, and would induce a breach," Powell said.

The judge shut down that argument, writing in a ruling last month that: "The court summarily disposes of Mr. Flynn's arguments that the FBI conducted an ambush interview for the purpose of trapping him into making false statements and that the government pressured him to enter a guilty plea."