Accessibility links
In Philippines, Volcano Is Quieter, But Officials Renew Warnings For People To Leave In their rush to escape the eruption, many people living near the Taal Volcano have been forced to abandon livestock and pets. Some have defied orders and gone back for them.

In Philippines, Volcano Is Quieter, But Officials Renew Warnings For People To Leave

In Philippines, Volcano Is Quieter, But Officials Renew Warnings For People To Leave 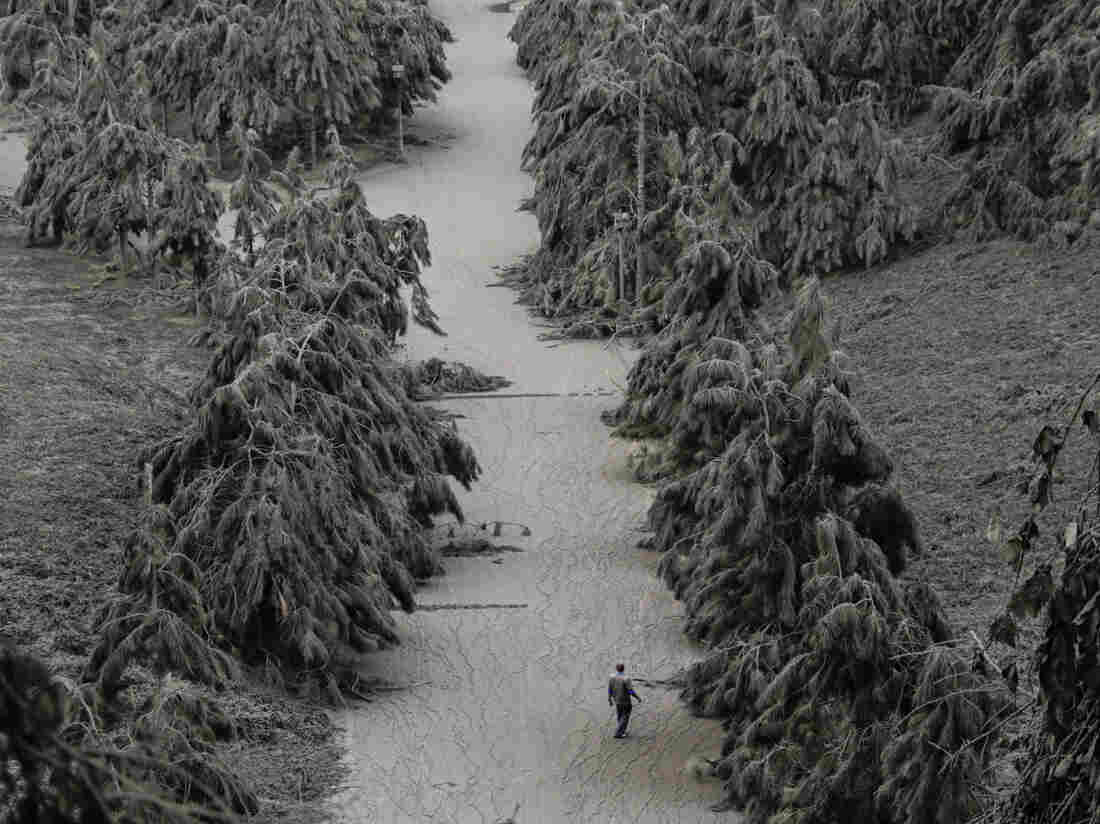 A man walks on a road blanketed with volcanic ash from the erupting Taal Volcano in Tagaytay, Philippines, on Tuesday. Eloisa Lopez/Reuters hide caption 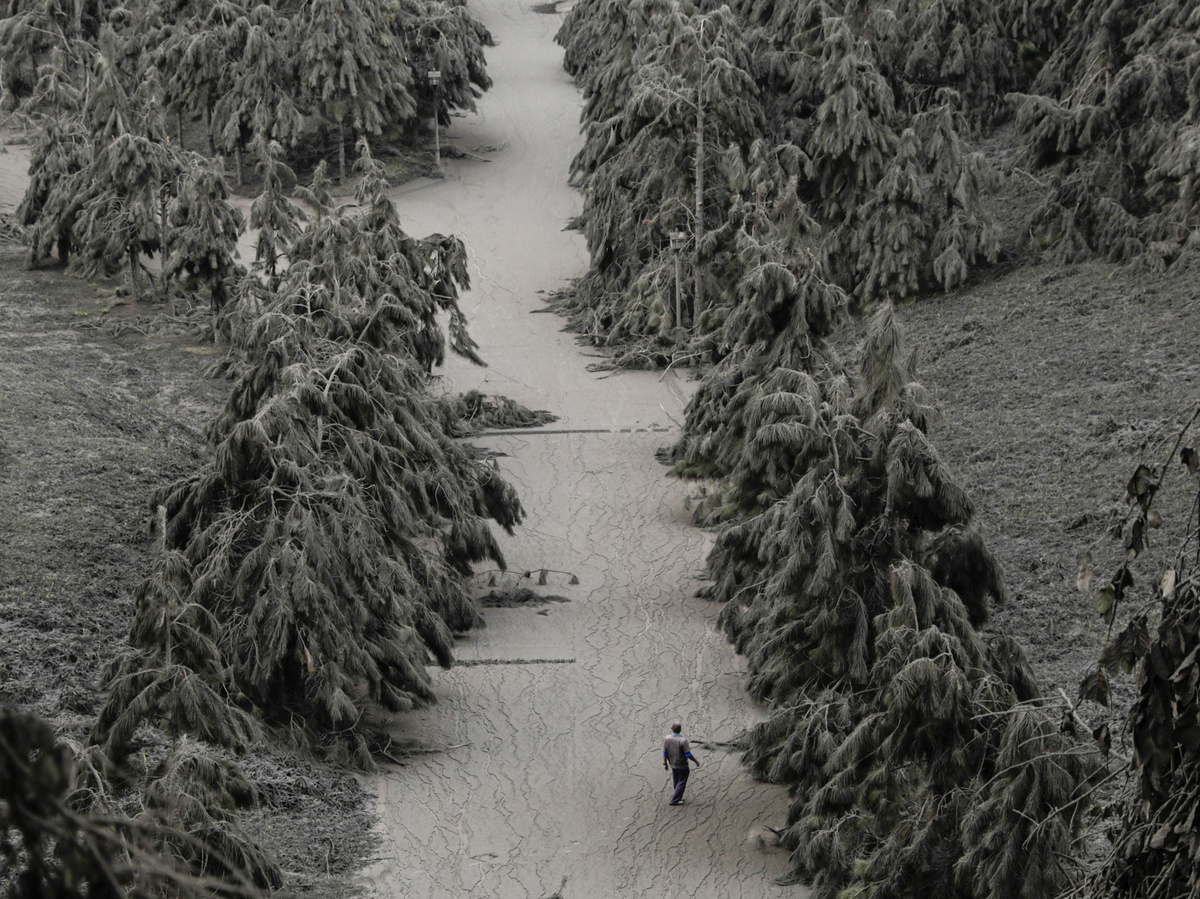 A man walks on a road blanketed with volcanic ash from the erupting Taal Volcano in Tagaytay, Philippines, on Tuesday.

Mass evacuations continued Wednesday in the Philippines under the shadow of a volcanic plume that blotted out the sun and spread ash across much of the country's most populous island.

Since an initial eruption on Sunday, Taal Volcano — located on an island in the middle of a lake just 40 miles south of the capital, Manila, in Batangas province — has spewed ash, dust and noxious sulfur dioxide fumes, forcing tens of thousands of people to abandon their homes.

"It's all in God's hands now," Leonita Gonzales, 52, who fled with the rest of her household from the danger zone around Taal, told Reuters. "We are not sure if we will have a home to return to."

Ash covers Gonzales' land and has wiped out her banana palms. She says she's not sure whether the metal roof on her home can bear the weight of the accumulated ash. 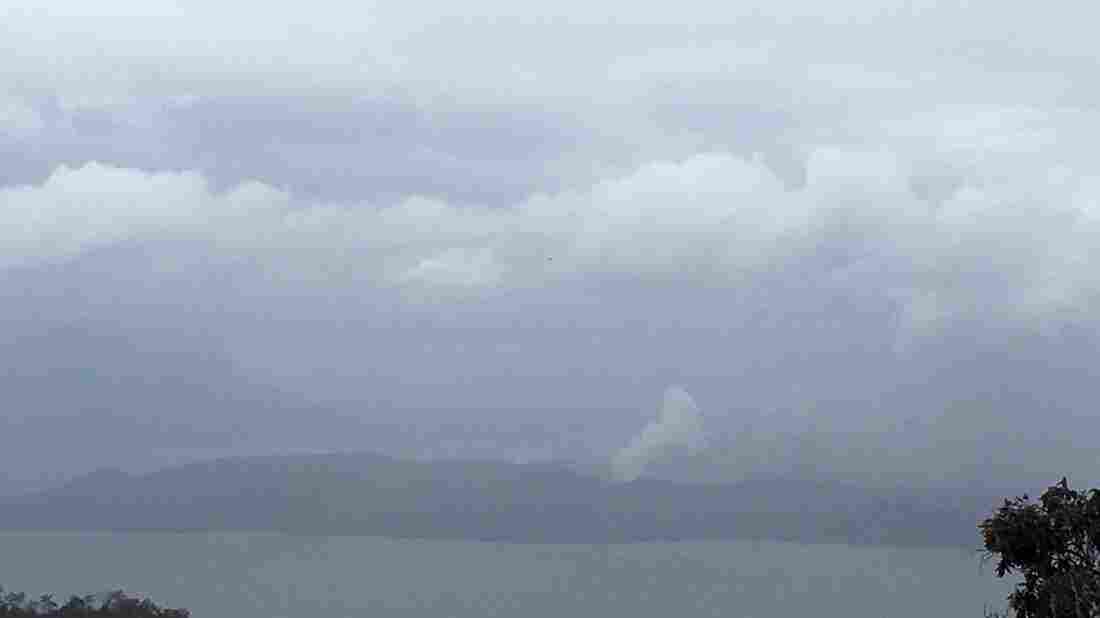 Plumes of steam and gas are visible from across Taal Lake caldera on Wednesday. Julie McCarthy/NPR hide caption 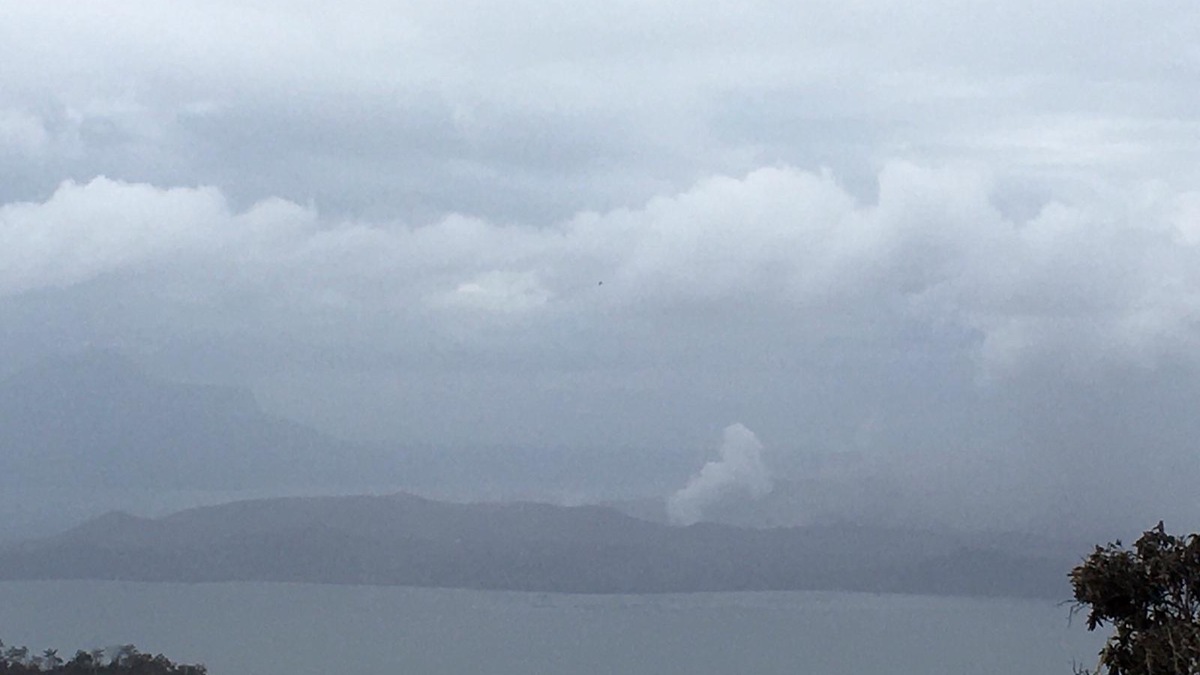 Plumes of steam and gas are visible from across Taal Lake caldera on Wednesday.

Christian Morales, who ignored official warnings and returned to the island where Taal is located to check on his pigs, told The Associated Press, "Almost everything is destroyed."

"If anybody defied orders and stayed behind, he would have been killed without a doubt," he said.

Gonzales and Morales are among nearly 44,000 people who have fled the 9-mile "danger zone" around the volcano, an area that is home to some half-million people.

In their rush to escape the eruption, many people had to abandon livestock and pets — and some, like Morales, have risked going back. 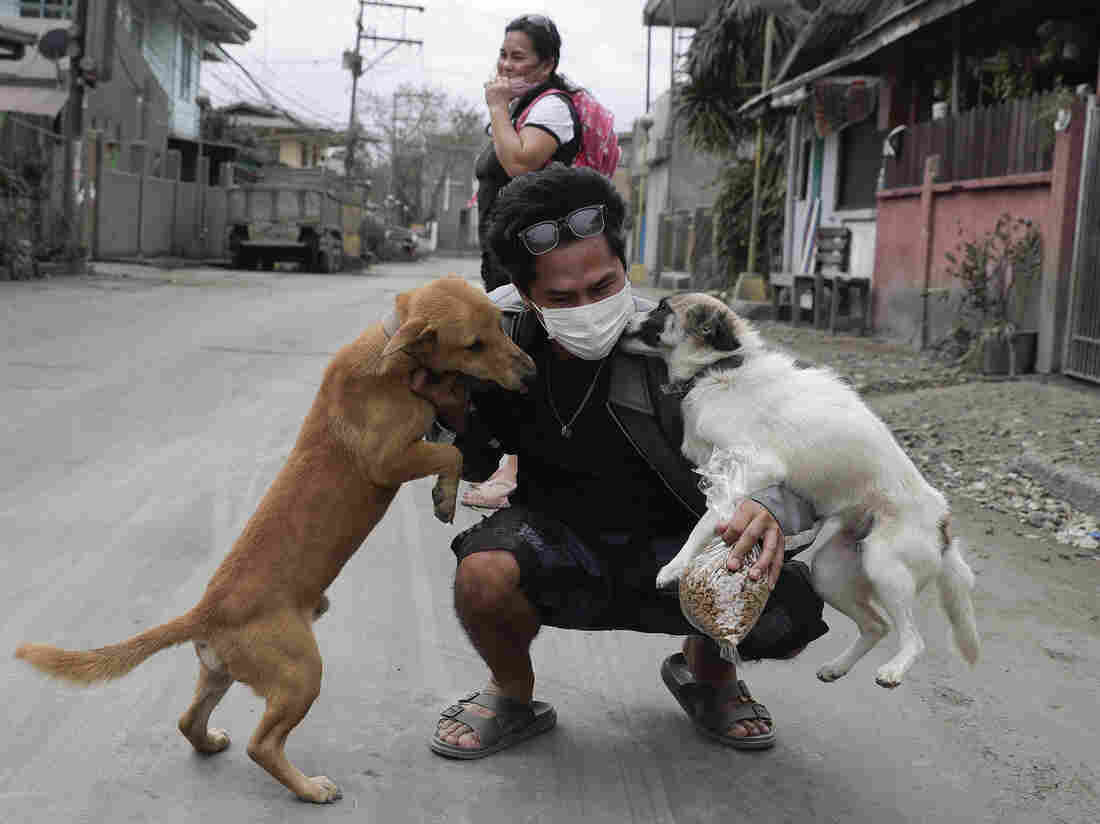 Dogs greet their owner as he returns to check his home at their volcanic ash-covered village in Talisay, Batangas province, on Wednesday. Aaron Favila/AP hide caption 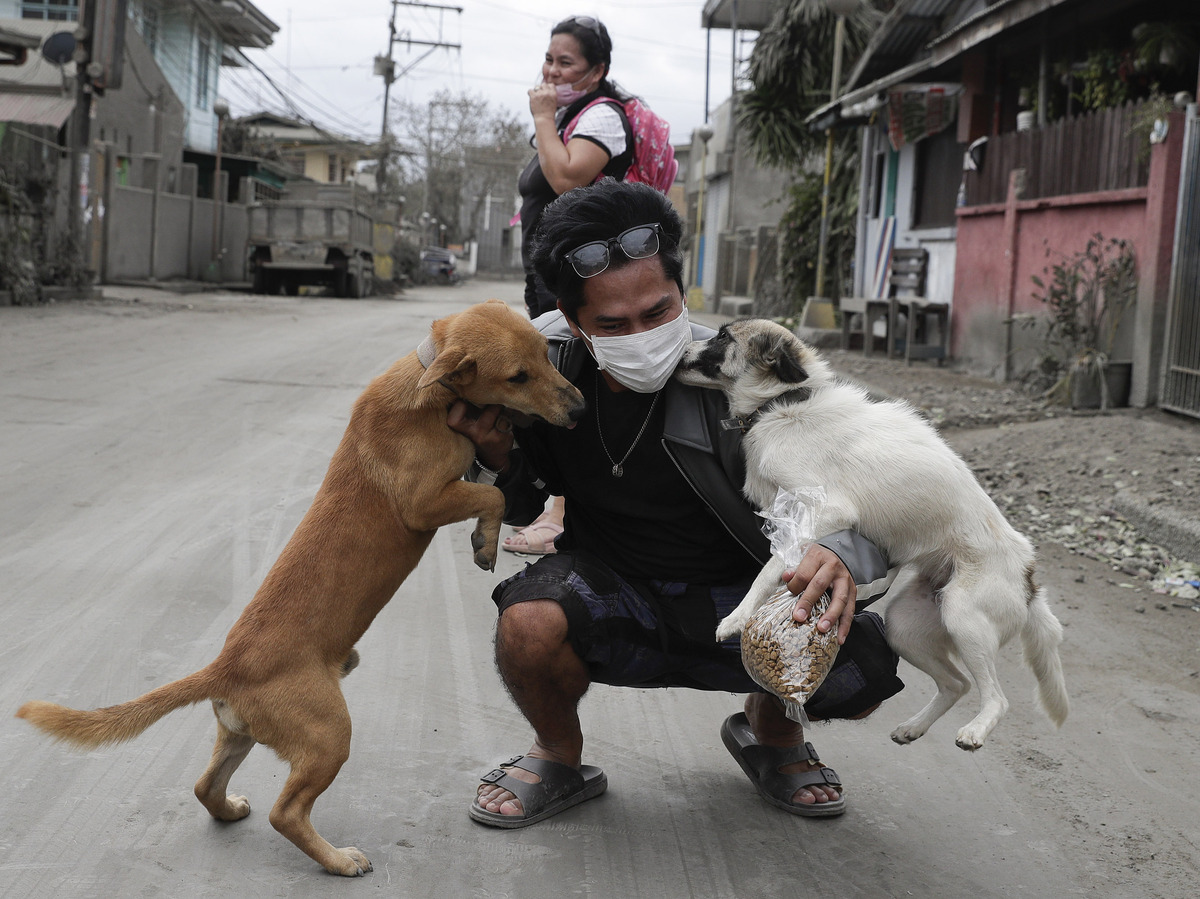 Dogs greet their owner as he returns to check his home at their volcanic ash-covered village in Talisay, Batangas province, on Wednesday.

A group of volunteers has been trying to rescue pets and animals left behind by the evacuees. One volunteer, Kevin Villena, spoke with Rappler, a popular independent news website. For now, he says, they are only trying to get small animals, such as dogs and cats, out of danger.

"We left behind cows," Villena told the website. "We cannot haul them because they might get injured, and their owners will blame us."

WATCH: A group of volunteers brave the danger zone around Taal Volcano to rescue pets and other animals left behind by residents when they evacuated
To help or donate, contact Kevin Villena at 09165855746
Full story: https://t.co/6XCLqUM6AH pic.twitter.com/X7q4cHykN9

He said it has been a challenge to catch the abandoned dogs.

"They are shivering in fear," he said, according to Rappler's translation.

"They're really thirsty and afraid," he said.

So far, no one has been reported killed, but many more are yet to be evacuated. 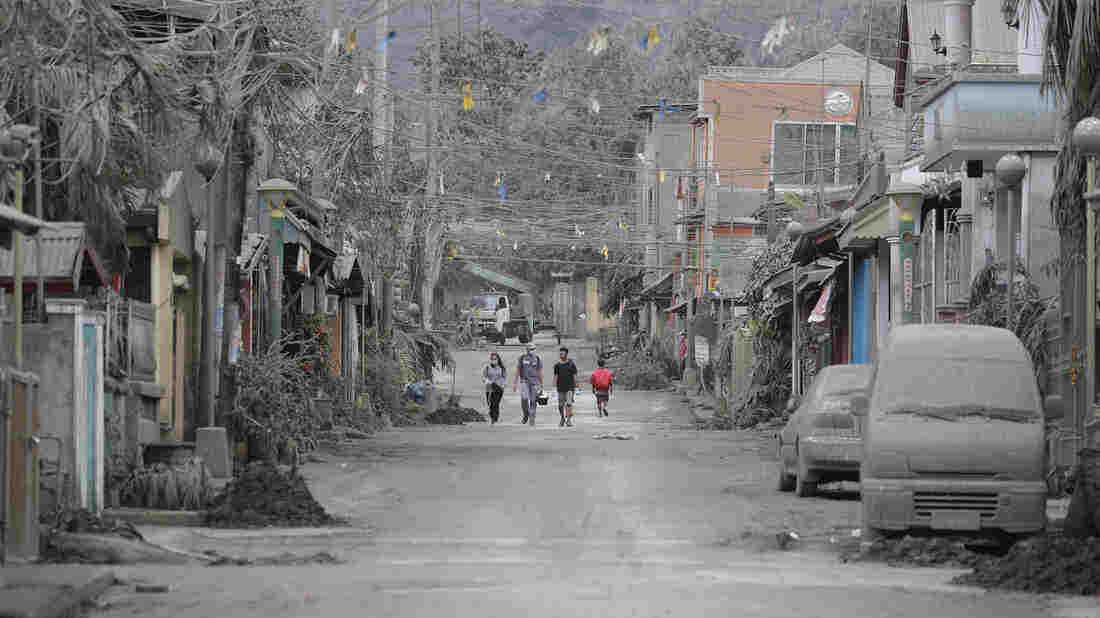 Animal volunteers search for pets left behind by owners at a deserted village in Talisay, Batangas province, on Wednesday. Aaron Favila/AP hide caption 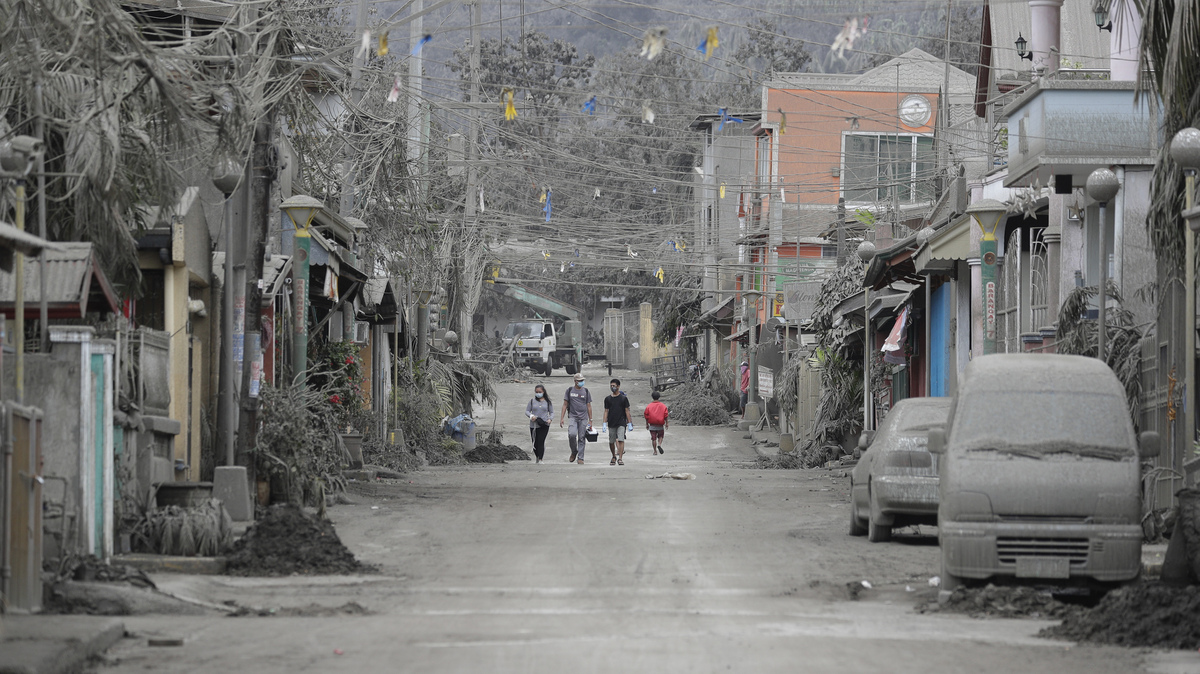 Animal volunteers search for pets left behind by owners at a deserted village in Talisay, Batangas province, on Wednesday.

The director of the Philippine Institute of Volcanology and Seismology, Renato Solidum, says illegal settlements inside Taal's danger zone, which is also part of a protected national park, have been "an accident waiting to happen," adding that his agency has repeatedly warned people not to live there.

The institute said Wednesday that the volcano was displaying "generally weaker" activity, but it kept its alert level at 4 (out of 5), denoting that a "hazardous explosive eruption" is possible within hours or days. Some 466 tremors, which preceded Sunday's eruption and have continued since, are a constant reminder that Taal might have something bigger — and deadly — in store.

"For the past 24 hours, Taal Volcano's activity has been characterized by continuous but generally weaker of the main crater due to magmatic and hydrovolcanic processes," the institute said in its bulletin released at 8 a.m. local time (7 p.m. Tuesday ET).

Sunday's event was classified as a "phreatic," or steam-driven, eruption, but officials are concerned about the possibility of a worst-case "plinian eruption," marked by columns of volcanic debris, including large amounts of pumice and fast-moving and extremely dangerous pyroclastic flows.

The Philippine Institute of Volcanology and Seismology has noted several new fissures in the ground near the volcano, saying they could indicate that magma was rising underground and that another eruption was imminent.

"Such intense seismic activity probably signifies continuous magmatic intrusion beneath the Taal edifice, which may lead to further eruptive activity," the institute said.

Taal is located in hardest-hit Batangas province, which was declared to be under a "state of calamity" earlier this week, but on Wednesday, the adjacent province of Cavite approved a similar resolution, according to the Philippine Star.

The Philippines is situated in an area of increased seismic and volcanic activity known as the "Ring of Fire" that forms a rough circle around the Pacific Ocean where several tectonic plates come together.

Memories of the 1991 eruption of Mount Pinatubo, which killed hundreds of people and blanketed large swaths of the country in thick ash, have been on officials' minds since Sunday's eruption.

"The worst-case scenario is that the volcano will blow up like Mount Pinatubo. That's what we're fearing," Defense Secretary Delfin Lorenzana said Monday.