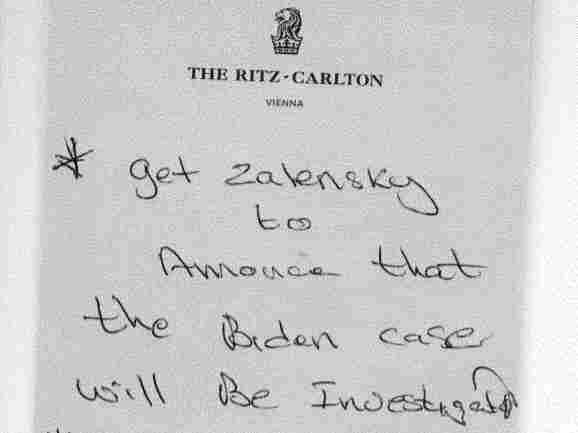 A handwritten note by Rudy Giuliani associate Lev Parnas lists his tasks, starting with getting Ukraine's new president to announce an investigation into "the Biden case." Screenshot by NPR hide caption 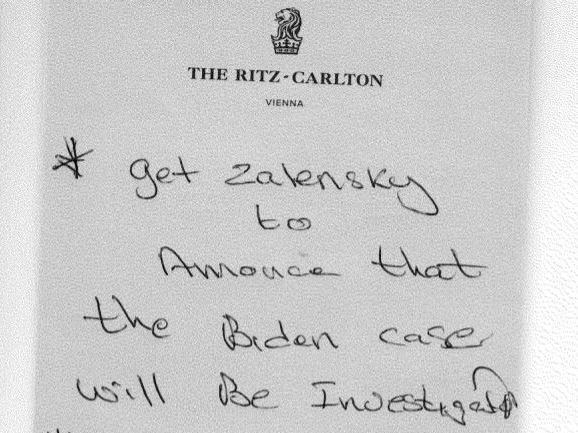 A handwritten note by Rudy Giuliani associate Lev Parnas lists his tasks, starting with getting Ukraine's new president to announce an investigation into "the Biden case."

A lawyer for former U.S. Ambassador Marie Yovanovitch is calling for an investigation after materials released Tuesday night as part of the impeachment inquiry suggested she was under surveillance by individuals linked to President Trump's personal attorney, Rudy Giuliani.

That detail was among a trove of documents provided by Giuliani associate Lev Parnas that were made public by the House Intelligence Committee late Tuesday. The House impeached Trump last month for abuse of office and obstruction of Congress, and lawmakers delivered articles to the Senate Wednesday, where a trial is likely to open next week.

The records provided by Parnas, who has been indicted in New York for alleged campaign finance violations, add to the evidence already released documenting Giuliani's efforts to get the new Ukrainian president, Volodymyr Zelenskiy, to publicly announce an investigation related to former Vice President Joe Biden and his son Hunter Biden, who had ties to a Ukrainian energy company.

Among the documents is a note handwritten by Parnas on stationery from the Ritz-Carlton Hotel in Vienna, in which he appears to list tasks to carry out regarding Ukraine. The note begins with an imperative: "get Zalensky [sic] to Annouce [sic] that the Biden case will Be Investigated."

But it's a string of WhatsApp messages from late March 2019 taken from Parnas' phone that is drawing the most scrutiny. In those texts, Parnas and an associate named Robert F. Hyde, a retired Marine who is running for Congress as a Republican in Connecticut, criticize Yovanovitch, who was still a U.S. ambassador at the time.

"Wow. Can't believe Trumo [sic] hasn't fired this bitch. I'll get right in that," Hyde wrote in an encrypted message to Parnas. He added, "She under heavy protection outside Kiev."

The messages also seem to indicate that Hyde might have been involved in monitoring Yovanovitch and her movements.

"They are moving her tomorrow," Hyde later wrote, quickly followed by, "The guys over they asked me what I would like to do and what is in it for them."

Hyde said Yovanovitch had turned off her phone and computer, and that his associates in Ukraine would give updates on the ambassador's movements. He added, "They are willing to help if we/you would like a price ... Guess you can do anything in the Ukraine with money ... what I was told."

Two days later, on March 29, Hyde wrote, "It's confirmed we have a person inside."

Parnas said Wednesday in an interview with Rachel Maddow on MSNBC that he never took Hyde seriously and his replies were intended to mollify him.

Parnas said in the interview that he regretted being part of the chain of events that ended with Yovanovitch being removed as ambassador.

In a a flurry of comments Wednesday, Hyde said he has never been to Kyiv and that the highlighted exchange was all in fun and had been misconstrued.

"How low can liddle Adam Bull Schiff go?" Hyde asked in a posting to both Twitter and Facebook. He later added, "For them to take some texts my buddy's and I wrote back to some dweeb we were playing with that we met a few times while we had a few drinks is definitely laughable."

Hyde then used some off-color language to describe Schiff and added, "Have fun with your witch-hunt liddle Schiff."

About two months after the WhatsApp exchange, President Trump abruptly recalled Yovanovitch from her post. He has repeatedly vilified the ambassador, at one point telling Zelenskiy over the phone that "things were going to happen to her," according to an account released by the White House.

Yovanovitch was asked about that comment during her testimony during the House impeachment hearings in November. "I saw it as a threat," she replied.

In response to the newly released Parnas documents, Yovanovitch's attorney, Lawrence S. Robbins, issued a statement on his client's behalf: "Needless to say, the notion that American citizens and others were monitoring Ambassador Yovanovitch's movements for unknown purposes is disturbing. We trust that the appropriate authorities will conduct an investigation to determine what happened."

The exchange between Parnas and Hyde is "profoundly alarming," says Democratic Rep. Eliot Engel of New York, who chairs the House Committee on Foreign Affairs.

Citing the possible risk to Yovanovitch's security in Kyiv, Engel issued a statement Wednesday saying he will send the State Department a formal request for information and a briefing related to the revelations.

"This unprecedented threat to our diplomats must be thoroughly investigated and, if warranted, prosecuted to the fullest extent of the law," Engel said.

NPR has also sought comment from the State Department's Bureau of Diplomatic Security, which had not responded as of late Wednesday morning.

The House documents also include a record of a previously undisclosed letter Giuliani sent to Zelenskiy on May 10, 2019, urgently seeking a meeting following the Ukrainian president's election victory. In it, Giuliani said he was reaching out as Trump's personal attorney and "with his knowledge and consent."

Signed by Giuliani, the one-page letter reads in part:

"I am private counsel to President Donald J. Trump. Just to be precise, I represent him as a private citizen, not as President of the United States. This is quite common under American law because the duties and privileges of a President and a private citizen are not the same. Separate representation is usual process. [...]

"However, I have a more specific request. In my capacity as personal counsel to President Trump and with his knowledge and consent, I request a meeting with you on this upcoming Monday, May 13th or Tuesday, May 14th."

The letter fell into the committee's hands because it was on Parnas' phone: he texted a copy of the letter to one of Zelenskiy's aides, in an attempt to bolster Giuliani's approach to the newly elected leader.

In releasing the documents, House Intelligence Committee Chairman Rep. Adam Schiff wrote, "Giuliani's letter makes clear that his trip, which he publicly described at the time as an effort to 'meddle in an investigation,' was undertaken with the knowledge and support of President Trump."

Schiff sent a flash drive containing the materials to House Judiciary Chairman Rep. Jerry Nadler as part of the accumulation of evidence in the impeachment inquiry. In a letter describing the contents, Schiff said he was also sending a second flash drive in a sealed envelope, adding that it includes "sensitive personal information that should be protected from public disclosure."

NPR's Ryan Lucas and Michele Kelemen contributed to this report.