Accessibility links
Ukraine Is Investigating Whether U.S. Ambassador Yovanovitch Was Surveilled Ukraine's Internal Affairs Ministry says it's asking the FBI to help determine whether international laws were broken, or "whether it is just a bravado and a fake information" from a U.S. politician. 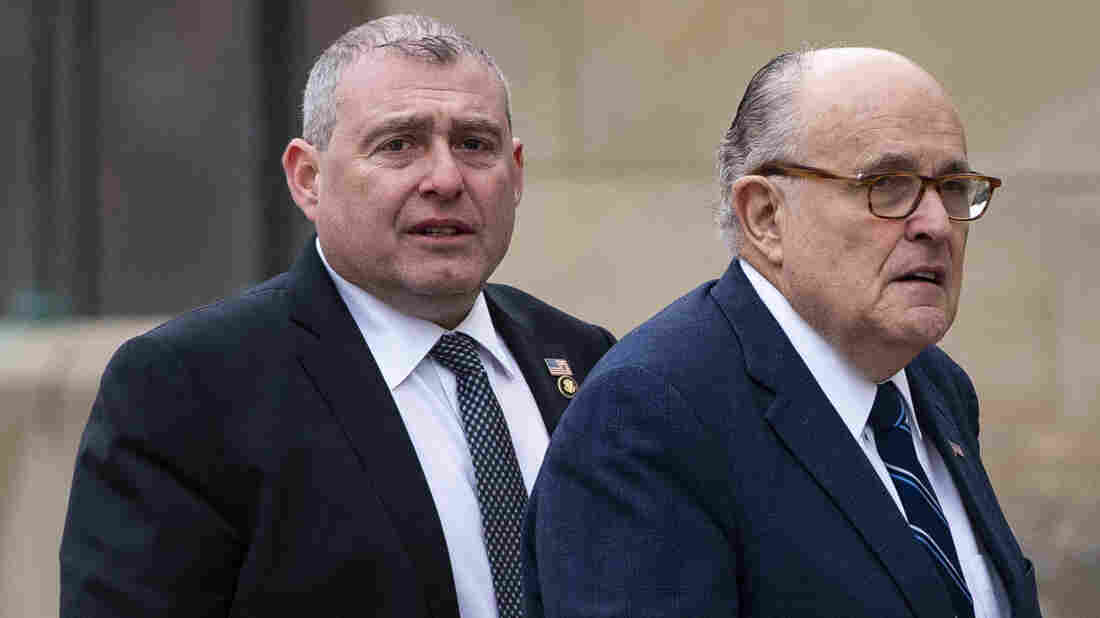 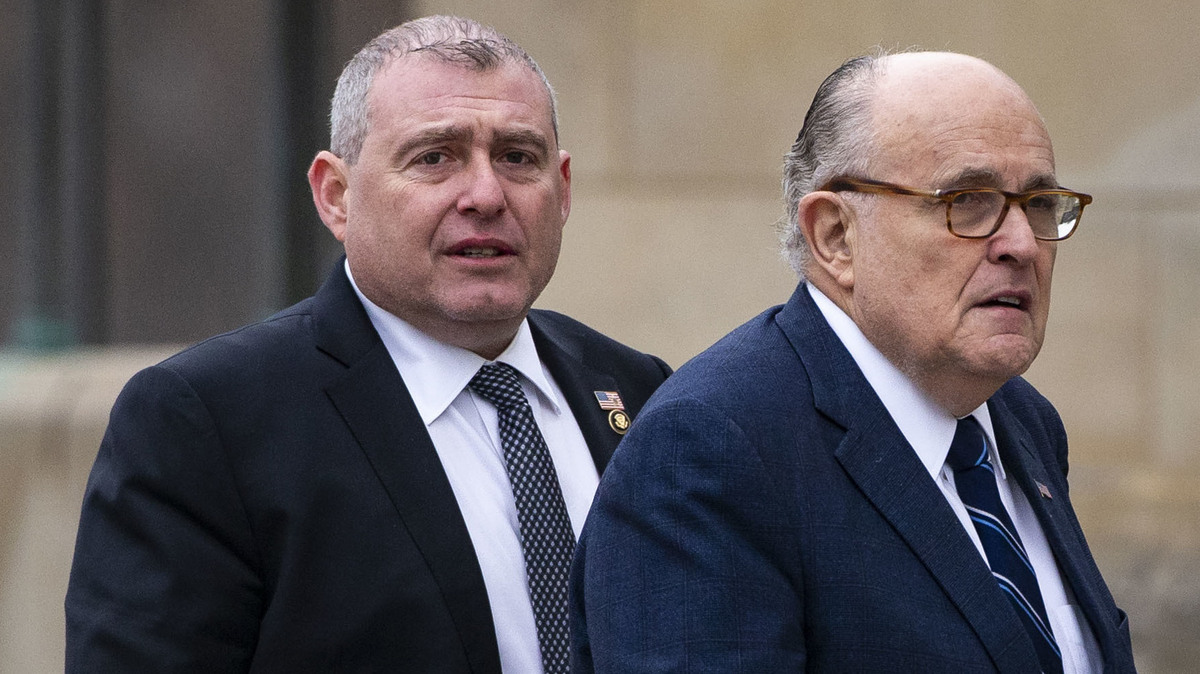 Lev Parnas (left) says text messages last year between him and congressional candidate Robert Hyde about surveilling former Ambassador Marie Yovanovitch were taken out of context. But Ukrainian police are investigating the allegations.

Ukraine's national police are investigating whether U.S. Ambassador Marie Yovanovitch was under surveillance in Kyiv last spring — something implied in a series of WhatsApp messages between a little-known Republican political candidate and an associate of Rudy Giuliani, President Trump's personal lawyer.

"Ukraine cannot ignore such illegal activities on the territory of its own state," the Ministry of Internal Affairs of Ukraine said in a statement Thursday. The ministry says it's asking the FBI to assist in its inquiry.

The texts made public between Lev Parnas and Robert F. Hyde, a Trump supporter and retired Marine who is running for Congress in Connecticut, suggested Yovanovitch was being monitored both electronically and in person, in an apparent breach of diplomatic security.

"They are moving her tomorrow," Hyde wrote in one message. He added, "The guys over they asked me what I would like to do and what is in it for them."

Ukrainian authorities say the implication that an ambassador was "under illegal surveillance and her electronic gadgets were interfered [with] by the private persons at the request of the US citizens" suggests a possible violation of its own laws as well as the Vienna Convention on Diplomatic Relations, which protects diplomats on foreign soil.

The texts were part of a cache of documents released Tuesday night by House Intelligence Committee Chairman Rep. Adam Schiff (D-Calif.), who said the messages were collected from Parnas' phone as Democrats compiled evidence to support Trump's impeachment on charges of abuse of power and obstruction of Congress.

In one message, Hyde told Parnas that Yovanovitch had turned off her phone and computer and that his associates in Ukraine would send updates on the ambassador's movements. He added, "They are willing to help if we/you would like a price ... Guess you can do anything in the Ukraine with money ... what I was told."

Hyde did not provide details about where he was getting his information about Yovanovitch, other than citing "my guy." After the conversation became public, Hyde insisted he had been toying with Parnas, saying his comments were taken out of context.

Referring to House Democrats, Hyde wrote on social media: "For them to take some texts my buddy's and I wrote back to some dweeb we were playing with that we met a few times while we had a few drinks is definitely laughable."

Parnas has been indicted in New York for alleged campaign finance violations and has pleaded not guilty. He is a close associate of Giuliani, who sought a meeting with newly elected Ukrainian President Volodymyr Zelenskiy last year, and who has said he was working on Trump's behalf in Ukraine.

On Wednesday night, Parnas sought to portray his exchanges with Hyde in a similar light. In an interview with Rachel Maddow on MSNBC, Parnas said he never took Hyde's texts seriously.

Ukraine's Internal Affairs Ministry says the national police "has initiated criminal proceedings" to investigate two potential crimes: violating the secrecy of telephone conversations and other communications, and the unlawful collection of confidential personal information, in a breach of privacy.

Ukraine says its minister of Internal Affairs, Arsen Avakov, has asked the FBI to take part in the investigation — and to share "all the information and materials" it has about people who may have broken the law. But Ukraine also noted that it's possible no illegal surveillance ever took place.

"Our goal is to investigate whether there actually was a violation of Ukrainian and International law, which could be the subject for proper reaction," the ministry noted. "Or whether it is just a bravado and a fake information in the informal conversation between two US citizens."

The investigation adds yet another wrinkle to a U.S.-Ukraine relationship that's become increasingly complicated since last summer, when Trump asked the Ukrainian president to help investigate former Vice President Joe Biden and his son, Hunter. Trump and his supporters also repeatedly vilified Yovanovitch, who was abruptly recalled from her post roughly two months after Hyde discussed her movements with Parnas.

In another development involving Ukraine, the Government Accountability Office, a federal watchdog, said Thursday that the Trump administration broke the law when it withheld roughly $214 million in U.S. security assistance funds from Ukraine last summer.

"Faithful execution of the law does not permit the President to substitute his own policy priorities for those that Congress has enacted into law," the GAO said.

As NPR's Ayesha Rascoe reports, "The White House has said previously that it believed Trump was acting within his legal authority."

In his interview with MSNBC's Maddow, Parnas said he believes that withholding U.S. aid from Ukraine was Trump's idea. He also alleged that several high-profile figures in the Trump administration, including Vice President Pence, knew the president had made it a top priority for Zelenskiy to announce an investigation into the Bidens. When Pence visited Ukraine's president last September, Parnas said, Pence's mission was "to get it straightened out, that Zelenskiy was supposed to make another announcement."

When NPR's Tamara Keith asked the vice president's office for a response to Parnas' claim about his role, Marc Short, Pence's chief of staff, sent a statement saying, "This is very simple: Lev Parnas is under a multi-count indictment and will say anything to anybody who will listen in hopes of staying out of prison. It's no surprise that only the liberal media is listening to him."

President Trump had a similar response later Thursday, telling reporters that Parnas was "trying to probably make a deal for himself."

Trump also reiterated his previous statements that he doesn't recall having conversations with Parnas — who told Maddow that he has spoken to Trump and been around him on numerous occasions.

"I know nothing about him," Trump told reporters at the White House. He later added, "I take thousands and thousands of pictures with people, all the time."