Accessibility links
Casper IPO: Company Pays A Price For Generous Mattress Returns Casper changed mattress shopping with the promise of a 100-night "risk-free" trial and easy returns. Now the cost of those returns is being scrutinized as the online company prepares to go public. 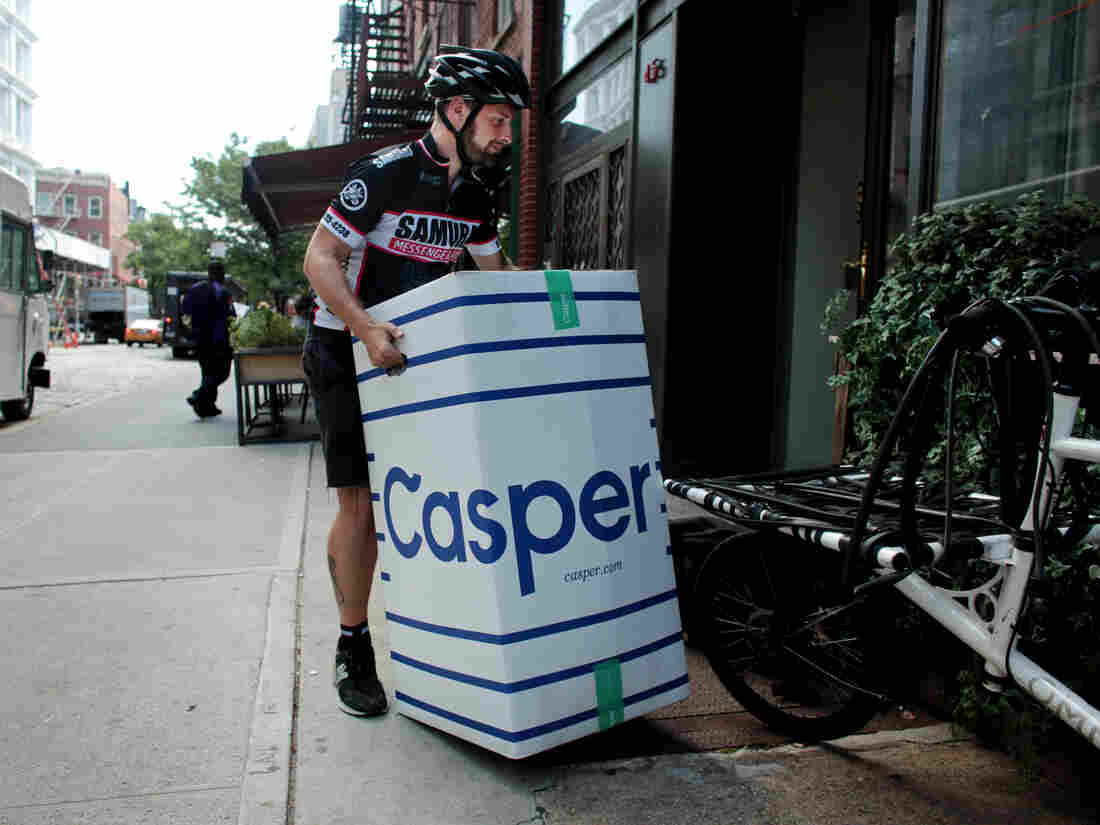 Casper changed mattress shopping with the promise of a 100-night "risk-free" trial and easy returns. Now the cost of those returns is being scrutinized as the online company prepares to go public. Yana Paskova/The Washington Post via Getty Images hide caption 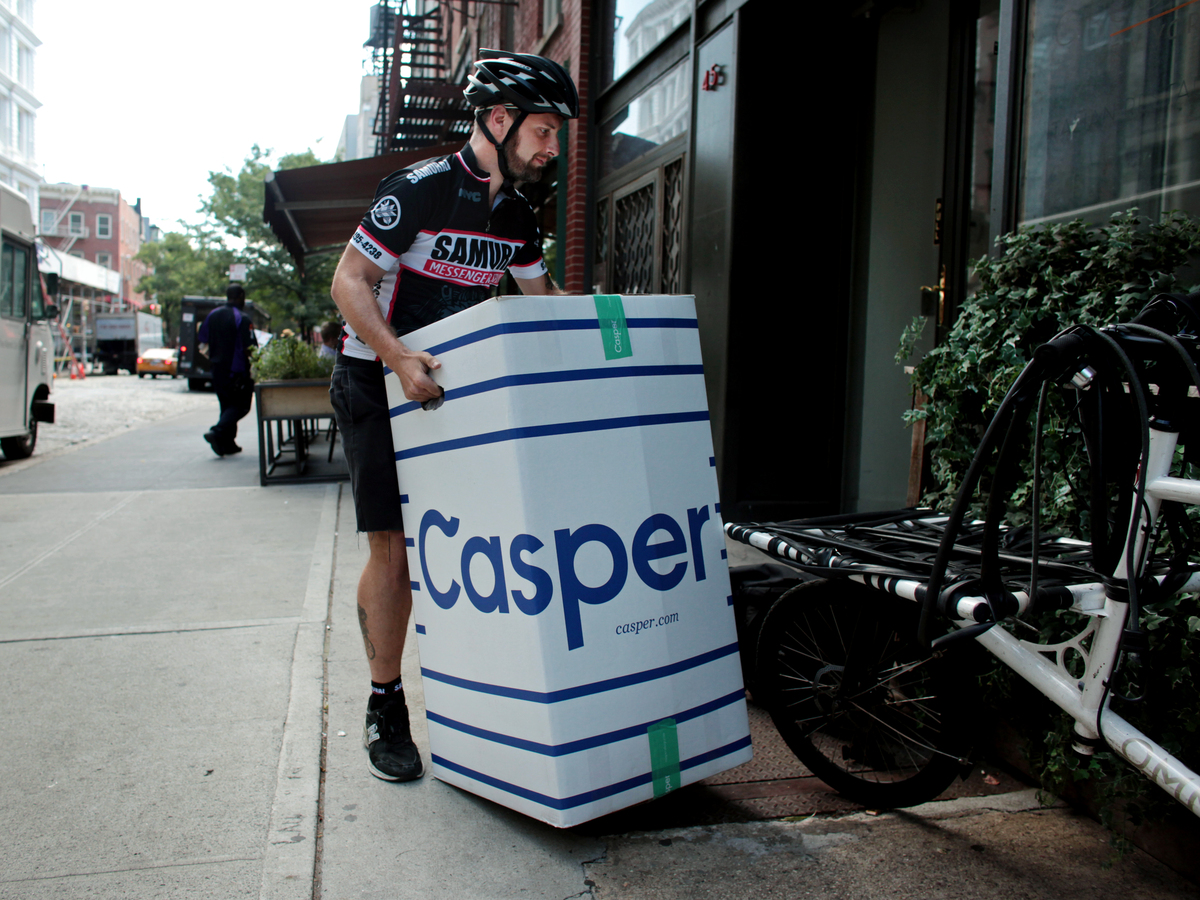 Casper changed mattress shopping with the promise of a 100-night "risk-free" trial and easy returns. Now the cost of those returns is being scrutinized as the online company prepares to go public.

There's no free lunch, economists will say. So when a company says, sleep on a mattress for a few months and return it for free — that actually costs money.

That question is now in the spotlight as online mattress seller Casper plans to go public. The decision forced Casper to disclose eye-popping losses: more than $92 million in 2018.

This has become a familiar story of a startup. Casper is a dominant online brand that's growing faster than its peers, according to Rakuten Intelligence. And it's investing heavily in marketing and opening physical stores.

But another big cost at Casper is "refunds, returns and discounts," worth almost $81 million in 2018.

Mattress No Longer Relegated To Bottom Of Shopping List

"This was long suspected that Casper is losing money," said David Perry, executive editor and mattress writer at Furniture Today. "The number I really would like to see is what is the return percentage [of Casper's mattresses]. Spoiler alert: I'm still looking."

The company did not disclose how many of its mattresses get returned. It also did not respond to NPR's inquiry.

"My educated guess is that Casper's return rate would put it somewhere in the 12% to 14% rate," said Michael Magnuson of GoodBed.com, who's done detailed analysis of industry costs.

That would mean roughly 1 out of 8 Casper mattresses might be sent back. That's pretty average for an online purchase — with one major difference.

"Unlike those shoes that you send back," Magnuson said, "this mattress that you're not going to keep — will never be resold."

Casper wasn't the first company to sell mattresses on the Internet. And it wasn't the first to squish giant bedding into a box for cheaper shipping. Casper's success story was about changing how people think about shopping for a mattress, persuading them to buy an item they'd sleep on for years sight unseen.

The free trial of "100 nights risk-free" and a generous returns policy were two of Casper's most revolutionary moves.

"Essentially, mattresses are layers of foam, or they're layers of foam and springs. And they're a blind purchase; you can't look inside the mattress," Perry said. "One of the key differentiators in the online space is the marketing."

And Casper founders spent hundreds of millions of dollars on marketing — all with their stated goal of becoming "the Nike of sleep."

They drew in celebrity investors like rapper Nas and actor Leonardo DiCaprio. They flooded podcasts, websites and the New York subway with quirky, punny ads. They launched mediation audio streaming, "nap mobiles" and $25 45-minute naps at "The Dreamery" in New York, a magnet for YouTubers and Instagrammers — whose posts create free social promotion.

Why Are There So Many Mattress Stores?

Before Casper, few mattress companies did free returns. "They came up with the innovation that said we're going to donate it — we're going to eat the costs entirely," Magnuson said.

Casper co-founder Neil Parikh told Inc. in a 2016 interview that the company tries to donate returned mattresses to local charities, "which is more cost-effective than taking them back halfway across the country to refurbish and resell."

In its filing to go public, Casper addressed the issue of returns, saying:

"As a young company, we are still learning about the factors affecting customer returns and believe we have the opportunity to reduce customer return rates. We have identified several opportunities that span policy change, process improvement and consumer education to reduce return rates and increase overall customer satisfaction."

Companies aren't allowed to sell used mattresses as new. And, of course, donations offer a bit of a tax write-off. But these days, there are 175 online mattress brands in Casper's wake, according to Perry. Many have replicated Casper's generous returns policy.

"Given all the mattresses that are being sold online, the donation ecosystem is feeling pretty full, I think, at the moment," Magnuson said.

He says he has been concerned lately as more and more people write to him, for example: "I've tried these three mattresses, and none of them have worked."

"That could literally mean," Magnuson says, "that essentially four mattresses got made — three of which theoretically could have ended up in a landfill — just to get that one household the mattress that they want."

As Casper prepares its initial public stock offering, it's likely to continue facing the question of whether this problem keeps its executives up at night.

Editor's note: Casper is one of NPR's financial supporters.