Accessibility links
The 2020 Women's March Attempts To Overcome Its Troubled Past For the fourth year, the anti-Trump Women's March will stage events in Washington, D.C., and other places. After years of controversy, the group now has new leadership and a new focus. 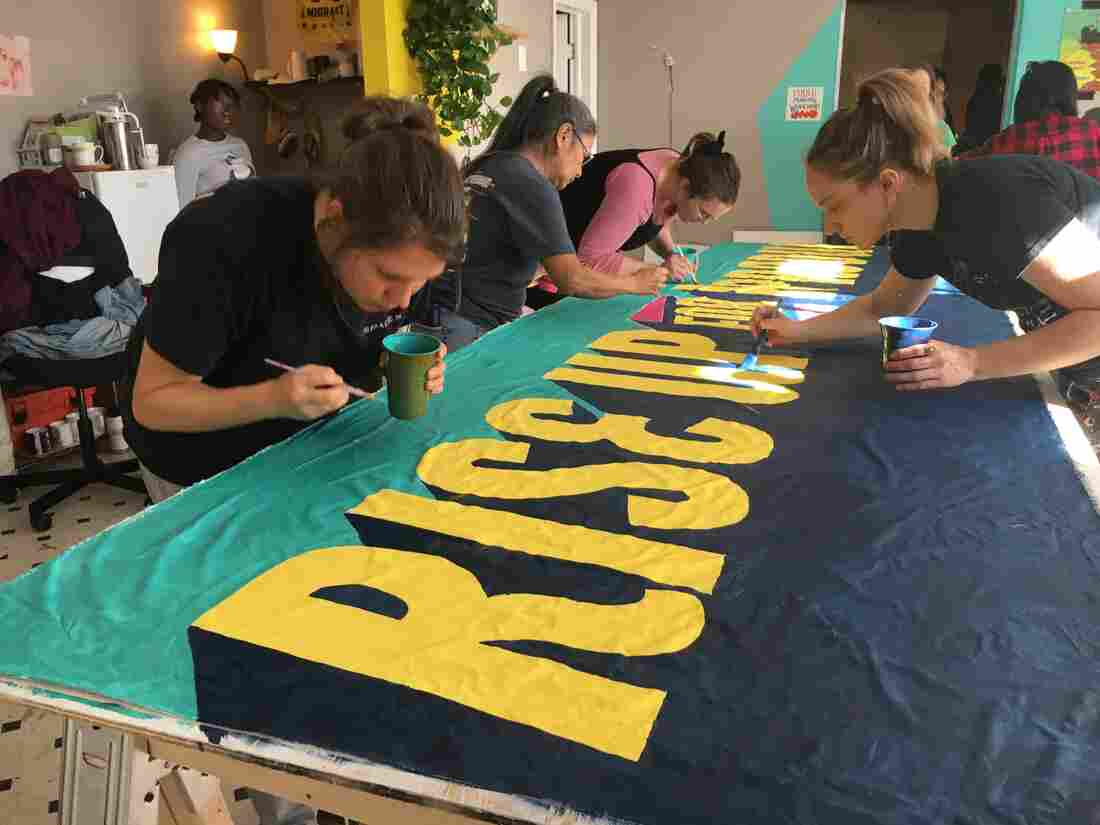 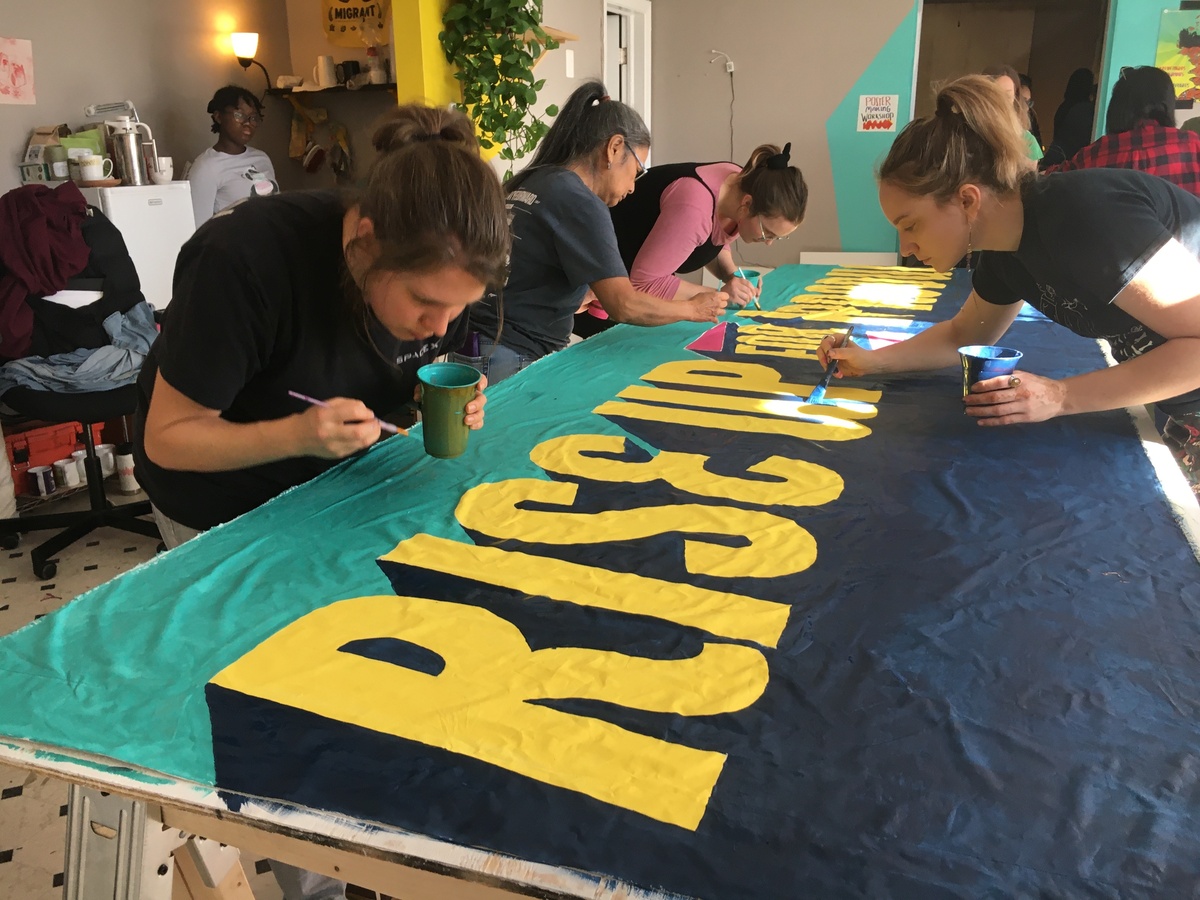 Volunteers paint a banner for the front of the demonstration. Organizers hosted the event to bring supporters together ahead of this year's Women's March, scheduled for Saturday.

Unlike the friend she accompanied to the event, Coomber did not participate in any of the previous anti-Trump demonstrations. Three years ago, the first march drew hundreds of thousands of people to the nation's capital and hosted sister marches in cities around the world.

But the Women's March has struggled since then, facing controversy for some of its leadership and criticism for being a space for primarily white, cisgender women. Last year, three founding members stepped down following allegations of anti-Semitism, and a new, bigger board took their place.

Now, the Women's March is back on Jan. 18 with a restructured lineup and mission — and some people who did not feel enticed to join in the past are giving it a second chance.

"When we're talking about women's rights, I feel like black women or women of color are usually left out of that conversation," Coomber said. "But I think not going, not representing people like me, doesn't help anything. I'm trying to have a change of heart."

The community art build that Coomber attended is part of the organization's goal to foster deeper partnerships with existing movements. After polling its base of supporters, the Women's March decided to focus on three main topics for this year's events: climate, reproductive justice and immigrants' rights.

Every night in the week leading up to the march itself, the organization has hosted panel discussions with activists from those fields. And on Saturday, there will no longer be a stage for the organizers and high-profile celebrities. Instead, the new leaders will march alongside everyone else, and Chilean collective LasTesis will lead the group in a rendition of its viral protest anthem, "Un Violador En Tu Camino" ("A Rapist In Your Path"). 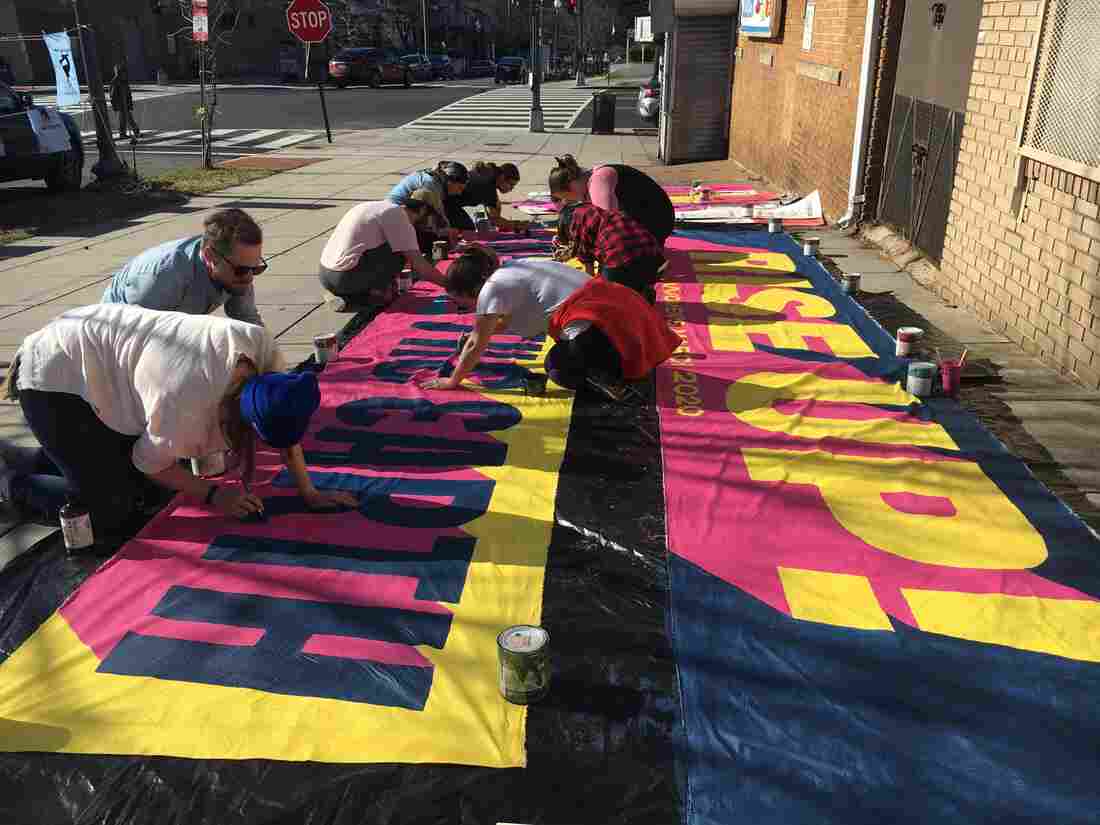 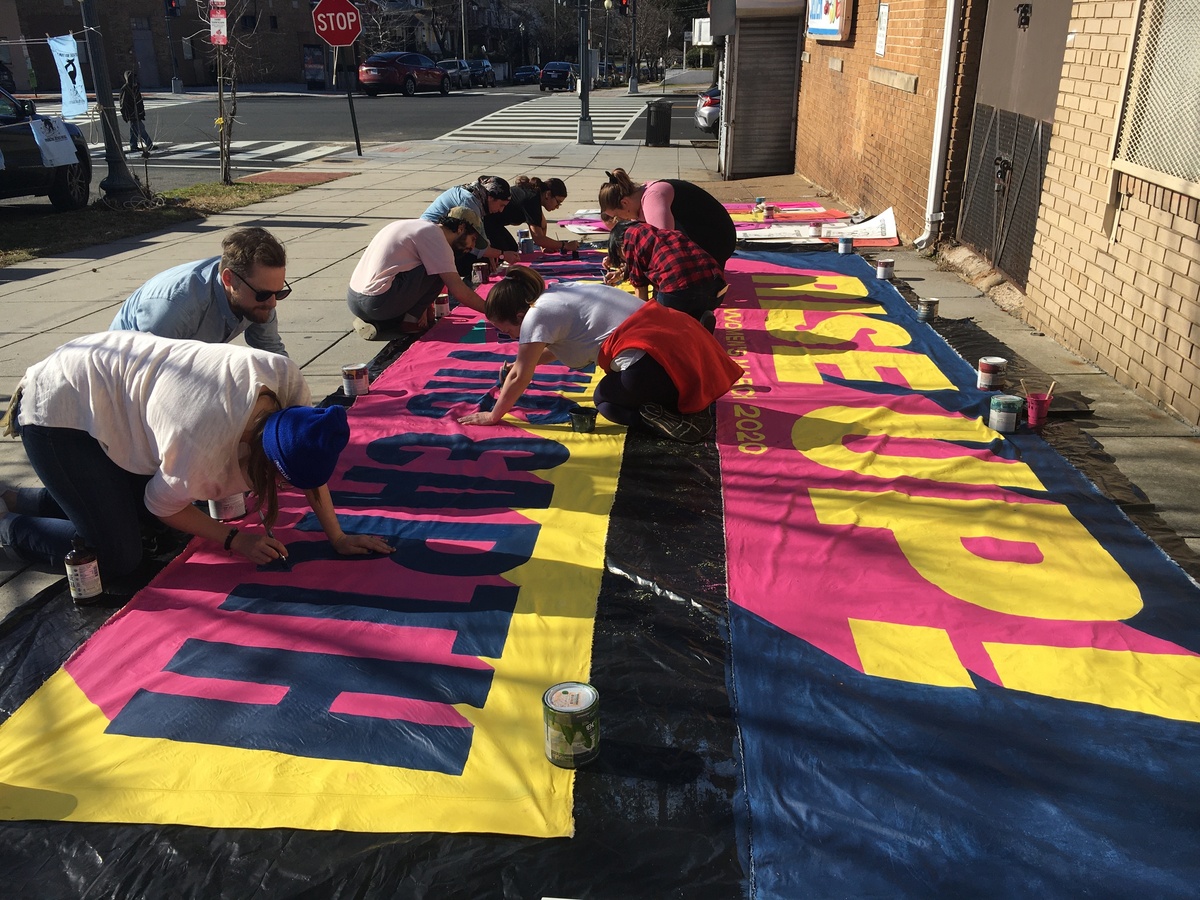 This year's Women's March will focus on climate, reproductive justice and immigrants' rights.

"It just felt like the political moment is with the people — and you see that not just with our country but around the globe with a lot of people coming out and taking the streets," Rachel O'Leary Carmona, the Women's March chief operating officer, said about the decision to nix the stage. "It just felt like it was a time to be shoulder to shoulder with folks and be where the power is."

The crowd, however, will be smaller this year than in the past. The permit filed with the National Park Service allows for up to 10,000 protesters.

Photos: The Women's March In Washington

Celeste Montoya, who teaches gender studies and mobilizations at the University of Colorado Boulder, says it's normal for social movements to lose steam over time — but she's not sure the Women's March is still as necessary as it was in 2017.

"In that first march, it was just kind of what a Trump presidency might materialize into, and since then, a lot of those threats have materialized," she said. "Whereas before it was kind of a collective perception of threat, now there are really specific things to mobilize on."

Protests surrounding climate, immigrants' rights and the #MeToo movement have taken off on their own since the first Women's March. And yet, some people continue to be drawn to the large-scale demonstration that made a big splash following the 2016 election. 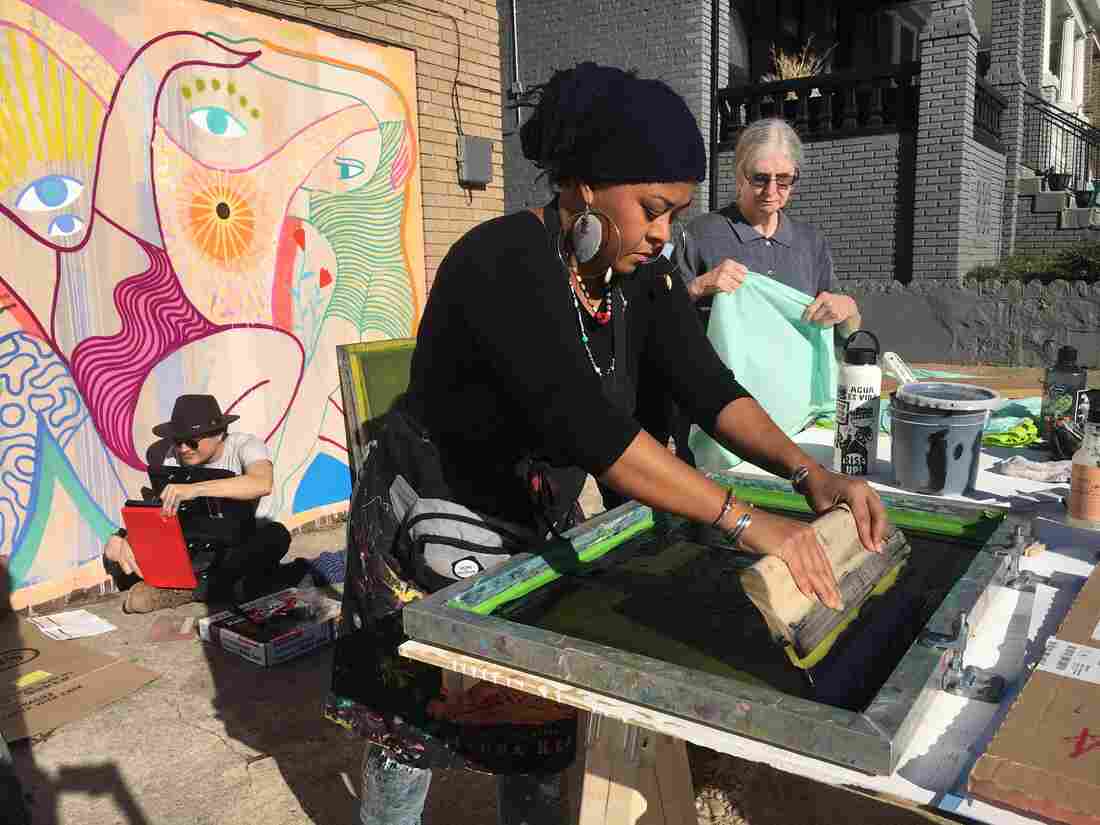 Crystal Clarity, an art director for the march, teaches volunteers how to screen-print posters for the march. Isabella Gomez Sarmiento/NPR hide caption 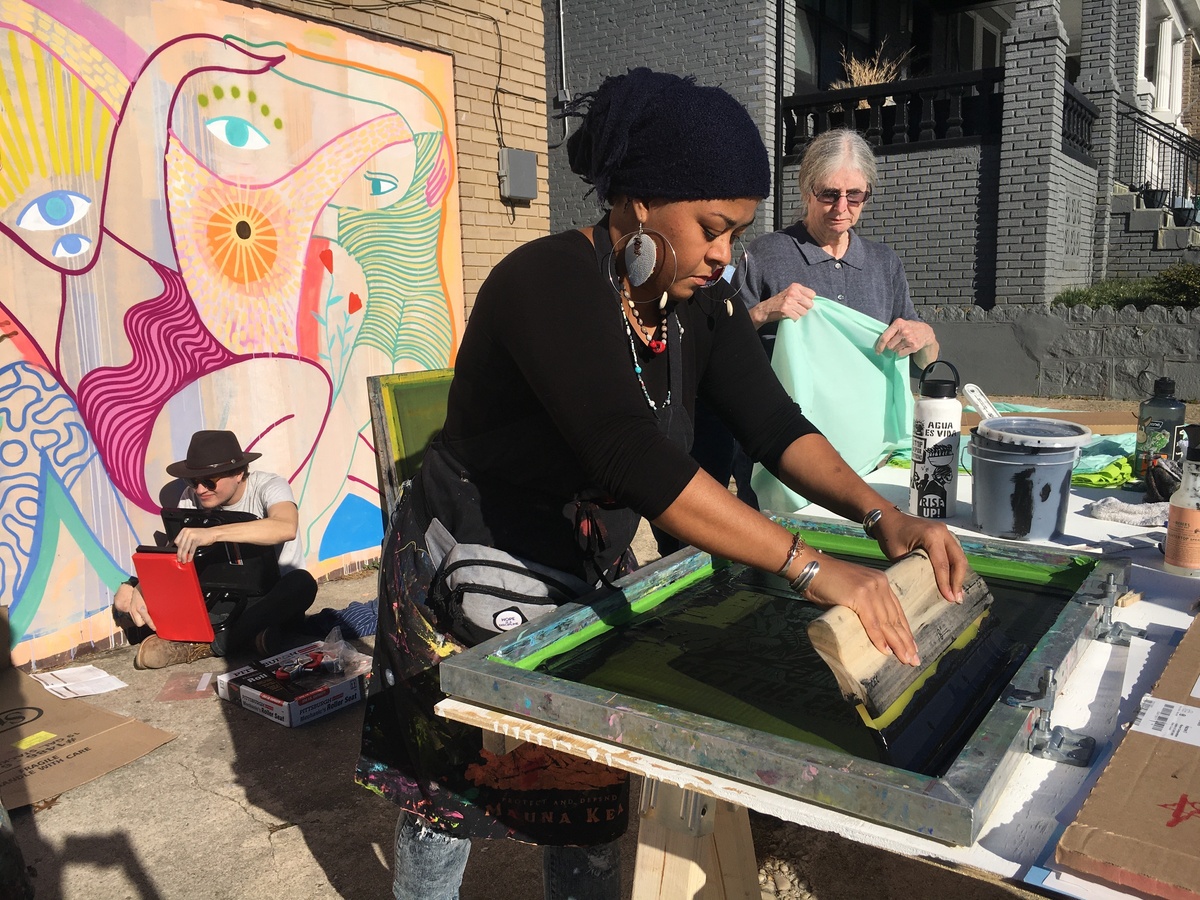 Crystal Clarity, an art director for the march, teaches volunteers how to screen-print posters for the march.

Artist Crystal Clarity did not march in past years because she chose to focus her energy on local issues in Brooklyn, where she lives. But this year, she accepted the opportunity to help direct the artwork for the D.C. march — and she's already looking ahead at what comes after Saturday.

"My experience with mobilizations and marches in general is that it's not enough to take the streets; we kind of have to keep it. We have to keep the streets," she told NPR. "Real permanent change doesn't happen with one-day events."

Carmona agrees. She says she feels like now more than ever, women need to band together across social movements and show up for one another.

"This march is the last march before the 2020 presidential election, and literally everything that we love is on the line," she said.