Accessibility links
Reporters Challenge New Restrictions In Trying To Cover Senate Impeachment Trial Authorities are cracking down on the places correspondents may go, with whom they may talk and for how long. News outlets don't want to go along. 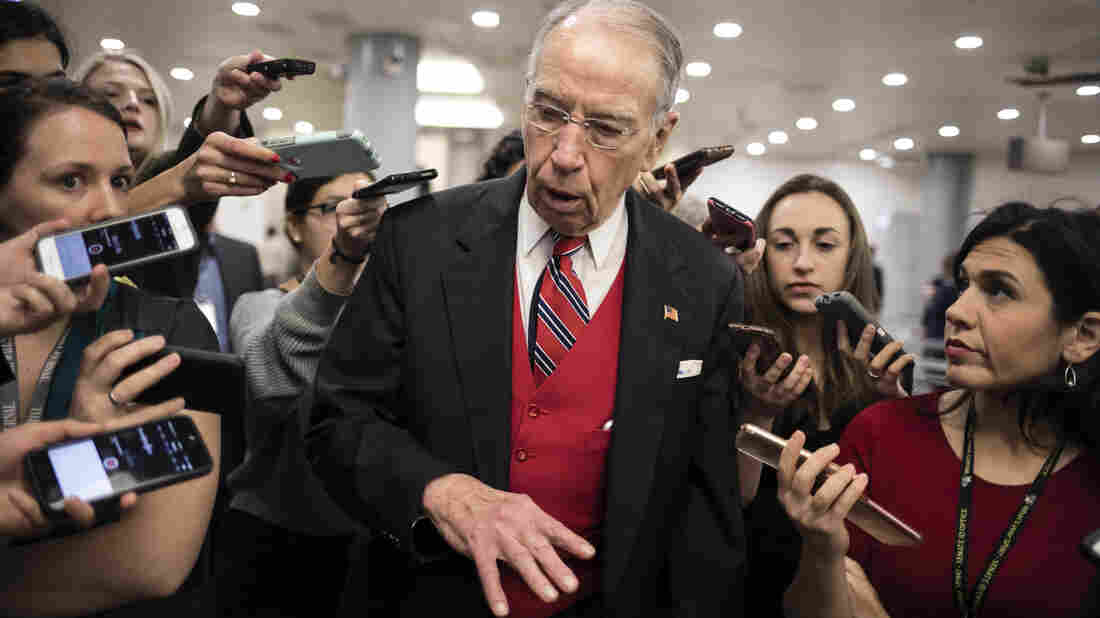 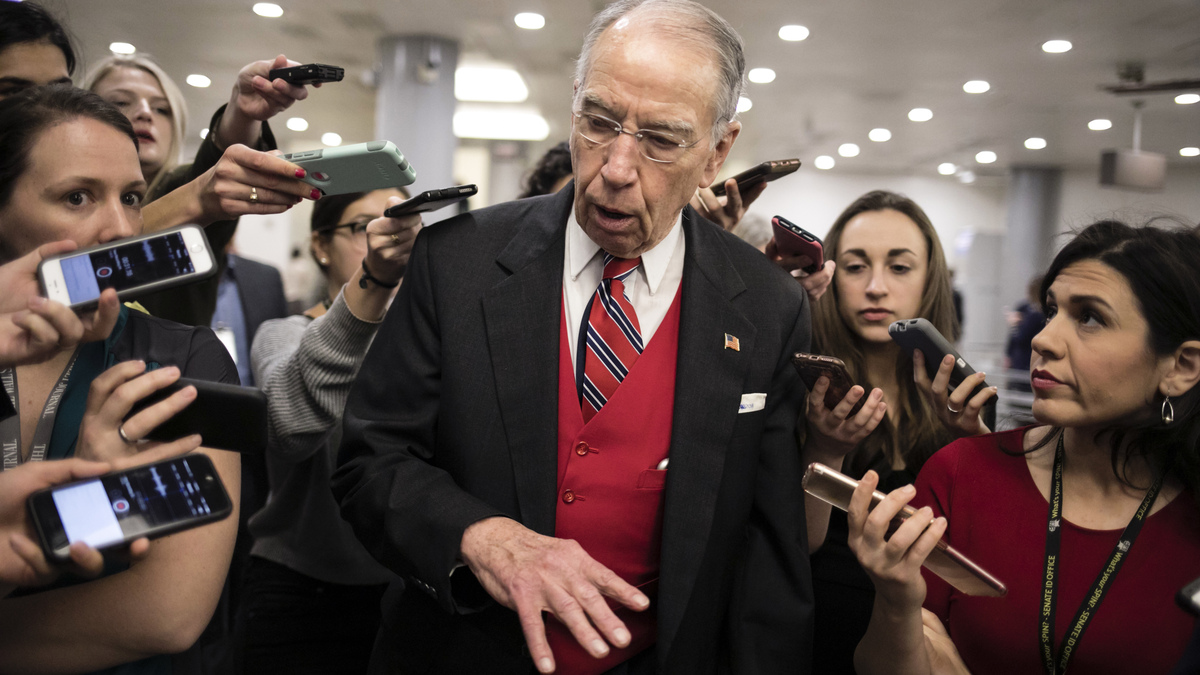 Senate Judiciary Committee Chairman Chuck Grassley, R-Iowa, speaks with reporters after a vote. Journalists' normal access is being constrained for the impeachment trial.

Correspondents who submit to an official credentialing process are granted broad access throughout the Capitol complex and usually encounter few restrictions in talking with members of Congress or others.

But now Senate Sergeant-at-Arms Michael Stenger has imposed new requirements for the impeachment trial, negotiated in part with Republican leadership:

Reporters are being confined to small cordoned-off sections in areas where unrestricted access was typically standard. They are being prevented from walking with senators to continue conversations — even when the senator involved is willingly participating.

Reporters also now may not approach senators for interviews in the halls surrounding the Senate chamber.

Taken together, the new rules effectively prevent members of the press from reaching many senators.

The Capitol is one of the rare places in official Washington where journalists get direct access to newsmakers — in this case, elected officials and their staff members.

Elsewhere, as in the White House or the State Department, for example, reporters' movements are controlled more closely, and access to principals can be severely limited.

The Senate's new security measures are unusually strict, and more restrictive even than the security protocols generally put in place for the annual State of the Union address — which is attended by the president, many members of the Cabinet and Supreme Court. The president is not expected to attend the trial.

Stenger and the Capitol Police may fear that the additional attention drawn to the Senate impeachment trial may increase risks to members of Congress. But members of the press corps are vetted through a longstanding system and pass through security checks every time they enter the Capitol complex. 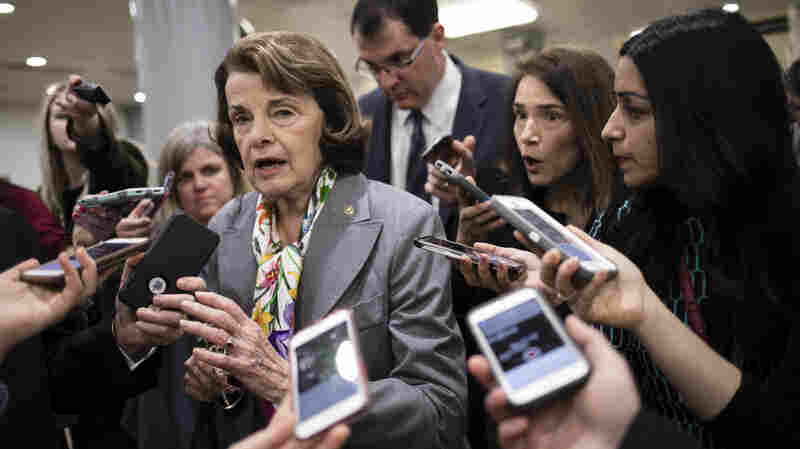 Sen. Dianne Feinstein, D-Calif., the ranking member on the Senate Judiciary Committee, is questioned by reporters after a vote. The Senate is constraining access for the impeachment trial. J. Scott Applewhite/AP hide caption 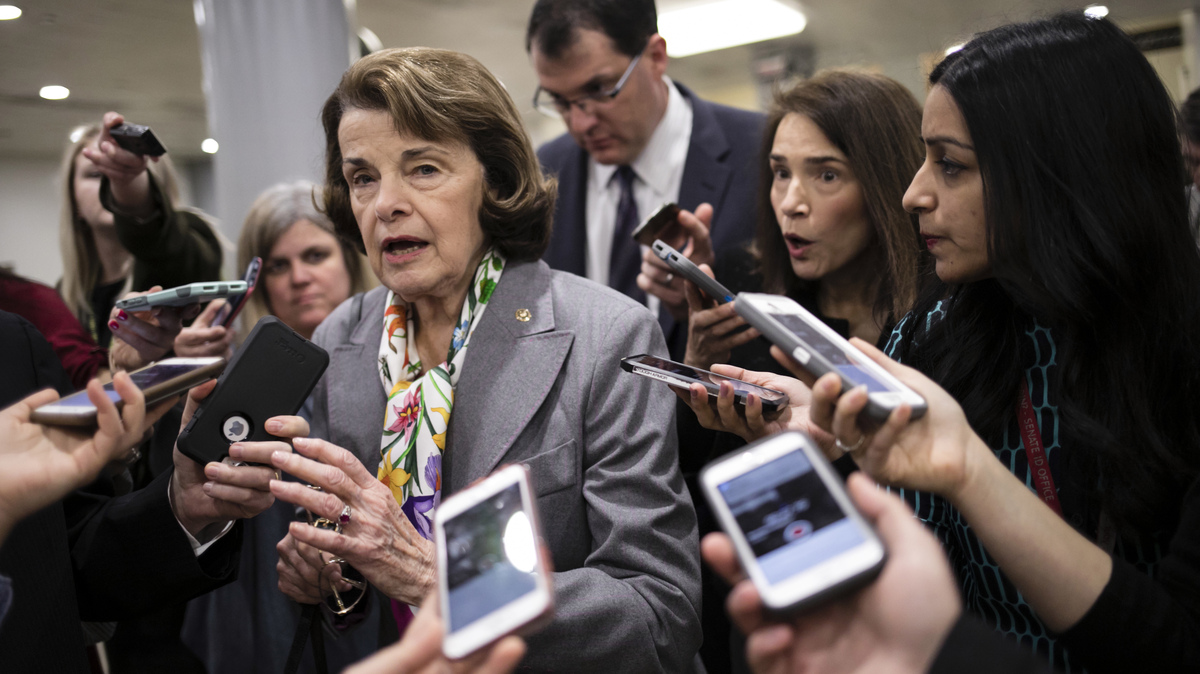 Sen. Dianne Feinstein, D-Calif., the ranking member on the Senate Judiciary Committee, is questioned by reporters after a vote. The Senate is constraining access for the impeachment trial.

Nearly 60 news organizations including NPR signed a letter organized by the Reporters Committee for Freedom of the Press on Thursday urging Majority Leader Mitch McConnell, R-Ky., and Minority Leader Chuck Schumer, D-N.Y., to relax the new restrictions on reporters.

"Absent an articulable security rationale, Senate leaders, the Senate sergeant at arms, and the United States Capitol Police have an obligation to preserve and promote the public's right to know," the letter said. "Reporters must have the ability to respond quickly to rapid developments and need reasonable access to lawmakers who wish to speak to the press."

Patricia Gallagher Newberry, president of the Society of Professional Journalists, faulted the new Senate restrictions because they deny reporters the ability to fully cover a once-in-a-generation spectacle.

"To deny journalists their constitutional right to document the historical events occurring now is a gross injustice to the American people," she said.

Angela Greiling Keane, president of the National Press Club Journalism Institute, warned that the prospect of these continued restrictions could chill reporters' ability to cover big events or even normal business in the Capitol in the future.

"These restrictions set a horrible precedent and reinforce the lie that the news media is dangerous and the 'enemy of the people,' " Keane said. "Congress should be the most accessible institution in government. As the branch closest to the people, it is ironic that these limits only isolate those who are elected to serve."

News organizations that assign correspondents to the Capitol — including NPR — are continuing to negotiate ground rules with Stenger (the sergeant-at-arms) and the Capitol Police.