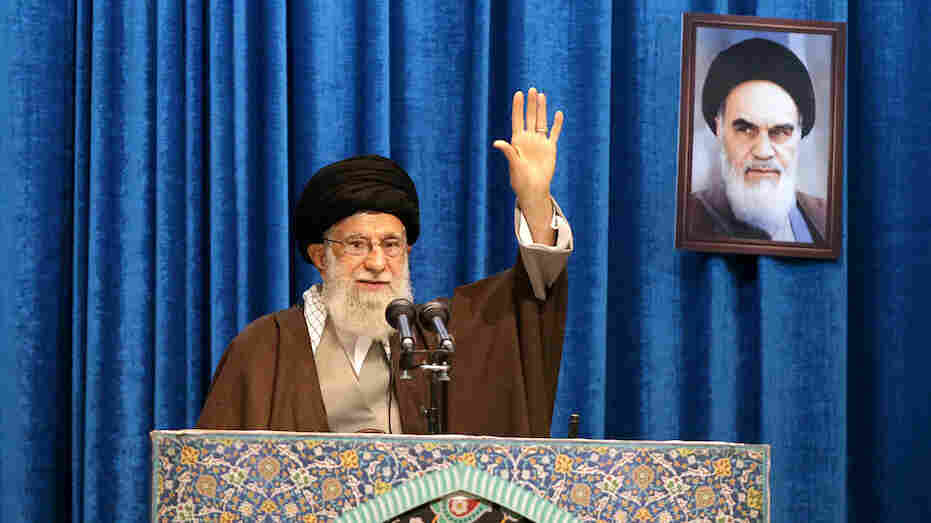 Supreme Leader Ayatollah Ali Khamenei's speech came after a period that saw mass public support after the death of a Iranian general and outrage over the downing of a commercial airliner. Official Khamenei website via Reuters hide caption 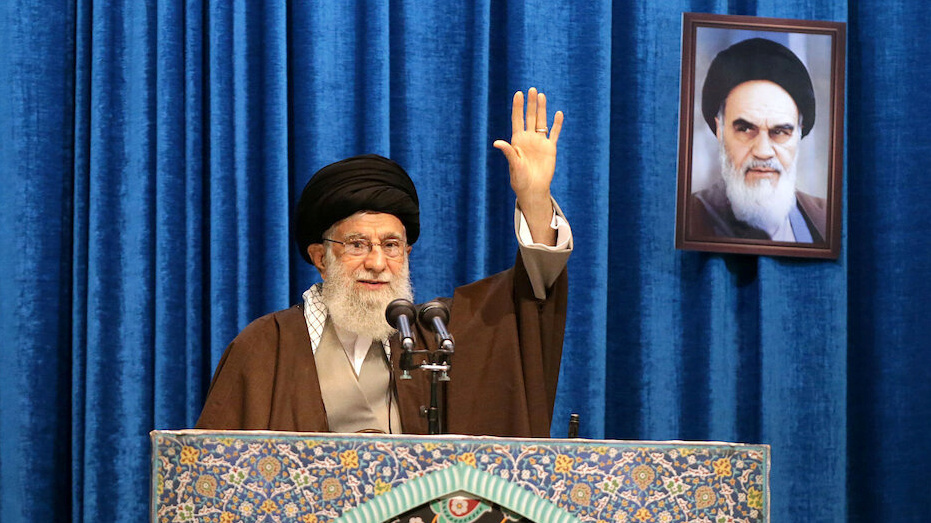 Supreme Leader Ayatollah Ali Khamenei's speech came after a period that saw mass public support after the death of a Iranian general and outrage over the downing of a commercial airliner.

Iran's supreme leader, Ayatollah Ali Khamenei, led Friday prayers in Tehran for the first time in eight years and delivered a sermon in which he excoriated U.S. leaders as "clowns" and accused European countries of negotiating in bad faith over the foundering nuclear deal.

Khamenei also indicated that Iran might retaliate further for the U.S. drone strike that killed top Iranian commander Maj. Gen. Qassem Soleimani, saying a missile attack on U.S. assets in Iraq had been a blow to America's dignity and its status as a superpower.

The address comes at a delicate time for the ayatollah. Iran's leaders are locked in a contentious dispute with the U.S., and they're facing public criticism at home after admitting that Iran accidentally shot down a Ukrainian passenger jet, killing 176 people, most of whom were Iranian.

"The past two weeks were eventful and exceptional weeks," Khamenei said, according to a partial transcript on his website. Speaking to a large crowd of worshippers in Tehran, he added, "There were bitter and sweet events for the Iranian nation to take lessons from during these two weeks."

Taking aim at recent statements by President Trump and Secretary of State Mike Pompeo in which they pledged their support for Iran's regular citizens, Khamenei said, "These American clowns lie in utter viciousness that they stand with the Iranian people."

Khamenei added, "They lie. If you are standing by the Iranian [people], it is only to stab them in the heart with your venomous daggers."

Despite the ayatollah's colorful language, as NPR's Jane Arraf reports, his overall speech was "perhaps a little bit less fiery than many would have expected." While the Iranian leader did criticize the U.S. and its allies, she says, "he did not make specific threats."

The address comes nearly two weeks after Khamenei openly wept during funeral prayers for Soleimani. The targeted killing galvanized public outrage against the U.S. in Iran and led to the retaliatory strike on U.S. personnel by Tehran – but sentiments in Iran took another turn after its military initially denied and then admitted to shooting down Ukraine International Airlines Flight 752. Angry public protests followed, including reports of live ammunition being used against demonstrators. It was against that backdrop that the plan for Friday's speech was announced.

Ayatollah Weeps And Iranians Rail Against U.S. During Funeral For Slain Commander

In his sermon, the ayatollah also addressed a recent maneuver that could lead to the reinstatement of U.N. sanctions on Iran: the complaint filed Tuesday by foreign ministers of the U.K., France and Germany. Their formal accusation that Iran violated its commitments under the 2015 nuclear deal, known as the Joint Comprehensive Plan of Action, triggers a dispute resolution process — and if that fails, U.N. sanctions on Iran, including an arms embargo, will likely return.

"The threat of the French and German governments and the vicious British government to send Iran's case to the Security Council proved once again that they are the footmen of the U.S.," Khamenei said.

After the European nations filed the complaint, Germany's defense minister said the Trump administration had threatened to punish them if they did not do so, confirming a Washington Post report of a U.S. plan to impose 25% tariffs on European cars if its allies didn't act.

"This expression or threat, as you will, does exist," Defense Minister Annegret Kramp-Karrenbauer said in response to a question about that report, according to Deutsche Welle.

When they filed the complaint, the ministers sought to distance themselves from the Trump administration's Iran strategy, issuing a statement saying, "Our three countries are not joining a campaign to implement maximum pressure against Iran."

Russia and China, two other signatories to the nuclear deal, did not join the French, British and German complaint.

Khamenei accused the European countries of having a deep history of acting in bad faith in the Middle East, and against Iran in particular.

"These three countries are the ones who helped Saddam [Hussein] as much as they could in his war against us," he said, referring to the Iraq-Iran war of the 1980s.

Khamenei told his audience at Friday prayers, "The same people who appear at the negotiating table — the same so-called 'gentlemen' behind the table — are the same terrorists of the Baghdad airport. They just change clothes."