Accessibility links
'The Base' Arrests: 4 Alleged Members Of The Hate Group Arrested In Sweep This is the second round of suspected members of The Base to be arrested this week. The group is trying to bring about the downfall of the U.S. government, according to law enforcement. 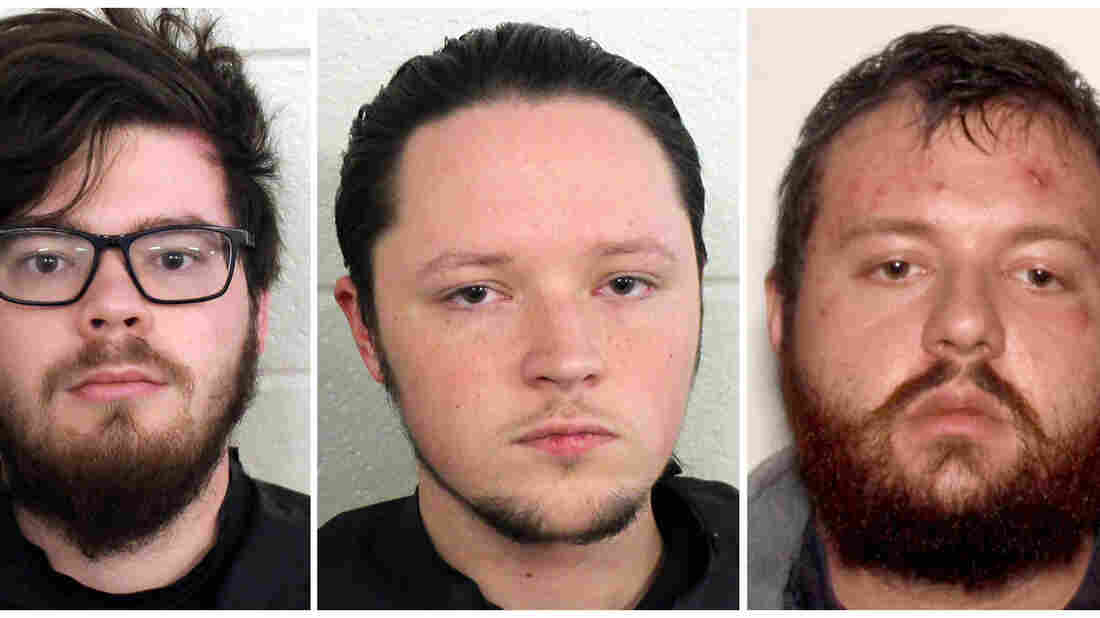 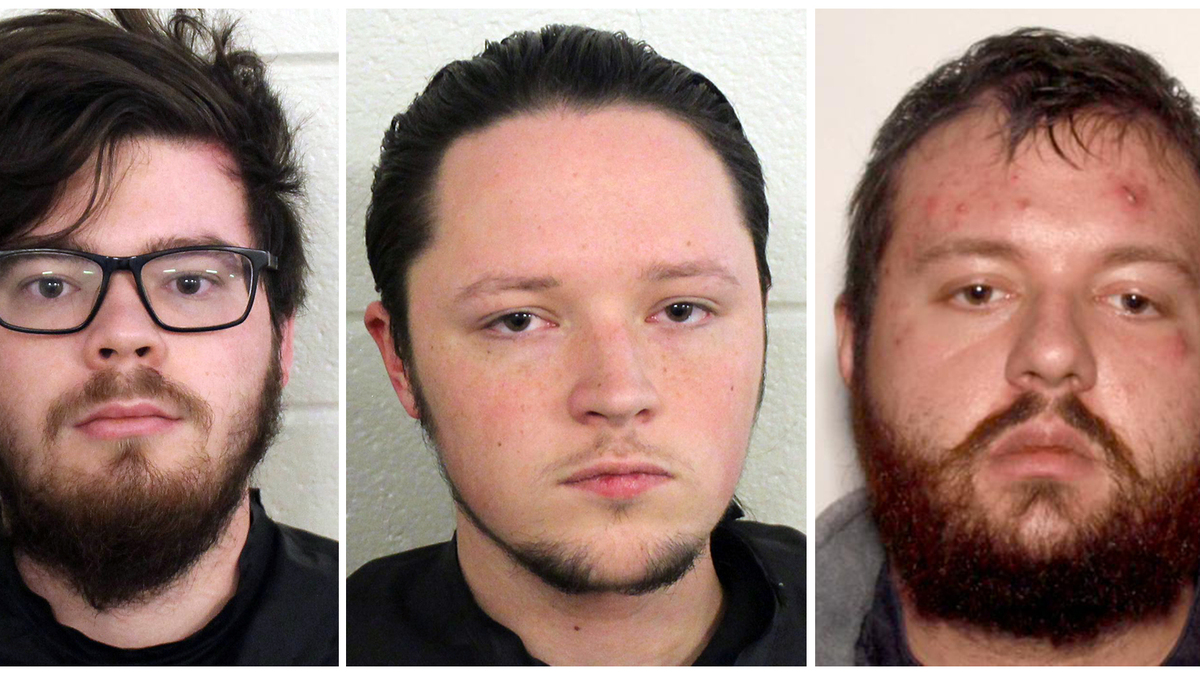 From left: Luke Austin Lane, Jacob Kaderli and Michael Helterbrand are accused of plotting "to overthrow the government and murder a Bartow County couple," according to police in Floyd County, Ga.

Police have arrested three men in northern Georgia who are suspected of belonging to a violent white supremacist group called The Base, saying that they were plotting to commit murder and that they belonged to a criminal street gang.

They're the second trio of suspected Base members to be arrested this week; the FBI announced Thursday that it arrested three other men in Maryland.

A fourth man, from Wisconsin, also accused of being a member of the group, was charged on Friday with conspiracy in connection with vandalism of a synagogue as part of a nationwide series of attacks on minority-owned properties.

The Floyd County, Ga., Police Department says Luke Austin Lane, 21, Michael John Helterbrand, 25, and Jacob Kaderli, 19, were "allegedly involved in a white supremacist group with plans to overthrow the government" and to kill a married couple whom they identified as having high-profile roles in the far-left group Antifa.

The FBI's Atlanta office "conducted the bulk of the preliminary investigation" into the group, police say. They add that while other arrests have been made across the U.S., the Georgia case is important because a "training camp and leadership was based at a home" in the town of Silver Creek in Floyd County.

The Base was founded in mid-2018 and "seeks to accelerate the downfall of the United States (US) government, incite a race war, and establish a white ethno-state," according to an affidavit prepared by local law enforcement.

The FBI successfully placed an undercover federal agent within The Base's membership in Georgia, and the agent also came to know Yousef Omar Barasneh of Oak Creek, Wis.

Barasneh apparently joined the group under the name Joseph or Josef, according to an affidavit filed in federal court. He is accused of painting swastikas and The Base's symbol at the Beth Israel Sinai Congregation in Racine, Wis.

The undercover agent interviewed online with Lane last July to gain access to the members-only chat room, the affidavit states. The next month, the agent was invited to meet with Lane and Kaderli. They searched him to make sure he was not carrying any recording devices and then asked him to follow them to a 105-acre lot owned by Lane and his father.

There, the agent was welcomed as a member. The affidavit alleges that Lane gave him "a black Balaklava hood and a Velcro Base logo patch to welcome [him] as a new member of The Base."

Lane and Kaderli allegedly then told the agent that the next day's training would "include 'retreating under fire' drills and moving-and-shooting drills," the affidavit states. The stated purpose of the drills was allegedly to prepare The Base's members for the "Boogaloo" – a name its members use to refer to what they see as the inevitable "collapse of the United States and subsequent race war."

Two months later, in October, the agent met with Lane, Kaderli and a person "who crossed into the United States illegally," identified simply as "TB Member" in the document. They spoke about their opposition to Antifa "and ultimately a veiled plan to murder an unspecified victim or victim," the affidavit reads.

"Any engagement in anti-fascist activity will carry the death penalty," the TB member is quoted as saying.

That same month, another member of The Base, Richard Tobin — who was at the time cooperating with the FBI, according to court filings — admitted that in September 2019, he directed individuals to attack and "tag the s***" out of synagogues. It was part of an event he called Operation Kristallnacht, named after the night in 1938 when Nazis in Germany ransacked Jewish homes, hospitals and schools.

Tobin told the FBI that Barasneh, who was only known as Joseph, "carried out the attack on the synagogue." He also confirmed to authorities that the 22-year-old has been member of The Base's Great Lakes cell since March 2019 and was vetted by the group's leader, an affidavit states.

Electronic devices confiscated by officials contained encrypted messages between "Joseph" and Tobin. In one, the documents say, "Joseph" sent a news article about the attack saying "something to the effect of 'here's what I did.' "

Another message from Joseph said: "Imagine if across the country on local news, everyone is reporting on new nazi presence. ... Our op will be a perfect [expletive] you to these [expletive] if we become terrorists."

The charging documents against Barasneh do not identify Tobin by name — he's called Co-conspirator 1 — but certain "details match those in the criminal complaint that was filed against him in November," The Associated Press reported.

According to the complaint filed in Wisconsin, the undercover agent also met "Joseph" in November 2019 when a group of about a dozen gathered in Silver Creek, Ga., for an in-person training. The meetup included "firearms training, grappling, medical training and a pagan 'blot' ritual where a goat was sacrificed," court documents say.

The Georgia arrests were announced on the heels of those of three other alleged members of The Base in Maryland who had built an assault rifle and accumulated ammunition and who also allegedly discussed attending a pro-gun rally in Richmond, Va., slated for Monday. The Maryland trio includes Canadian national Patrik Jordan Mathews, who entered the U.S. illegally last year.

Lane allegedly told the undercover agent on Dec. 6 that he was crafting a plan to kill two local Antifa members. During a planning meeting on Dec. 13, Lane also said he wanted to kill the person identified as TB Member and another member based in Maryland because of concerns that they would connect Lane to the planned killings, if they were carried out.

Lane, Kaderli and the undercover agent drove on Dec. 14 to the intended victims' property in Bartow County, Ga., in order to plan for the killings. Lane later laid out an elaborate plan to gain entry into the home and kill the couple. Helterbrand was brought up to speed at a later meeting and said, "This is what I've been fantasizing about for about two years now," the document states.

The group's plans were slowed because Helterbrand said he needed six weeks to recover from back surgery. They agreed to carry out their plan in late February. The affidavit ends with a description of another reconnaissance mission to the intended victims' house on Jan. 12.

The Base is allegedly organized into regional chapters, acting in a decentralized way so that those not involved in a particular criminal act could have plausible deniability.

Its members also actively agitate on social media networks. For example, one post mentioned in the affidavit said, "No need to wait until all conditions for revolution exist – guerrilla insurrection can create them. Insurgency begins as a terrorist campaign."