Accessibility links
Washington's Skagit Valley Elk Foment Tensions Between Tribes and Farmers In Washington state's Skagit Valley, a conflict is unfolding between Native Americans and farmers. Elk are making a comeback there. Local tribes are thrilled, but the agriculture industry is not. 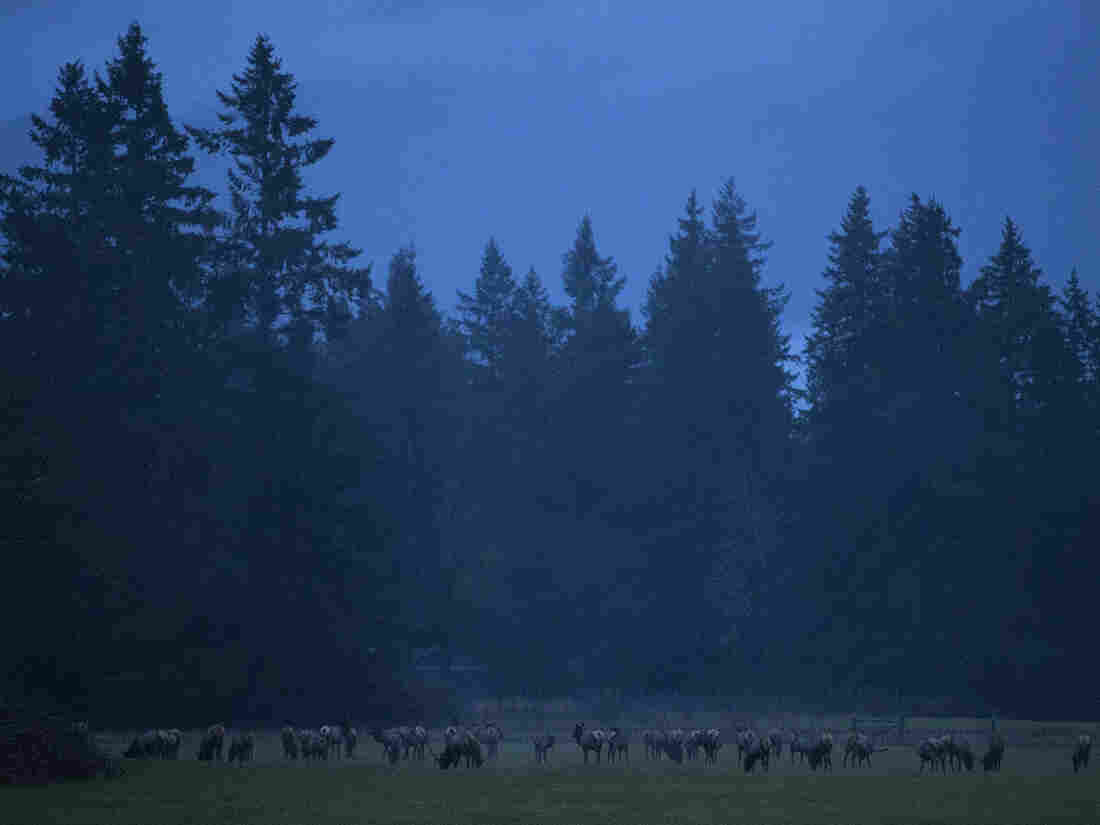 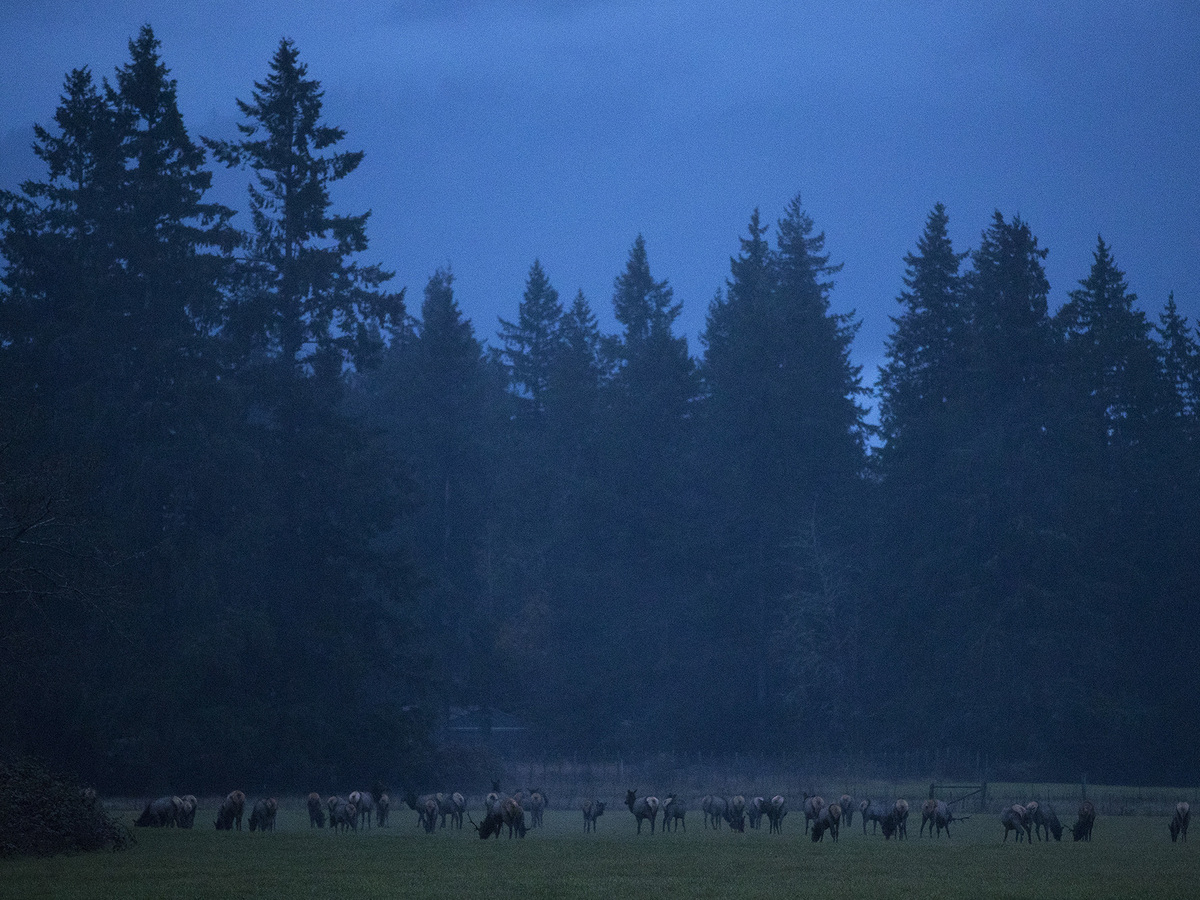 Elk graze in Skagit Valley, an area north of Seattle, Wash., populated for centuries by Native Americans and, more recently, by farmers.

Just after sunrise, elk are grazing in a misty field in Washington's Skagit Valley, an hour and a half north of Seattle.

"It looks like there are roughly 40 animals there," says Scott Schuyler, a member of northwest Washington's Upper Skagit Tribe.

These elk are at the center of a conflict that's unfolding between Native Americans and farmers in northwest Washington. After being nearly wiped out in the late 1800s, the animals are making a comeback in Skagit Valley. Local tribes are thrilled, but the agricultural industry is not.

Schuyler grew up in the suburbs south of Seattle, but, when a court decision reaffirmed his tribe's right to hunt and fish in the Skagit Valley, his family moved back to their ancestral home.

Schuyler remembers hunting his first elk in 1987, when he was 24 years old.

But, Schuyler says, some of the Skagit Valley's farmers and ranchers were not happy that tribal members were moving back, claiming their rights. 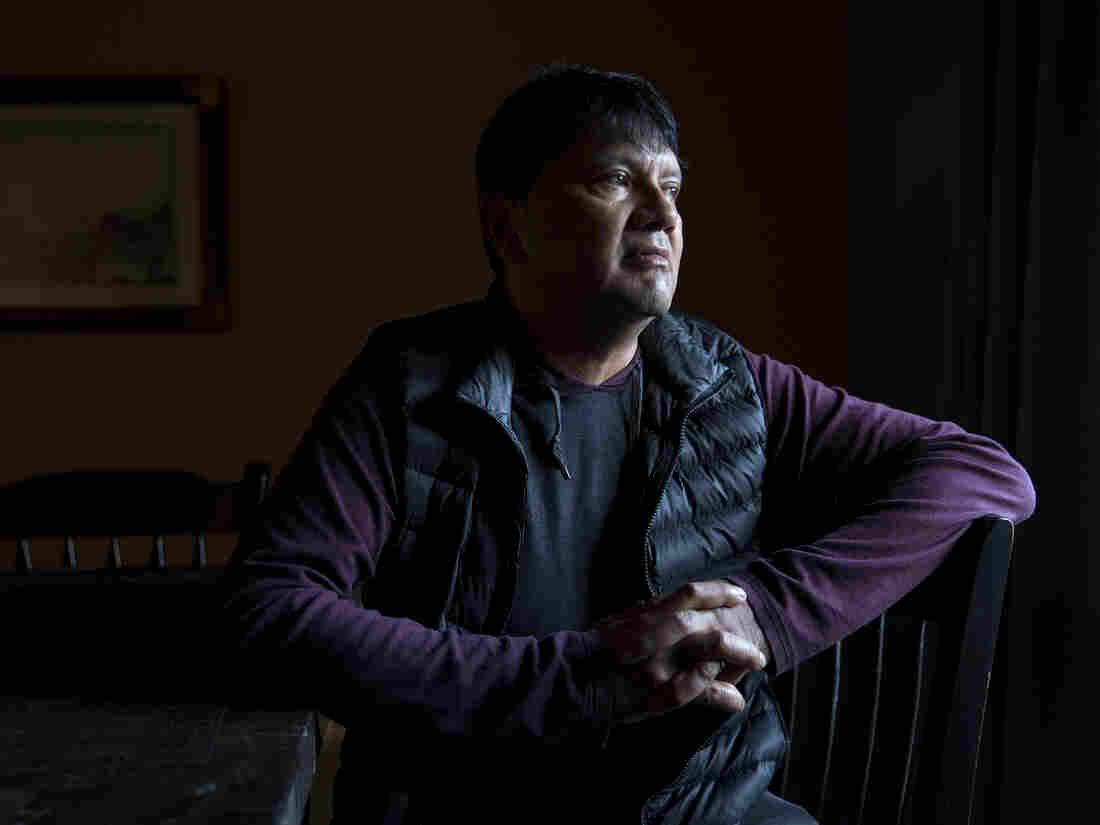 Scott Schuyler is a member of the Upper Skagit tribe. He remembers hunting his first elk in 1987, when he was 24 years old. Megan Farmer/KUOW hide caption 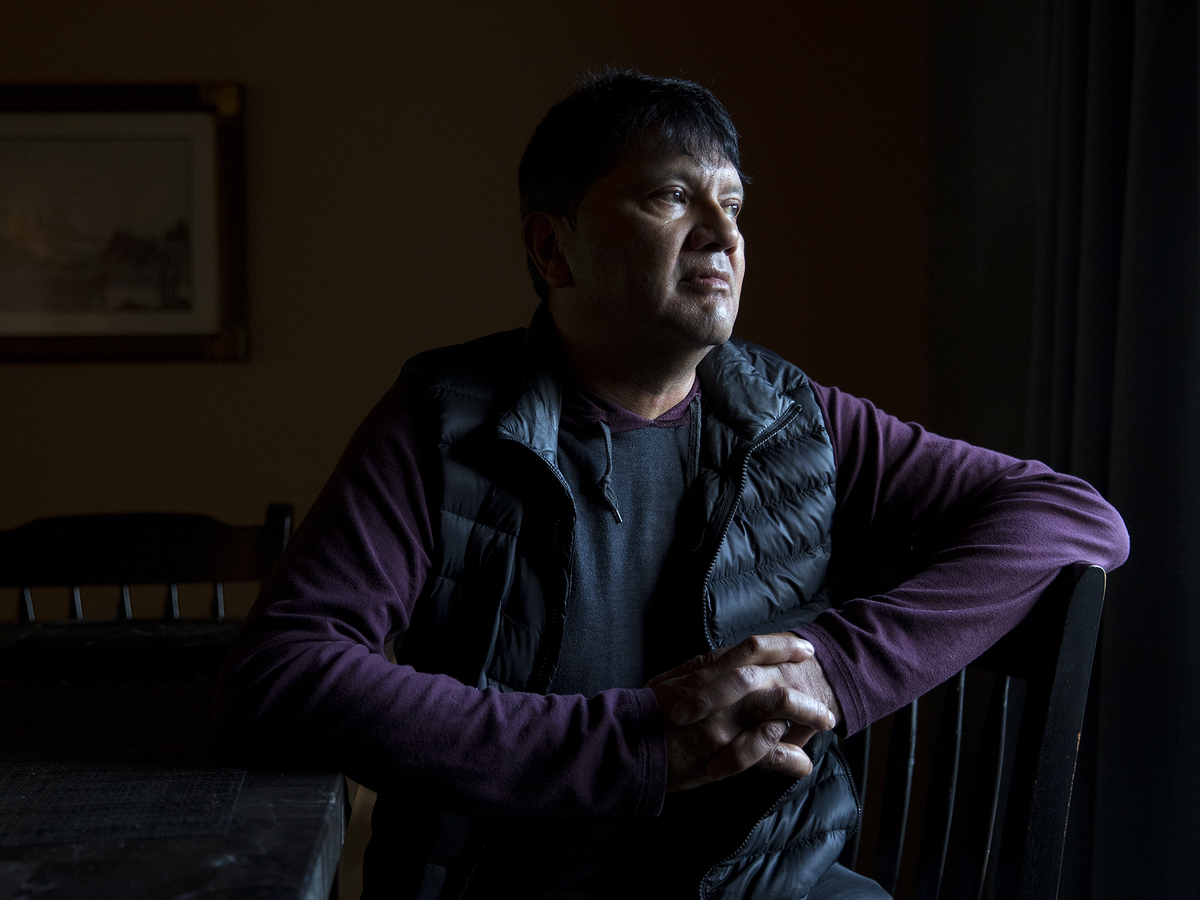 Scott Schuyler is a member of the Upper Skagit tribe. He remembers hunting his first elk in 1987, when he was 24 years old.

Schuyler's tribe and others are sovereign nations that have treaties with the US government that date back to the mid-1800s. Those treaties guarantee their right to hunt, fish and gather. The treaties also grant them a role in fish and wildlife management.

But Schuyler says some residents and some public officials don't think the tribe should have those rights.

"And [so] it becomes socially acceptable to attack the tribe, tribal members and tribes' rights," he says.

Not far from where the elk grazed in a pasture in the early morning, Eileen and Randy Good have worked as dairy farmers and cattle ranchers for more than four decades. The Goods both grew up in Skagit Valley.

Now, Eileen Good says, the elk are "making it impossible for us to survive as a farmer."

She says the elk knock down fences, eat up pastures and destroy crops.

"I figure we have lost like $36,000 a year due to the elk crossing and wrecking the fences all the time," Randy Good says.

He points to a Skagit County Assessor's report that says elk are causing $1.4 million of damage in the valley every year. That number relies on farmers self-reporting the damage, but no one doubts the loss is real and widespread.

Bill Schmidt is president of the Skagit Valley Farm Bureau. He objects to any tribal involvement in elk management. 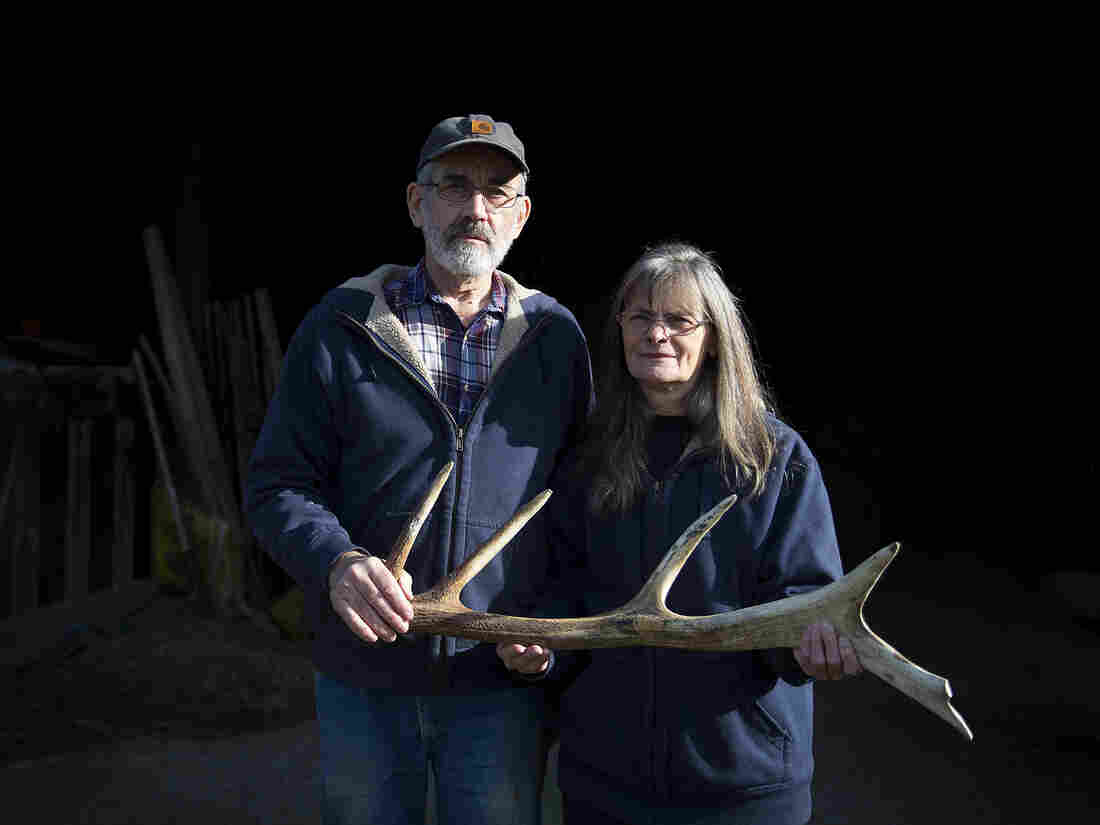 Randy and Aileen Good have farmed in Skagit Valley for four decades. They say elk have damaged their farm and farm equipment. Megan Farmer/KUOW hide caption 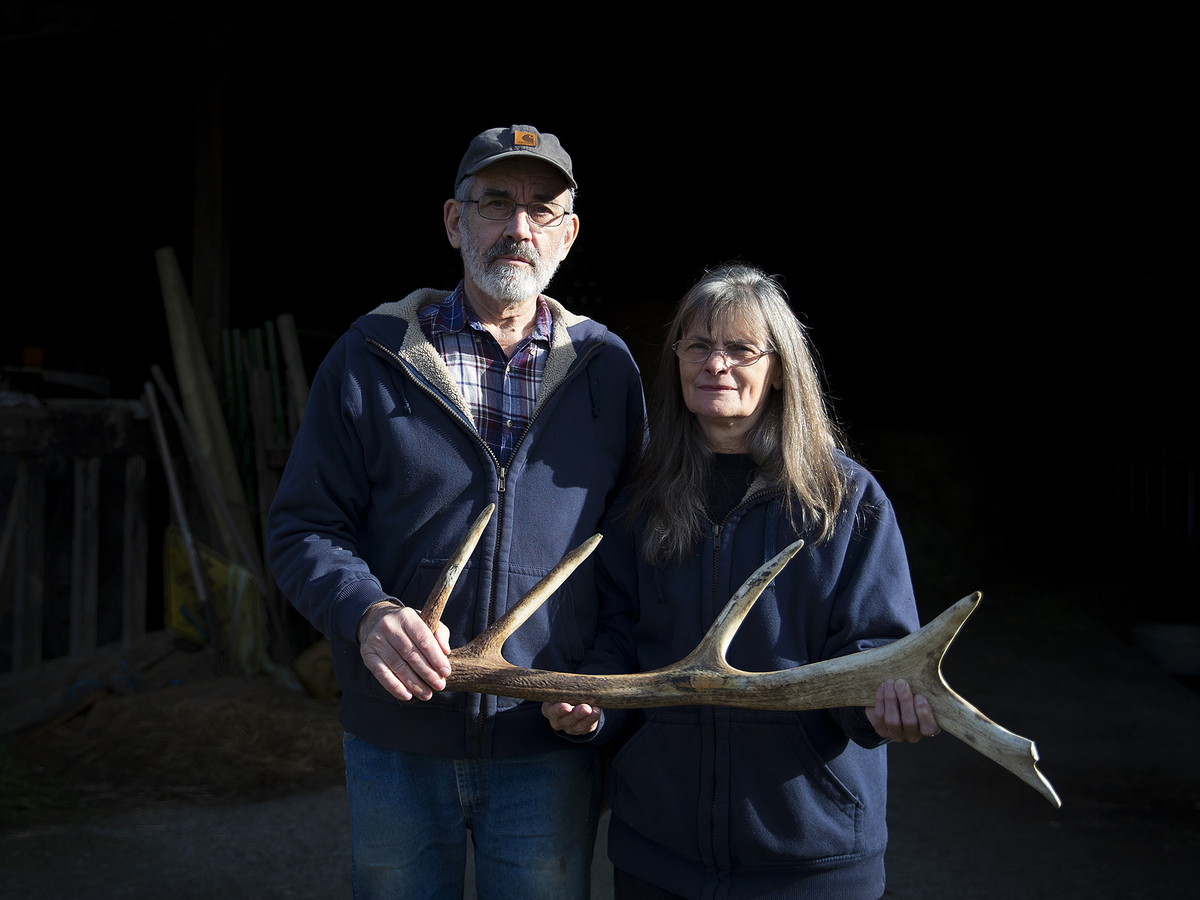 Randy and Aileen Good have farmed in Skagit Valley for four decades. They say elk have damaged their farm and farm equipment.

"I mean, it's like one percent or less of our population is controlling the management of the elk," he says, "and it doesn't seem right."

And those who were there, he says, "They were not into deer and elk. They were basically fishermen."

Historians say that claim is incorrect.

But, for Schmidt, this is about something beyond the specifics of deer and elk and fish.

"They're claiming all these rights because it's an easy way to have extra rights," he says. "I think they should be more forthright and try and be — to me — more American."

The Washington Department of Fish and Wildlife is trying to bridge the divide by keeping elk away from farms, reimbursing farmers for losses and shooting problematic animals.

Wildlife officials will be spending the next three months counting and collaring the Skagit Valley's elk. Their goal is to minimize conflict while also growing the herd to a more robust population.

Tribal member Scott Schuyler says compromise is difficult because of the pervasive belief that neither elk nor tribes belong in the valley.

"We made this deal with the United States," Schuyler says. "It was like, 'OK, well, you're giving up your land, but, you know what? We'll let you continue fishing and hunting.'"

"Those same rights are under attack."